Growing up on a North German farm, I never met any Jews before I started studying classical piano at music conservatory. Two Ashkenazi students (male and female) from England were part of my class, and over the years, we interacted several times like students do, in a friendly, fun manner. I remember having accompanied a Jewish girlfriend at her Passover diet, eating a lot of matzah bread, fruits and vegetables. I was endlessly curious about life and people, like many young Whites are.

The never-ending brainwashing coming from German education, media, and politics infusing hereditary guilt into young German minds let me believe that I had to be particularly nice to Jews because we owed them something without being able to ever make it up to them. I still believed that the crimes committed by our ancestors were so unique and horrific, only allowing us to permanently beg for atonement that could never be obtained.

During my business studies in Berlin, I befriended a woman with a Jewish father. Her German mother had converted to Judaism, but she explained to me that Orthodox Jews would not accept her as properly Jewish as Judaism was passed from the motherâs side, through the blood. Given that pater semper incertus estâthe father is always uncertain, only a Jew with a Jewish mother could be considered fully Jewish. I wondered already at the time how a child descending from five generations of marriages would look and feel like, if it started out with a Jewish mother and a Nordic father in the first generation, with the offspring continuing to marry Nordics in the subsequent four generations. Would the 3.125% of leftover Jewishness coming from their motherâs line still suffice for them to be considered as full Jews by the community? A question I still have to find the answer for today.

However, I clearly understood already at the time that Judaism was based on genetics and that religious dogma and ritual were mere ancillaries.

One evening, this half-Jewish acquaintance took me to a kiddush. We entered a big locked portal and joined a group of approximately 20 young Jews that had built up tables and chairs in the large courtyard, and dined on exotic food and sung songs in Hebrew language. They all spoke German perfectly, but I noticed that these young Jews had a second identity based on a culture that was neither German nor European. In fact, it was a culture that was completely alien to me. The looks of some who apparently did not approve of my presence are etched in my memory. I was clearly not one of themâmy tall, Nordic physique invited them to ask where I was from. I felt like an intruder, which I actually was thanks to a half-Jewish girl being disloyal to her tribe by breaking the secret of this exclusive gathering. My thought was, would a full Jew have broken it?

On a Saturday/Shabbat, this adventurous young half-Jewess took me to a service at a synagogue. Men and women were seated separately, men in the basement, women on a large balcony behind.

Like at the kiddush the night before, seeing so many Jews in one place, I noticed a phenotype resemblance. Some looked a bit like Germans, but most had very distinct traits that were hardly to be found in German faces and morphology. I noticed a generally smaller body height, a relatively large head compared to the body, shorter extremities in ratio to the torso, slimmer shoulders, larger hips, big ears, wavy lips, a large sometimes hooked nose or just a long nose tip, fleshy nostrils, light skin but dark often curly hair including dark body hair on the hands of the men. Many men as well as women were chubby and not athletic looking. The men were all dressed in black with white shirts, sometimes wearing a large black hat, occasionally with side locks (payots).

There were also some dark or medium blondes, also with light eyes. Still, other typically Jewish features revealed hybridization without full belonging to the Europid, White Race.

During my childhood and until the end of my classical piano studies, I had spent over 12,000 hours putting black dots into music, making that abstract world my mental home. My musically trained mind captured all these details as raw data without being able to assess them.

However, it was obvious, some looked quite like us, the result of interbreeding, while some looked pretty foreign. A genetic study I discovered much later came to me as no surprise. 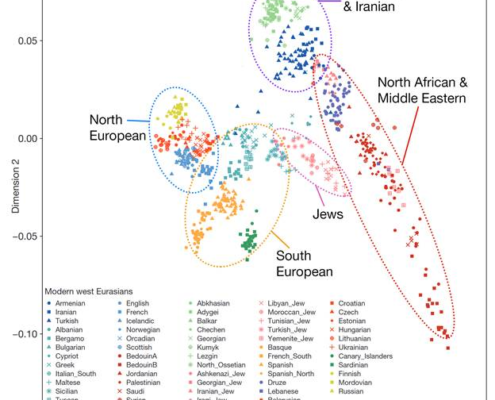 Many years later, after having met dozens of Jews in Paris, I started to connect some dots, the first one being that a noticeably distinct group which White Europeans are not allowed to criticize without risking public shaming must somehow dominate our societies. The eternal victim status gave Jews an incredibly effective moral superiority whilst we Germans had to deal with the fifth generation of eternal collective guilt which was passed on genetically, despite the fact that the legal system of the Federal Republic of Germany would not consider a serial killerâs son guilty at birth: A double standard hidden in plain sight.

My soul longed to be part of an appreciated group of people who would proudly sing their songs and declare their love for their people and country. Like many Germans, I was looking for a safe space of self-love to feel good about myself. In France, I enjoyed the amour propre of the French people as well as their flattery.

The love for classical music made me enter Jewish circles again, where Ashkenazi and Sephardi mingled. Luxurious Parisian apartments, intelligent conversations, eloquence, politeness, cultivated appearances, all this was agreeable. When I met my half-Jewish very European looking and comfortably wealthy ex-husband, I still thought that Jews from Europe and White Europeans were distinct groups that shared a big intersection of interests. There were too many similarities and common passions about culture and lifestyle to think otherwise. It took me years to understand that all this is nothing if the most important ingredient is missing: Tribal Loyalty.

To get to this point, I studied the (half-)Jewish mind âon the pillowâ but also in social settings. Without going into details, my awakening climaxed at a dinner in December 2017. I had already been working for WhiteDate, secretly, because I felt that my spouse would not approve, so I let him believe that I continued to work on projects for clients.

A Sephardi friend of ours joined us for dinner, we had lots of wine and the conversation evolved into a disagreement between them and me about gun rights in the USA. I saw the right to bear guns as a necessity in an increasingly unsafe environment due to immigration. I expressed my sorrow about the farmer killings in South Africa by mentioning that the Boers were OUR people and Western governments should help arm them if not offer asylum.

What had I said? My reference to âOUR peopleâ made my then-husband and our guest go into strong opposition. It was racist to say such a thing. My argument that the Afrikaners were of German and Dutch stock, which made me feel for their suffering was completely rejected. There was a common understanding between my half-Ashkenazi ex-husband and our Sephardi friend that little-German-me should not see myself as being part of a racially united global White Nation.

If Jews had been killed en masse (or even just one) by Blacks in South Africa, I am certain that both of my conversational opponents would have deplored it by stating full allegiance to the Jewish Nation worldwide. This double standard came to me like a shock. Not being for the same football team is one thing, but not being for the same tribe, people, race is quite another. They clearly did not care for the wellbeing of MY people, the White People, for whom I naturally felt allegiance to, wherever they lived. Even worse, they did not care that White people were being murdered because they were White. Nor did they care about the right of White people to defend themselves.

Needless to say, this was the beginning of the end for my marriage. Whatever had united my spouse and me was just not important enough anymore. Six months later I had left my luxurious international lifestyle behind, moved back to Germany and the divorce petition was announced.

Since then, my awakening has been refined by learning more about Jewish responsibilities in the horrific Ukrainian, Armenian, Bolshevik Russian, and Stalinist Russian genocides of Whites during the twentieth century alone. Some even add the 80 million dead Whites of WWI and II including the 1â1.5 million German prisoners of war, young beautiful German soldiers, cruelly left for months to rot alive and die slowly in the mud of the Rhine meadows fields without any shelter against rain and cold. Additionally, 12 million German civilians including many women and children were tortured, raped, killed, and starved to death after 1945.

I am also aware of the Mao genocide of 40 million Chinese equally, but feel distanced from this historical happening as I care for my people first. Let the Chinese mourn their own and free themselves from these satanic infiltrators. Whites cannot fight other racesâ freedom wars whilst we are genetically vanishing under todayâs anti-White governments and techno-medico-communism called Corona pandemic.

Last but not least, I have two messages to the so-called âgood Jewsâ among whom I count my former spouse: Even Jews who do not actively participate in the secret Jewish nepotism and anti-White actions must understand that their denial of other races to practice the racial in-group preference and loyalty they instinctively practice themselves will eventually provoke hatred of all peoples against them as a collective. One day, the Jewish nation will reap the fruits of its actions.

Liv Heide works on WhiteDate.net which notes âWe know where we came from, where we belong, and wish to share the feeling with like-minded partners. We understand that common cultural heritage helps romance to develop in mutual harmony and commitment. We want long-lasting love, marriage, and families with numerous healthy children. Call us â¦ eccentric. The Transformation of Europe as an Elite Project
Review of The Blackening of Europe, by Clare Ellis
Andrew Joyce
• 151 Comments • Reply
Hide 46 CommentsLeave a Comment
"Studying the JQ "On the Pillow""
• 46 Comments
Commenters to Ignore
Commenters to ignore (one per line)

Subscribe to All Liv Heide Comments via RSS
PastClassics