The widespread perception of Solzhenitsyn as a figure inseparable from the vanished world of the Cold War has become an obstacle to appreciation of his works. To some extent, an earlier generation of his Western admirers contributed to this misunderstanding: e.g., many Cold War conservatives were dead set against any discussion of race, which would make it impossible to apply any of Solzhenitsynâs insights to our struggle against todayâs racially-obsessed Left. Once I shared an article relating Solzhenitsyn to current American politics with a distinguished Solzhenitsyn scholar. His response was unfavorable: Solzhenitsynâs principal concern was with his beloved Russia, and so citing him in an article on current American politics amounted to âinstrumentalizingâ the author for ends alien to his own. Of course, Solzhenitsyn had made strenuous efforts to get his message out to the West, knowing that we love our countries for the same reason he loved Russia, and that there was absolutely nothing âRussianâ about the kind of thinking behind Communism, which can be found all over the world.

Orthodox Marxism-Leninism never exercised any appeal in the United States, but a variant developed by the Frankfurt School, now widely referred to as âcultural Marxism,â has become the de facto ideology of the American State. It is admittedly not identical to classical Marxism: In the new way of thinking, the villains are European-descended people who behave in evolutionarily adaptive ways rather than greedy capitalists squeezing surplus value out of the toiling masses (indeed, capitalists are now among the most reliable champions of cultural Marxism). But the two ideologies have clear common roots, tell similar stories about supposedly oppressing and oppressed groups defined a priori, and (most importantly) were developed by the same sort of people motivated by the same unquenchable resentment of European civilization and the people who created it. History does not repeat itself, but it often rhymes, and with due caution in recognizing differences in historical situations, there should be much in Solzhenitsynâs struggle against Communism which can instruct us on the nature of our present-day enemies and how to fight them.

To take one example, many in the West are unaware that the same anti-majoritarian animus Americans are experiencing today was prefigured in Solzhenitsynâs homeland, where the revolution was more anti-Russian than Russian. As the author recalls:

During the 20s the very understanding of Russian history was changed â there was none! And the understanding of what a Russian is was changed â there was no such thing! . . . I recall from my school days that even the word âRussian,â such as âI am a Russianâ sounded like a call to counter-revolution. . . . But everywhere was heard and printed the term âRussopyati.â [an insulting epithet]

It was all there a hundred years ago except the expression âsocial construct!â

Or consider how Solzhenitsyn came to see through the apparently humanitarian ideal of internationalism:

Before the camps, I regarded the existence of nationality as something that shouldnât be noticed â nationality did not really exist, only humanity. But in the camps one learns: if you belong to a successful nation you are protected and you survive. If you are part of universal humanity â too bad for you.

Indeed, nations â meaning groups of people who share a common birth (Latin: natio), not a common passport â are biological realities which enable altruistic behavior even as they recognize the necessary limits upon it. They are part of the rules of evolutionary survival. Fantasies of universal selflessness are the preserve of the callow, or of those whose survival has never been threatened. Either white people will learn what it means to share a common birth, or we will be pushed aside by groups which have such an understanding.

So in producing a book on Solzhenitsynâs relevance to the contemporary Right, Spencer J. Quinn is filling an important need. He himself emphasizes another aspect, however: Many of the younger generation are put off by the sheer bulk of Solzhenitsynâs works. It should also be pointed out that compared with the sprawling history which was Solzhenitsynâs subject matter â the Revolution, the Gulag system, two centuries of Russian-Jewish relations â his works represent a considerable achievement of compression. But to an American generation brought up on Twitter, they will undoubtedly be a challenge. Solzhenitsyn and the Right is a good beginnerâs guide. Many of the chapters first appeared as articles here on Counter-Currents.

As Quinn notes, Solzhenitsyn was at one time among the most recognized and admired figures in the world due to his fearless battle against the Soviet authorities and his sudden, dramatic exile to the West in 1974. But enthusiasm quickly cooled when he began criticizing the West itself, and journalists realized he was ânot the liberal we had hoped for.â A primary catalyst for the shift in perceptions was Solzhenitsynâs Harvard commencement address of 1978, âA World Split Apart,â with which Quinn appropriately starts. Here Solzhenitsyn accused the West of:

Negative reaction was swift, with liberals declaring Solzhenitsyn a âRussian Ayatollah.â As Quinn writes, he was thought to be recommending an illiberal political order âin which enlightened autocrats venerate God and benevolently coerce their people into living honorable lives.â In reality, much of the speech was concerned with things which lie beyond any possibility of merely political reform. Moreover, at one point he succeeded in putting his finger on the great political danger which would succeed Communism: âRelations with the former colonial world now have switched to the opposite extreme and the Western world often exhibits an excess of obsequiousness.â Presciently, he suggested that âthe bill which former colonial countries will present to the Westâ may demand not only the surrender of its last colonies, âbut of everything it owns.â Quinn comments:

But what we know now that most of us did not know then is that Aleksandr Solzhenitsyn was essentially correct. As a consequence of the societal loss of courage and the inability to escape outdated Enlightenment ideals such as the primacy of individual liberty and the equality of all men (and women), the West has commenced its own rapid collapse, just as Solzhenitsyn had prophesied. The surging influx of Africans, Middle Easterners, and other non-whites across the porous borders of Western nations has seriously destabilized their host societies through crime, terror, mafias, and grooming gangs. Further, a militant and egalitarian Left has aligned itself quite perversely with non-whites and is in the process of smashing all that is Christian, traditional, and patriotic among the Westâs founding populations â that is, the people collectively referred to as white people.

Quinn moves on to August 1914 and its treatment of Prime Minister Pyotr Stolypin, the ablest statesman of late Imperial Russia. His accomplishments included saving the country from the chaos of the 1905 Revolution and giving it its first national legislature, the Duma. Among his most cherished domestic reforms was encouraging the independence of peasant families by freeing them from the power of the peasant commune. Quinn mentions that shortly before his death, Stolypin âhad convinced the Tsar not to mobilize against Austria-Hungary over a pesky little affair in the Balkans.â One wonders how the history of the twentieth century might have been different if he had been there to do this a second time in July 1914.

Stolypin was determined that Russians should rule Russia. His influence may be seen in the royal manifesto which accompanied the dissolution of the First Duma:

The State Duma must be Russian in spirit. The other nationalities which form part of Our Domain must have deputies in the Duma to represent their needs but they must not, and shall not, appear in numbers which give them the possibility of determining matters of purely Russian concern

Try to imagine Americaâs white majority expressing itself with such confidence!

Stolypin never said or did anything against the Jews or Russiaâs other minority populations, but his very Russian patriotism made him plenty of enemies in their ranks. Solzhenitsyn depicts his eventual assassin, the Jew Mordecai Bogrov, reasoning that Stolypin must be an enemy of the Jews because he

boosted Russian national interests too blatantly and too insistently â the Russianness of the Duma as a representative body, the Russianness of the state. He was trying to build, not a country in which all were free, but a nationalist monarchy. So that the future of the Jews in Russia was not effected by his goodwill toward them. The development of the country along Stolypinâs lines promised no golden age for the Jews.

Bogrov shot Stolypin at a performance at the Kiev Opera House on September 14, 1911; he died three days later. Shortly before the assassin was hanged, notes Solzhenitsyn,

a rabbi was allowed in to see the condemned man. âTell the Jews,â Bogrov said, âthat I didnât want to harm them. On the contrary, I was fighting for the benefit of the Jewish people.â

That was the one and only part of his testimony to remain unchanged.

The rabbi said reproachfully that Bogrov might have caused a pogrom. Bogrov replied, âA great people must not bow down to its oppressors!â 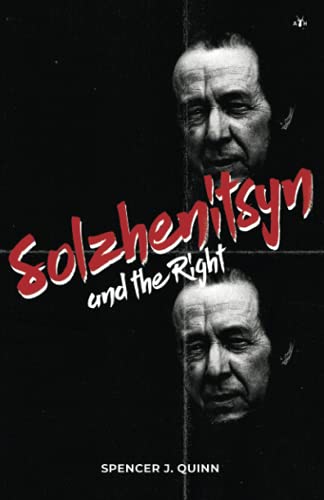 Quinn devotes five chapters to Solzhenitsynâs study of Russian-Jewish relations, Two Hundred Years Together, pointing out the pains the author was at to remain balanced in his treatment, but also the difficulty of doing so in the chapters on the Revolution and early Soviet period. Other chapters deal with Lenin in ZÃ¼rich, March 1917, Solzhenitsynâs memoirs, From Under the Rubble, and some of his early works. I hope Solzhenitsyn and the Right will succeed in its mission of introducing a new generation to this monumental literary and political figure.