Earlier by Paul Kersey: See FIRST MAN! It Depicts A Time Before America Had To Be Made Great AgainâWhen Whitey Was Indeed On The Moon 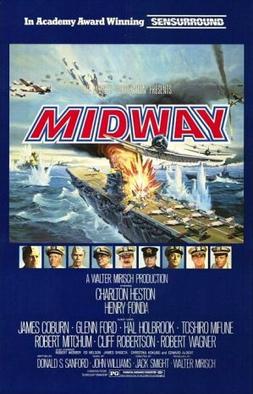 Forty-three years after Charlton Heston and an all-star cast including Henry Fonda, Glenn Ford, and James Coburn fought the cinematic battle of Midway, director Roland Emmerich has retold the story almost perfectly. And despite his Leftist politics, the German filmmaker (Independence Day, The Patriot, 2012) has offered a film about the U.S. Navyâs epic three-day, victory against Japan that you and your family must see over Christmas vacation. Midway is historically accurateâand therefore politically incorrect. Itâs nearly all-white, and the only non-whites are Americaâs Japanese enemies.

Fought from June 4-7, 1942 between the segregated and essentially all-white US Navy and the even less integrated Imperial Japanese Navy, the Battle of Midway altered the course of the Pacific War. Just six months after Japanâs surprise attack on Pearl Harbor, the American victory inflicted irreparable, devastating damage upon the Japanese fleet and gave the American military and public a decisive, truly miraculous victory to raise morale.

How devastating? The Navy sank four Japanese fleet carriers and a heavy cruiser, destroyed 248 aircraft and killed more than 3,000 Japanese sailors. The U.S. lost a carrier and cruiser, just 150 aircraft and, sadly, 300 men. The battle was fought almost entirely from the air. 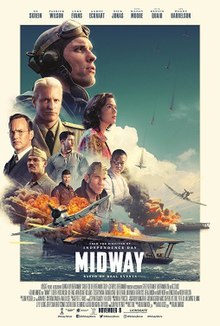 Telling the complicated tale on film is no easy task, but Emmerichâs brilliant new treatment has done it. Shot on a budget of $100 million with big funding from China, Midway documents in stunning detail how those brave white Americans of the U.S. Navy ended the Japanese threat in the Pacific [Hollywood Revisits Battle of MidwayâWith Backing From China: High-budget drama about World War II defeat for the Japanese draws funds from China despite countryâs cool relations with U.S., By Erich Schwartzel, Wall Street Journal, November 8, 2019].

The movie centers on the heroic Squadron Commander Dick Best, who seeks vengeance for the attack on Pearl Harbor in which a classmate from the Naval Academy was killed. Best sank the Akagi and the Hiryu during the battle, and the movie even allows him to get off a powerful, avenging âthis is for Pearl,â as he drops his payload onto one of the ships. Itâs a rousing scene.

Portrayed by British actor Ed Skrein, Best gets the most screen time. But he is outshined by a bevy of American actors who play heroes regrettably forgotten by our current education system, which seeks to find any and every non-white of any historical period to elevate as worthy of praise. (Remember Hidden Figures?)

Patrick Wilson plays Edwin Layton, the Navy Intelligence officer who tried to warn his superiors of a potential attack on Pearl Harbor. His guilt over the attack fuels his drive and tenacity in working to track the movements of the Japanese fleet and position the American aircraft carriers for a hammerstrike and a decisive victory. Unquestionably, Wilson is the star of the film, portraying one of those true American patriots regrettably never recognize for his contributions while heâs alive. You leave Midway clearly understanding heâs one of the unsung, true heroes of the war. (You might want to read Laytonâs war biography, âAnd I Was There.â )

Woody Harrelson depicts Admiral Chester Nimitz admirably, but you wish Dennis Quaid, who plays Vice Admiral William âBullâ Halsey, had more of the script. Then again, the movie is accurate on that point as well. Halsey was in the hospital with a flaming case of the shingles during the battle.

In a perfect world, Midway would work as the first movie in a shared storyline like that in the Marvel Cinematic Universe, where weâd get to see what else Layton, Nimitz, Halsey, and other heroes contributed to victory.

One of them was Lt. Col. Jimmy Doolittle of the U.S. Army Air Corps, played by Aaron Eckhart in what amounts to little more than a cameo. Early on, Midway shows his daring raid on Tokyo shortly after the surprise attack on Pearl Harbor. There would be another follow-up film that would, like Midway, replace another oldie, Thirty Seconds Over Tokyo. Eckhart as Doolittle, taking Spencer Tracyâs role, would be incredible. The surpassing bravery of those men is yet another forgotten tale from the war.

On that note, in detailing the exploits and lives of the characters after the battle Midway, Emmerich gracefully observed that Dick Cole, the last surviving airman who flew in Doolittleâs Raid, died in 2019 [Richard Cole, 103, Last Survivor of Doolittle Raid on Japan, Dies, by Richard Goldstein, The New York Times, April 9, 2019].

As with any film that recreates a major historical event, Midway can only tease the audience with a brief look at these remarkable men. But what a teaser it is!

Now, hereâs the refreshingly wonderful thing about the film: In a time when we are only supposed to remember the Navajo Code Talkers, black Navy stewards, the 442nd Regimental Combat Team, and the fictitious derring-do of the Tuskegee Airmen, Emmerich did not insert superfluous diversity to bolster the otherwise monochromatically white American military.

Indeed, the only diversity in the movie on the side of the Americans, is seeing Dorie Miller, the black navy steward who manned a gun on December 7, 1941, receive the Navy Cross. But you only see him from behind. Where Michael Bayâs $145 million Pearl Harbor (2001) made Cuba Goodingâs Miller an integral character, Emmerich left him out, perhaps on the cutting-room floor.

Even more refreshing is hearing the Americans in Midway call the Japanese âJapsâ without flinching or hesitation, particularly at a time when the Disney Plus streaming service adds a disclaimer, âoutdated cultural depictions,â before old movies [Here Are 5 Movies Disney Plus Put âCulturalâ Warnings On, by Lisette Voytko, Forbes, November 13, 2019].

Modern Politically Correct sensibilities would confuse those brave men who fought in World War II, and Midway doesnât shy away from the fact the white men depicted in the movie werenât fighting for America as an idea, but for the United States of America as an actual nation and a distinct people. Dick Best sought vengeance because the Japs attacked his home and killed his friend, not because they didnât care for his ideas.

Unsurprisingly, while Midway is a hit with audiences, critics give it the thumbs down. Its Rotten Tomatoes critics score is just 43 percent, but it boasts an audience score of 92, another reminder of how elite cultural opinions fail to reflect those of your average movie goer.

Disgustingly, The Hollywood Reporter attacked the movie, not-so-subtly observing that whites who celebrate the old America are dying, which means the retconning of World War II into a morality play on the Holocaust is all but complete:

Questions of quality aside, how large is the potential audience in 2019 for a movie like Roland Emmerich’s Midway? There seems to be an endless appetite for films exploring the Nazi horrors that made fighting World War II necessary; and artists like Christopher Nolan will likely continue finding new ways to reframe this combat for contemporary sensibilities. But how many people want staunchly old-fashioned pictures like Midway, which simply use modern digital tools to re-enact narratives America has been telling itself since the 1940s? Even what was once known as the History Channel appears mostly to have moved on from this stuff (and from history in general) â perhaps because the demographic that clings to romantic notions of a âGreatest Generationâ shrinks by the day.

Those who cling to âromantic notions of a Greatest Generationâ are also those who tend the dwindling fire of the Historic American Nation. But even dying embers can be perilous and quickly become a conflagration.

Thatâs why Midway is dangerous and why the critics donât like it. It unapologetically shows that an authentic United States of America once existed, where mandatory platitudes such as âdiversity is our strengthâ were unheard. 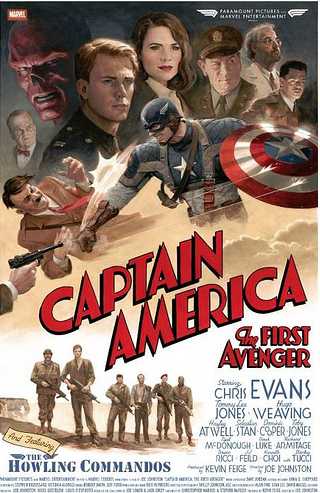 Hollywood Reporterâs DeFore needs to learn how honored the battle was in the years after it was fought. Chicagoâs Midway Airport was called Chicago Municipal until 1949, when it was renamed to honor the battle and the men who fought in it. Given that the war was in some sense a racial conflictâwhite Americans against yellow Japaneseâone wonders why Social Justice Warriors havenât pushed to rename the airport.

This Juneâs 78th anniversary will see us just 22 years away from the battleâs centenary. Will the airport will keep its name till then? After all, about the only World War II âheroâ those cultural and historical illiterates would recognize or care about is the fictional Steve Rogers, aka Captain America, and only because he famously gave his shield to his black, putative replacement, Falcon, at the close of Avengers: Endgame.

Well, Midway will remind Historic Americans that their nation was never a âpropositionâ where âdiversity was our strength,â but an actual country for which they had a duty to fight and dieâand that whites did most of the fighting. HBO's "The Plot Against America"
E. Michael Jones
• 294 Comments • Reply
← Tired of Hollywoodâs Woke, and Failin...
Hide 33 CommentsLeave a Comment
"See MIDWAYâIt Shows the Historic American Nation At Its Most Heroic!"
• 33 Comments
Commenters to Ignore
Commenters to ignore (one per line)