Before I proceed in addressing some issues that Paul Craig Roberts raised in his article, partially addressed to me and Andrei Raevsky (aka Saker), I want to express my profound admiration for Dr. Roberts and his courageous civic position and his real, not for show, American patriotism. It is an honor and a privilege to be engaged in conversation with such an esteemed person, even when I disagree with him in some aspects of geopolitical reality when related to, the now official, Cold War 2.0 between the United States and Russia, and Russia’s posture in this conflict. Dr Roberts writes:

Here is where I and Paul Craig Roberts differ dramatically on the issue of Russia’s strategy. Yes, I agree with Dr. Roberts that, quoting William Fulbright, “words are deeds and style is substance insofar as they influence menâs mind and behavior”. But while insults and provocations are unpleasant and in some cases do influence mind and behavior of some, with modern day Russia it is different. I already laid out some basics of Russia’s strategy here at Unz Review, I will expand a bit more in answering Dr. Roberts’ undeniably valid question.

The 19th Century classic Russian fable writer Ivan Andreevich Krylov, among many outstanding fables, which Russian children are subjected to in their Russian Literature course and carry them into their adulthood since the early 20th century, has one which describes current geopolitical reality perfectly. The fable is The Cat and The Cook in which the Cook, after having had it with his day and escaping to the tavern, leaves his cat to guard the food (chicken) against mice. As the fable goes, upon his return from tavern he sees all the results of the cat “guarding” his chicken–the cat finishing eating it. The cook breaks into shaming the cat–most of the fable is the cook’s monologue about cat (Vas’ka) being bad, arrogant, irresponsible and evil. The closing lines of the fable sum the situation succinctly:

But, while he kept talking,
The cat ate up the whole chicken.

Now, I would tell this kind of cook,
And would ask him to write this on the wall…

To make your speech less a waste,
You’ve got to use your power.

And here is the point–the United States cannot use this power against Russia without being annihilated itself, while Russia, as this proverbial cat Vas’ka continues to eat, against the background of a loud talk and nothing more. This reality, in a very both desperate and powerless manner, finally dawned on many in Washington. As Graham Alison notes:

However demonic, however destructive, however devious, however deserving of being strangled Russia is, the brute fact is that we cannot kill this bastard without committing suicide.

This is some progress in 2017, finally, when “esteemed” members of American geopolitical “academia” begin to grasp at least some limitations of their, grossly inflated to start with, power. This IS the progress, once we recall where the world was even in 2013. Despite wiping the floor with globalists’ stooges from Georgia in 2008, Russia still wasn’t taken too seriously by the globalist cabal in Washington. As late as 2014 all kinds of US military “experts” described a bulk of scenarios in which victorious US and NATO Armed Forces smash conventionally Russian Army in Ukraine. It was self-medicating against the background of Russia’s lightning speed operation in Crimea which forestalled US actions in turning Crimea into the NATO base. Russian counter-stroke caught everyone off-guard. How fast many forgot today what was accomplished then–this can hardly be described as turning the other cheek. If anything else it was a massive blow to an existing world order when Russia threw down the gauntlet. That is how honor is defended–by actions, not petty name-calling. Massive defeats of US “trained” Ukrainian Armed Forces followed in Donbass.

But it is already clear that by failing to achieve any sensible political objectives in Ukraine and in Russia, and, by this, starting a massive global re-alignment, the United States sustained a defeat. What will be the consequences of this defeat? I hate to speculate, I just know that they are already big and that the moment of facing the reality is coming.

Today, almost four years later, we live in the unrecognizable world and no-one in the US, unless they write for tabloids and don’t care about reputation, describes scenarios of Russia’s defeats. It is a world in transition to not just genuine multipolarity, we are already living in multi-polar reality, but to a world where the United States is effectively checked in its attempts to project power into Eurasia. The world where it is reduced to merely calling names, hurling insults, and doing provocations–because it cannot do anything else. Somehow people ignore this fact of a dramatic, incredibly fast in historic terms, decline of the American power. American post-WW II prosperity and influence, rested primarily with the myth and bluff of American military power, which was supposed to make everyone toe the party line and tremble in horror in face of a “punishment” for digressions. Russia called this bluff. 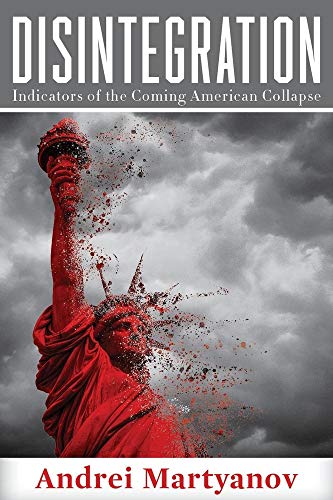 Today, America’s actions represent increasingly pronounced symptoms of a declining power, which cannot face reality without going mad. And she is going mad, domestically, as well as internationally, the only force which is capable to keep this increasingly irrational and dangerous power from committing a suicide while taking everyone else with her is a threat of a massive military defeat. Russia has this force to do so, and so far it works. But I do have my own question: do orderlies in the asylum get offended, when overpowering the violent patient and restraining it to the bed, by this patient’s insults and resistance? I don’t think so–one does not get offended by a violent mental patient. Nor, orderlies defend their honor while restraining a patient. There could be no interactions involving honor between orderly and a violent mental patient. America is not treaty-worthy party, hasn’t been since early 1990s, thus there are no interactions involving honor in Russian-American relations on the American side.

So, I ask then, is it legitimate to assess the situation by comparing two states of the world in 2014 and 2018? The answer is not only that it is legitimate but that it is the only way to do so. Clausewitz’ dictum still stands today: “It is legitimate to judge event by its outcome, for it is the soundest criterion”. With all American provocations, insults and Russia’s alleged turning the other cheek, one MUST ask the question–is Russia winning? Once one looks at the larger picture–the answer is unequivocal yes. It manifests itself in many things, from economy, to military to geopolitics. So:

The zionist neoconsevatives who rule in Washington are capable of the same mistake that Napoleon and Hitler made. They believe in âthe end of history,â that the Soviet collapse means history has chosen America as the model for the future. Their hubris actually exceeds that of Napoleon and Hitler.

Neither Napoleon, nor Hitler dealt with the issues of nuclear deterrents, nor did they live in the world of an instant propagation of information. Judging by hysterical reaction of these very same neocons and their military “experts”, be it in 2015 to the events in Syria, or Putin’s March 1, 2018 speech to Federal Assembly–the message was heard. Hysteria is a first sign of weakness. Those neocons might be irrational, at least some of them, but even those understand that there is a price to be paid and there are reasons, to be discussed separately, to believe that there is an understanding of the severe limitations of America’s power. After all, Napoleon and Hitler marched into Russia after putting the Europe to its knees. They had highly deserved reputation behind both Grande Armee and Wehrmacht. The United States cannot win a single war against subpar opponent since 1950, once one discounts a turkey shoot against Saddam’s grossly inferior army.

Per Semyon Bagdasarov. He is a good man and a Russian patriot, he is a former political officer, but I don’t take his suggestion “to sink” US Aircraft Carrier seriously. Patriotism is not an excuse for irrationality–the loss of a single carrier in case of a limited TLAM strike on some targets in Syria will create in the US a political crisis of such proportions that the world will stand on the very brink of the nuclear war. US was and is inherently biased towards nuclear response, with some short break in 1990s, when it saw itself as self-proclaimed greatest military in the world in the wake of Soviet collapse. Not doing stupid things but the ones which are necessary is what defined Russia’s responses in the last several years. This is the only correct strategy.

And here is my conclusion: being former military I give a full recognition to the fact that I am merely a writer who, as well as Bagdasarov, or any other “analyst” have no any access to a daily top secret briefings by Chief of General Staff and Russia’s intelligence to Vladimir Putin. Patriotism or, even, some residual professionalism is not a substitution to having a full situational awareness provided to Supreme Commander by thousands upon thousands people who even risk their lives to provide a key information for making this one and only right decision to prevent the world from annihilation. Russia knows where the Unites States is today and, when looking back at the last 5 years in world’s history, I see Russia as that proverbial cat finishing off the chicken, while those who are supposed to use the force cannot do so and speak loud and carry no stick. This chicken is Pax Americana. Russia will continue to do what she does, because it works, and because she knows how to fight wars, she knows how to defend herself and because we all live in a different world today, the way Russia, not the US, sees it. In this case hurling insults and even launching another useless volley of TLAMs in Syria, or “training” its Ukrainian stooges for military provocations is the limit for the United States and there is nothing honorable in that.