Iâve noted recently that there seems to be a certain âtypeâ leading the anti-science, anti-Truth shock troops into battle: Ben van der Merwe, Adam Rutherford, Jess Wade and Susan Goldberg. They are members of ethnic minorities. They are from privileged backgrounds. But despite attendance at superb and usually private schools, they have failed to attend the most elite universities. However, there are always exceptions to rules and itâs important to understand them as well. Angela Saini, the British-Indian BBC and Guardian journalist and author of the much-touted anti-science book Superior: The Return of Race Science, is just such an exception.

Sainiâs race-denying book has been pulled to pieces by various non-woke academics, triggering her groupie, Jess Wade, to have one very critical review removed by YouTube for allegedly violating its community guidelines.

Angela Saini agrees with Wade that race is a âsocial construct,â that it is immoral to research race differences even if they are real, and that truth is reducible to power.

In other ways, however, they are very different. Saini, a genuine meritocrat, is clearly cleverer. But her higher intelligence, unfortunately, seems to be overwhelmed by a condition known as âParanoid Personality Disorderâ âcharacterized by extreme sensitivity to criticism, grudge-holding, suspiciousness and secretiveness, a combative sense of self-righteousness, self-aggrandizing (to compensate for paranoia about not being good enough), and a preoccupation with dangers and conspiracies.

Angela Devi Saini was born in Newham, a poor area of northeast London, in 1980, to Punjabi immigrant parents: A Hindu mother and a Sikh father. As Edward Dutton noted in his review of Superior:

â¦she hints at some kind of family rift, relating to race. Her Hindu mother, Santosh Gupta, married a man of a different âcaste, religion, and community,â Sohan Saini, in Redbridge in Essex in 1979.

Sainiâs mother was raised to strongly believe in the caste system, meaning marrying a Sikh would have horrified her family. Saini herself dedicates a chapter of Superior to criticizing the caste system, which is central to Hinduism, as vile and racist.

The Saini family eventually moved to 17-19 Heathfield Road in Bexleyheath in southeast London, a Victorian house which is also a bed-and-breakfast, presumably one of the family businesses. Saini now lives in Londonâs affluent Highgate. [Women arenât the inferior sex. Hereâs all the proof you need, By Sally Williams, The Times, June 26, 2017]

When Saini was ten years old, she writes in Superior, âboys from my school threw rocks at me and my sisterâ¦telling us to go home.â This was presumably her sister Monica Niermann nee Saini (b. 1981), who Londonâs socialist Mayor, Ken Livingston, appointed a âLondon Leaderâ (lead campaigner) on environmental issues in 2007. At the time, Monica worked as âgreen travel coordinatorâ for Christian Aid, possibly meaning she had converted to Christianity [Inspiring others to think green, News Shopper, October 29, 2007]. Angelaâs other sister, sociologist Rima Saini (b.1988) is âa scholar of race and politicsâ whose assistance is acknowledged in Superior

So Sainiâs background was not privilegedââgrammar schoolâ below means a State-funded school for bright kids.

Once at grammar school, Saini was under pressure, she claims, as a minority child whose parents had invested a great deal in emigrating to Britain, to do well. She was

â¦told that we have to work twice as hard to achieve the same as white peopleâ¦Among middle-class Indians living in the United Kingdom (the group my parents belong to), the weight of cultural pressure has generally been on children to become physicians, pharmacists, lawyers, and accountantsâ¦ They are reliable routes into middle-class society.

That said, Rimaâwho studied Sociologyâfelt no such pressure and nor did Monica, so this likely reflects Saini being moderately paranoid towards her parents.

At Oxford, one of Englandâs two super-elite universities, Saini studied Engineering, one of the most intellectually challenging subjects, in classes dominated by males. She is obviously an extremely intelligent woman. So how has she managed to produce a book riddled with errors, illogical arguments, and child-like emotion?

But Sainiâs boastfulness doesnât stop there. She married her BBC journalist husband Mukul Devichand in August 2009 âin a Hindu ceremonyâ [Keble College, Oxford: The Record, 2009, p.132] . They are one of Britainâs âAsian Power CouplesâTop 100â (in British-English âAsianâ means âSouth Asianâ) . This is quite impressiveâuntil you realise how they achieved this accolade: they emailed and asked for it.

And, paradoxically, Sainiâs first book was an exercise in Indian triumphalism: Geek Nation, How Indian Science is Taking Over the Worldâsomewhat at odds with the latest data on average Indian IQ.

A few months ago I was invited to be interviewed for science-denier @AngelaDSaini‘s BBC radio documentary on race. I declined, saying I didn’t expect fair treatment. Now she preemptively blocked me and everyone else she disagrees with. How disingenuous that invitation was

Indeed, Saini created her own âblock listâ which insulates her from huge numbers of tweeters who might disagree with her, offering it to her followers so they could be âsaferâ on Twitter. 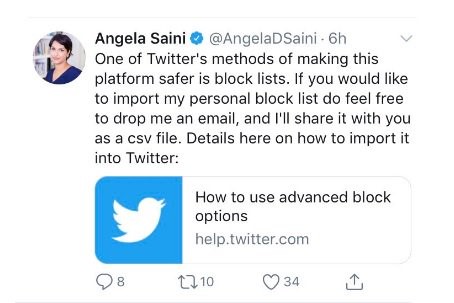 She then wrote in The Scientific American: âThey argue they have the right to say what they want, that the world needs more âdiversity of opinion.â But do the rest of us have a duty to sit and listen to racist pseudoscience?â[The Internet Is a Cesspool of Racist Pseudoscience, by Angela Saini, July 29, 2019]

This is one of many examples of Sainiâs combative self-righteousness. Her book drips with smug, patronizing superiority: âThis casual speculation surprised me, coming as it did from a respectable geneticist.â As if to say âForgive them, Lord, they know not what they doâ¦â

Thus, while Saini appears to be much more intelligent than Wade, her paranoid personality is so strong than she has nevertheless become an ideological extremist, in order that her clear and self-esteem-raising worldview can be maintained.

Paranoid Personality Disorder is associated with just such a life path [Fundamentalism and Paranoia in Groups and Society, by Stanley Schneider, Group, 2002].

One of the causes of paranoid personality is childhood trauma [Mistrustful and Misunderstood: A Review of Paranoid Personality Disorder, by Royce Lee, Current Behavioral Neuroscience Reports, 2017]. Sainiâs childhood traumas were apparently about the issue of ârace.â Angela and Monica were two of âof a handful of brown girls in a white working-class Southeast London suburbâ and thus a target for bullies. This has seemingly traumatized Angela, to the extent that she has wanted to write Superior âsince I was a child.â Getting âstuckâ like this is a recognized sign of trauma. [Getting Stuck In Your Trauma or PTSD, Oxford Development Group]

Saini also worries about what would happen to her people if whites knew the âtruth.â So she canât think about âraceâ rationally. Paranoid, she lives in a world of dangerous conspiracies. Even âtruthâ is a conspiracy by the powerful. Race realist researchersâin line with the conspiratorial mind of the paranoid personalityâare ultimately going to kill people like her. âWhat has started with a gentle creep through the back door of our computers could end, if weâre not careful, with jackboots through the front door of our homes,â she wrote in the Scientific American. In race realist science, she says in Superior, âAny sense of common humanity was left at the door.â

At the end of Superior, Saini plaintively soliloquizes to her five-year-old son, Aneurin, (presumably named after Aneurin Bevan, Left-wing Labour politician and architect of Britainâs National Health Service). In 2015, however, this same boy was apparently called âRim.â [Science and Nature, by Clare Finney, Kin: A Journal for Parents, 2015, p.60]. This is an example of Sainiâs paradoxical desire to be famous (âself-aggrandizingâ) and yet to be highly secretive, as people with her disorder tend to be.

‘What makes us who we are is the content of our characters, as Martin Luther King reminded us. And this is entirely in our own hands. Don’t forget that, my baby.’

Our character is influenced by genetics and, to a much lesser extent, environment.

Unfortunately, mothers like Saini tend to pass on their paranoid personality to their children, it being 50% heritable [Genetic and Neuroimaging Features of Personality Disorders, by Guorong Ma et al., Neuroscience Bulletin, 2016]. Children of such sufferers are often anxious, have low self-esteem, and aggressively externalize or harmfully internalize their emotions [When a Parent Has Paranoid Personality Disorder, Exploring Your Mind, August 31, 2018].

Hopefully, however, one day little âAneurin,â unlike his mother, will be able to put emotion aside and examine âraceâ rationally and impartially.