Finkielkraut is one of our French neoconservatives. Formerly a Trotskyist, he is now a nationalist. He embodies what Soral calls National-Zionism, that new ideology massively promoted by Jewish âintellectualsâ and media pundits who, after calling for the abolition of borders and drowning Europe in mass immigration, now tell the French people to turn to Israel as a model for dealing with Muslims.

Finky, as we like to call him, also embodies the arrogance of ethnocentric Jews who get an undeserved ubiquity on television complaining about anti-Semitism and the next Holocaust. It is true that, when Finkielkraut shows up in a Yellow Vest gathering, he will be called âSale sioniste!â which, as everyone is supposed to know, means âSale juif!â which in turn is a potential holocaust. And so, whenever Finkielkraut gets insulted in the street, which happens, it is national news, and the President himself has to make the standard declaration: âThe anti-Semitic insults he has been subjected to are the absolute negation of who we are and what makes us a great nation. We will not tolerate them.â That is the kind of important person Finkielkraut is. Oh! and Finkielkraut has been elected in the prestigious AcadÃ©mie FranÃ§aise among those we call âthe Immortalsâ, although it is unclear under what pretext. Like Bernard-Henri LÃ©vy, Finkielkraut does write books that are more and more heavily promoted but less and less read.

Alain Soral is indeed the most dangerous person for the National-Zionists. And the French elite of the media-finance-political complex are justifiably worried about the âsoralisation des espritsâ, an expression that has surfaced in recent weeks, as Soralâs name is heard here and there among the Yellow Vests. So the National-Zionists couldnât hide their joy when learning from the national press agency (AFP) on April 15 that Soral was sentenced to one year in prison with an arrest warrant âpour contestation de lâexistence de la Shoahâ (âfor denying the existence of the Holocaustâ), an expression which only makes sense, I believe, if the Holocaust is God.

Listen here to Soralâs own analysis of his sentence, with English subtitles.

Soralâs crime was the publication, on the website of his association âÃgalitÃ© et RÃ©conciliationâ, of a parody of a Charlie Hebdo cover mocking the Shoah mythology. The original cover, on the left below, appeared after the terrorist attack in Belgium in March 2016, which made 35 dead and 300 wounded. According to the judges, the original cover is protected by free-speech law, while the parody is obviously a crime deserving one year imprisonment, not for the artist, but for the man whose association posted it on Internet. This is not the first time Soral is convicted. He has faced 60 court cases in recent years, and been fined to a total of 371,000 euros. Significantly, he has never been condemned for the contents of his books or videos, but for cartoons and illustrations posted on his website. Here are a couple of them: Last year, Soral was also put on trial for posting this photoshopped picture of Emmanuel Macron with his campaign slogan âEn Marcheâ and three of his sponsors behind him, who happen to be Jewish: Jacob Rothschild (Macron worked for the Rothschild bank), Jacques Attali (a presidential adviser since Mitterrand, who boasts of having âput Macronâs foot on the stirrupâ), and Patrick Drahi (Israeli owner of the major media that sold Macron to the French public). Soral was finally discharged because a Socialist Party member named GÃ©rard Filoche also tweeted this picture (then apologized), and the French court couldnât decently convict Soral and not Filoche. 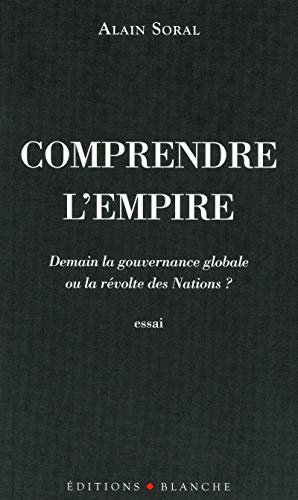 Soral is an essayist who has published best-selling polemical essays such as Vers la fÃ©minisation? â DÃ©montage d’un complot antidÃ©mocratique (âTowards feminisation? â Analysis of an antidemocratic plotâ). His latest book Comprendre lâEmpire: Demain la gouvernance mondiale ou la RÃ©volte des nations (âUnderstanding the Empire: Tomorrow global governance or an uprising of nationsâ), published in 2011, propelled him as one of the most insightful critic of the American-Zionist Machiavellian hubris.

Since then, Soral has produced about a hundred long videos commenting current events, some of them totaling half a million views, which is enormous for France. He has a real genius for producing analyses of deep politics and social issues that are profound, synthetic, and clear. He exposes in plain language the evil schemes of our elites and the lies of mainstream media. And he is not afraid to criticize this Jewish power that Gilad Atzmon defines as âthe capacity to silence criticism of Jewish Powerâ (Atzmonâs books, by the way, are translated in French by Soralâs publishing company KontreKulture).

Soral has become the most outspoken critic of the âdictatorship of the CRIF (Conseil representative des Institutions juives),â the French equivalent of AIPAC and ADL combined. Thanks to the work of Soral and his team of investigators, literally millions of Frenchmen have become aware of the obscene power of the CRIF and their nefarious intrigue for criminalizing any criticism of Israel or Jewish power, under the pretext of fighting against âanti-Semitismâ.

I once compared Soral to an exorcist, because by his very words, he forces the demons to come out and reveal themselves. He has become the bÃªte noire of our corrupt political and media circus, and crystallizes their hatred. In 2014, Prime minister Manuel Valls had declared war on Soral as well as on his friend humorist DieudonnÃ©, making it a national priority. This fury from the part of a statesman who declared, on a Jewish radio, being âeternally bond to Israel through my wifeâ contributed to both Vallâs discredit and Soralâs prestige, especially after Valls pathetically returned to his native Catalonia after his divorce.

Every sentence Soral receives makes him stronger, because it proves him right. Soral is uniquely dangerous because he never apologizes. He may very soon become the first Frenchman imprisoned for a political cartoon, and thereby the living proof that French democracy is dead. One year in prison is all he needs to write his next book: Mon Combat.