Jonathan Sacks is given an award by the war-criminal Tony Blair
◄►Bookmark◄❌►▲ ▼Toggle AllToC▲▼Add to LibraryRemove from Library • BShow CommentNext New CommentNext New ReplyRead More
ReplyAgree/Disagree/Etc. More... This Commenter This Thread Hide Thread Display All Comments
AgreeDisagreeThanksLOLTroll
These buttons register your public Agreement, Disagreement, Thanks, LOL, or Troll with the selected comment. They are ONLY available to recent, frequent commenters who have saved their Name+Email using the 'Remember My Information' checkbox, and may also ONLY be used three times during any eight hour period.
Ignore Commenter Follow Commenter
Search Text Case Sensitive  Exact Words  Include Comments
List of Bookmarks

Jeremy Corbyn has a beard. So has Jonathan Sacks. But this shared philopogony hasnât brought the two men closer together. Sacks is the former Chief Rabbi of Britain and, to be fair, I think we be better off if more Jews were like him. He doesnât seem to hate Whites and the Christian religion in the way so many of his co-ethnics do.

Battle of the Beards

But that doesnât mean Sacks is a reasonable or objective man where his own race is concerned. He can be ethnocentric and apply double standards with the best of them, as heâs just proved by his comments on his fellow beardie:

Jeremy Corbyn is âan anti-Semiteâ who has âgiven support to racists, terrorists and dealers of hateâ, the former chief rabbi Jonathan Sacks has said. In an exclusive interview with the New Statesman, the peer described Corbynâs recently reported 2013 remarks on âZionistsâ as âthe most offensive statement made by a senior British politician since Enoch Powellâs 1968 âRivers of Bloodâ speechâ.

Sacks, who was chief rabbi from 1991 until 2013, added: âIt was divisive, hateful and like Powellâs speech it undermines the existence of an entire group of British citizens by depicting them as essentially alien.â

At a speech made at the Palestinian Return Centre in London in 2013, Corbyn said of a group of British âZionistsâ: âThey clearly have two problems. One is they donât want to study history and, secondly, having lived in this country for a very long time, probably all their lives, they donât understand English irony either.â (Corbynâs âZionistâ remarks were âmost offensiveâ since Enoch Powell, says ex-chief rabbi, The New Statesman, 28th August 2018)

Enoch Powell predicted that mass immigration would lead to race war. Jeremy Corbyn said that some Zionists donât get âEnglish irony.â Whether or not you agree with Powell, is it reasonable to compare the words of the two men? Are they âhatefulâ and âdivisiveâ in a similar way? Iâd say no, theyâre obviously not, and the vast majority of British Whites probably agree with me.

Sacks doesnât agree with me, and he has the Community with him, according to the Jewish Chronicle: âReform Rabbi Jonathan Romain of Maidenhead Synagogue said that, while the Enoch Powell analogy may have shocked people, âit accurately reflected what most British Jews feel.ââ

The poisoning of Britainâs politics

Well, if Rabbi Sacks and other Jews want anti-Semitism, I think they should look much closer to home. This is from the Jerusalem Post in 2007:

Multiculturalism promotes segregation, stifles free speech and threatens liberal democracy, Britainâs top Jewish official warned in extracts from [a recently published] book â¦ Jonathan Sacks, Britainâs chief rabbi, defined multiculturalism as an attempt to affirm Britainâs diverse communities and make ethnic and religious minorities more appreciated and respected. But in his book, The Home We Build Together: Recreating Society, he said the movement had run its course. âMulticulturalism has led not to integration but to segregation,â Sacks wrote in his book, an extract of which was published in the Timesof London.

âLiberal democracy is in danger,â Sacks said, adding later: âThe politics of freedom risks descending into the politics of fear.â Sacks said Britainâs politics had been poisoned by the rise of identity politics, as minorities and aggrieved groups jockeyed first for rights, then for special treatment. The process, he said, began with Jews, before being taken up by blacks, women and gays. He said the effect had been âinexorably divisive.â âA culture of victimhood sets group against group, each claiming that its pain, injury, oppression, humiliation is greater than that of others,â he said. In an interview with the Times, Sacks said he wanted his book to be âpolitically incorrect in the highest order.â (Sacks: Multiculturalism threatens democracy, The Jerusalem Post, 20th October 2007; emphasis added)

So Sacks claimed that âBritainâs politics had been poisonedâ by a self-serving, self-pitying, self-aggrandizing ideology that âbegan with Jewsâ and had been âinexorably divisive.â His claim is absolutely classic anti-Semitism, peddling a stereotype of Jews as subversive, manipulative and divisive outsiders whose selfish agitation has done huge harm to a gentile society.

Sacks was right, of course: Jews do demand special treatment and did indeed invent the âidentity politicsâ that has poisoned British politics (and American, Australian, French and Swedish politics too).

By saying all that, Sacks was being far more âanti-Semiticâ than Jeremy Corbyn was, even by the harshest interpretation of those comments on Zionists. Furthermore, Sacks has proved that Corbyn was right. Zionists do lack irony. In 2007 Sacks, a staunch Zionist, claimed that the âpoisoningâ of British politics âbegan with Jews.â In 2018 heâs condemning Jeremy Corbyn for saying something much milder about Zionists.

âAbsolutely nothing apartheid about thisâ

And in 2018 Sacks is also offering a ridiculous defence of a new law in his beloved land of Israel:

Asked by the New Statesman to comment on Israelâs new nationality law, which states that the Jewish people have âan exclusive right to national self-determinationâ in the country and stripped the Arab language of its official status, Sacks said: âIâm not an expert on this. My brother is, Iâm not, heâs a lawyer in Jerusalem, he tells me that thereâs absolutely nothing apartheid about this, itâs just correcting a lacuna. â¦ As far as I understand, itâs a technical process that has none of the implications that have been levelled at it.â (Corbynâs âZionistâ remarks were âmost offensiveâ since Enoch Powell, says ex-chief rabbi)

When Sacks said there was âabsolutely nothing apartheid about this,â he was protesting too much. He is clearly uncomfortable about the new law and struggling to defend it, which is why his usual fluency deserted him when he spoke to the New Statesman. One âlevelsâ accusations, not implications. And the implications of the new law are perfectly clear, which is why Sacks was driven to waffle about âa technical process.â Yes, the law is a technical process whereby Arabs are defined as second-class citizens and Jewish supremacism is openly proclaimed as the guiding principle of the Israeli state.

Of Monkeys and Men

Iâm sure that one of Sacksâ heroes, the great Jewish philosopher and Talmudic scholar Maimonides (c. 1135-1208), would have applauded the new law. This is what Maimonides wrote in his hugely influential Guide for the Perplexed (c. 1190), one of the most revered and respected texts in the three thousand years of Judaism:

The people who are abroad are all those that have no religion, neither one based on speculation nor one received by tradition. Such are the extreme Turks that wander about in the north, the Kushites [Blacks] who live in the south, and those in our country who are like these. I consider these as irrational beings, and not as human beings; they are below mankind, but above monkeys, since they have the form and shape of man, and a mental faculty above that of the monkey. (Guide for the Perplexed, Book 3, chapter 51)

Now that is racism, ladies and gentlemen. And if you want proof that Maimonidesâ poisonous ideas are alive and well in the Jewish world today, look no further than Yitzchak Yosef, the Sephardic Chief Rabbi in Israel, who was condemned this very year for âcalling black people âmonkeysâ.â Rabbi Yosef has visited the headlines before: in 2016 he âstated that non-Jews should not be allowed to live in Israel, except to serve the Jewish population.â The Jewish Chronicle added that he âlater reversed this position.â 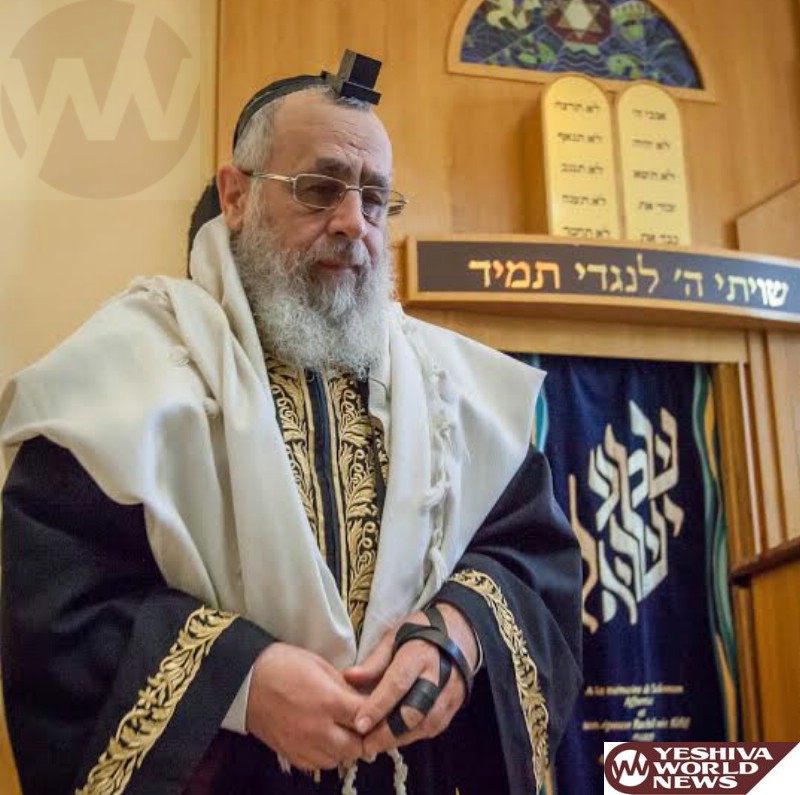 Well, he might have said he no longer believed it, but that wouldnât be speaking the truth. Servitude for goyim, the superiority of Jews and the subhumanity of Blacks are all perfectly orthodox Jewish doctrines. Jews are not the philanthropic egalitarians that they pretend to be, and Jonathan Sacks was perfectly correct to describe them as poisoners of British politics. He himself has upended another vat of poison by joining in the hysteria and hyperbole about Jeremy Corbynâs mild comments on Zionists.

Letâs compare Corbyn with the shabbos goy Tony Blair, who gave Sacks a âLifetime Achievement Awardâ in February this year and hailed Sacks as âone of my heroes.â According to the Jewish Chronicle, Blair âwas conscious of the need to have very, very good relationsâ with âthe Jewish community.â

In other words, the tiny Jewish minority pulled Blairâs strings. At the behest of his Jewish âfundraiserâ Lord Levy, Blair lied Britain into a hugely expensive war on Iraq that killed vast numbers of innocent civilians, fomented sectarian strife in the Middle East and terrorism in Europe, and led directly to the rise of Islamic State. Jeremy Corbyn resolutely opposed the war and predicted its dire consequences. Blair is a liar, confidence-trickster and war-criminal who will one day, I hope, face the death-penalty for what he and his Jewish immigration minister Barbara Roche did to Britain. Jeremy Corbyn, by contrast, is a virtue-signalling Marxist idiot who opposes war and the military-industrial complex.

But Blair obeyed Jewish orders and Corbyn doesnât. Thatâs why Blair is now worth more than Â£60 million and Corbyn is endlessly vilified in the British media. Few British Whites know the term âethnocentrism,â but more and more of them can see the Jews practising it. As of Today, I am the Only Winner of the 12 December Election!
Gilad Atzmon
• 107 Comments • Reply
← Gas-Chamber Blues RevisitedKombatting Kavanaugh: Rape-Hysteria and... →
Hide 39 CommentsLeave a Comment
"Poison for the Goyim: More Hysteria and Hyperbole About Labour Anti-Semitism"
• 39 Comments
Commenters to Ignore
Commenters to ignore (one per line)