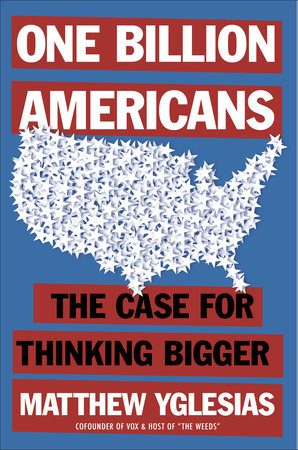 VDARE.com Editor Peter Brimelow wants me to review Matthew Yglesiasâs One Billion Americans: The Case for Thinking Bigger But I have some fundamental questions before I do so. First, what does âAmericanâ even mean if we import more than 600 million migrants, utterly swamping the already floundering Historic American Nation? Second, how will this huge population help us âcompete with Chinaâ when there have been numerous cases of migrants spying for China? Finally, why would any immigrant want to defend a country which systemically incentivizes non-assimilation? If we must have an empire to compete with Chinaâs civilization-state, it would make more sense for the West to consolidate as a racial, cultural, and spiritual entity than to import millions of people who are more likely to destroy us than save us. Reviewers I respect give me no hope that Yglesias, a lunatic immigration enthusiast so rabid that he has blocked VDARE.com on Twitter, address these questions

Indeed, itâs not certain that America can maintain its identity even with the current demographic balance. Ygesliasâs premise is already moot because thereâs now no consensus about what âAmericaâ even means. We are in the midst of a Cultural Revolution, with Americaâs history, heroes, and heritage under attack. Even after centuries in this country, many African-Americans simply do not identify with the United States, which is why they are now kneeling in protest for the Star-Spangled Banner, demanding we honor their own âNational Anthem,â and burning the American flag.

Rather than standing against this behavior, President Trump just rewarded it with another payoff, a $500 billion âPlatinum Planâ for black America, including their own pseudo-Independence Day, âJuneteenthâ [President Trump Releases The Platinum Plan For Black Americans: Opportunity, Security, Prosperity, And Fairness, Donaldjtrump.com, September 25, 2020]. It wonât help him politically and once again, white workers get the bill.

Antifa rioters, many white/ Jewish, are also spearheading this movement, arguing that âAmerica was never greatâ and leading attacks on police, conservatives, and any random white people who happen to be nearby. Antifaâs expressed, clear desire is to completely tear down American society using violence and intimidation. Despite tough talk, Attorney General William Barr is not cracking down on such groups. Instead, the wrath of the federal government is saved for people like Julian Assange [Hereâs How Bill Barr Can Win the War Against Antifa and BLM Without Firing A Single Shot, Revolver, September 25, 2020]. How would importing more people who donât identify with Heritage America somehow make us stronger in the midst of such chaos?

Furthermore, the rot in academia has spread to all American institutions. Andrew Sullivan said it best: âWe all live on campus now.â [We All Live on Campus Now, New York, February 9, 2018].

In fairness, the Trump Administration has acted here. The president banned Critical Race Theory in executive branch agencies and government contractors. Heâs talking about (but hasnât yet imposed) patriotic education in schools (which historically was one of the main reasons public schools were created in the first place) [Trump Announces âPatriotic Educationâ Commission, A Largely Political Move, by Alana Wise, NPR, September 17, 2020]. The Department of Justice is preventing Yale from discriminating against whites and Asians in admissions.

Unfortunately, far more must be done, including banning the root cause of this rot, Affirmative Action. Basic pillars of American identity and sovereignty â such as making English the official language, enforcing immigration laws, banning Birthright Citizenship, and imposing an immigration moratorium â must be imposed. Until then, itâs absurd to speak about America being a serious country, or a country at all. The cases of Ilhan Omar, Luis Gutierrez, and Jorge Ramos show us that crossing the border and holding an American passport does not make you a real American. It might just make you an invader.

This is an especially serious possibility when confronting China. There have been countless cases of Chinese acting as patriots for their real homeland:

Consider the truly breathtaking statement from FBI Director Chris Wray that he considers the âwhole of Chinese societyâ to be a security threat [The director of the FBI says the whole of Chinese society is a threat to the USâand that Americans must step up to defend themselves, by Michal Kranz, Business Insider, February 13, 2018]. He repeated the extent of the Chinese threat to American institutions in a speech just a few months ago [The Threat Posed by the Chinese Government and the Chinese Communist Party to the Economic and National Security of the United States, FBI, July 7, 2020].

Now, this is the same FBI Director whose agency was spying on President Trump and who warned not long ago that fighting âracist violenceâ is an equal priority to foreign terrorism. I donât think he means Black Lives Matter [FBI Announces That Racist Violence Is Now Equal Priority To Foreign Terrorism, by Hannah Allam, NPR, February 10, 2020]. However, Yglesias clearly takes the Chinese threat seriously. Indeed, the whole premise of the book, stated in the very beginning, is that we need to have a larger population to defeat China, which will be our âshared national purpose.â

Yet the policy he advocates wonât make America stronger; it will just mean importing more hostile foreigners who are given rewards by our own government if they continue to think of themselves as hostile foreigners.

Does the Left celebrate patriotic non-whites who stand up for America like Michelle Malkin, Jesse Lee Peterson, or the late Herman Cain? Of course not â they despise them and freely use racial and sexual slurs against them. Look whatâs happening to black police officers.

This is how âprotestersâ are treating our police officers. This is absolutely disgraceful. pic.twitter.com/zX6wRBDiaE

This immense social pressure ensures such brave people remain a handful. China, a serious nation, clearly knows diversity is a weakness. Chinaâs military leaders worry that in a conflict with the U.S., we could arm minority populations within the Middle Kingdom to cause chaos.

The Chinese government fears separatism deeply â and, it should be noted, it already thinks Taiwan is part of its country [The Chinese Communist Partyâs Biggest Fears Are Separatism And An Economic Crisis, by Joshua Ball, Global Security Review, April 10, 2020]. Seen from that perspective, the Chinese governmentâs campaigns to demographically dispossess Uighurs and Tibetans is an effective yet morally abhorrent policy. It is creating an assertive civilization state built upon deep cultural roots and an unchallengeable Han ethnic majority [The irresistible rise of the civilization-state, by Aris Roussinos, UnHerd, August 6, 2020]. Few would suggest China would somehow become stronger if the number of Uighurs and Tibetans magically tripled. Instead, Beijing would probably have powerful separatist movements to deal with.

Indeed, the reason Washington DC is so obsessed with âRussian manipulationâ is because Russia has essentially no influence. If you do name the lobbies which have influence in âourâ government, such as those of Mexico, Saudi Arabia, and Israel, your political career will end very quickly.

The truth is that Yglesias is advocating Chinese-style demographic dispossessionâand weâre the Tibetans. Diversity is already tearing our country apart. The U.S. was recently compared to the Holy Roman Empire because it has archaic institutions [America is the Holy Roman Empire of the 21st century, by Ryan Cooper, The Week, September 24, 2020] The metaphor is apt, but for different reasons than the author intended. âAmericaâ has become a vague legal concept rather than a nation-state or even an empire.

We are several nations lumped together. The central government treats the core European-Americans who built the country as almost an enemy. There is no âPlatinum Planâ â or much of anything else â coming from this supposedly âwhite nationalistâ administration. Those who ultimately sustain the state are those who receive the least benefits. As in the Holy Roman Empireâs successor state, the Austro-Hungarian empire, efforts to recognize âdiversityâ and provide concessions to different groups are simply accelerating the breakup of the country [Ethnic boxes: the unintended consequences of Hapsburg bureaucratic classification, by Rok Stergar and Tamara Scheer, Nationalities Papers, June 1, 2018].

If we truly must build an empire of our own to compete against China, it would make more sense to unify the West under a spiritual, cultural, and racial identity. That great dream of Western unity would be something to strive for. That would be a âshared national purposeâ not just for Americans, but for all of us who hail from the great European fatherland.

And, though such a civilization-state would necessarily have a white supermajority, it wouldnât need to revert to Chinese-style concentration camps or try to destroy ethnic minorities.

Of course, barring revolutionary change, we canât build anything like that. Those who rule Europe imported race problems of their own and are being torn apart from within. Europeans will be minorities within their own countries if current trends continue. The institutions of culture have been utterly subverted and now are breaking down our civilizational achievements instead of forging new ones. Weâve been so thoroughly deconstructed that if post-Western âcivilization stateâ confronted China, it would be a kind of super EU. It would be bound by a consumerist anti-culture featuring overweight bugmen watching superhero movies and hysterical women having emotional meltdowns over whatever journalists are calling racist today.

Still, I donât even concede the point that we must have some gigantic population or civilization-uniting Imperium in order to check China. An America of 300 million with a white supermajority and a united culture could maintain its superpower status against China easily. We might need to form alliances with Pacific powers, especially India, Japan, and Russia. The latter has much to lose from Chinese migration into Siberia.

Unfortunately, a Russian-American alliance is impossible now, mostly due to the ethnic grievances of journalists, activists and politicians who are still mad at the Tsar. Thus, the neuroses of the American Ruling Class has reversed President Nixonâs diplomatic achievement and has forced Moscow and Beijing into an unnatural alliance.

And if a President Kamala Harris, er, Joe Biden gets America into a war against such adversaries, there are good reasons to believe the United States wonât win [Chilling World War III âwargamesâ show US forces crushed by Russia and China, by James Rogers, Fox News, March 12, 2019].

Of course, this is just further proof that importing foreigners doesnât automatically make your country stronger. It just turns what used to be your country into a prize to be captured by hostile out-groups. These groups then simply use âyourâ government to enact their own tribal obsessions.

I suspect Yglesias [Tweet him] knows this. James Burnham always stressed knowing the difference between the âformal meaningâ of a book and the âreal meaning,â the intended consequence in the real world. The real meaning of Yglesiasâs book is not to create a strong America. Itâs to displace the Historic American Nation altogether, replacing it with a continent-wide favela not worth fighting for, or even living in. This glorified shopping mall will be ruled by those who have no connection or loyalty to our country.