Gen. Curtis LeMay, USAF
◄►Bookmark◄❌►▲ ▼Toggle AllToC▲▼Add to LibraryRemove from Library • BShow CommentNext New CommentNext New ReplyRead More
ReplyAgree/Disagree/Etc. More... This Commenter This Thread Hide Thread Display All Comments
AgreeDisagreeThanksLOLTroll
These buttons register your public Agreement, Disagreement, Thanks, LOL, or Troll with the selected comment. They are ONLY available to recent, frequent commenters who have saved their Name+Email using the 'Remember My Information' checkbox, and may also ONLY be used three times during any eight hour period.
Email Comment Ignore Commenter Follow Commenter
Something Here
Search Text Case Sensitive  Exact Words  Include Comments
List of Bookmarks

As I write this in late March of 2020, the world is under attack from a deadly strain of coronavirus called COVID-19. Thus far, there have been around 18,000 deaths world-wide, including 550 deaths in the United States where I live. My country has come to a halt: schools and businesses are shut down and people have been warned to stay in their houses or apartments hunkered down in the face of this menacing enemy. Weâre in a war, thatâs how it is being described in the media. The president has said he is like a war-time president. 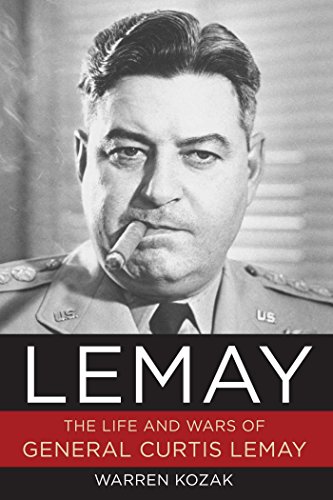 Speaking of war, tonight, hunkered down as I usually am in this very late stage of lifeâI didnât need to be directed to hide out on this leather couch Iâm sitting on at the momentâI read a biography of an American World War II-era air force general by the name of Curtis LeMay (LeMay: The Life and Times of General Curtis LeMay by Warren Kozak, Regnery, 2009). As I was reading along, it hit me that COVID-19 has a long way to go before itâs in a league with General LeMay as a killing machine. Back in 1945, in less than three hours, LeMay got way, way more killing done than COVID-19 has been able to accomplish in three months.

And itâs more than just in the sheer number of deaths that LeMay comes out on top in the comparison.

COVID-19 has been bad at snuffing out the lives of children and people who arenât already sick with something. With LeMay, young and old, sick and well, he put them all in their graves.

And LeMay wasnât limited to primly killing people lying quietly in hospital beds with rubber tubes running into them as COVID-19 has been. He set them on fire, deprived them of air to breathe, and heated them up like pot roasts. Imagine that action!

More, COVID-19 seems only to be proficient at x-ing out human life in cold weather; no good in the summer. LeMay demonstrated in both Europe and Asia that he was a man for all seasons, as it wereâhe was as effective cancelling someoneâs existence in July as January.

Plus, Curtis LeMay didnât just kill people; he also totally leveled the areas they lived in. COVID-19 has accomplished nothing in this regard.

In addition, Curtis LeMay had style and pizzazzâhe had a snappy uniform and chewed on a big cigar. COVID-10, tiny and round with little spikes, no snappy uniform, no big cigar, nothing, lacks presence entirely.

Even more, Curtis LeMay was miles ahead of COVID-19 in public relations. He did his killing and came off looking good and got fawned over and invited to dinner parties, while COVID-19 does its killing and comes off looking bad and is shunned and people are brewing up poison to slip into its margarita. No contest there either.

The one area where COVID-19 comes out ahead of LeMay is in the ability to make the stock market plunge. LeMay was lacking in that area, though in fairness to him, he wasnât dedicated to getting that accomplishedâtotal destruction and super high death counts were his only priorities.

Assuming you donât know about him, General Curtis LeMay conceived and ordered an incendiary bombing raidâfire bombs, they set everything aflameâon the civilian population of Tokyo, Japan, March 9th, 1945. Hereâs a description of how it went down drawn from the LeMay biography I just read:

Across Tokyo, residents looked up in amazement. They had never seen the âB-sansâ [B29 bomber airplanes] so low, nor had they ever seen so many at once. German Catholic priest, Father Gustav Bitter, who was there, later wrote, âThe fire falling from the sky reminded me of tinsel hung on a Christmas tree. The red and yellow flames reflected from below onto the silvery undersides of the planes in the upper darkness gave them the appearance of giant dragon flies with jeweled wings. I watched as if I were in a trance.â

With sudden fury, tranquility became horror as the incendiaries hit home. They created tornadoes of fire. They sucked away oxygen; people couldnât breathe and suffocated. Masuko Harino, a factory worker, reported, âIntense heat came from the firestorm. My eyes seemed about to pop out. Peopleâs clothes were on fire. They were writhing in torment.â A young woman described a school that had become a three-story oven: every human being inside it was cooked to death. Strewn everywhere, some in batches, the incinerated bodies were black; they looked like logs from a distance. There was a dreadful sameness about the dead, no telling men from women or adults from children. If they could walk, survivors wandered about like ghosts, silent. Those still alive were left to die in agony; there was no medicine, food, or drinking water for them.

The raid lasted two hours and forty minutes. Sixteen square miles of Tokyo, one of the most densely populated areas in the world, was transformed into a moonscape of twisted reddish-black iron, roasted sheet metal, and rubble. Not a single man-made structure still stood. An estimated 100,000 people died in Tokyo that night. More than a million were left homeless. The grisly retrieval of bodies took weeks. At least 70,000 people were buried in mass pits. A U.S. Strategic Bombing Survey concluded, âMore persons lost their lives in Tokyo that night than in any equivalent period of time in the history of mankind.â

How did what Curtis LeMay pulled off that March night in 1945 go over? It went over really big. And LeMay himself went over really big. I read The New York Times every morning, and itâs been non-stop trashing COVID-19 for weeks, not one positive word, and thereâs been all kinds of commiserating with the dead and dying. With LeMay, the Times jumped up and down like cheerleaders. Hurray for our hero! The paper pointed out that those people in Tokyo LeMay set on fire, asphyxiated, and baked had it comingâwomen, children, and infants, every last one of them–because âthe people, factories, and small establishments all contributed to Japanâs war effort.â The Times celebrated LeMayâs admirable deed as the start of really good things: to wit, Japanese cities becoming âno more than holes in the ground.â Though the newspaper cautioned readers that the Japanese âhave done their deadliest fighting from holes in the ground,â so we need to be diligent and thorough with the killing.

Following the bombing raid, New Yorker magazine had a glowing profile of LeMay. And he was on the cover of Time magazine and given an effusive write-up in its pages. Nothing like that for COVID-19. But then again, COVID-19 hasnât done the bang-up job of extinguishing human life that LeMay did, and itâs not anihilating the people who most richly deserve to die like LeMay was so good at doing.

LeMay got a promotion to Chief of Staff of the United States Air Force, and in 1968, ran for vice-president on a third-party ticket, garnering a hefty 13% of the vote. COVID-19 couldnât come by a janitorâs job or get on the ballot for dogcatcher.

LeMay got an elementary school named after him, and . . . oh, you get my point. LeMay had it all going, and my best guess is that no matter how good COVID-19 does in the futureâincluding getting up to speed with killing little childrenâitâs never going to measure up to him.

American Pravda: Holocaust Denial
Analyzing the History of a Controversial Movement
Ron Unz
• 2,327 Comments • Reply
← âMoneybullâ: An Inquiry Into Media ...Was "Eyes Wide Shut" a Cultural Watershed? →
Hide 24 CommentsLeave a Comment
"On COVID-19 and Curtis LeMay"
• 24 Comments
Commenters to Ignore
Commenters to ignore (one per line)

← âMoneybullâ: An Inquiry Into Media ...Was "Eyes Wide Shut" a Cultural Watershed? →
Current Commenter
says:
Current Date at Time Now
Leave a Reply - Comments on articles more than two weeks old will be judged much more strictly on quality and tone
Cancel Reply
Commenting Disabled While in Translation Mode

Subscribe to All Robert S. Griffin Comments via RSS
PastClassics

Netanyahu Warns Biden Not to Get Involved
But Biden gives Israel more weapons even as Gaza is bleeding
Philip Giraldi • May 18, 2021
• 1,900 Words • 5 Comments • Reply