Crooked Jew Grant Shapps and his little lapel-badge
◄►Bookmark◄❌►▲ ▼Toggle AllToC▲▼Add to LibraryRemove from Library • BShow CommentNext New CommentNext New ReplyRead More
ReplyAgree/Disagree/Etc. More... This Commenter This Thread Hide Thread Display All Comments
AgreeDisagreeThanksLOLTroll
These buttons register your public Agreement, Disagreement, Thanks, LOL, or Troll with the selected comment. They are ONLY available to recent, frequent commenters who have saved their Name+Email using the 'Remember My Information' checkbox, and may also ONLY be used three times during any eight hour period.
Ignore Commenter Follow Commenter
Search Text Case Sensitive  Exact Words  Include Comments
List of Bookmarks

Little things say a lot. And what they say, in our fallen world, is often very bad. Take the little lapel-badge sported in recent months by the British politician Grant Shapps (born 1968). Heâs an elite member of Britainâs woefully misnamed Conservative party. Heâs also a crooked Jew. Using the pseudonym Michael Green, he worked as an âinternet marketing salesmanâ for at least a year after he became a Member of Parliament, despite his public denials that he had done so. His activities as Green may have involved running a pyramid scheme and certainly involved concealing his real identity and selling useless self-help guides with titles like âStinking Rich 3.â

And what lapel-badge has the crooked Jew Grant Shapps been sporting in recent months? Itâs a British flag resting beside a Ukrainian flag. After all, Ukraine is run by crooked Jews and Shapps naturally feels a deep sense of solidarity with them. Heâs horrified by the Russian invasion that has violated Ukraineâs borders and threatens to remove Ukraine from the control of crooked Jews. And like his neo-conservative Jewish buddies in America, heâs happy to risk nuclear war in defense of Ukraine. At the same time, Shapps isnât worried at all about the unending violation of Britainâs borders by non-White migrants from countries even more corrupt than Ukraine. This non-White invasion doesnât threaten the control of Britain by crooked Jews. On the contrary, the non-White invasion enhances Jewish control, because the terrorism, crime and conflict it causes justify the surveillance-state and ever-harsher laws against free speech.

Thatâs why both the Conservative and the Labour parties have pretended for decades to care about White votersâ clearly expressed desire for less migration, while secretly being in favor of ever-increasing migration from the worst possible places. And the two parties have been happy to lie to their supporters. Peter Hitchens recently described their lies in the Sunday Mail:

Hereâs all you need to know about our big political parties and mass migration, now at astonishing levels. They favour it, but they want you to think they donât. I will never forget a wet Sunday many years ago when I went canvassing for a friend, who was trying to win a by-election in the Midlands. As it happens, he was standing for Labour, but I think the other lot would have done the same. Before we went out knocking on doors, we were told âIf they raise immigration, just tell them weâre against it.â (Peter Hitchensâ Blog, The Sunday Mail, 27th November 2022)

In fact, no, neither Labour nor the Conservatives are âagainst immigration.â Theyâre both very much in favor of it. And the worse the quality of the migrants, the more they like it. As Iâve remarked before at the Occidental Observer, if you searched the world to find the worst possible countries to take migrants from, Pakistan would be very near the top of the list. It has sky-high levels of corruption and rock-bottom levels of civilization. Among the few things that flourish in Pakistan are sex-crime, inbreeding, and extra-judicial execution for alleged blasphemy against the Prophet Muhammad. When Pakistanis migrate to the West, they bring all of that rich vibrancy with them. Pakistanis in Britain have committed many thousands of sex-crimes against White girls and women, imposed huge costs on Whites through theft, welfare-fraud, and tax-evasion, imposed more huge costs on the National Health Service with the horrible genetic diseases that result from their inbreeding, and attacked free speech by threatening or actually committing murder in Muhammadâs name. 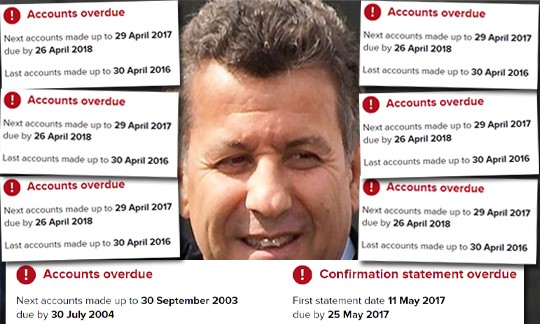 And what has happened to hugely harmful migration from Pakistan under Britainâs so-called Conservative government? It has massively increased. So has hugely harmful migration from the rest of the Third World. To understand why the so-called Conservatives donât want to conserve anything, you just have to look at who finances them and whose interests they serve. The current money-man of the Tories is an Israeli plutocrat called Ehud Sheleg, who is one of at least six very rich Jews who have served as Treasurer of the Conservative Party since the year 2000. As I described in my article âBooty without Scrutiny,â Sheleg is an Uber-Jew who has been seriously under-reported. The vast majority of British voters wouldnât even recognize his name, let alone be able to describe the huge power he wields at the heart of Britainâs governing party. They donât know that Sheleg was born in Tel Aviv and has openly stated that his first loyalty is to Israel, not Britain. In 2019 he told the Jewish Chronicle that âI was brought up, albeit in Israel, with the sentiment of very strong ties to Britain. In the family of nations, this has to be my favourite one. Second to my homeland, of course.â

And second to his pursuit of Jewish interests, of course. Thatâs why the Conservative party funded and controlled by crooked Jews like Ehud Sheleg is so much in favor of non-White migration. Jews believe that non-White migration into the White and historically Christian West is very much in their interests. They particularly like Muslim migration from countries like Pakistan. Many Jewish activists have stated that âJews and Muslims are natural allies.â Here are a few headlines about those Jews and their Islamophilia:

But against whom are Jews and Muslims ânatural alliesâ? That bit is left unstated, but the answer is obvious. Jews and Muslims are natural allies against White Christians. And when the natural alliance breaks down and Muslims attack Jews, that too can be turned to Jewish advantage. You can see how it works in a recent article by a dishonest, obese and ugly philo-Semite called Stephen Daisley, who writes for the cuckservative Spectator in Britain. As I described in my article âJeremyâs Jackboots,â Daisley looks very much like the giant slug-like Star-Wars villain Jabba the Hutt and behaves very much like a Jewish stereotype, with an unfailing self-righteousness and insistence that Jewish interests must be at the center of British politics. I suspect he is himself Jewish but prefers to keep quiet about it, like the highly crooked and possibly half-Jewish Denis MacShane, the disgraced ex-Labour MP for Rotherham who failed for decades to defend White working-class girls from rape and sexual exploitation in his own constituency. Meanwhile, MacShane worked diligently for rich and powerful Jews in far-off London right up until he was jailed for fraud in 2013. 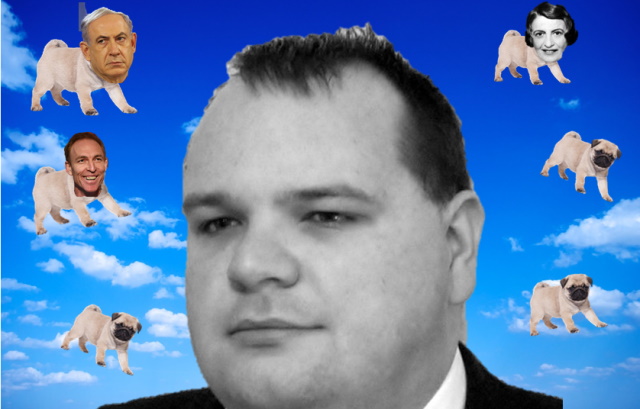 Stephen Daisley has the same priorities and the same dishonesty as Denis MacShane. Writing in the Spectator in January 2023, he announced that âChallenging anti-Semitism is a moral imperative for non-Jews.â Have you got that, goyim? Jews are powerless victims and desperately need your help. Daisley lamented that âAnti-Semitism in Britain reflects a mightier tide of anti-Jewish hatred sweeping the globe. In 2021, anti-Semitic incidents rose 29 per cent in Germany, 54 per cent in Canada, 74 per cent in France and 119 per cent in Austria.â In fact, âanti-Jewish hatredâ isnât âsweeping the globe.â It has increased in all the countries named by Daisley for one simple reason that isnât named by Daisley: Muslim immigration, which is engineered by and warmly supported by Jews, and which causes far greater harm to Whites. In other words, Daisley is calling for goyim to sympathize with Jews for âanti-Jewish hatredâ created by Jews themselves.

A grovelling goy with a Jewish wife

But tell me, Mr Daisley: where are under-aged Jewish girls being raped or exploited as child-prostitutes by Muslims on an industrial scale? Nowhere at all. Thatâs happening instead to vulnerable White girls, whom philo-Semites like Daisley and MacShane arenât concerned about in the slightest. Nor are politicians in the Jew-financed and Jew-controlled Conservative and Labour parties. And Labour wasnât concerned about White interests when it briefly escaped Jewish control under the Marxist Jeremy Corbyn. Now Labour are firmly back under Jewish control thanks to the replacement of Corbyn as party leader by the slippery lawyer Sir Keir Starmer, who has a Jewish wife and a clear understanding of whose interests he must serve if he wants friendly media coverage and a good chance to win the next general election. 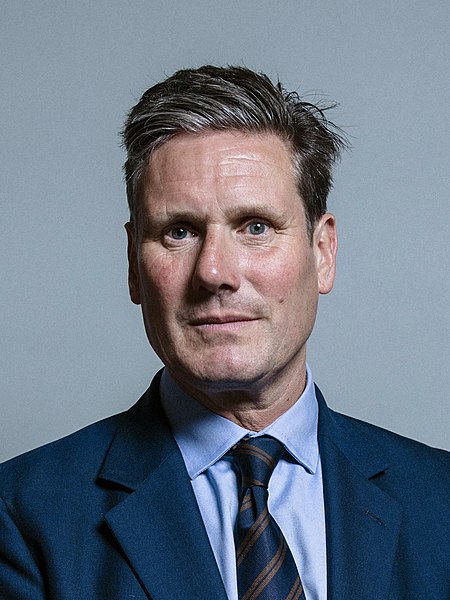 At the end of last year, Starmerâs goy-grovel was even more energetic than usual, as he saluted the dishonestly inflated Jewish festival of Chanukah in a video-message to Britainâs most self-important and self-serving minority. The Jewish Chronicle reported his sycophancy with relish: âI continue to be inspired by the Jewish community, its many acts of compassion and kindness, its service to Britain, and I am delighted to have strengthened my friendships with the community over the last year. Long may that continue. I wish you a joyous Chanukah. May the candles of this festival of light shine brightly and bring hope to us all.â Starmerâs chances of winning the next election are looking very bright too, thanks to his goy-grovel and to the thickening miasma of incompetence and exhaustion that now surrounds the Conservative party. For example, the Tories have utterly failed to end the flood of illegal migrants across the English channel.

But anyone who thinks Labour will try to end the flood or reduce migration is either stupid or delusional or both. As Peter Hitchens said: both Labour and Conservatives favor mass migration, but they want you to think they donât. As Peter Hitchens didnât say, this is because both Labour and Conservatives exist to serve Jewish interests, not the interests of the White majority. Thatâs why theyâre so concerned about Ukraineâs borders and so unconcerned about Britainâs borders.

The same is true of political parties in America. Like the ruling Tories in Britain, the ruling Democrats in America are happy to risk nuclear war in defense of Ukraine, but wonât lift a finger to defend their own country against invasion by illegal migrants. To understand why the left-wing Democrats and supposedly right-wing Conservatives both follow the same policies, you just have to ask who controls both those parties and whose interests they serve. The answer starts with âcrookedâ and ends with âJews.â Oppressed Jew Is Watching You
What Orwell Got Wrong in his Dystopian Satire Nineteen Eighty-Four
Tobias Langdon
• 244 Comments • Reply
← Facial, Racial, Spatial: How Human Face...Strength Through Oy-Veh! →
Hide 162 CommentsLeave a Comment
"Nukes for Ukraine, Nix for You Goyim"
• 162 Comments
Commenters to Ignore
Commenters to ignore (one per line)