The New York Times is attempting to destroy the life of researcher Michael Woodley of Menie (itâs a Scottish courtesy title), whom weâve cited many times, for the crime of being quoted by a teenager who allegedly committed a racially-motivated mass murder in Buffalo.

BRUSSELS â The researcher claims there has been an I.Q. decline in France linked to large-scale migration from North Africa. He has co-written a book about the global decline of intelligence, stating a relationship between ethnicity and cognitive abilities. And he argues that humans can be divided into subspecies, a cornerstone of white supremacist ideology.

He was also cited, among other academic references, in a manifesto written by the teenager motivated by racist views who killed 10 Black people at a supermarket in Buffalo last month.

Despite his own extreme [sic] views, the researcher, Michael Woodley â a 38-year-old British man â has been affiliated with Vrije Universiteit Brussel, one of Belgiumâs leading universities, and his controversial work was originally undertaken as he studied at some of the worldâs most prestigious academic institutions.[More] A Racist Researcher, Exposed by a Mass Shooting, by Monika Pronczuk and Koba Ryckewaert, June 9, 2022

Woodleyâs research finds differences between races, as any honest researcher must. And heâs obviously not responsible for being quoted by a stranger in another country (which he wasnât really, see below)

How does a teenager get involved in high-level arguments about race and âsubspeciesâ?

Answer: He doesnât. He copies and pastes a common graphic he found on the internet called âThe Truth About Race.â Itâs all over the internet: here, and here. This one is probably the highest resolution available:

I know this wasnât written by an eighteen year old with no college education, and I also know itâs been on the internet since 2017, if not before, because it was analyzed by an academic in November 2017, when Gendron (the shooter) would have been 13. See IN PICTURES, Virginia Commonwealth University Digital Sociology, October 10, 2017 , where itâs described as a

â¦graphically unsophisticated infographic (with slight variation as individual slides) of unknown origin floating around on online discussion boards and message forums, usually as âproofâ about the biological basis for race.

Nevertheless, the plain fact is that the âproofâ on the infographic is fundamentally right and hence is supported by respectable citations. It is presumably the work of some Human Biodiversity enthusiast, possibly an academic, who posted it online anonymously to avoid being Cancelled.

And who can blame him (or possibly her)? The New York Times is indeed now trying Cancel a one carefully-targeted person who was cited in it.

âMythsâ in this infographic for which Woodley deserves no blame, and the teenage gunman deserves no creditâhe didnât necessarily even read it, just copied and pasted itâinclude âRace has no biological basisâ (sourced to Science magazine), âRace is only skin-deepâ (sourced to BMC Evolutionary Biology), âRaces have more variation within them than between themâ(sourced to Genetics magazine), and âThere isnât qualitative genetic evidence for racial differencesâ (source to eight different studies, including some by Italian anthropologist Davide Piffer, but Iâll just linked to this one in Human Molecular Genetics, because that will mean three out of four will be by Chinese authors). 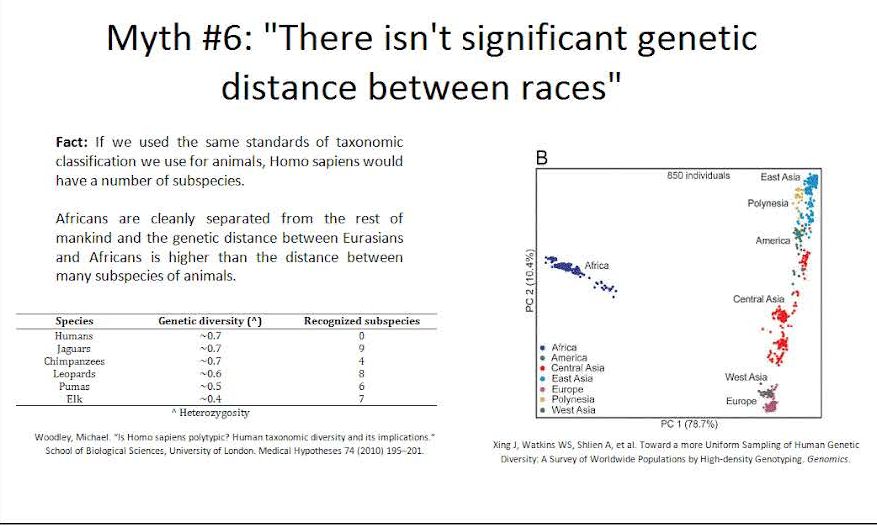 In order to make this into attack on Michael Woodley, the New York Timesâ Pronczuk and Ryckewaert, had to do what I just didâfind the shooterâs manifesto online (not easyâitâs here [PDF]), locate the copypasta graphic on page 17 (some of the least hateful material in the manifesto) enlarge it until they could see the citations, and then (in their case) ignore all the Chinese authors in an attempt to Cancel Woodley.

Note: the New York Times did not actually link to the shooterâs manifesto or the infographic above (what is it afraid of?). Youâre supposed to take its word for all this.

And it is very much trying to cancel Woodley, in the sense of ruining him professionally and suppressing his research:

âWoodley has been explicitly racist,â said [Alex Mas Sandoval, a Spanish researcher in population genetics at the University of Bologna, who started an online petition to get the British researcher suspended and his Ph.D. revoked. Mr. Woodley has received degrees from Columbia University and from Royal Holloway, University of London. âHe has a history of spreading racist, white supremacist theories,â Mr. Sandoval said, adding, âHe is questioning a consensus based on decades of research.â [Emphases added.]

Well, actually, no. Itâs a âconsensusâ based on decades of (a) pious hope and (b) intimidation.

At the core of Mr. Woodleyâs article cited by the gunman is an argument that human beings can be scientifically divided into subspecies. One table in which he compared humans with a number of animal species, including jaguars and leopards, was used in the Buffalo gunmanâs manifesto. [Link in original].

Well, no, it wasnât. The New York Timesâ writers mean the table and accompanying text displayed above as âMyth #6â.

What the NYT is linking in its quote above to Woodley’s Is Homo sapiens polytypic? Human taxonomic diversity and its implications, Medical Hypotheses, Volume 74, Issue 1, January 2010, Pages 195-201.

The text in the infographic, in which the anonymous creator put the case for âpolytypicityâ much more polemically than Woodley would have done, is not in the linked article, but neither is the table.

This is the actual table created by Woodley:

Woodleyâs table is much more nuanced. But the point is that the New York Timesâ Pronczuk and Ryckewaert just carelessly referenced to a simplified version for which Woodley was not responsible.

But you canât figure that out by clicking on the New York Timesâs links, because not only do the writers not link to the shooterâs âmanifestoâ or to the Woodley-quoting infographic, they link to a paywalled version of Woodley’s article. (My own link above goes to a PDF.)

And hereâs something else the New York Times missedâthereâs no reference in Pronczuk and Ryckewaertâs article that the New York Times itself was cited in the shooterâs manifesto. Surprising, because itâs on the same page of the killerâs PDF as the obscure reference to Woodleyâs work, as seen in this screenshot: 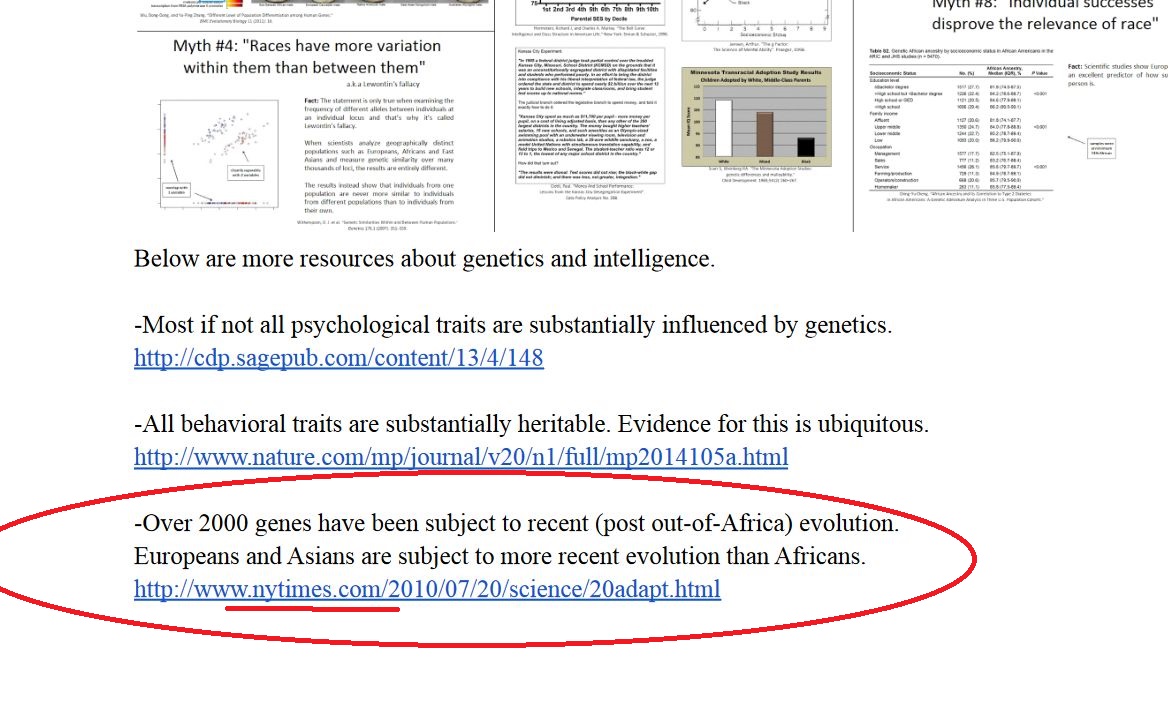 This is a reference to an article about mainstream science from an impeccably Politically Correct source: the New York Times itself! Itâs a link to Adventures in Very Recent Evolution, by Nicholas Wade, The New York Times, July 19, 2010.

Once again, this doesnât show the 18-year-old murderer was a New York Times subscriber, or reader. Itâs copied and pasted, as Googling âOver 2000 genes have been subject toâ etc., shows, from an obscure âHatefactsâ site, also anonymous. [Archive link.]

And the â2000 genesâ quote is not a bad paraphrase of what Nicholas Wadeâs 2010 article said. Discussing this article in 2010, Steve Sailer pointed out that

â¦spent the last decade (here are VDARE articles I wrote praising Wade’s NYT work in 2003 and 2006) diligently debunking the reigning dumb ideas of our age, such as “Race doesn’t exist,” “Race is just skin deep,” and “Racial differences couldn’t have evolved because there hasn’t been enough time.” For nine or ten years, he has used dozens of New York Times articles to aim a firehose of the latest scientific findings at these dogmasâ¦and, as far as I can tell, nobody ever notices. [Emphasis Sailerâs]

And thereâs a lot more of the science of Human Biodiversity in the New York Times website in the archive of Nicholas Wadeâs articlesâe.g. Human Culture, an Evolutionary Force, March 1, 2010, about lactose toleranceâthan there is in this shooterâs âmanifestoâ.

We made this point in our lawsuit against the Times for calling us âwhite nationalist,â partly on the grounds that we write about race and IQ.

Our brief [PDF] said âBut consistent with its commitment to free speech, Defendant [I.E. the New York Times Co] itself has in the past bravely pushed the boundaries of the taboos on race. For exampleâ¦.â

And we listed seven Genome Mappers Navigate the Tricky Terrain of Race, Study Finds Genetic Link Between Intelligence and Size of Some Regions of the Brain, Race Is Seen as Real Guide to Track Roots of Disease, A New Look at Old Data May Discredit a Theory on Race, The Palette of Humankind, Gene Study Identifies 5 Main Human Populations, and 2 Scholarly Articles Diverge on Role of Race in Medicine, all by Wade

We used these as evidence not because Wade is some kind of secret racist, or because the New York Times, as the publisher of these articles, is propagating theories that have âlong been a mainstay of pseudoscientific attempts to justify slavery, colonialism, and Nazism that have been widely rejected by contemporary mainstream academicsâ as Pronczuk and Ryckewaert say in their article about Michael Woodley.

We cite them because that is in fact the state of science these days.

âAnd yet it movesâ said Galileo, after pretending to recant the motion of the earth, and the New York Timesâs Amy Harmon (the anti-Nicholas Wade) was furious when people said it about race and IQ:

1) Lots of scientists in my feed saying âabout timeââ with regard to Cold Spring Harbor Labâs severing of final ties to Jim Watson. But also lots of people saying Watson is being persecuted for unpopular scientific opinions âjust like Galileo.ââ https://t.co/umNgxhjLpv

Let me repeat: neither the New York Times nor Michael Woodley is in any way responsible for the Buffalo gunman quoting them.

Nor is Ta-Nehisi Coates responsible for the black gunman who murdered three cops (correction, four cops, one just died of wounds after 6 years of suffering )in Baton Rouge, though Coatesâs bookâa genuinely hateful productionâwas on the gunmanâs reading list. (See Ta-Nehisi Coates Only #2 on Baton Rouge Terrorist’s Recommended Reading List, by Steve Sailer in 2016.)

The fact that a writer is quoted in some manifesto, as happened to various neoconservative writers in the case of Norwegian Rightist terrorist Anders Breivik, is not his fault, any more than the New York Times is guilty of mass murder because the guy in Buffalo quoted them. (Breivik quoted the New York Times website seven times, on anti-Muslim reportage going back to the Armenian Genocide of 1915.)

Facts are facts, whether reported by Michael Woodley of Menie or, grudgingly, by the New York Times.

And it is to facts to which we all must ultimately respond.

James Fulford [Email him] is writer and editor for VDARE.com.