Many were expecting a pandemic baby bust but overall the pandemic had less of an impact on fertility than anticipated. While the increase in White fertility was modest, it contradicts a lot of the demographic doom and gloom narrative. The slight increase in White fertility appears to be more among affluent Whites, and my personal observation has been of an increase in pregnant White women in affluent areas in California. This trend is likely due to remote work benefiting upscale Whites more than other groups, enabling mothers to stay at home with babies and those moving from cities to more family oriented suburban areas. An increase in older mothers having more children at the margin could also be a factor. Latinos were disproportionately impacted by the pandemic and there was initially a dip in Latino fertility. The recent rise could be a recovery from the pandemic decline, plus the recent surge in foreign migration. Urbanization tends to suppress fertility, and the Asian and Black fertility decline, reflects that those two groups are heavily urbanized. 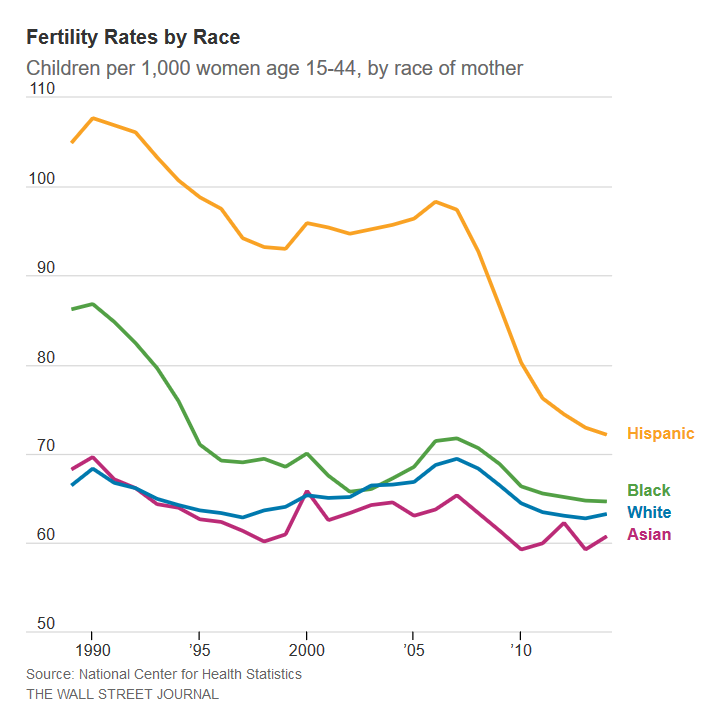 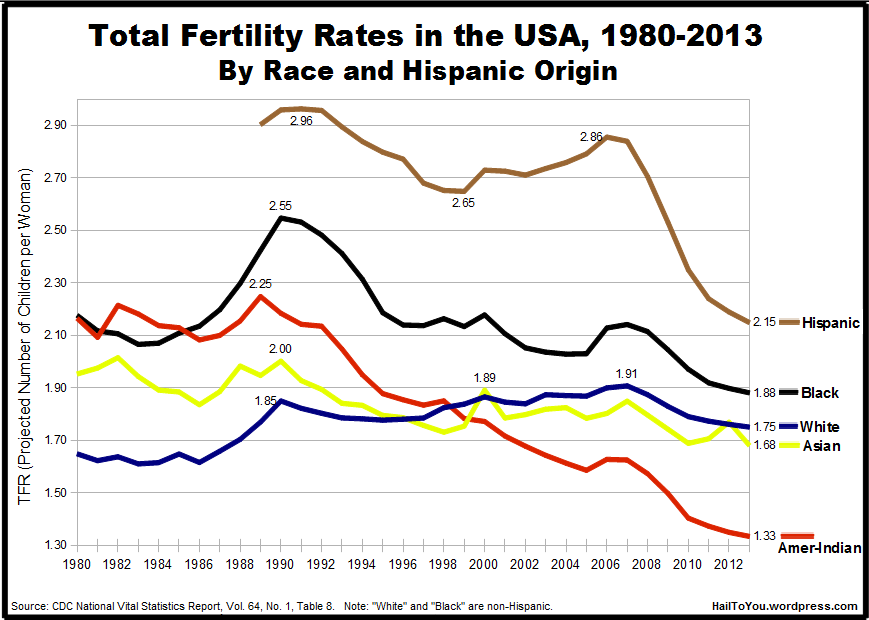 The 884,726 Hispanic births in 2021, were a substantial decline from 918,447 in 2016, and from 945,180 in 2010. Hispanics births also declined by 5.63% from 2016 to 2020. Hispanics fertility was 2.96 in 1990, remained fairly high throughout the 90s and into the 00s, then declined sharply after the 08 housing bubble crash, which impacted Hispanics much more than other groups. Hispanic fertility was at 2.09 in 2016, and then dipped below replacement in the late 2010s, reaching 1.95 today. There is a disparity between native born Hispanic fertility at 1.71 and foreign born at 2.18 (2019) but also a much bigger decline in foreign born fertility, that is converging with native rates. An American Community Survey from 2015 to 2019 placed those of Mexican ancestry at 1.84, while the highest fertility Latino ancestry groups were Guatemalans at 2.58 and Hondurans at 2.67, though likely significantly lower today.

A lot of racial stereotypes about fertility are outdated. In fact fertility is now declining the most among non-White women. There are parrels to Brazilâs fertility decline, which is driven by non-White rates converging with White rates. Non-Whites are still growing more than Whites numerically and have higher fertility rates but are also declining at a faster rate than Whites, whose fertility shows signs of stabilization and recovery. There are limitations to relying upon past trends to predict the future, as all groups are undergoing fertility transitions at different rates. There is even speculation that Whites are at a long-term advantage over other groups by undergoing their fertility transition earlier, even though they hemorrhaged a lot of their population, which the recent albeit modest bump in White fertility points to. If immigration were shut down, then Whites could be at a long-term demographic advantage over non-Whites.

There is a hypothesis that fertility is heritable, based upon inborn genetic traits rather than external social factors. Since modern society has many anti-natalist selection pressures, those who are not genetically selected to want children are being shredded from the gene pool and the genes of those who are wired to reproduce more will become more pronounced in future generations. In the past, the lack of birth control and social pressure to reproduce meant that almost everyone reproduced regardless of genetics. The theory predicts that the selection for fertility means that fertility will rise in the future among demographics that declined first, and thus have an advantage over groups that underwent the cycle latter.

There is extensive data to back up this hypothesis, such as Jason Collins and Lionel Pageâs research for the Institute for Family Studies that accounts for heritable fertility preferences. A Forbes article states that their research theorizes that âas soon as individuals exercise choice over how many children they wish to have, then fertility does become heritable.â Lionel Page states that âThe argument is straightforward: countries will likely experience a rebound in fertility after the demographic transition because new generations are from family with higher fertility & fertility is heritable,â and that âWe should expect fertility to rebound in developed countries which have completed their demographic transition, like in North America and Europe.â 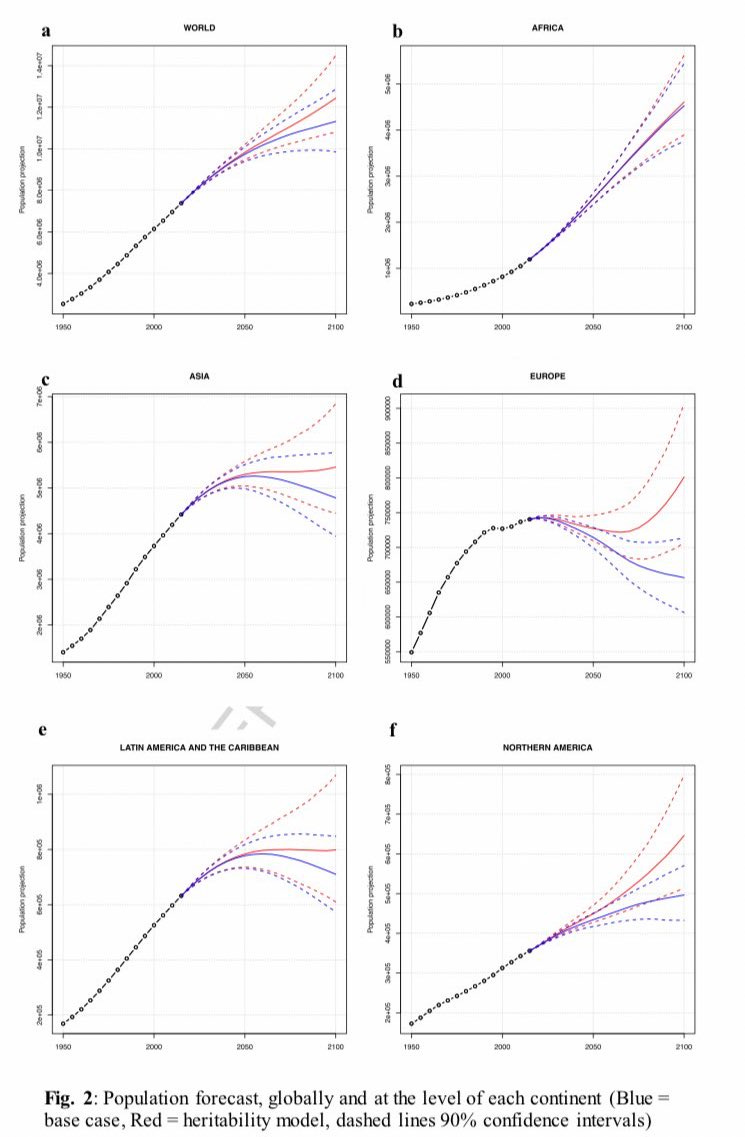 The Forbes article states that the research by Collins and Page âcalculates that the world fertility rate, which now stands at 2.52 (as of the period 2010 – 2015) and is forecast to drop to 1.83 in 2095 – 2100 in the baseline UN forecast, will, in fact, continue to drop, but eventually, as this evolutionary impact comes into play, birth rates will rebound to slightly above replacement level, at 2.21. At a regional level, European fertility rate is forecast to reach 2.46 instead of 1.83, and North American fertility, 2.67 rather than 1.85.â Until this study, most mainstream fertility projections, including the United Nationsâ, assumed that the trend of fertility decline will continue indefinitely.

Russian blogger Anatoly Karlin has also written extensively about fertility being hereditable, pointing to charts that show that âactualized fertility tends to lag desired fertility by approximately 0.5 children.â Karlin also points out that Haredi Jews in Israel, who have a TFR of 7, live in a very densely populated environment that would usually be bad for fertility. The Twitter account Birth Gaugeâs research on the theory assumes a heritability of fertility for Finland at +0.32 children per generation, Canada +0.27, USA +0.27, Japan +0.27, Germany +0.26, UK +0.25, Spain +0.22, France +0.22, Sweden +0.21, Italy +0.21, Russia +0.19, Czechia +0.19, South Korea +0.19, and Portugal +0.17. This data predicts a higher long-term fertility rate for Canada, Japan, and Germany, even if these nations currently have low fertility.

Anatoly Karlinâs strongest case for the theory is historic trends in Europe, contrasting France, which was the first major European nation to undergo demographic decline, and went from being Western Europeâs most populated nation in the 18th to 19th Century, but was surpassed by Germany. However, today France has much healthier fertility than other European nations such as Germany, which underwent the transition much latter. Karlin also points to Russia which had a fertility rate of 1.1-1.3 after the fall of the Soviet Union but then peaked at 1.8 children, a couple of years ago, though recently declined to 1.6. Of all European nations, Czechia had the most notable rebound in fertility, falling from 1.1 at the fall of Communism to about 1.8 today. Another success story is Denmark whose TFR rose from 1.38 in 1983 to 1.72 in 2021. This year, the only EU nations to buck the trend of fertility decline are Romania, Bulgaria, and in France, where births were up 2.2%, in the first half of 2022, from 2021. One of the biggest declines in Europe, has been in the UK, where until recently had much higher fertility than most of Continental Western Europe, which shows how the UK is late to go through the transition.

Even factoring in the differences between native vs. immigrant fertility, most of the fertility increase in France was in rural areas, especially in the South and West, that are populated by native French. The biggest decline in Franceâs fertility was in the immigrant heavy suburbs of Paris. Fertility is generally higher among immigrants than native s in Europe, with a few exceptions such as Iceland and Denmark, where it is close. However, in many European nations, foreign fertility is declining at a much faster rate than among natives. For instance in Sweden, immigrants still have substantially higher fertility than natives but are converging with native fertility rates. The native Swedish rate actually grew more despite high levels of immigration. Also in Belgium, fertility rose from 1.43 to 1.49 for citizens from 2020 to 2021 but declined from 2.13 to 2.11 for foreigners. Even in Germany, births briefly increased for German mothers, but declined for foreign mothers, though native births have declined more recently. 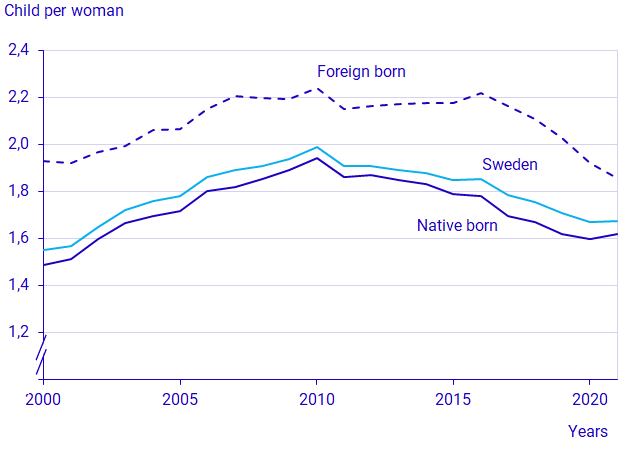