Europe, yummy!
◄►Bookmark◄❌►▲ ▼Toggle AllToC▲▼Add to LibraryRemove from Library • BShow CommentNext New CommentNext New ReplyRead More
ReplyAgree/Disagree/Etc. More... This Commenter This Thread Hide Thread Display All Comments
AgreeDisagreeThanksLOLTroll
These buttons register your public Agreement, Disagreement, Thanks, LOL, or Troll with the selected comment. They are ONLY available to recent, frequent commenters who have saved their Name+Email using the 'Remember My Information' checkbox, and may also ONLY be used three times during any eight hour period.
Ignore Commenter Follow Commenter
Search Text Case Sensitive  Exact Words  Include Comments
List of Bookmarks

My position on the Ukraine is based on my understanding of political geography, the dynamics of history, and the peculiar problems of Europe.

One hundred and eight years ago, Europe was supreme, and, if old photographs are anything to go by, the World was largely heading in the right direction.

Of course, there were many problems in the pipeline — growing national egoism, the challenges of greater social equality between the classes and sexes, how to replace our moribund Christian morality, without becoming total degenerates, etc., etc. — but things were generally proceeding nicely. Then we decided to have a 40-year-long civil war followed by another 40 years of Cold War.

The effect of all that was the almost complete downfall of Europe.

Why did that happen? This question is something of a bottomless pit, but taking a macro-empirical view, in order to save time, it was because the balance of power became too unbalanced. There were two aspects to this — Germany and Russia: Germany became too powerful too soon (thanks, Napoleon III!) and lacked the nuanced and sensible leadership to manage this unsettling change; while Russia was already too big, and, with the advent of modern technology, was only going to become even more powerful.

This unbalancing of power led to Germany grasping at even more power and then other powers lunging to prevent Germany getting even stronger. The result was an 80 year period of European degradation. But the 40-year European Civil War and the 40-year Cold War did achieve two positives. The first one clipped Germany’s imperialistic wings — almost off at the base — while the second one did something similar, but not as extreme, for Russia.

After this 80-year period of suffering, Europe had assumed a shape that was essentially much more balanced. In 1991 the possibility of either Germany or Russia becoming dominant and thus provoking counter movements that could lead to war (and the further reduction of European power and status) was far removed.

Germany, without Austria and the Eastern 20-25% of its territory that it lost in 1945, but with a potent guilt complex, became a manageable and stable geopolitical factor (although with severe toxic effects on its culture and society). Likewise Russia without Estonia, Latvia, Belarus, Ukraine, Georgia, Armenia, Azerbaijan, and the Central Asian states and its weak economy, was no threat to the European balance of power.

Both WWII and the Cold War, despite their enormous costs, contributed to the creation of a geopolitically stable framework that has the potential to allow Europe to avoid further serious infighting, and thus allow it to focus more on the real challenges of being embedded in the toxic, materialistic, atomised, liberalist culture and civilisation of the wider West.

An important part of this stability was the avoidance of revanchism in the two main destabilising entities of the European order — Germany and Russia.

But such is not the case with Russia.

To his credit (sort of) Vladimir Putin has contributed to the stability of Europe by preventing Russia from achieving its economic potential through his system of short-sighted oligarchical corruption and resource extraction at the cost of true economic development. This has kept Russia weaker than it otherwise would have been, and added to the security of its Western neighbours.

But, unfortunately, this is only half of the picture.

Most ex-Soviet and ex-Eastern bloc states in Eastern Europe, blighted by 40 years of Cold War communism, have been making enormous economic gains through real economic development, in contrast to Russia, which has only been able to boost living standards and its military through natural resource extraction. But some of them are still economically very weak, most notably the ones that failed to shrug off the bear paw of Russia early on. These include Belarus and the Ukraine itself, which has only been outside Russia’s domineering sphere of influence since the Ukrainian Revolution of 2014. Right now Putin is trying to use this weakness to build up Russian revanchism. He seeks nothing less than Russian domination of Belarus, which he already has, and the Ukraine, which he does not yet have. His attempt to actually get that, and the West’s dialled-in attempts to prevent it is the cause of the present instability. But if Putin were to achieve his goals and then be succeeded by a leader who actually knew how to develop Russia’s enormous economic potential, then Europe would be heading once more into a “balance of power” crisis on a par with 1914. Russia, with Belarus and the Ukraine under its belt, would not only be too big again, but it would also be too powerful for the small, perpetually squabbling states of Europe to resist. This would create the conditions for long-term, radical geopolitical instability.

My own personal “minority view” is that such a prolonged threat might have a useful detoxifying effect on LGBTQ+ uber-feminist Europe, but the more likely effect is that Europe would come to depend more and more on the toxifying superpower of the “Great Gay Satan on the Potomac.”

If, however, real geopolitical stability could be achieved in Europe, then NATO and the unhealthy dependence on American power could be discarded.

But this would require a few things — namely, a strong, independent and economically developing Ukraine, the same for Belarus, a strong Poland, the resolution of certain “territorial issues” (Crimea, Transdniestria, Kaliningrad, etc.), and, most of all, a Germany that was not revanchist in any way, but no longer buried under mountains of guilt to the point of geopolitical impotence, effectively serving as the hole in the European donut. 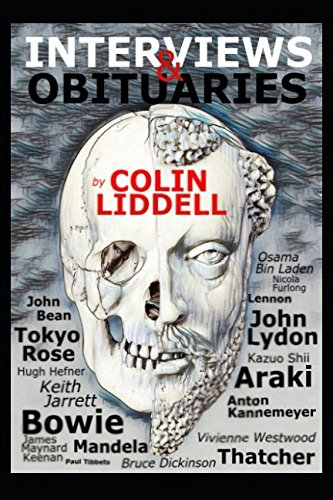 Colin Liddell is the Chief Editor of Affirmative Right and the author of Interviews & Obituaries, a collection of encounters with the dead and the famous. Support his work by buying it here (USA), here (UK), and here (Australia). He is also featured in Arktos’s 2016 collection A Fair Hearing: The Alt-Right in the Words of Its Members and Leaders. ← Israel Is a Giant Machine for Generatin...
Current Commenter
says:
Current Date at Time Now
Leave a Reply - Comments on articles more than two weeks old will be judged much more strictly on quality and tone
Cancel Reply
Commenting Disabled While in Translation Mode

Subscribe to All Colin Liddell Comments via RSS
PastClassics