Donald Trump is a Narcissist. Everybody knows that, because the Main Stream Media says so. Is Trump a Pathological Narcissist? headlined a series of New York Times letters to the editor. [October 20, 2019] We Are All at the Mercy of the Narcissist in Chief proclaimed a New York Times opinion piece [October 11, 2019]Googling âDonald Trump narcissistâ currently [6 PM, November 30, 2019] produces 1.4 million results, as opposed to 418, 000 for âHillary Clinton narcissist.â Yet the evidence is clear that Clinton, rather than Trump, exemplifies this personality disorder.

In case the New York Times was too subtle for you, let me be clear: The Donald is a Narcissist. According to the Diagnostic and Statistical Manual of Mental Disorders, âNarcissistic Personality Disorderâ is defined by a series of traits: Grandiosity, bullying, exploiting others, low empathy, fantasies of power, self-perception as unique, a need for continual admiration, a sense of entitlement and intense envy, along with the belief that others are envious of you [Diagnostic and Statistical Manual of Mental Disorders, 2013, pp. 669â72]. And itâs not just the New York Times that is certain of this, itâs also The Atlantic [Unfit for Office, by George T. Conway III , October 3, 2019].

We get it. Trump has a personality disorder. The MSM says so.

But imagine if Trump had stood for president against someone who was so âinconsolableâ at losing that she couldnât bring herself to concede publicly on Election Night, as custom dictates. Imagine if she was so emotionally unstable that, when she realised sheâd lost, it was âhard to understand what she saying, she was crying so hardâ [Hillaryâs Last Hurrah, by Regina Graham and Geoff Earl, Mail Online, November 11, 2016]. What if this candidate had, upon realising sheâd lost, got drunk, blamed her staff, had a huge temper tantrum and even threw things at them? [Where Was Hillary? by R. E. Tyrell, American Spectator, November 15, 2016].

Surely, such a person has some form of arrested development and is as much, even if not even more, âunfit for officeâ than Donald Trump? 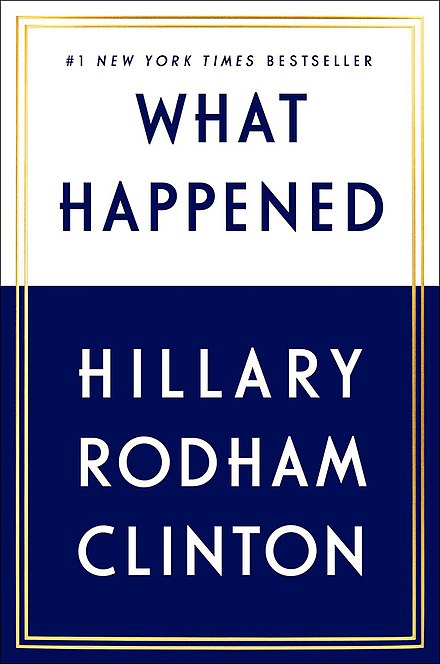 And, although shielded by the MSM, this personâs behaviour since the 2016 Election has been bizarre, completely out of the norm for defeated U.S. Presidential candidates. In her What Happened, her campaign book published in September 2017 , she blatantly insinuated that Russian âhackersâ (the Democrat term of art to describe Russian influence, apparently deliberately chosen for its computer connotations) had penetrated U.S. voting systems:

Because no evidence has emerged yet [my emphasisâLW] of direct vote tampering, some critics insist that Russian interference had no impact on the outcome at all â¦for those obsessed with actual tampering, since we keep learning more about Russian intrusions into our election systems, maybe this is what the administration and Secretaries of State across the country should be investigating instead of a nonexistent epidemic of voter fraud.

And in late 2019, long after the Russian Collusion hoax had been utterly discredited by the Mueller Report, this person continued to insist that Trump as âan illegitimate Presidentâân.b. not just politically misguided, but illegitimate.[Hillary Clinton: “Trump Knows He’s An Illegitimate President,” “Insomuch As He Has A Conscience”, by Tim Hains, RealClearPolitics, September 29, 2019]

VDARE.com Editor Peter Brimelow presented evidence in 2017 that Hillary Clinton displayed symptoms of Narcissistic Expectations Syndrome. But significantly, and ignored by the MSM, many psychologists had concluded years earlier that, to say the least, Hillary Clinton is high in âNeuroticismâ (mental instability) and some have specifically argued that sheâs a âNarcissist.â

During the 2016 election campaign, Danish-American philosopher of psychology Berit Brogaard actually published The Deviant Psychologies of Donald Trump and Hillary Clinton [Psychology Today, October 29, 2016] which merely compared Trump to âMr. Big,â Carrieâs boyfriend in Sex in the City, but compared Hillary to Patty Hewes, the hardened lawyer from Damages. Patty is a devious and aggressive attorney, focused on bringing down powerful people who torment others. According to Brogaard:

Clinton and the fictional character Patty Hewes share several personality characteristics, one being their keen sense of justice and their fairly high score on a personality trait known as neuroticism.

Neuroticism is one of the Big Five personality traits used by psychologists. It means that you feel negative feelings strongly; making you prone to anxiety, depression and even rageâsomething that Election Night 2016 demonstrated is true of Hillary. The others are Agreeableness (altruism and empathy), Conscientiousness (rule-following and impulse control), Extraversion (feeling positive feelings strongly) and Openness (being open to new things). [This is discussed by Daniel Nettle in his book Personality, especially Chapter Seven].

âBoth Clinton and Pattyâ continues Brogaard âseem to channel their neuroticism into their work and dedication to a just society. Like Patty Hewes, Clinton is also often accused of using âunderhanded and unscrupulous methods.ââ

Another Big Five personality trait: Agreeableness. Brogaard explains that Trump appears to deliberately adopt a âdisagreeable persona,â implying that itâs an act and that he may not actually be that âdisagreeableâ one-on-one.

Hillary, by contrast, simply comes across as being genuinely low in Agreeableness,âsomething, by the way, which is a key aspect of Narcissism. For this reason, explained Brogaard, âMany voters want to like her but they consistently hit a bump in the road.â

Consistent with her low Agreeableness, notes Brogaard, âClinton doesn’t always come across as having integrity. Her integrity was questioned, for instance, in the Benghazi attack . . .â The fact that she âstood by [Bill Clintonâs] side in spite of his distasteful sexual engagement with Monica Lewinsky,â seems to imply, argued Brogaard, a lack of integrity as well. Most women would leave such a man, but Hillary didnât, presumably because she calculated it would aid her political career to stick with him.

For all we know, Trump may be a fair boss and sentimental at heart, even though we rarely see even a small glimpse of this in the media coverage of the election. Clinton may be far less conscientious and agreeable than she lets on.

In other words, perhaps Hillary is the Narcissist and Trump simply adopts a Narcissistic persona because he thinks itâs useful in the world of business and politics.

Even psychologists who deny that Hillary is a Narcissist are compelled to concede that she has a strong sense of âentitlementâ [see Hillary Clinton: âDeranged Narcissist?â By William Schutz, Psychology Today, June 10, 2008].

And other psychologists are quite open in their conclusion that Hillary has some kind of Narcissistic Personality Disorder and have even written academic papers on the subject. Thus political psychologist Aubrey Immelman analysed biographical sources to gage Hillaryâs personality type:

Clintonâs predominant personality patterns were found to be Ambitious/self-serving (a measure of narcissism) and Dominant/controlling, infused with secondary features of the Conscientious/dutiful and Retiring/reserved patterns and some indication of Distrusting/suspicious features. In summary, Clintonâs personality composite can be labelled elitist narcissism, or, in political terms, as the profile of a deliberative high-dominance introvert â deliberative by virtue of her substantial conscientiousness.[The Political Personality of 2016 Democratic Presidential Nominee Hillary Clinton, October, 2016]

So, according to Immelman, Hillary can be understood as at least a semi-Narcissist.

Hillary, they concluded, has the Narcissistic traits outlined above. She genuinely has pathologically high self-esteem, for example.

Personally, Iâm not sure Hatemi and ZoltÃ¡n are right on this one. According to Brogaard, âVulnerable narcissism reflects introversive self-absorbedness, high neuroticism, hypersensitivity even to gentle criticism, and a constant need for reassuranceâ whereas âGrandiose Narcissismââwhat we normally think of when we think of Narcissismâis quite the opposite and seems much more in line with Trumpâs assertive persona [Vulnerable Vs Grandiose Narcissism: Which Is More Harmful?, By Berit Brogaard, Psychology Today, June 23, 2019].

However, according to another study, at very high levels of Narcissism, the âgrandioseâ and âvulnerableâ kinds cease to be distinct. People who are very high in Grandiose Narcissism are also high in aspects of âvulnerable Narcissism,â such as mental instability. In other words, at high levels, the two constructs kind of merge [The Higher the Score, the Darker the Core, By E. Jauk and S. Kaufman, Frontiers in Psychology, 2018].

There is some evidence that childhood emotional neglect is associated with Narcissistic Personality [see A Surprising Cause of Narcissism, By Jonice Webb, PsychCentral, September 17, 2018].

In this regard, it may be relevant that Hillaryâs mother, Dorothy Howell, had an extremely traumatic childhood herselfâthe kind that might make you an emotionally distant parent. According to Wikipedia, Howellâs parents, who divorced in 1927 when she was 8, had violent fights. She moved around frequently, and was partly raised by abusive and unloving grandparents who confined her to her room for an entire yearâother than to go to schoolâfor going trick-or-treating.

But whatever the cause, there is a sound case for arguing that it is Hillary, not Donald, who is the Narcissist.

If Narcissism makes you âunfitâ to be president, then thank God for the democratic sophistication of the Electoral College. ← Some Countries Are Just Prone to Scient...Women In Universities (IUâs Provost L... →
Current Commenter
says:
Current Date at Time Now
Leave a Reply - Comments on articles more than two weeks old will be judged much more strictly on quality and tone
Cancel Reply