I have always been very fond of this photo, for reasons which are perhaps obvious. We are left to right Celia, Stuart, Neil, Craig and throughout our childhood we really were that close and that happy. The reason that I post this now is that my mother always told me she was amazed how good we looked in the photo, because it was taken when we were all off school sick with Hong Kong flu.

The Hong Kong flu pandemic of 1968/9 was the last really serious flu pandemic to sweep the UK. They do seem extraordinarily regular â 1919, 1969 and 2020. Flu epidemics have much better punctuality than the trains (though I cheated a bit there and left out the 1958 âAsian fluâ). Nowadays âHong Kong fluâ is known as H3N2. Estimates for deaths it caused worldwide vary from 1 to 4 million. In the UK it killed an estimated 80,000 people. 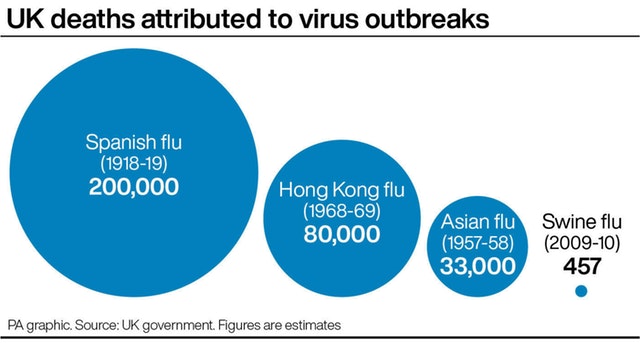 If the current coronavirus had appeared in 1968, it would simply have been called âfluâ, probably âWuhan fluâ. COVID-19 may not be nowadays classified as such, but in my youth flu is definitely what we would have called it. The Hong Kong flu was very similar to the current outbreak in being extremely contagious but with a fairly low mortality rate. 30% of the UK population is estimated to have been infected in the Hong Kong flu pandemic. The death rate was about 0.5%, mostly elderly or with underlying health conditions.

But there was no massive panic, no second by second media hysteria, over Hong Kong flu. Let me start being unpopular. âMan in his 80âs already not very well from previous conditions, dies of fluâ is not and should not be a news headline. The coverage is prurient, intrusive, unbalanced and designed to cause hysteria.

Let me make this important statement. I write as somebody whose heart and lungs are damaged and in poor condition, following the multiple bilateral pulmonary emboli which nearly killed me in 2004, which mysteriously appeared at precisely the time the UK and US governments were desperately trying to get rid of me as Ambassador, just a couple of weeks after I had been finally cleared of all the false charges with which the British government had attempted to fit me up. I was in a coma for days and subsequently given a maximum of three years to live (read Murder in Samarkand for the full story). If I get COVID-19 I expect I shall be fairly quickly gone off on my next adventure.

But I am OK with that. I have lived an incredibly full and satisfying life. I have no desire whatsoever to die â I have a wife and children I love deeply and I have important political battles I wish to fight. But human beings are not supposed to live forever and one day my time will come.

What worries me about the current reaction to coronavirus, is that it seems to reflect a belief that death is an aberration, rather than a part of the natural order of things. As the human species continues to expand massively in numbers, and as it continues casually to make other species extinct, it is inevitable that the excessive and crowded human population will become susceptible to disease.

As we see the catastrophic effects of human beings on the environment, including on other species and the climate, I am genuinely perplexed as to what are the underlying assumptions and goals of humankind. Do we really believe that medical science could and should eliminate all disease? There are numerous, well-funded medical scientists working very hard on research into the idea that ageing itself is a process that can be prevented. Because that is a notion very attractive to wealthy westerners, more money is being spent on preventing ageing than on fighting malaria and other tropical diseases. Where does this end? Do we really want a world â or at least a wealthy word â where everybody gets to be a centenarian? What are the effects of that on overall population, on demographics, economics and the allocation of finite resources including food and housing?

The mass hysteria around the current coronavirus is being driven by a societal rejection of the notion that the human species is part of the wider ecology, and that death and disease are unavoidable facts, with which it ought to be part of the human condition to come to terms. Let me offer a comforting thought to those of you who have bought into the hysteria. I have no doubt whatsoever that mortality rates from the coronavirus are being exaggerated. They are all based on extrapolation from those who have been tested, but there exists a very large population of people, worldwide, who have or have had the coronavirus, whose symptoms have been those of a cold or non-existent, who have not put themselves forward for testing. The Hong Kong flu had a mortality rate of 0.5% and I believe that ultimately COVID-19 will prove to be very similar. Just like flu once you get it, the only difference being it is more contagious so more people will get it.

Yes wash your hands, bin your tissues, keep things clean. Donât hang around someone who has the flu. Take advantage of everything modern medicine can do to help you. But donât be too shocked at the idea that some sick people die, especially if they are old. We are not Gods, we are mortal. We need to reconnect to that idea.

All human deaths are individual tragedies. I wish all solace and comfort to the grieving, and in no way wish to minimise the pain of individual loss of anybody of any age (I lost my own mother not long ago), or that even a small number of child deaths in particular will be dreadfully painful. My deepest and heartfelt condolences go to all the bereaved, and my warm regards go to all the sick and the worried. But the perspective of the wider place of human life in the cosmos is a help in grieving. The purpose of this blog remains not to shirk from saying what might be unpopular. I do hope people will start to consider COVID-19 in a more measured way. Is the Global Pandemic a Product of the Eliteâs Malthusian Agenda and U.S. Biowarfare?
Max Parry
• 165 Comments • Reply
← Your Man in the Public Gallery â Assa...
Hide 15 CommentsLeave a Comment
"Momento Mori â Unpopular Thoughts on Corona Virus"
• 15 Comments
Commenters to Ignore
Commenters to ignore (one per line)

← Your Man in the Public Gallery â Assa...
Current Commenter
says:
Current Date at Time Now
Leave a Reply - Comments on articles more than two weeks old will be judged much more strictly on quality and tone
Cancel Reply