According Melinda Gates the wife of the (white, male) Microsoft pioneer Bill Gatesâonly women and minorities can give us innovation. [Why Melinda Gates Has Been Funding Female VCs Through Her Secretive Investment Firm, by Polina Marinova, May 30, 2018.]Perhaps Mrs Gates should talk to the psychologists who actually research these things. Because their finding is that it is overwhelmingly high IQâand therefore whiteâcountries that are responsible for per capita innovation. And it is specifically those high IQ, white countries whose populations have the highest levels of the male hormone testosterone.

We tend to assume that a countryâs scientific achievement is essentially a reflection of its average IQ. Controlling for population size, smart countries produce the most science Nobel Laureates, the most important s cientific breakthroughsâ¦so itâs the countries with the biggest brains that are the engines of civilization.

However, a recently published study, led by Dutch psychologist Prof. Dimitri Van der Linden(right) has concluded itâs not so simple. Of course national IQ is importantâbut so are national average levels of testosterone.

The study, recently published in the Journal of Creative Behavior, sums up its findings very clearly in its title: Nationalâlevel Indicators of Androgens are Related to the Global Distribution of Scientific Productivity and Science Nobel Prizes, [By Dimitri Van der Linden et al May 23, 2018]. In laymanâs terms, itâs not just a nationâs brains that predicts its scientific achievements, itâsâ¦wellâ¦itâs balls!

Van der Linden and his team are fascinated by the way that countries where average IQ is considerably higher than the European averageâsuch as Japan, South Korea and Finlandâscore so poorly in terms of per capita science Nobel prizes and other measures of per capita scientific achievement, such as highly cited publications.

On these measures, certain wealthy high IQ societies are on a par with or even beneath Greece and Portugal, whose average IQ, due to Black and Moorish admixture, is closer to 90 than the European average of 100âlet alone the Japanese average of 105. How can this bizarre anomaly be explained?

The researchers argue that there is a key difference between being a scientist and being the kind of âgeniusâ scientist who makes the earth-shattering discovery that is considered worthy of a science Nobel prize.

Scientists in general, they argue, are characterized by high intelligence and an agreeable and rule-following nature. This is vital because they have to be meticulous, cooperate in large research groups, and avoid even minor mistakes.

However, studies of acknowledged geniuses and of many science Nobel prize winners indicates that theyâre not like this at all. They combine outlier high intelligenceâfar higher than the IQ score of about 130 associated with a science PhDâand moderately low agreeableness, rule-following and impulse control. They are uncooperative, driven, impulsive and neither understand the feelings of others nor particularly care about them if they do understand them. They are, in other words, high functioning autistics.

This, argue the team, is crucial to genius. The genius is clever enough and sufficiently able to âthink outside the boxâ to come up with his original idea. He has the drive and ambition to win the race to the breakthroughâjust as Darwin went to print in 1859 because he believed someone else was getting close to having âhisâ idea.

And original ideas almost always offend vested interests and upset people. But the genius either doesnât realise this or he just doesnât care.

These kinds of characteristics, argue the researchers, are predicted by high testosterone. It follows, they argue, that when comparing countries of relatively similar average IQ, then it will be the higher testosterone countries that will display higher levels of per capita scientific achievement. And this is the hypothesis which the study tests.

The authors gathered a variety of proxies for national level of testosterone. These were:

Van der Linden and his team first showed that all of these supposed testosterone markers inter-correlatedâat 0.67, a strong correlation. This proved that they really were measuring the same thing: national testosterone level.

They then limited their sample to countries with an IQ of at least 90, which encompassed 98% of countries that had won science Nobels. This allowed them, to a significant extent, to control for national IQ.

With this done, they found that their measures were all associated in the expected directionâscientific Nobel prize achievementâwith effect sizes ranging from 0.1 to 0.49, the best predictor being fingersâthe male 2D4D ratio described aboveâwhich is strongly a matter of genetics.

And when controlling for confounding factors such as GDP, pathogen level, extent of democracy, and temperatureâmeaning a massively reduced sampleâthe associations with androgens remained in the expected direction and with regard to scientific publicationsâwhere the sample size was much larger than for the relatively small number of science Nobel prizes that have been handed outâthe associations remained statistically significant; i.e. 95% or more certain not to be a fluke.

The authors highlighted various national outliers, which were mainly caused by the countryâs science Nobel laureates not being natives of the country in question but instead being, for example, a person of English ancestry in Brazil; or simply an Ashkenazi Jew in a European country.

So, those of us who want to preserve civilization clearly cannot afford to simply focus on national IQ. Very high national IQ is important but when combined with very low testosterone levels it gets you Japan or Finland: efficient, trusting, well-run, but no original ideas and very little contribution to civilization.

For civilization to really take off you need an optimal level of highly intelligent, high testosterone people. 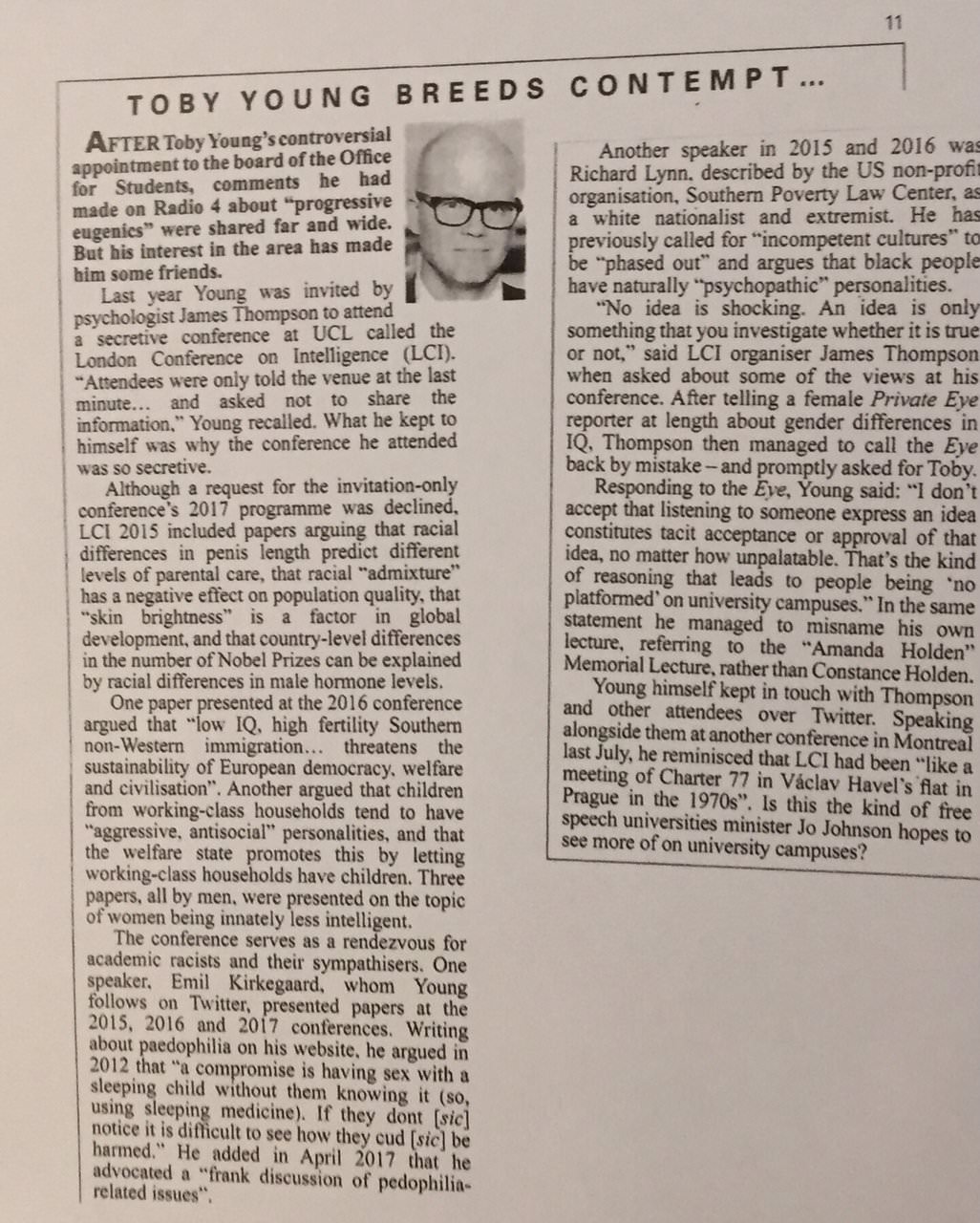 Perhaps population difference in behaviour-altering hormones will be the new taboo, as this study was originally presented at the London Conference on Intelligence which explored non-PC science and took place annually at UCL until 2017 without the authorities realizing its subject matter (See my Then they came for the London Conference on IntelligenceâAnd Free Speech, And Science, January 30, 2018,]. It was specifically highlighted in an expose on the conference as one of the more outrageous and ideologically unacceptable papers [Toby Young Breeds Contempt, Private Eye, January 10, 2018.} (Not online, click to enlarge, or try this PDF)

But the paperâs conclusions have made it past the scientific gatekeepers and been published in an academic journal. It implies that Europe, and European descended countries, are the fabled âGoldilocks Zoneâ for civilization of high IQ plus high testosterone.

In other words, Melinda Gates has it exactly backwards âitâs clever, masculine white people give us the most innovation.

And, of course, give her the money to impose her ridiculous ideas.

(Republished from VDare by permission of author or representative)
← Are Atheists Genetic Mutants-A Product ...NO, William the Conqueror Did NOT Have ... → Itâs Official: Higher Jewish Intelligence Is Genetic
Lance Welton
• 466 Comments • Reply
← Are Atheists Genetic Mutants-A Product ...NO, William the Conqueror Did NOT Have ... →
Hide 13 CommentsLeave a Comment
"Melinda Gates Wrong, of CourseâWhite Males Key to Innovation. (Has She MET Bill?)"
• 13 Comments
Commenters to Ignore
Commenters to ignore (one per line)

← Are Atheists Genetic Mutants-A Product ...NO, William the Conqueror Did NOT Have ... →
Current Commenter
says:
Current Date at Time Now
Leave a Reply - Comments on articles more than two weeks old will be judged much more strictly on quality and tone
Cancel Reply