Sex Differences in Intelligence: The Development Theory , the latest book by the Grand Old Man of psychology Richard Lynn, systematically demonstrates something that has long been obvious to most people (including women, if you know any): On average, men are more intelligent than womenâby about 4 IQ points. 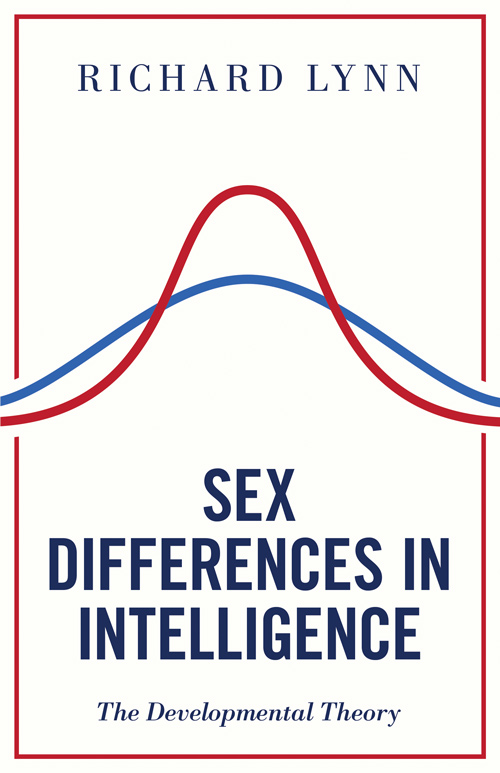 (Full disclosure: I have known Lynn since 2012, consider myself his protÃ©gÃ© and in 2015 we co-authored Race and Sport: Evolution and Racial Differences in Sporting Ability .

In a dry and dispassionate scientific style, as ever with Lynnâs books, the 91-year-old psychologist takes us on an extremely in-depth tour of all of the available data on sex differences in intelligence, carefully explaining the findings in evolutionary terms. In essence, prior to the development of IQ tests, it was assumed that males must be more intelligent than females because males have larger brains in comparison to their size; and also have accomplished so much more. Lynn cites Charles Darwin himself in this regard: Darwin actually remarked in The Descent of Man that

The chief distinction in the intellectual powers of the two sexes is shown by man attaining to a higher eminence, in whatever he takes up, than woman can attainâwhether requiring deep thought, or imagination, or merely the use of the senses and hands

How much longer before he is Cancelled?

The problem, as Lynn explores, is that, as IQ testing developed across the twentieth century, generally using samples of school children, there were no clear differences in IQ between males and females. They appeared to have the same average IQ.

This was widely accepted until, in the 1990s, Lynn began to propound the âDevelopmental Theoryââhence the subtitle of his new book. Lynn explored not merely IQ samples from schoolchildren, but also those from adults. In doing so, Lynn discovered something fascinating: Males and females do indeed have approximately equal IQ until about the age of about sixteen. However, by early adulthood, males have a higher IQ. This is because males undergo puberty later and puberty involves a period of intense brain growth, which ultimately results in males having bigger brainsâand thus higher average IQs.

Lynn presents an evolutionary theory for this difference: In order to acquire females, who sexually select for status, males had to reach the top of their groupâs hierarchy and attain more resources than other males, through the cognitively-challenging means of solving novel problems and creating successful alliances with other males. This would have strongly selected for intelligence.

Interestingly, Lynn notes that the magnitude of sex difference in intelligence is smaller among those races that, on average, have lower IQs, such as Sub-Saharan Africans. Lynn hypothesizes that this is because their environmentâs easier ecology meant that the problems to be solved were less taxing, so that that intelligence was less intensely selected for.

I would add that, in such ecologies, social status would be more a matter of physical toughness than high intelligence. And, further, the tendency to abandon females in such âLive Fast, Die Youngâ environments would result in females having to be relatively more masculinized in order to survive and thus in females being relatively more intelligent.

Having demonstrated this, Lynn supports his theory with a variety of different kinds of IQ tests, before exploring sex differences in robust correlates of intelligence, presenting evolutionary reasons for why they have developed.

Thus, he shows that males have faster reaction times than females and that males score higher on âGeneral Intelligence,â the strongly genetic construct which underpins different kinds of intelligence, such as spatial, verbal and mathematical reasoning.

Adult males also score higher than females in certain weak correlates of intelligence, such as general knowledge. As Lynn notes:

However, on some measures of intelligenceâthose that more weakly correlate with General Intelligenceâevolution has given females an advantage. Thus they are more verbally fluent. Lynn says: âThe likely evolutionary explanation for this is that females who produce a lot of words promote the acquisition of language in their children.â They are also considerably better than men at learning foreign languages. Lynn says: âThe likely evolutionary explanation for the female advantage in second language ability is that normally in the great apes, including evolving hominids, females were exogamousâ a.k.a. females were more likely to be married off to neighboring tribes.

(It is also true that females appear to have been more likely to be captured and kept alive by other tribes, and to have survived their menfolk being wiped out during an invasion. A recent study presented a huge body of evidence that the Y (= male) chromosome of an ethnic group tends to be that of the most recent invader (Spaniards in the case of Hispanics) while the X (=female) chromosome is aboriginal, from the lower status group. This has been termed âDuttonâs Ruleâ [Exchanging Fluids, by T De Baca et al., Politics and the Life Sciences, 2020]. Second language-acquisition would improve female survival chances in these circumstances).

Females have better visual memory, probably an adaptation to foraging, and are better at spelling because they can better visualize the shapes of words.

Females also have better fine motor skills. Lynn comments: âThere is no apparent evolutionary explanation for this female advantage.â However, I would have assumed that this was also an adaptation to foraging.

Conversely, males also have greater throwing accuracy, presumably due to its use in hunting.

Lynnâs theory has been criticized, notably by the late James Flynn, who is credited with having discovered the Flynn Effect (although some call it the Lynn-Flynn Effect because Lynn earlier recorded the same phenomenon). Flynn presented a meta-analysis of IQ data from university students indicating that males and females had equal IQ. However, Lynn noted that in all large and representative population samplesâexcept Argentina, for some unknown reasonâadult males in fact score higher than adult females [Sex Differences in Intelligence: Reply to Comments, by Richard Lynn, Mankind Quarterly, 2017]. (University students may be a problematic sample anyway, because in some cultures the admissions process effectively discriminates in favor of female personality characteristics, such as Conscientiousness).

VDARE.com has noted this as early as 2005, when Lynn published an article on it in The British Journal Of Psychology, which received a favorable notice here on VDARE.comâThe Silly Sex? by Ilana Mercer, January 6, 2005, and of course negative notices in the MSM: Is this a clever thing to say about women’s IQ? by Tony Halpin, Timesonline.co.uk, August 25, 2005.

Sex Differences in Intelligence: The Development Theory is an extremely useful and interesting book. I was surprised, however, that it only passed the briefest comment on the fact that the male IQ range is wider than the female IQ rangeâin other words, the male Bell Curve has longer tails than the female male Bell Curveâleading to more male geniuses but also more male criminals and vagrants. I would have expected this important difference, and the related male variability hypothesis, to merit a chapter. (F. Roger Devlin made the same point in his otherwise favorable American Renaissance review).

Males are more variable because they are under higher levels of sexual selection. Humans are a polygynous species in which the females, historically, gathered around the most dominant male, as he seemingly had the best genes. Traits that are sexually selected tend to have high variability because a high mutation rate increases the probability of a beneficial mutation. The carrier of this mutation will come to dominate the gene pool. So males are operating a very risky strategyâbut this makes sense because, as Lynn noted in his book Dysgenics, among hunter-gatherers only about 40% of males father any children.

Besides the male variability issue, my second criticism is stylistic. Lynn tends to write his science in a very dry, scientific style. But he can write extremely engagingly, with a novelistâs ability to bring his observations to life, as he did in his autobiography Memoirs of a Dissident Psychologist, published last year.

I would like to see his next scientific book mix the two styles, thus rendering it more appealing to a non-academic readership.

Recently, Lynnâs research on racial and sexual differences saw him stripped of his (purely honorific) emeritus professorship at the University of Ulster. The Woke Mob has to do this because they canât logically fault his arguments. ← On Edward O. WilsonWhy Were So Many Geniuses Born Prematur... →
Current Commenter
says:
Current Date at Time Now
Leave a Reply - Comments on articles more than two weeks old will be judged much more strictly on quality and tone
Cancel Reply
Commenting Disabled While in Translation Mode