On the 73rd anniversary of D-Day, it appears only a cynic could say France and the United Kingdom âwonâ World War II. As this is written, news comes of a self-described âsoldier of the caliphateâ attacking police in Paris, trapping thousands inside the Notre Dame Cathedral [This is for Syria,â Man attacks police outside Parisâ Notre Dame Cathedral, 2000 trapped, by Alix Culbertson, Express, June 6, 2017]. This comes only days after the London Bridge terrorist attack, which itself came only days after the recent attack at an Ariana Grande concert in Manchester. Terrorism is, as the new leader of France so memorably put it not long ago, almost literally part of the âdaily livesâ of Europeans now.

The response of those who rule the West and their Main Stream Media lackeys (it would be obscene to call them âelitesâ) is to deny a problem even exists and to attempt to destroy those who point it out.

There is now a distinct pattern of the Left claiming a scalp after each new terrorist attack. It remains to be seen who will be the victim after Paris, but two Katies were the casualties after the attacks in England; Katie Hopkins, formerly of the UKâs

and Katie McHugh, formerly of Breitbart.

In both cases, the ostensible justification was a tweet made in anger immediately after the terrorist attacks. Katie Hopkins (who retains her column at the Daily Mail) called for a âfinal solutionâ to terrorism after the attack in Manchester. Presumably recognizing the unfortunate parallel of the phrasing, she quickly deleted the tweet, but continued to rage against how Muslim terrorism has become an accepted part of life in Britain. Needless to say, in the plain literal meaning of her statement, there was nothing untoward about what she said.

But in the birthplace of the English-speaking worldâs liberties, this of course led to police reports against Katie Hopkins. She was soon afterward fired from LBC, a decision which we are told led to âcheers and applauseâ from the staff and was greeted by the Leftist press as some kind of a great national triumph [Youâre Fired at last! Katie Hopkins is sacked by LBC after âfinal solutionâ tweet, New Statesman, May 26, 2017].

After the London Bridge attack, Katie McHugh of Breitbart also expressed a healthy sense of outrage and made the obvious point that such attacks would not be taking place if Muslims hadnât, for some mysterious reason, been admitted into the United Kingdom.

The Left seized on her tweet, among other things mocking the young woman for supposedly ignoring the IRA. (Of course, as even the fanatically anti-Trump John Schindler noted, there is no comparison: The sheer number of jihadists in the United Kingdom, the Islamistsâ eagerness to use indiscriminate violence, and the apocalyptic motives of the caliphateâs Western servants make both compromise and containment impossible. Schindler even referenced the great Enoch Powell and warned, â[I]tâs difficult to say Powell was wrong in his essential pointâ [There is no intelligence solution to Britainâs rivers of blood, New York Observer, June 4, 2017]).

Nonetheless, McHugh was fired by Breitbart. This was especially stunning given that at the very moment Cuckbart issued McHughâs pink slip, Donald Trump was engaging in a campaign-style tweetstorm defending his travel ban from certain Muslim countries and Breitbart icon Nigel Farage, hero of Brexit and former leader of UKIP, was broaching the idea of internment camps [Farage says calls for internment camps for terrorist suspects could grow in Britain, RT, June 6, 2017].

That's right, we need a TRAVEL BAN for certain DANGEROUS countries, not some politically correct term that won't help us protect our people!

Breitbartâs shameful conduct was especially concerning given the siteâs publishing history and associations, which in the past included defiance of Political Correctness, frank reporting of racial realities in crime, and championing of European nationalist movements. McHughâs tweet was not only true, it could barely even be considered edgy by Breitbart standards, or even National Review standards. Furthermore, it was a tweet. 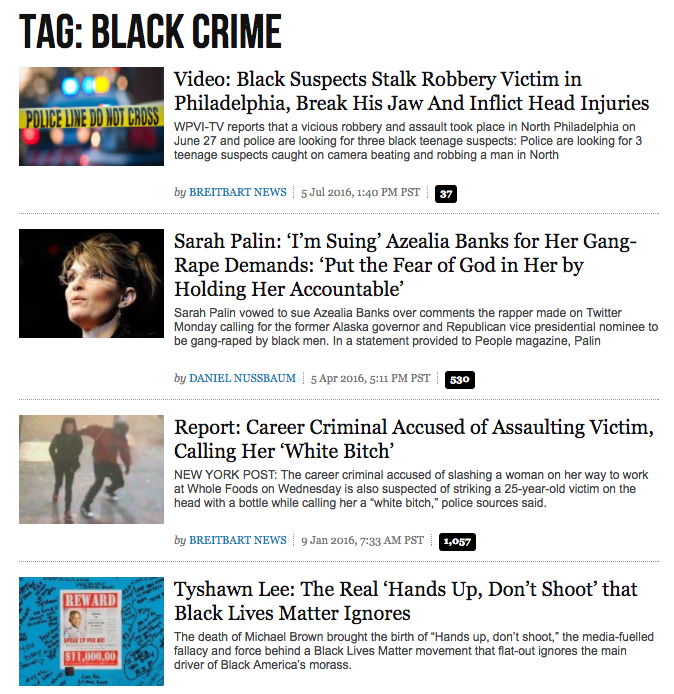 Right-media watcher Will Sommer argues Breitbart is collapsing as it pursues respectability, advertisers, permanent congressional press passes etc. He predicts any employee who gets in the way of that quest can expect to be fired, observing accurately that McHugh would still have her job a year or two ago âwhen Breitbart still had a âblack crimeâ section and employed Milo Yiannopoulosâ . [Between Breitbart and a Hard Place, by Will Sommer, Right Richter, June 6, 2017]

Charles Johnson of GotNews similarly charges Breitbart is losing hits, as well as its brand, because it is dependent on advertisers and donors, not readers.

Breitbart, of course, will be neither. The Left is committed to branding the site irrevocably as a âwhite nationalistâ publication.

And significantly, the Left is assisted in this task by former writers from Beltway Right magazines like Betsy Woodruff of the Daily Beast, formerly of National Review and Red Alert Politics. Similarly, the journalist responsible for leading the point and sputter campaign that cowed Breitbart was Oliver Darcy, once Managing Editor of Glenn Beckâs The Blaze. The conservative Leadership Institute, where Darcy worked before The Blaze, once bragged he wasnât a âtypical liberal journalistâ [The âViral Geniusâ Journalist, by Carmela Martinez and Carol Wehe, October 2, 2014]. But from his new perch at CNN, Darcy waged a sadly typical campaign to drive out McHugh, enabled of course by traitorous Breitbart colleagues eager to leak denunciations of her to the very network President Trump habitually labels âfake newsâ [Breitbart employees infuriated by colleagues âappallingâ comments after London terror attack, CNN, June 4, 2017].

Breitbart donors wondering why their investmentâs value is plummeting should be demanding answers why the leakers werenât the ones fired, not McHugh.

(In passing, it should be noted that activists who migrated from the Left to the Right include such titans as James Burnham and Whittaker Chambers. Can anyone imagine reading Betsy Woodruff or Oliver Darcy after their deaths?)

The urge to control speech after a terrorist attack by cracking down on victims is now typical of the so-called center-right. Theresa Mayâs solution to the problem of Muslim terrorism in the U.K. is to censor the Internet, which of course will take the form of an anarcho-tyranny policy of cracking down on British nationalists while doing nothing to stop jihadists [Theresa Mayâs Call for Internet Censorship Isnât Limited To Fighting Terrorism, by Scott Shackford, Reason, June 5, 2017]. The only way you could use censorship to stop jihadists is if the U.K. took a page from Geert Wilderâs book and banned the Koran.

From Breitbart to May, from CNN to Ariana Grande, the West is living in denial. Hopkins and McHugh have been targeted because they suggest actually doing something to solve the problem, namely, 1) getting Muslims out of Europe and 2) stopping more from coming.

Itâs not that Europeans and European-Americans donât know this would solve the problem. Nor does anyone deny Europe is headed to submission if Muslim immigration continues. But to identify the obvious problem, the obvious solution, and the obvious consequences if the solution is not carried out is to impose a moral burden most Westerners do not want to accept.

Hence, Hopkins, McHugh and others like them become the targets of hatred, and their defenestration a cause for rejoicing, because to even allow them to speak would condemn those who remain imprisoned by their own cowardice.

At a certain point, the refusal to understand becomes a moral failing. The cuck who wonât dump his cheating girlfriend, the heroin addict who tells himself he doesnât have a problem, the obese woman who insists she is healthy while destroying herselfâall can be figures of sympathy, but only to a point. Those who present harsh truths to these unfortunates are often condemned for their trouble, those who offer comforting lies are praised by them. But given sufficient knowledge of both problem and solution, victimhood becomes collaboration.

We have reached this point in the West. Katie Hopkins and Katie McHugh are suffering for the sins of our supposed leaders, both in Conservatism Inc. and in the high councils of state.

To refuse to defend them is to join their tormentors and become complicit in our own destruction.

And to remain silent is acquiesce not just to their condemnation, but the condemnation of our entire civilization. James Kirkpatrick [Email him] is a Beltway veteran and a refugee from Conservatism Inc. October Diary: Diversity Visa Terror, Sacco and Vanzetti, Jared Taylorâs Book, Etc.
John Derbyshire
• 45 Comments • Reply
← Who Will Fight for Trump?Time for a National Conversation About ... →
Hide 68 CommentsLeave a Comment
"Katie Hopkins and Katie McHughâFired by Media for Telling Truth About Islam"
• 68 Comments
Commenters to Ignore
Commenters to ignore (one per line)

← Who Will Fight for Trump?Time for a National Conversation About ... →
Current Commenter
says:
Current Date at Time Now
Leave a Reply - Comments on articles more than two weeks old will be judged much more strictly on quality and tone
Cancel Reply
Commenting Disabled While in Translation Mode