With the hindsight offered by ninety-nine years, it is obvious that the outbreak of the World War I marked not merely the beginning of the most destructive war in history up to that time, but a fundamental civilizational watershed. While the fighting was going on, nearly all participants assumed they had been forced into the struggle by naked aggression from the other side. It took historians years to unravel what had actually happened.

At the beginning of the twentieth century, the German Army was the best in Europe, capable of defeating any individual rival. Yet Germany had no natural borders, and was vulnerable to a joint attack on two fronts: by France and Britain in the West and the Russian Empire in the East. A German defeat was considered virtually inevitable in such a scenario.

The Franco-Russian alliance of 1894, which became the Triple Entente when Britain joined in 1907, realized Germanyâs worst fears.

However, there were important differences between Germanyâs Western and Eastern rivals: France and Britain were modern, compact, efficiently-organized countries capable of rapid mobilization, while sprawling Russia with its thinly spread population and economic backwardness was expected to require up to 110 days for full mobilization. Taking advantage of this asymmetry, the German High Command developed the Schlieffen plan: upon the outbreak of hostilities, close to ninety percent of Germanyâs effective troops would launch a lightning attack in the West; this campaign was to be completed within forty days, while lumbering Russia was still mobilizing. With the Western powers out of the way, massive troop transfers to the Eastern front were expected to arrive in time for Germany to face down Russia. Speedâof mobilization, of offensive operations, and of troop transferâwas critical to the success of this plan.

The assassination of the Austro-Hungarian Arch-Duke by a Serb nationalist in June, 1914, is the perfect example of an event which occasioned events which followed, but did not cause them; the men of Europeâs great powers did not slaughter one another for four years over a political assassination in the Balkans. Rather, the assassination occurred in the context of Russian guarantees to Serbia and German guarantees to Austria, which inevitably brought the Triple Entente into play. A diplomatic game of âchickenâ ensued, in which no side was willing to be the first to back down.

When Austria declared war on Serbia on July 28th, the Russian Tsar, conscious of his Empireâs military backwardness, ordered a partial mobilization. This action was intended merely as a precaution in case of a war that still seemed unlikely. But for the Germans, with their Schlieffen plan requiring utmost speed, the Tsarâs order had the effect of an electric shock. Germany felt it had to mobilize as well. Russia responded two days later by ordering full mobilization. Germany gave Russia an ultimatum; and the Tsar, unwilling to knuckle under, allowed the deadline to pass. Within hours, everyone was involved in a war that none of the parties had originally wanted or intended.

German historians call such a series of events a Betriebsunfall: a quasi-mechanical accident such as might occur in the machinery of a factory. Men were drawn into the gear work and crushed when no one was able to throw the emergency switch in time. It was a tragedy in the fullest sense of the wordâa disaster brought on by well-intentioned but flawed men acting rationally under conditions of imperfect knowledge. The consequences are well-known: ten million dead, twenty-eight million more wounded or missing, Communism established in Russia, the Balfour Declaration setting the stage for todayâs ongoing Middle East conflict, and the whole crowned by a shameful âpeaceâ treaty that all but guaranteed a future war of German revenge.

Yet, as we can see from newsreel footage of August 1st, the popular reaction to the outbreak was war fever on a scale not seen since the crusades. Europe had been enjoying forty-three years of peace and unprecedented material prosperity, and the young greeted the war as a romantic adventure.

The planned rapid German advance through the Low Countries into Northeast France was unexpectedly halted in early Septemberâthe âMiracle of the Marneââfoiling the Schlieffen plan. On the 13th, the German Army responded by attempting a flanking action around the French lines; the French then rapidly extended their own defensive lines in what became known as the ârace to the sea.â Since neither side could dislodge the other, and neither was willing to retreat, soldiers began digging themselves in to their positionsâthe beginning of trench warfare. By the time winter set in, the pattern of the next four years had been clearly established: a war of attrition involving trivial advances and retreats across a few acres of mud.

But as Christmas approached that year, something unexpected began unfolding. On the frontline sector south of Ypres, Belgium, German troops began decorating the area around their trenches for Christmas Eve. As Wikipedia describes it:

The Germans began by placing candles on their trenches and on Christmas trees, then continued the celebration by singing Christmas carols. The British responded by singing carols of their own. The two sides continued by shouting Christmas greetings to each other. Soon thereafter, there were excursions across No Manâs Land, where small gifts were exchanged, such as food, tobacco and alcohol, and souvenirs such as buttons and hats. The artillery in the region fell silent. The truce also allowed a breathing spell where recently killed soldiers could be brought back behind their lines by burial parties. Joint [religious] services were held.

The ceasefire spread to other sectors of the front, with as many as 100,000 men eventually participating. In some areas, soccer games between the belligerents replaced combat. 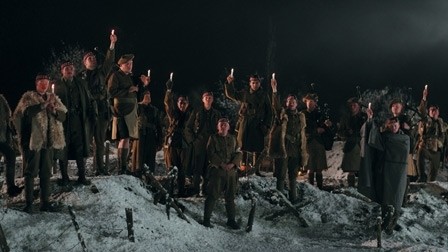 By December 26th, it was over. The authorities got word of the breakdown in discipline and intervened vigorously.

In 2005, an international consortium from France, Germany, the United Kingdom, Belgium, and Romania produced a film about the Christmas Truce: Joyeux NoÑl. The film opens with scenes of children in French, British and German grade schools reciting rhymed curses they had been taught against the opposing side: the British childâs curse calls for the complete extermination of Germans.

The scene switches to Scotland, where an enthusiastic young man, William, rushes into his local Catholic church breathlessly to announce to his younger brother Jonathan that war has been declared; they are to begin basic training in two days. âAt last, somethingâs happening in our lives,â he rejoices. The priest, Fr. Palmer, looks notably less enthusiastic.

At the Berlin Opera, a performance is interrupted by an officer walking on stage to announce that war has been declared. The lead tenor, Sprink, is quickly called up.

In a French trench, Lieutenant Audebert wistfully looks at a photograph of his pregnant wife moments before being called to lead an assault on the German lines. In the ensuing action, Scottish William is mortally wounded; his brother Jonathan is forced to leave him behind, a psychological trauma from which he never recovers. Audebertâs men pour into a German trench, but as they turn a corner, some one-third of them are mown down by a German machine gun.

Meanwhile, Sprinkâs lover, the Danish soprano Anna, receives permission to sing before the Crown Prince of Prussia. Sprink is called back from the front to perform with her, and is impressed with the luxurious comfort in which the German commanders are living. When he returns to the front, Anna insists on accompanying him, determined to sing for the ordinary frontline soldiers as well as the officers at headquarters. (The presence of a woman at the front is poetic license on the filmmakersâ part.)

The German soldiers begin setting up Christmas trees along their trenches, to the bewildered suspicion of the French soldiery. After the singers conclude their first number, a cheer goes up from the Scottish trenches. Fr. Palmer plays the first few bars of another Christmas song on the bagpipes, and Sprink responds by performing the song, climbing out into No Manâs Land. Lieutenant Audebert motions to his men to hold fire. Soon, men are pouring out of the trenches on both sides, sharing food and drinks. Fr. Palmer holds a Christmas Eve Mass for all the men.

On Christmas morning, the officers renew the truce and arrange for exchanging their dead. Dozens of men are buried between the lines. A soccer match ensues. The officers realize the situation is untenable and attempt to restore discipline, but by this time the men are refusing to fire upon each other.

A bundle of soldiersâ letters is intercepted by the French authorities, alerting them to the situation. Fearful of having their war spoiled, they dissolve the division and repost its members to various unaffected sectors of the front. The Germans are transferred to the Eastern front to face the Russians. Fr. Palmer is replaced by a Bishop who preaches a sermon urging new recruits to exterminate German men, women and children.

A major theme of the film is music. Sprinkâs superior officer begins by telling him that, being a singer, he is useless as a soldier. Then it is the incongruous presence of music that leads to the unplanned ceasefire. At the end, as the Crown Prince of Prussia informs his men of their punishment, he catches sight of a harmonica. He snatches it away and crushes it beneath his boot heel.

The Christmas Truce of 1914 did not change the course of the war very much. In future years, commanders were successful in suppressing similar occurrences. As the war progressed and especially after poison gas was introduced, soldiers gradually came to see their enemies as less than human, as was the intention of the higher officers on all sides. But it has continued to spark the popular imagination in the near-century since it took place. A Canadian historian has written:

It [was] the last expression of that 19th-century world of manners and morals, where the opponent was a gentleman. The ones who survived, who lived to see other Christmases in the war, themselves expressed amazement that this had occurred. The emotions had changed to such a degree that the sort of humanity seen in Christmas 1914 seemed inconceivable.

Joyeux NoÑl lost money at the box office, and critics have complained of its âsentimentality.â I suggest seeing it for oneself this Christmas season. The Holocaust of Six Million Jewsâin World War I
Thomas Dalton
• 1,213 Comments • Reply
← Lions and FoxesCharles Murray's FACING REALITY: Ruling... →
Hide 9 CommentsLeave a Comment
"Joyeux NoÑl: the Beginnings of WWI and the Christmas Truce of 1914"
• 9 Comments
Commenters to Ignore
Commenters to ignore (one per line)