In the 2003 movie KILL BILL: Vol. 1, the Bride, played by actress Uma Thurman, wakes up after a four year coma to find that she is being raped by two white men, who are utterly stereotypical white rednecks.

Here they are staring down at her. 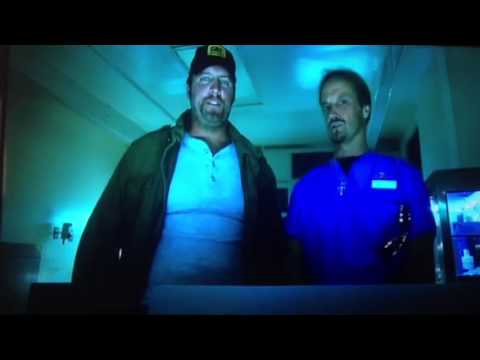 The one on the left is a truck driver wearing a Caterpillar Trucker Cap. (Obviously, if this were made today, it would be a MAGA hat.)

Here’s a close-up of the attendant (“Buck” from Huntsville, Texas) who’s been having sex with Uma Thurman while she’s in a coma, and is now renting her to his truck driver friend. Note the cross around his neck, it didn’t get there by accident.

But are these men typical of the kind of men who would rape a woman while she’s unconscious? Not as far as I can tell.

Nathan Sutherland, below, a licensed practical nurse, was recently charged with having sex with a Native American woman who is in a vegetative state when she gave birth to a child which DNA shows he fathered: 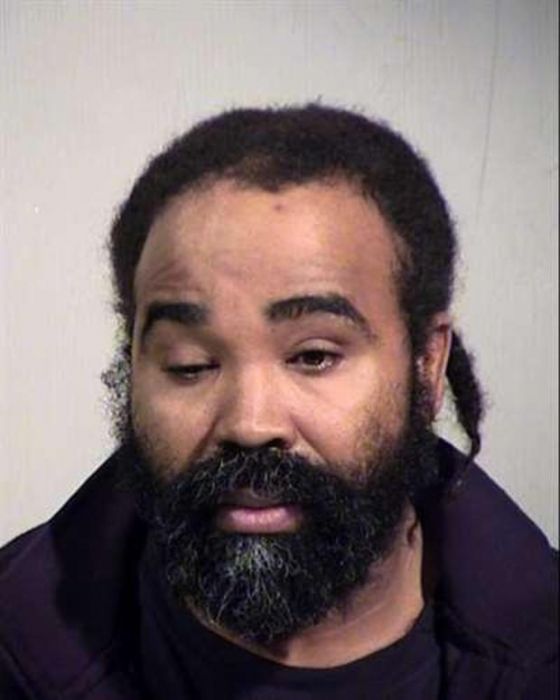 This not the first time this has happened.

In Rochester, New York, in 1996 a young (probably white) woman who was in a coma was found to be pregnant and John Horace, an “aide at the nursing home with a sordid background, was identified through DNA testing, convicted of rape and sent to prison.”

He was released on parole in 2012, but sent back for failing to abide by the terms of his parole, and may be in a “treatment facility designated for sexually violent predators”. His sentence runs until 2021, but he could be there for life. [In a first, a comatose Rochester woman gave birth. Today, her rapist remains behind bars, Steve Orr and Gary Craig, Rochester Democrat and Chronicle, January 11, 2019]

Horace is pictured below: 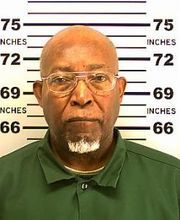 The other case is that of Israel Moret, who impregnated a comatose woman (again, probably white) who then gave birth, prematurely, to brain-damaged child.

SALEM — A former nursing home aide who raped and impregnated a comatose patient was sentenced yesterday to 11 years in prison.

âOur family now has a second broken child because of what he did,â the victimâs sister said in court. âHis selfish actions brought into this world a life with little hope and a bleak future.

âHe has sentenced our family to sorrow for life,â the sister said, sometimes breaking into tears. âOur hearts sink when we hold her, hear the machines that keep her alive, and anticipate her future.â

Members of the rapistâs family and the victimâs family sat within a few feet of each other at the hearing, but appeared worlds apart.

Moretâs lawyer, Lawrence McGuire, said his client wanted to apologize through him to the victimâs family, who looked on as Judge Isaac Borenstein pronounced the sentence.

McGuire also said Moret asks him when they meet, âHow is my daughter?â

âHe has also told me to tell this court and all who will listen that he expects to do what he can for this child,â if he gets an opportunity, McGuire said. [More]

Moret was sentenced to 11 years, but that was in 2000, and he’s out again. He’s now a Registered Sex Offender living in Lawrence, MA. He’s black, too.

The screenshot below is from Jet Magazine, February 8, 1999. While Jet insists on referring to him as a Massachusetts Man, you would know that he was black even if there wasn’t a photo, because all stories in Jet are about black people. However, there’s one more notable thing about himâhe’s accompanied in court by an interpreter. 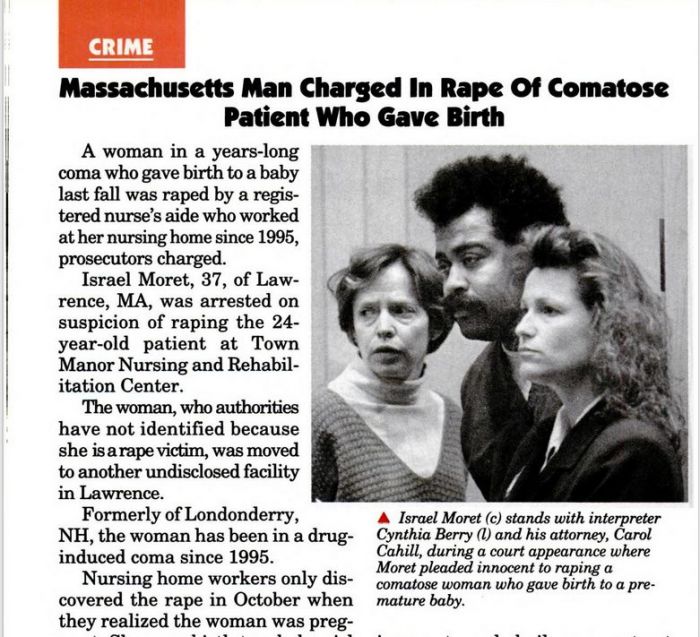 Ann Coulter‘s book Adios America famously includes a “Secret Decoder Ring” for figuring out which of the crimes in your newspaper is an immigrant crime.

Itâs great living in America and having to interpret news stories as if weâre reading Pravda. Usually, the only way to tell if a crime story involves an immigrant is if:

But those telltale signs allow only an educated guess that the perpetrator is an immigrant. To confirm it, one must search for words such as âICEâ or âtranslator.â In a way, weâre lucky immigrants donât bother learning English, or the âtranslatorâ search wouldnât work.

Moret scores four out of five before we get the part about the interpreter. So Moret, while black, is not a black American, but an immigrant from somewhere like Cape Verde. But no crime of this kind, as far as I know, has ever been traced to a white guy in baseball cap.

Jams Fulford [Email him] is a writer and editor for VDARE.com.

← VDARE.Com's War On Christmas Archive: 3...Why No Stories About Whites Fearing â... →
Current Commenter
says:
Current Date at Time Now
Leave a Reply - Comments on articles more than two weeks old will be judged much more strictly on quality and tone
Cancel Reply
Commenting Disabled While in Translation Mode