More shots have been fired in the trial run of the second American Civil War.

On August 25th, Kyle Rittenhouse, a seventeen-year-old citizen-militia member, was attacked at least twice by a Black Lives Matter and Antifa mob during a riot in Kenosha, Wisconsin. He was armed with a rifle, and with it killed two of his attackers and injured a third. This third attacker was about to fire a pistol at him when Rittenhouse nearly blew off his arm. That Rittenhouse is entirely blameless and fired his weapon in self-defense should come as no surprise to anyone whoâs been following this story from its beginnings. Also not surprising is how all three victims had criminal records (one being a sex offender, one a domestic abuser, and one for illegally possessing firearms). Predictably, the boy has been arrested and charged with first-degree murder after surrendering to the police. Since that point, Rittenhouse has become a lightning rod for the Left-Right enmity that is rapidly devouring the United States.

The boyâs age, name, family, and privacy rights mean nothing now. Heâs part of history, the poor kid, and neither side will likely ever even try to come to an agreement about him. To half the country, he is a terrorist, a white supremacist, and a symbol of everything thatâs wrong and racist about President Trump. To the other half â my half â Kyle Rittenhouse is a hero, a defender of the West against Marxist degeneracy and a champion of gun rights. With the way things are going these days, it is impossible to remain neutral about him. His lethal defense against the rampaging mob highlights the stark and irreconcilable differences between the Left and Right, and makes us question why both sides are even bothering to live in the same country anymore. Rittenhouse may well have achieved John Brown status. When the Civil War 2.0 starts in earnest, Iâm sure both sides will be singing songs about him between battles, but they will be singing very different things about this unfortunate boy.

Iâll assume most of the details will be well-known by the time of this writing. The New York Times gives a fairly evenhanded assessment of the goings-on, allowing the reader to come to his own conclusions. Leon Wolf of the Blaze practically laughs the charge of murder off the page. And the Nationalist Review shows how people on social media are doxing Rittenhouse and threatening his family.

In some sense, this is part of an easy-to-recognize pattern which may have started with George Zimmerman in 2012 but has suffered a tragic uptick in 2020. A person on the side of Law and Order (usually a white) suffers an unprovoked attack by an opponent of Law and Order (usually a black) and responds with deadly force or the threat of deadly force. Thereafter America engages in a debate/screaming match over the event to see who will grow hoarse first. This year, we have seen the McMichaels, the McCloskeys, the Wuestenbergs, Derek Chauvin, Garrett Rolfe, and now Kyle Rittenhouse. Similar events that donât easily fit this pattern, such as the tragic killings of David Dorn and Dillon Taylor, are quickly memory-holed. This is because Americans these days really want to scream at each other, and relish any excuse to do so.

But in another, more important, sense, the Rittenhouse affair is much, much different. For one, it was part of a larger conflict and, more than any of the events mentioned above, resembled war. Rittenhouse was caught behind enemy lines and was frantically trying to make it to safety. It took all of his self-possession and firearms training to be able to survive. Panic never overcame him. According to the New York Times, Rittenhouse fired eight times from various angles and scored three hits, two of which were kill shots. That is remarkable. Whatâs even more remarkable was that he shot the Antifa goon who was approaching him with a pistol in the arm which held the pistol. Was it pure luck? Or did Rittenhouse wish to disarm his attacker without killing him, gunslinger style? Maybe we will know one day soon. But in the meantime, we should know that Kyle Rittenhouse demonstrated the effectiveness of responsible firearms training and the critical importance of staying cool under pressure. To everyone on the Right, the kid is nothing less than an inspiration.

Secondly, this event illustrates the terrifying determination of the organized Left. Yes, the rioting crowd was rife with chattering Negroes, as they always are these days. One black commentator notes that there are so many white boys around. âThatâs Antifa, man,â he says. When Rittenhouse is fleeing down the street, heâs overtaken and attacked by the whites. They knew he was armed. They knew he had just killed. No less than four of them attacked him anyway â three of whom appeared to be armed with guns. One tried to jump on Rittenhouse, one tried to disarm him, and one bashed him over the head with a skateboard. The thug with the pistol, one Gaige Grosskreutz, appeared last and was shot last. Now, just step back and imagine the kind of mindset one would need to lunge at an armed man. These Antifa people were not exactly inhibited by fear, were they? Instead, their hackles were up and they were motivated by the rage of war. And one gave his life for his cause.

These people are fierce and determined and organized. If the Rittenhouse affair teaches us anything, itâs that we cannot take them lightly.

Third, this event reveals how the Right has the moral high ground. Sure, we can question Rittenhouseâs parentsâ motives for allowing their seventeen-year-old to participate in quelling a riot. But Rittenhouseâs motives do seem to be pure. Before the shooting, he told the Daily Caller:

So people are getting injured, and our job is to protect this business, and a part of my job is to also help people. If thereâs somebody hurt, Iâm running into harmâs way. Thatâs why I have my rifle because I need to protect myself, obviously. But I also have my med kit.

The New York Times also reported that Rittenhouse had been pepper-sprayed by the rioters, and despite this, had offered medical assistance to them.

Compare this Eagle Scout to the thugs and hooligans of BLM and Antifa who were there only to loot and burn because a few days earlier police had shot a recalcitrant Jacob Blake, a black felon who was resisting arrest and reaching for a knife in his car. In this clip, notice the hostility and aggression of the rioters against the militia, who clearly did not want to start a firefight. Notice how one of the rioters kept taunting them, repeatedly saying, âShoot me, nigga. Shoot me, nigga.â This unhinged lout was Joseph Rosenbaum, the sex offender who later chased and threw something at Rittenhouse. This was the first person Rittenhouse killed. Afterwards, Rittenhouse remained on the scene, on his phone, presumably calling 911, until people recognized him as the shooter and started calling for his head.

Could the moral difference between Left and Right be made any clearer than this?

Finally, Kyle Rittenhouse has unintentionally done is force whites to be closer together like never before. Whites should pay attention to the following tweet by black Massachusetts representative Aryanna Pressley: 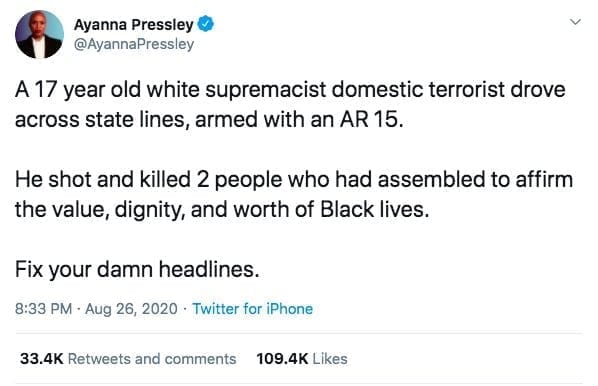 This is a proclamation from a woman who would put all conservative whites in gulags if she could. Iâve always despised black politics because black politicians almost always use the sham of anti-black racism to manipulate whites for their own selfish and corrupt interests. But this Pressley tweet represents more than this. Sheâs motivated more by ideology than greed. Sheâs trying to do with her lying words what Grosskreutz attempted to do with his handgun: destroy the life of a white man.

In todayâs society, nothing can ruin a person more than calling him a white supremacist. She has absolutely no evidence behind her accusations and made them anyway. She has no basis for defending the rioters, and did so anyway. With this tweet, sheâs promoting a black supremacy thatâs as bald as her ugly head.

It requires a person of absolutely no moral bearing to see Kyle Rittenhouse as the villain in this affair. He was protecting property and businesses against the feral mob. He was protecting himself against the feral mob. And if one white person â one that is still a boy, no less â can so effectively fight and kill as a citizen soldier, imagine how effective thousands of whites would be in the same situation.

Perhaps this is what enrages the Left the most about Kyle Rittenhouse.