See also: Yes, Virginia (Dare), There Is A War On ChristmasâHereâs Twenty Years Of Proof!

VDARE.com Editor Peter Brimelow writes: Iâve fallen behind in my War On Christmas roundups, because itâs our fundraising season (all U.S. charities get the great bulk of their donations between Thanksgiving and New Year, very nerve-wracking), because I now have small children, and because Political Correctness has now attacked so damn much else (exactly as we predicted) that we canât keep up. Wikipedia still credits me with sparking Resistance to the War On Christmas (for nowâits entry on me recently deleted my mildly dramatic personal life, presumably because it was too humanizing). I am mortified to see that last comprehensive roundup of the then-nine phases that this interesting cultural harbinger has been through was here Announcing VDARE.com âs 2016 War Against Christmas Competition! âAnd Reminding President Trump That This War Can Be Stopped By Federal Legislation. 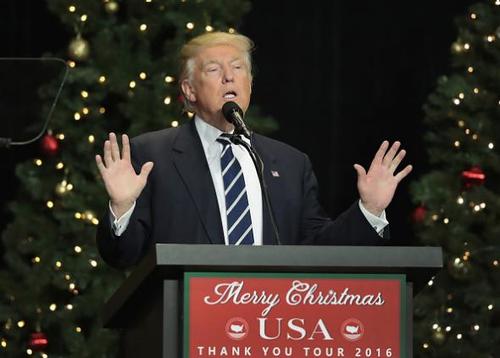 Needless to say, Trump, although obviously aware in some visceral sense of the power of this cultural issue, actually did nothing. Hope to get back to this shortly. Now back to Mr. Anti-Humbug:

I wanted to contribute again this year to VDARE.comâs War Against Christmas coverage, by bringing to your attention the meticulous nature of how corporate advertisers and marketers across the board carefully delineate two separate “December celebrations”, depending on which side of the Pond you are on. 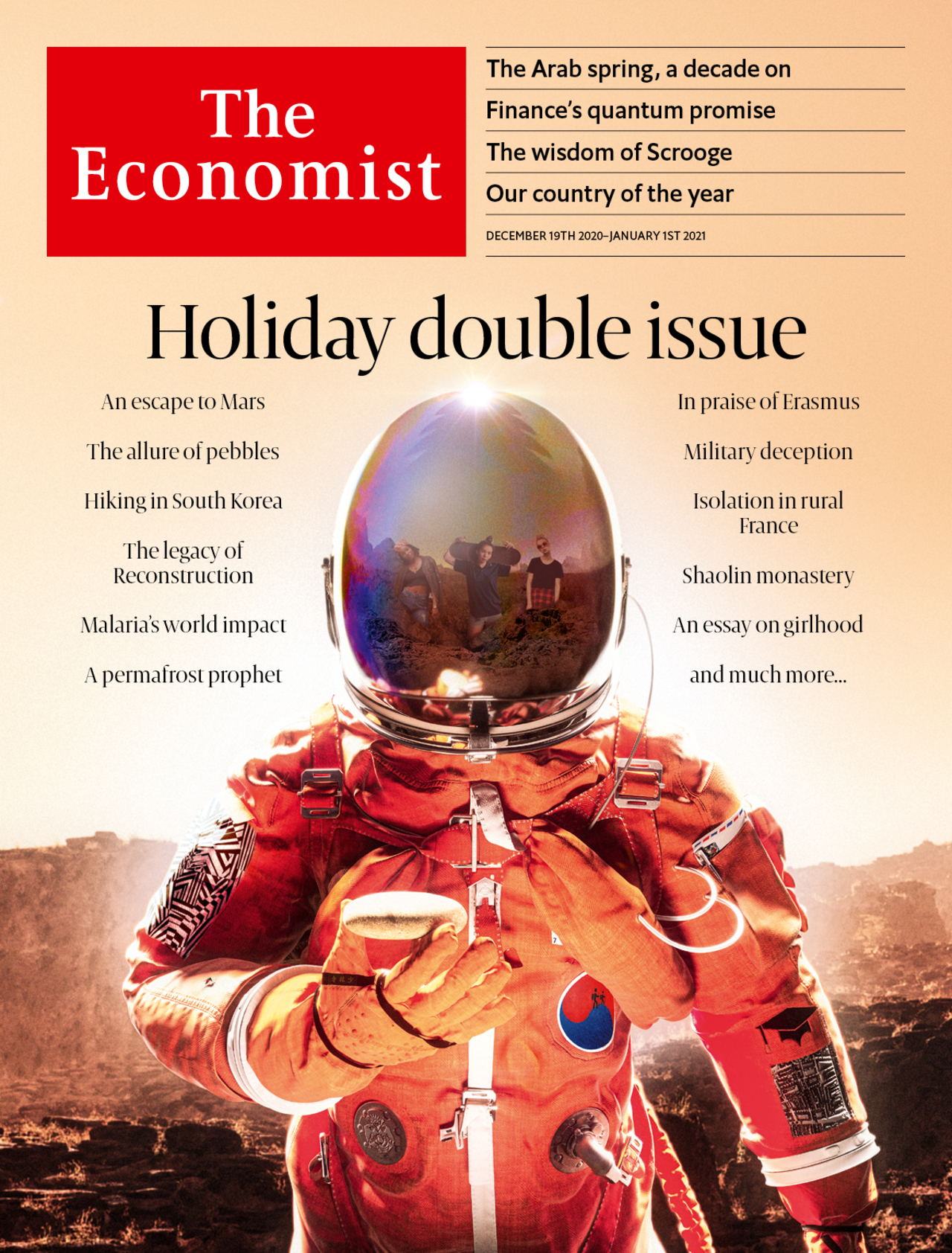 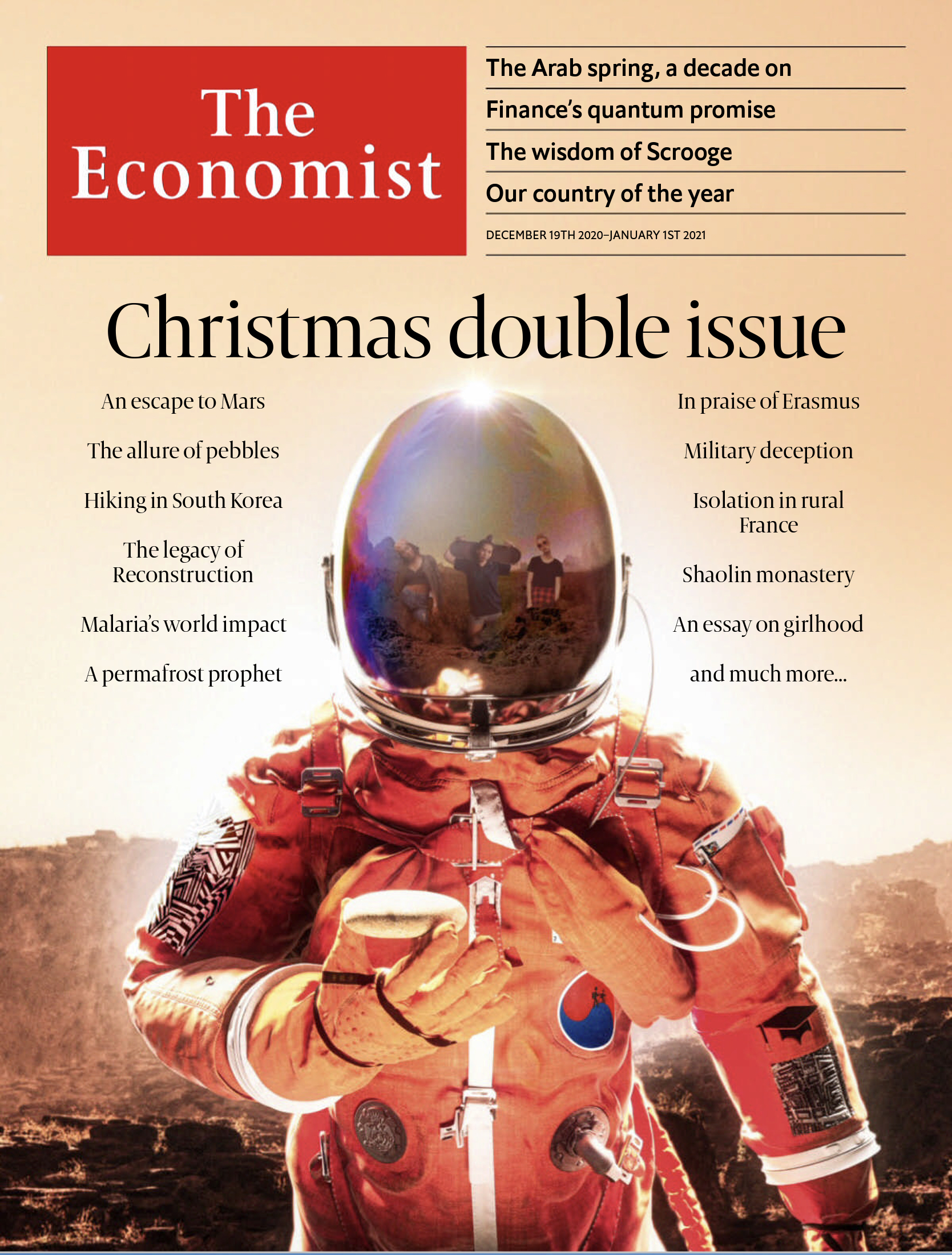 Another one: Once Again, The ECONOMIST Joins The War On Christmas In America, While Denying It Exists 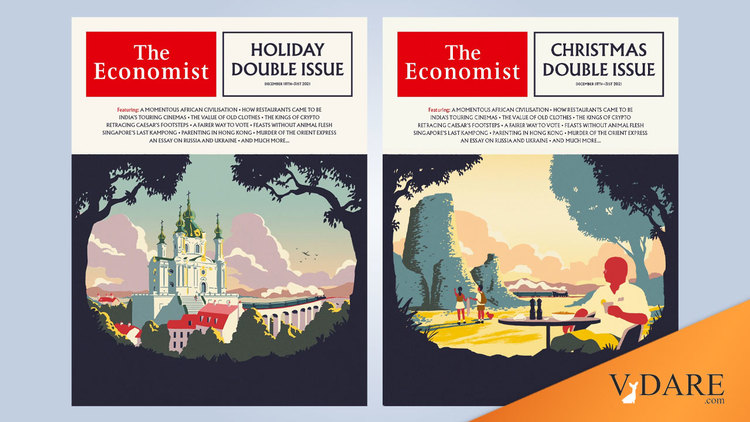 This isn’t an isolated incident unique to one corporation. In fact, it happens virtually across the board within companies that run both US and UK operations simultaneously. It seems there’s some unwritten rule amongst corporate marketers that any time a reference to the “December celebratory period” is mentioned for a US-centered market, the word “Holiday” must be exclusively used, whereas for UK or other markets, the expected and normal word “Christmas” is used.

Here are some examples from this year: 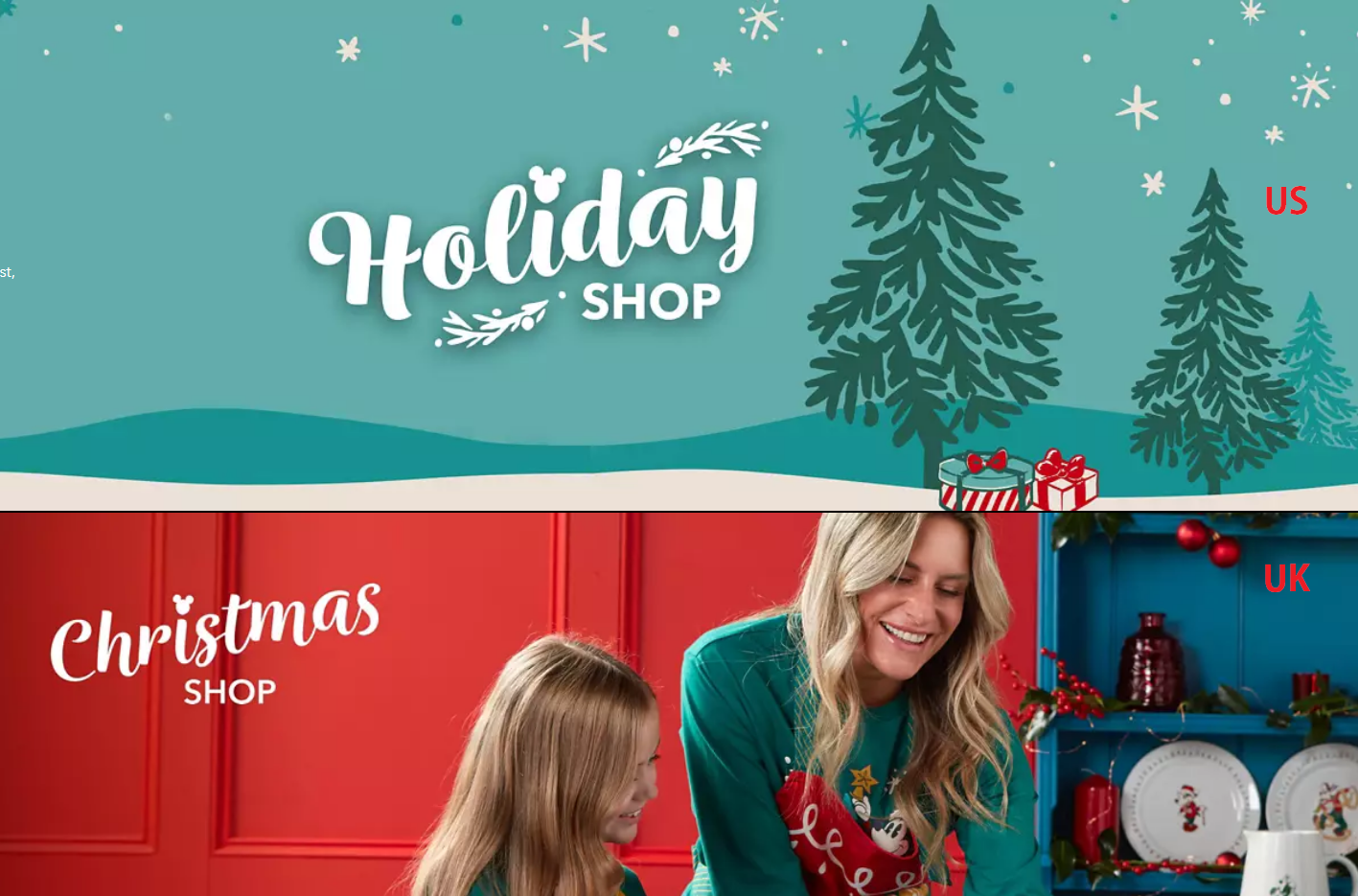 Even when it comes to Santa Claus, who is a character exclusive to Christmas and Christian tradition, American corporations are refusing to use the word “Christmas” in association with him, at least in the US versions of their marketing.

Take for example Google’s annual “Santa Tracker”, where the US version of the site expunges ANY mention of “Christmas”, but the British version uses either “Christmas” or “Festive” instead: 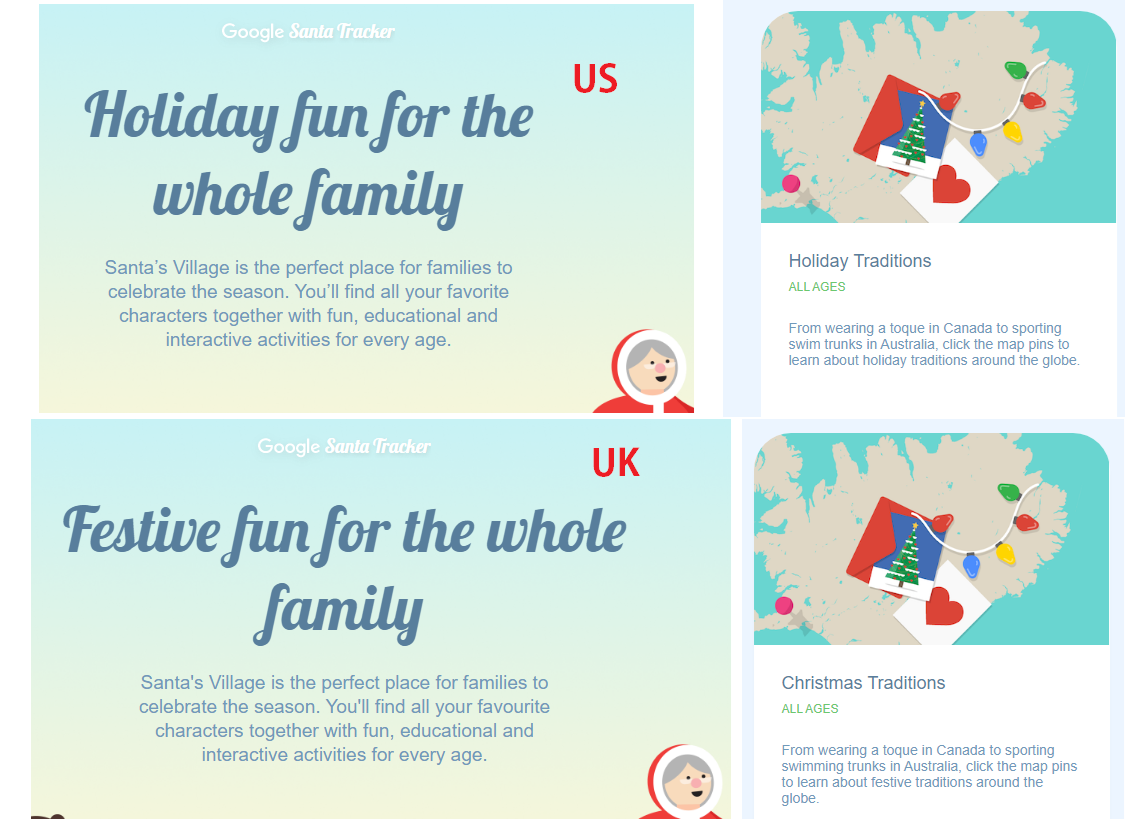 It isn’t even only Google removing the “Christmas” from Santa. NORAD’s decades-long tradition of “tracking Santa” also refuses to use the word Christmas, including on Christmas Day when wishing its followers a happy day on social media:

Faster than starlight, #Santa is done! Thank you for being a part of the 66th year of our holiday tradition. #HappyHolidays from #NORADTracksSanta! pic.twitter.com/aMEqyG0cPX

Unfortunately, since NORAD doesn’t have a “British equivalent”, we can’t know whether they’d have restored the use of Christmas when referring to the Christmas tradition of Santa, on Christmas, for the UK! What a joke!

Contrast the lack of “Christmas” in American advertising to other things that favor Leftists. Every year in America, we are barraged with a seemingly endless parade of “Gay Pride” marketing, advertisements, and other intrusions…yet strangely, unlike with Christmas, American companies seem to have no concern whatsoever that people who are not “part of the LGBT+/Alphabet community,” and may even regard it as perverted and sinful, will feel excluded by such marketing. We don’t see the word “Gay Pride” replaced with “Sexual Preference of Choice Pride”, or the word “LGBT” replaced with “LGBT and Straight People” to be inclusive.

This is similar to the Black Lives Matter movement, where being “inclusive” by saying that not only Black, but ALL Lives Matter is seen as a racist insult, despite being in exact opposition to the so-called logic marketers use at Christmas.

The fact that the word “Holiday” can so easily be replaced with “Christmas” in the UK advertising, without changing so much as anything else, proves that the advertising and marketing is about Christmas, but they just refuse to use the wordâthat dirty word, which contains the name that goes against everything they are pushing for in this fallen worldâ”Christ”.

This Christophobia is striking, as both the U.S. and the U.K. overwhelmingly celebrate Christmas, it is by far the most popular holiday in both countries, and America has contributed innumerable Christmas traditions to the canon over the last few hundred years. Both are Western countries with a Christian and European character and heritage.

For whatever reason, America seems to be the fount of this a Cultural War Against Christmas, down to the very mention of it in an exclusive manner.

Mr. Anti-Humbug [Email him] has been a contributor to our War Against Christmas Coverage for years.