Before the 20th century, it was commonly asserted that men are more intelligent than women. Besides the relative lack of high achievement by women historically, this view seemed supported by biology. For example, in 1887, an Oxford professor of medicine reported that the average male brain was five ounces heavier than that of the average female.

Shortly after the first intelligence tests were developed by Binet and Simon in 1905, however, researchers began reporting that the difference in average intelligence between the sexes was zero or very small. Richard Lynn cites no fewer than 40 testimonies to this effect between 1910 and 2021; most date from 2000 and later. They often refer to âoverwhelmingâ evidence or to a âgeneral consensusâ that has been âconvincingly established.â Yet the male brain is on average 12 percent larger than the female brain, in both newborns and adults. Recent studies using in vivo magnetic resonance imaging (MRI) indicate that brain size has a correlation of between .31 and .43 with intelligence. The identical or near-identical IQ averages by sex were therefore a puzzle.

Arthur Jensen hypothesized that men and women might have the same number of neurons, with those of women more densely packed. However, subsequent research has shown that the male advantage in neurons is even greater than in brain weight: 16 percent, or the equivalent of four billion neurons.

The solution to the puzzle is to control for age. Most mental testing is done on school-age children, and Prof. Lynnâs research confirms that sex differences in this group are slight. However, neurological studies show that white matter in the brain continues to grow more in males than in females after mid-adolescence. Beginning at about age 16, boys have a small IQ advantage over girls, and this gradually grows to four points or more as adults. There are intelligence tests designed for use with very young children, and these show a distinct female advantage. This is especially clear in verbal ability. Girls on average have a larger vocabulary than boys, and the difference peaks between ages two and three, when girls have an average vocabulary 50 percent greater than that of boys.

The common factor in these results is that girls develop more rapidly than boys, but stop developing sooner. Between the ages of about five and 15, the effects of more rapid brain development are gradually cancelled out by the male advantage in brain size, so measured differences in intelligence disappear. In mid-adolescence, the female brain has become fully mature while the male brain continues to develop for several more years.

Prof. Lynn first sketched out this âdevelopmental theory of sex differences,â as he calls it, in a series of papers in the 1990s, and his results have been supported by the research of Helmuth Nyborg and others. Standard textbooks nevertheless continue to assure psychology students that there is no significant sex difference in intelligence. The relatively equal outcomes by sex on most intelligence tests are in part a relic of test design. As one researcher put it: âfrom the very beginning test developers of the best-known intelligence scales took great care to counterbalance or eliminate from their final scale any items or sub-tests which empirically were found to result in a higher score for one sex over the other.â For example, Wechsler tests deemphasize spatial-relations tasks because they show a male advantage. Therefore, Prof. Lynnâs final estimate of a four-IQ-point difference between adult men and women â which is the average of results from Wechsler, Ravenâs Progressive Matrices, and several other tests â may be low.

As for the evolutionary causes of higher intelligence in males, Prof. Lynn writes: âIn all mammalian group-living species, males compete for territory or high status in dominance hierarchies to secure access to females and reproduction. A further probably evolutionary explanation lies in sexual selection.â He notes that there can be sexual selection for intelligence regardless of whether women are attracted to intelligence per se or only to the things it helps men get, such as resources and status.

âThe likely evolutionary explanation of earlier maturation of girls,â Prof. Lynn writes, âis that it is advantageous for them to begin reproducing in early puberty when they are sufficiently mature to have babies and look after them.â (Contemporary consternation over âteen sex,â with its implication that girls should never reproduce until at least in their 20s, would have mystified early hominids.)

Sex differences in intelligence vary by race. Gerhard Meisenburg is among those who have found a male advantage among whites of over 35 percent of a standard deviation (written 0.35 d, and equivalent to 5 IQ points), compared to only 0.10 d (1.5 points) among blacks. This is consistent with J. P. Rushtonâs finding that brain mass differences by sex are smaller, both absolutely and relatively, among blacks than whites. Prof. Lynn comments:

The likely evolutionary explanation is that in the tropical and sub-tropical evolutionary environment of sub-Saharan Africa, black males had only a weak need for greater intelligence than females because plant and insect foods were available throughout the year and females could collect these for themselves and their children without the support of males. When early humans migrated into Europe, they found that plant and insect foods were not available in the winter and spring, and males had to hunt large animals to obtain food for themselves and their females and children. Hunting large animals is more cognitively demanding than gathering plant and insect foods.

In keeping with the usual three-way racial pattern analyzed by Rushton, we would expect to find even larger sex differences in average intelligence among Northeast Asians. This expectation is confirmed by comparisons of 45 sets of Wechsler Full IQ test scores: âEight of these samples were North East Asians in whom the median male advantage was 0.31 d. The other 37 were Europeans in whom the median male advantage was 0.21 d.â Mainstream scientists have been more candid about recognizing sex differences in specific abilities than in overall intelligence, or the general factor g. Even laymen notice that boys tend to do better at math than girls, while girls do better on verbal tests. Formal research supports this.

Adult men have an advantage of 0.29 d, or 4.35 IQ points, over women in nonverbal reasoning. In verbal reasoning, their advantage is smaller: 0.16 d in comprehension. Males have a greater mathematical problem-solving ability of 0.29 d in high school, which increases to 0.32 d in college. The average male advantage on the SAT math test has declined, but boys consistently do better than girls, especially at the highest levels.

The largest male advantages are found not in mathematics, however, but in spatial abilities. A 2019 meta-analysis found male advantages of 0.23 d in visualization, 0.48 d in spatial perception, and 0.66 d in âmental rotation,â meaning the ability to visualize how an object will look when rotated so as to be seen from another angle. This last figure is the largest sex difference of any kind that has been identified, and Wechsler tests are designed to exclude it entirely. In spatial ability overall, men have an advantage of .46 d, equivalent to around seven IQ points. These differences correlate with hormone levels; women exposed to higher levels of pre-natal testosterone have better spatial abilities than other women. Male superiority in spatial abilities is probably an evolutionary adaptation to hunting.

Men have an advantage over women in general knowledge. A 2002 study by Richard Lynn and two colleagues measured the difference as 0.51 d. The difference is largest in the categories of Current Affairs, Physical Health and Recreation, Arts, and Sciences. Women score higher than males in the category of Family.

Men have faster reaction times than women, and it will come as a surprise to no one that men throw more accurately than women, whether at stationary or moving targets. The difference shows up by age four, and is independent of male superiority in spatial abilities. The evolutionary advantage for hunting should be obvious.

Girls have an advantage in verbal abilities, which persists through the end of high school but is lost in adulthood. However, their advantage in verbal fluency â defined as âthe ability to produce a larger number of words in a particular category (e.g., birds, dogs, etc.)â â persists throughout life. Girls do better than boys at tests of reading ability, reading comprehension, and writing ability. These advantages are probably part of their greater verbal ability in youth.

Girls and women also enjoy an advantage in learning second languages. This is probably because, in early humans as among the great apes, females were exogamous: They moved to join the group to which their mates belonged, while males stayed put. In cases of conquest as well, females became the prey of the victors, and their chances of survival and successful motherhood were better if they were good at picking up foreign speech.

Episodic memory is the ability to remember past experiences, such as what one was doing yesterday. Women are better at this for verbal data as well as âthings which cannot easily be placed along the verbal-spatial continuum, such as faces, odour, taste and colour.â Men have better episodic memory for spatial tasks. 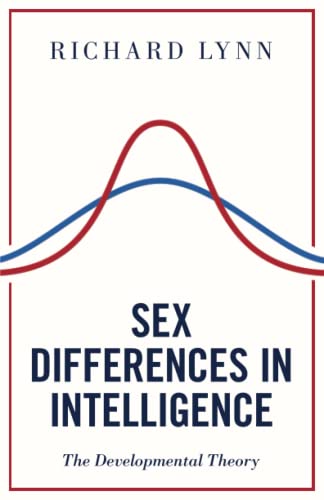 Finally, females have better social cognition, meaning an ability to decode non-verbal cues and infer what other people are thinking. Prof. Lynn finds no evolutionary explanation for this, but I have heard it speculated that it may be an adaption to caring for children too young to speak or because they have to deal with men, who are stronger and more violent than they are.

One of the best attested sex differences in intelligence is the wider distribution of male intelligence, with more men than women at both the high and low ends of the bell curve. Although the cover illustration of Prof. Lynnâs book appears to be based on this difference, he refers to this only in the final paragraph! This difference may go at least as far towards explaining high male achievement as an average IQ difference of four points.