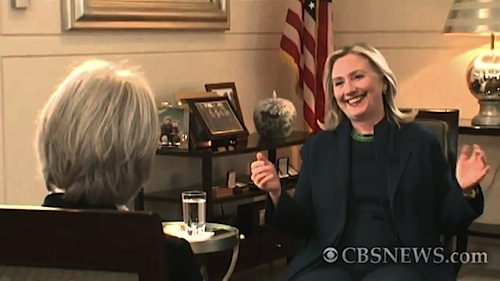 Remember when then-Secretary of State Hillary Clinton was so intent on a US attack on Libya that she disregarded the US Intelligence Community, the Pentagon, and even her colleagues in the Obama Administration to force her “humanitarian intervention”? Clinton was so distrusted by the Pentagon that they opened up their own lines of communication with Libyan officials — they knew she was feeding them and the State Department boldfaced lies.

Even members of Hillary’s own party in Congress were skeptical of her claims.

Gaddafi’s son and presumed heir, Saif, told then-Rep. Dennis Kucinich (an RPI Board Member) that Hillary was using false information to justify the coming US attack on his country. (Thankfully, Mr. Kucinich understood his Constitutional obligation to act as member of an equal branch of government and did his own investigation of Hillary’s claims.)

Saif told Kucinich that Hillary’s “information” about Libya was:

Hillary’s rebels, according to Saif were, as a Washington Times article reports, “not freedom fightersâ but rather jihadists whom he described as âgangsters and terrorists.â

Hillary got her war. The Washington Post, ever the lickspittle in the service of the US regime, shortly after the attack praised Hillary’s great foresight in forcing the US war on Libya:

What a success! Libya is now in the hands of ISIS and various Islamist terror gangs. The population is devastated. Saif was right: they were a bunch of terrorist jihadists.

Gaddafi’s other son, Saadi, is currently being held by “Libyan Dawn,” an al-Qaeda group that has emerged since the US “liberation” and has taken control of key parts of Libya. This week we see in a new video that Hillary’s humanitarian freedom fighters have taken to torturing Saadi Gaddafi in the must un-humanitarian manner (warning, graphic). Hillary’s humanitarians are a bunch of torturing thugs, and it’s all there on the tape. Will she be challenged on this? Don’t bet on it.

Meanwhile, another group of Hillary’s extremists have sentenced Saif to death in a mass trial with scores of others from the previous government. The trials were so bad they were even condemned by the International Criminal Court, which would also like to get its hands on Saif. The defendants had little access to legal council in what was a textbook show trial.

Hillary Clinton squealed with joy when Muammar Gaddafi was sodomized with a knife and murdered by her rebels. Is she likewise giggling somewhere as Gaddafi’s son has his feet beaten to a pulp with a metal rod while he is bound and slapped in the face and his other son is sentenced to death in a trial with no semblance to actual rule of law?

This is human rights, Hillary-style. What If They Are Hiding the Truth?
Andrew Napolitano
• 25 Comments • Reply Subscribe to All Daniel McAdams Comments via RSS
PastClassics