Previously: Base Dragging GOP, Conservatism Inc. Into Fight Against Critical Race TheoryâBut They Still Flinch From Calling It Anti-White Racism

America just got a new federal holiday. President Biden signed âJuneteenth National Independence Dayâ into law Thursday (June 17). The Senate vote was unanimous, and just 14 House members, all Republicans, voted against it. The holiday, which commemorates the day in 1865 that Union armies proclaimed the end of slavery in Texas, is yet another occasion to celebrate blacks, on top of Martin Luther King Day and Black History Month. Supposedly about slavery, it inevitably means more condemnation of the whites who practiced it, reinforcing the 1619 Projectâs preposterous claim that blacks are the real founders of America. This demonstrates the fatal limitations of the Congressional GOP and the Conservative Establishment. They say they oppose Critical Race Theory, but they just backed a holiday that enshrines CRT as state ideology. Only one Republican, Rep. Matt Rosendale of Montana, explained the path for the GOP to preserve the Historic American Nation.

Juneteenth almost became a federal holiday last year. It was blocked by Wisconsin Sen. Ron Johnson, who recently appeared to be emerging as patriot champion. But he only ever said he opposed Juneteenth for budgetary reasons, suggesting it replace Columbus Day. He did not oppose its passage this year.

That left Rosendale to lead a few brave Republicans to oppose it. âLetâs call an ace an ace,â Rosendale said. âThis is an effort by the Left to create a day out of whole cloth to celebrate identity politics as part of its larger efforts to make Critical Race Theory the reigning ideology of our countryâ [House Passes Bill to Make Juneteenth a Federal Holiday, by Dareh Gregorian and Haley Talbot, NBC News, June 16, 2021].

Rosendale got to the heart of the matter on Twitter:

I voted against a bill that would make Juneteenth National Independence Day a federal holiday. â¦ This legislation is the culmination of decades of efforts by the Left to prevent unashamed celebrations of our national story, heritage, and history.â

But more than that, Rosendale tweeted, Juneteenth will supplant July 4, just as MLK usurped the place of American presidents:

Their intent is to replace the Fourth of July with this new day, one that will inevitably focus on America’s darkest moments.

We’re not perfect as a country, but we are a great nation, morally, economically, culturally, and in many other ways besides. I will never support efforts to pull down that legacy and replace it with self-hatred.

The thirteen representatives who stood with Rosendale:

Here are the 14 House Republicans who voted on Wednesday against the measure. https://t.co/6BLJoMzSWe

Needless to say, the GOP âLeadershipâ embraced Juneteenth. Texas Sen. John Cornyn, the former Majority whip who has made himself one of the worst of Republicans over the last year, orchestrated its passage in the upper chamber and condemned Rosendaleâs incisive criticism as âkookyâ [House Passes Bill to Make Juneteenth a Federal Holiday, by Dareh Gregorian and Haley Talbot, NBC News, June 16, 2021]. It was, Cornyn said in typical GOP boilerplate, âa big step in our nationâs journey toward equalityâ [Cornyn Bill to Make Juneteenth National Holiday Passes Senate, Cornyn.Senate.gov, June 15, 2021].

The Heritage Foundationâs retiring black President Kay Cole James demanded conservative support. It is not a âwokeâ holiday, she argued, but a day to celebrate how America is a ânation devoted to liberty for allâ [What Is Juneteenth, and Why Should Every American Want To Celebrate It?, by Kay Cole James, The Washington Times, June 16, 2021].

Right. Thatâs why the Juneteenth hashtag in her tweet about the op-ed includes a black power fist with rainbow-colored figuresâLGBT and black radicalism in one symbol. James sounds pretty âwokeâ to me.

#Juneteenth is worthy of celebration by all Americans. Thatâs because itâs the day that we began to live up to one of the greatest principles we professed as Americans: a nation devoted to liberty for all. @WashTimesOpEd 2/2https://t.co/n4mMJBvIq5

Donald J. Trump is also guilty. He made passing it a central part of his silly Black Platinum Plan, and actually brags he popularized it. Of course It didnât help win any black votes [Trump pledges to make Juneteenth federal holiday in bid for Black voters, by Steve Holland and Lisa Lambert, Reuters, September 25, 2020].

Cornyn, James, and other Republicans claim Juneteenth reaffirms American patriotism, even though it dwells entirely on Americaâs much-touted original sin. Thatâs delusional. Itâs more about reminding America about the misery of slaveryâand that white caused itâthan the glory of emancipation.

But the Left gets it. They say the purpose of the holiday is to educate everyone on âsystemic racism.â

As psychiatrist Khadijah Booth Watkins explained for The Washington Post:

It really just highlights the continued struggle against structural racism. Itâs a place to talk about where it started, and we canât ignore that it continues. This just gives the history … to understand what is structural racism and what needs to be done to unravel systemic racism

Every piece of public policy must be viewed in a different, new light. Itâs not enough for our laws and our budgets to be race-neutral; we have to find ways to be anti-racist in Dover, Washington, and across the country.

This legislation is just a first step in addressing the horrific ills of our country. We need to transform the lives of our Black neighbors in a bold and meaningful wayâfrom passing the For the People Act to the Commission to Study and Develop Reparation Proposals for African-Americans Act, there is much more to be done. We need to go beyond commemoration and take action that will truly address the continuous, systemic impacts of slavery.

Our nation has so much work left to do in addressing the legacy and trauma of slavery and systemic racism that persists to this day. Making Juneteenth a federal holiday is long overdue and will represent a step forward in the path toward accountability, justice and healing.

Similarly, at the signing ceremony, Vice President Kamala Harris insisted Juneteenth is ânot only a day of pride. It’s also a day for us to reaffirm and rededicate ourselves to actionâ [Juneteenth Is Now A Federal Holiday, by Alana Wise, NPR, June 17, 2021].

New York Rep. Alexandria Ocasio-Cortez accused the 14 Republicans who opposed the holiday of representing their baseâs racism. She told reporters that Juneteenth is important because it lectures our nation about racial prejudice.

AOC: âThis is pretty consistent with the Republican base. Whether it is trying to fight teaching basic history around racism, the role of racism in U.S. history. You know there is a direct through line from that to denying Juneteenth.â pic.twitter.com/oMZoMIbwHJ

In other words, Democrats openly plan to use Juneteenth as way to advance their anti-white agenda.

The âkookyâ side are the supporters of Juneteenth, not its opponents. The vast majority of rank-and-file Republicans side with the skeptics. Only seven percent of Republicans polled by Gallup support it; 43 percent oppose it, and 50 percent donât know or never heard of it. Even the general population isnât enthusiastic for the holiday. Only 35 percent of those polled back it; 25 percent say no, and 40 percent donât know or are unfamiliar with it. Those numbers hardly justify a new federal holidayâmuch less near unanimous Congressional GOP support [Most Americans Know About the Juneteenth Holiday, by Justin McCarthy, Gallup, June 15, 2021].

The GOP effort to oppose CRT in schools, business and government will be for nothing if the entire country celebrates a holiday that promotes anti-white racism. Every school child will now learn how evil their country is, and that we owe blacks reparations. Imagine how much harder will be to oppose racial socialismâmeaning grand larceny from whitesâwith a national day of mourning over slavery.

Again, we replaced national holidays honoring Washington and Lincoln with Martin Luther King Day, which made the philandering Communist sympathizer and accomplice to rape more important than the Founding Fathers. (There’s still a Presidents Day, but MLK day is the only national holiday honoring one man.)Who and what we choose to remember and celebrate shapes our national culture. What lessons do Republicans think Americans will take from a day to bemoan slavery? They are more likely to share AOCâs views than Kay Cole Jamesâs.

Disheartening as well was the pitiful opposition contrasted to the strong, principled resistance to MLK Day in the 1980s, when conservative leaders such as Sen. Jesse Helms leading the fight. Now weâre left with just 14 Republican congressmen, and just one of them speaking out.

Then again, fourteen is still better than none. Last year, it looked like no Republican would oppose it at all.

As Rosendale said, we can expect Juneteenth to usurp Independence Day because it celebrates blacks rather than dead white men. July 4, after all, celebrates the signal achievement of white slave owners. 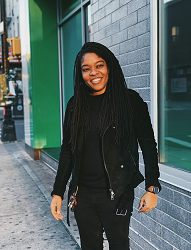 Thus last July 4, Kelsey Smoot [Email her] a PhD candidate in American Studies at William and Mary College, whose interests include âQueer Studiesâ and âRace/Racism,â explained it this way:

It is difficult to take pride in being American, to celebrate âIndependence Day,â when I am deeply aware of the ways in which my citizenship is constrained by a society laden with intolerance and oppression. â¦

So on the evening of the 4th, as fireworks explode in the distance and many Americans are staring upward into an evening sky illuminated by dazzling light shows, I will be at home, tacitly awaiting the 5th.

[Juneteenthânot the Fourth of Julyâwas the real Independence Day, The Guardian, July 4, 2020].

As the 1619 Project teaches, we can no longer have a history centered around whites. It must focus on blacks and pretend they made our country [The 1619 Project Devours Its Liberal Parents, by Robert Hampton, Counter-Currents, January 28, 2020].

The one upside to all this: July 4th will now be a day essentially for white Americans. Only those who donât mind celebrating a day honoring dead white men will carry it on. It will be a holiday for us to remember our heritageânot to celebrate the multicultural hellhole that is the Globalist American Empire today.

Although the majority of Republicans politicians are still cowed by Leftist racial propaganda to fight for the Historic American Nationâwhich is why Juneteenth is now a federal holidayâat least Rep. Rosendale shows patriots how they can resist. ← Base Dragging GOP, Conservatism Inc. In...
Current Commenter
says:
Current Date at Time Now
Leave a Reply - Comments on articles more than two weeks old will be judged much more strictly on quality and tone
Cancel Reply
Commenting Disabled While in Translation Mode