See also by Paul Kersey about Georgia: The Atlanta School Scandal After A Year and The âGreat Treeâ Of Atlantaâ¦And The Not-Coincidental War Against White America

Brian Kemp has declared himself the next governor of Georgia and resigned as The Peach Stateâs secretary. But he might not want to discard the classified job ads just yet. Neither can the GOP/GAP relax: this election shows indisputably that demography is destiny and current immigration policy, unless checked, is right on the edge of Electing A New People.

(On that note, an aside: When will right-leaning libertarians get it through their thick skulls that normal Americans are not preoccupied with legalizing dope and prostitution and repealing occupational licensing laws? Voting for oddball candidates wasnât a problem in 1980. Back then, the country was overwhelmingly white and Republicans could still win handily. But itâs 2018. We can no longer afford to make dogmatic ideological statements in the voting booth that sink imperfect but basically good candidates).

Anyway, the radical Abrams and her Leftist supports wonât give up easily:

âBrian Kemp is 25,622 votes above the threshold for a runoff election. Twenty-five thousand votes of nearly 4 million cast are at issue in this race,â Abrams campaign manager Lauren Groh-Wargo said on Thursday. âBy (Kempâs) own admission, there are at least 25,000 outstanding votes, and hundreds if not thousands of more that we are learning about and discovering every day.â

But it wasnât just a candidate for the party of legal dope and prostitutes that hurt Kemp. It was demographics.

Demography, the George governorâs race shows us, is destiny.

Blacks, of course, were all in for the gap-toothed girl. They gave her 92 percent of their vote. But Kemp received just 74 percent of white votes. Meanwhile, Abrams bested even Crooked Hillary among white college women, 26 to 21 percent. [Stacey Abrams Vows To Remain In Georgia Governorâs Race Until âEvery Vote Gets Counted,â CBS News, November 7, 2018]

Conservatism Inc. would have us believe race is irrelevant in electoral politics, and that identity politics is a bridge only left-wing collectivists will cross. Well, the demographic change in Georgia through the past 30 years made Kempâs predicament predictable. And it means the right better get some identity politics of its own.

The voter registration figures tell a story thatâs been unfolding for years: Georgiaâs voting population is undergoing a consistent demographic shift that could influence which candidates and political parties win elections.

In the race for governor, about 70 percent of white voters support Republican Brian Kemp, and 92 percent of black voters back Democrat Stacey Abrams, according to an AJC poll conducted this month. Election Day is Nov. 6.

More Georgians than ever are registered to vote â over 6.9 million out of the stateâs total population of 10.4 million. …

African-Americans make up about 30 percent of the stateâs active registered voters, about the same percentage as two years ago. Since 2010, the portion of black voters has inched up by about 1 percentage point.

The share of white active voters in Georgia has been decreasing in recent years, from 62 percent in 2010 to 54 percent today.

The first time Tammy Garnes visited a school in Cobb County, 10 years ago, she left in a hurry. It was just too white.

âI want to surround my children with black people,â said the film producer, who was sitting at a table in Mariettaâs Double Take Cafe with a friend.

But when the Garnes family made a second visit to Marietta two years ago, Tammy found a different world: A diverse school, several fellow black California expatriates, a sophisticated town and a true gumbo of cultures. Since then sheâs enjoyed Guatemalan cuisine, made Hindu friends and sent her daughter to a friendâs Brazilian baptism.

âWe didnât think that was what Cobb County looked like,â said Garnes. âIt is a true melting pot, and that is a beautiful thing to see, with everything happening in the world.â

In four years, this former white conservative bastion is expected to become âmajority minority;â that is, minority residents will outnumber white residents.

The massive demographic shift is evident everywhere. Cobb schools offer a dual-language immersion program in which students are taught half the day in Spanish and half the day in Englishâto the dismay of some longtime residents. In Mableton, where African-Americans accounted for 4 percent of the population 40 years ago, a black man is the state senator. In 1990, one in 10 people in Cobb County was black. Now, itâs more than one in four. And in 10 years, it will be close to one in three, according to projections from the Atlanta Regional Commission.

The racial transformation of Metro Atlantaâs Clayton County was complete in 2005 with the election of Victor Hill as the countyâs first black sheriff. Clayton was 92 percent white in 1980. Today, it is 11.2 percent white and 68 percent black.

The first thing Hill did after he was sworn in? He fired the top-ranking and other whites, positioned snipers on the roof, and marched the whites out of the building [Georgia Sheriff Fires Workers, But Then A Judge Intervenes, The New York Times, January 5, 2018]. Clayton County reminds us not only that race matters but also that demographic change is bad news for whites, particularly in government work. If your boss is black, watch out.

The racial transformation of Metro Atlanta counties from white to black or minority (Fayette, Clayton, DeKalb, Rockdale, Cobb, Gwinnett, Henry, and Forsyth) followed a simple pattern: whites flee Fulton County, where Atlanta is located, for good schools and safeâmeaning whiteâcommunities. Minorities follow to escape the disfunction they create, bring it with them, then whites move on again.

But back to votes and elections. Immigration is a big part of the demographic shift that has enabled Democrats to prevail in once solidly Republican communities. More immigrants means more Democratic voters.

An interactive map in the Atlanta Journal-Constitution tracks the percentages. [Map: Demographic Patterns In Every Georgia County, 1990-2050, AJC.com, by Saurabh Datar, April 27, 2017] Georgia is being Californicated.

Check out the screenshots below: 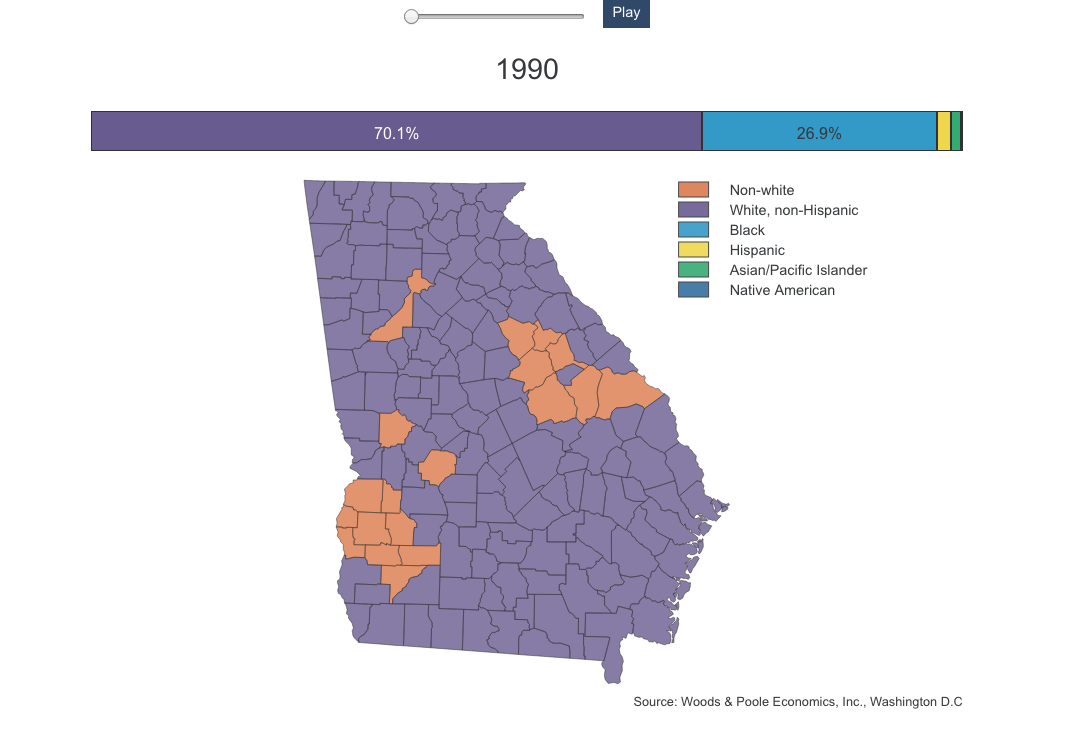 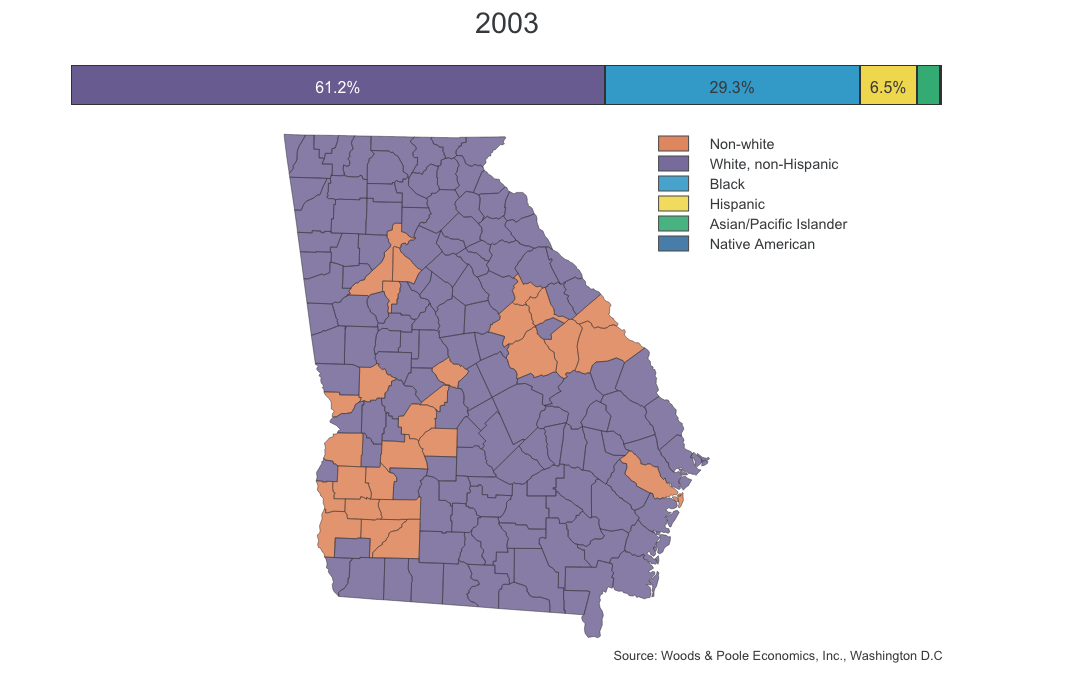 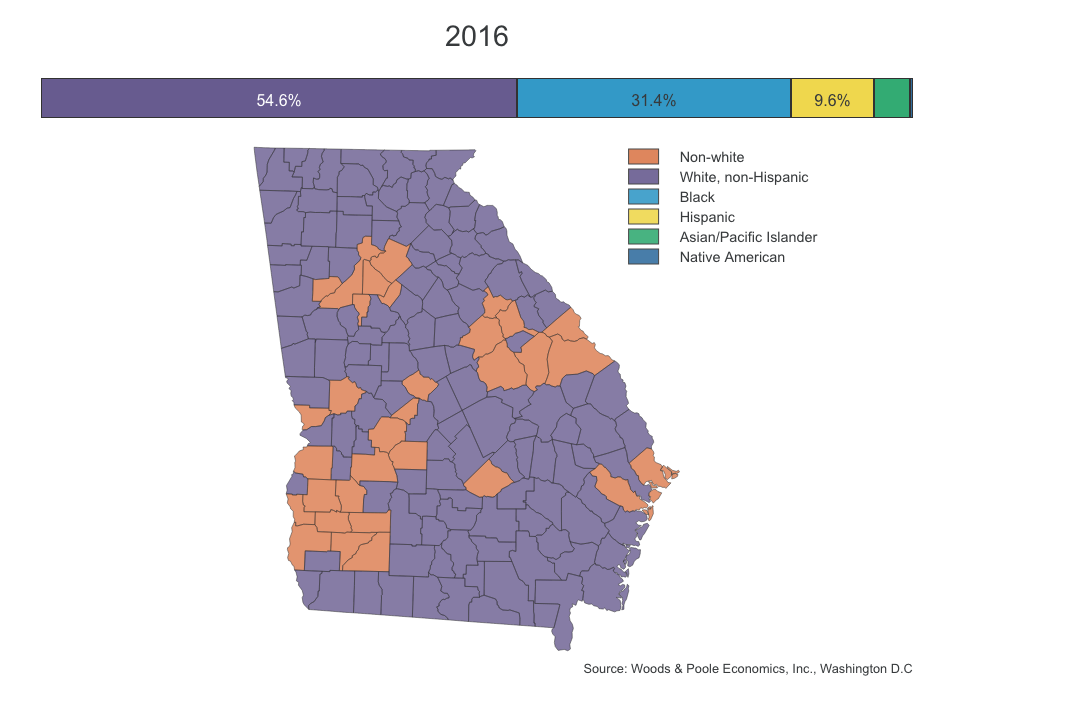 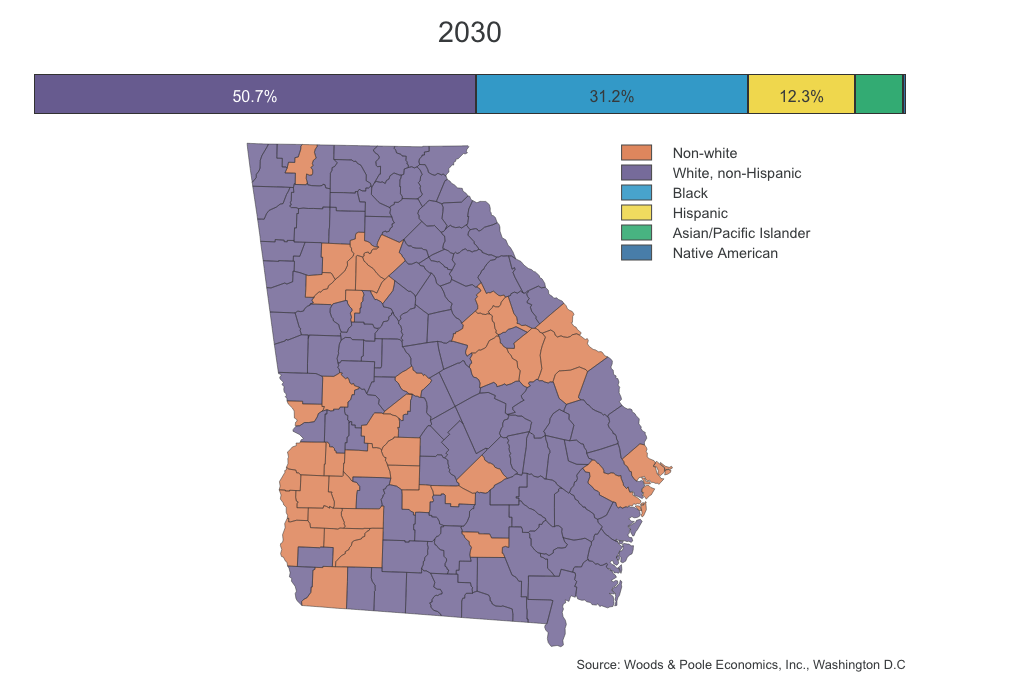 The tipping point for whites is just 15 years away. But itâs no certainty that a Republican can win again even between now and then. Whites are still a majority in the country, but unlike blacks and Hispanics, they donât vote monolithically. It doesnât take many white votes for a Democrat to kill a Republican victory. Remember, Donald Trump needed the Electoral College to prevail in 2016. Hillary Clinton won the popular vote.

Thatâs why the Left was so furious about Trumpâs victory. Whites in flyover country and the industrial states put him in the White House.

And thatâs why Leftists such as Michelle Goldberg of the New York Times, were so invested in an Abrams victory. They saw it as a kick in the groin to Trump and his âwhite nationalistâ supporters, by which she means anyone a shade or two lighter than Alexandria Ocasio-Cortez, the illiterate buffoon heading to Congress from New Yorkâs 14th congressional district:

Kemp is the candidate of aggrieved whiteness. During the primary, he ran an ad boasting that he drives a big truck âjust in case I need to round up criminal illegals and take âem home myself.â (That would be kidnapping.) A person who claimed to be a Kemp canvasser recently wrote on the racist website VDare, âI know everything I need to know about what happens when blacks are in charge from Detroit, Haiti, South Africa, etc.â Kemp cannot be blamed for the words of his volunteers, but heâs made little discernible effort to distance himself from bigots.

On Saturday morning, Abrams closed by reminding the crowd of Kempâs views on democracy. âHe said he is concerned that if everyone eligible to vote in Georgia does so, he will lose this election,â she said. âLetâs prove him right.â In a week, American voters can do to white nationalists what they fear most. Show them theyâre being replaced.

[We Can Replace Them: In Georgia, A Chance To Rebuke White Nationalism, October 29, 2018. Link in original (to MediaMatter s) our piece is here. ]

Of course, it wasnât just a chance to ârebuke white nationalism.â It was a chance to rebuke all whites. Goldberg wants them replacedâ¦with people who look like Abrams, and, of course, Ocasio-Cortez. 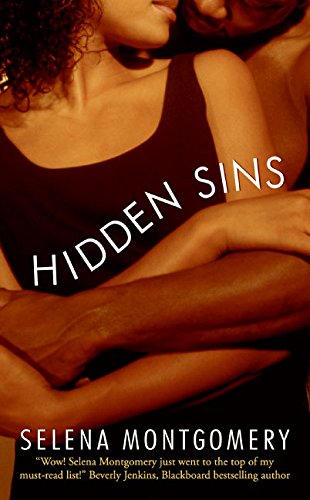 Goldberg and the Left have always known demography is destiny. If it werenât, they wouldnât be pushing the dispossession of the historic American nation via immigration, and as Georgia goes, Abrams wouldnât have had a shot at the governorâs mansion. Sheâd still be writing romance novels under the name of Selena Montgomery. [Plot twist: Stacey Abrams, trailblazing Georgia politician â¦ and romance novelist? by Dartunorro Clark, NBC, May 23, 2018]

Even Never Trumper Bill Kristol finally gets it. âI’ve always disliked the phrase âdemography is destiny,â as it seems to minimize the capacity for deliberation and self-government, for reflection and choice,â the top neocon Tweeted. âBut looking at tonight’s results in detail, one has to say that today, in America, demography sure seems to be destiny.â

I've always disliked the phrase "demography is destiny," as it seems to minimize the capacity for deliberation and self-government, for reflection and choice. But looking at tonight's results in detail, one has to say that today, in America, demography sure seems to be destiny.

Gee, Bill, if only there were something we could do about that. Race-Realist GA Canvasser Speaks
Iâm Doing This For Michelle Goldberg Too, Even If She Doesnât Realize It
Nathan Doyle
• 91 Comments • Reply

The Pox That Has No Name
or, Will Exhibiting Art by Black Artists End Rioting and Looting?
Robert Weissberg
• 108 Comments • Reply
← The Untold Story of How a Black Man Cou...Kemp Victory Only Delays the Reckoning →
Hide 156 CommentsLeave a Comment
"Georgia to Bill Kristol: Demography IS DestinyâLet's Do Something About It!"
• 156 Comments
Commenters to Ignore
Commenters to ignore (one per line)

← The Untold Story of How a Black Man Cou...Kemp Victory Only Delays the Reckoning →
Current Commenter
says:
Current Date at Time Now
Leave a Reply - Comments on articles more than two weeks old will be judged much more strictly on quality and tone
Cancel Reply
Commenting Disabled While in Translation Mode