Photo credit: Sharon Mollerus, CC BY 2.0
◄►Bookmark◄❌►▲ ▼Toggle AllToC▲▼Add to LibraryRemove from Library • BShow CommentNext New CommentNext New ReplyRead More
ReplyAgree/Disagree/Etc. More... This Commenter This Thread Hide Thread Display All Comments
AgreeDisagreeThanksLOLTroll
These buttons register your public Agreement, Disagreement, Thanks, LOL, or Troll with the selected comment. They are ONLY available to recent, frequent commenters who have saved their Name+Email using the 'Remember My Information' checkbox, and may also ONLY be used three times during any eight hour period.
Email Comment Ignore Commenter Follow Commenter
Something Here
Search Text Case Sensitive  Exact Words  Include Comments
List of Bookmarks

We are witnessing mass delusion of historic proportions.

This video is available on BitChute and Brighteon.

The death of George Floyd has given rise to one of the worst mass delusions in American history â maybe world history. It is a case of collective madness that â frankly â makes me ashamed to be an American.

Letâs start with George Floyd himself. Here are his arrests, going back to 1997. His first was at age 23, and during the next 10 years he was in and out of the big house *eight* times, mostly for larceny and drugs.

Floyd never married but had five known children, ranging in age from six to 22 at the time of his death.

Floydâs final crimes were taking illegal drugs, passing counterfeit money, and resisting arrest. He struggled persistently with police officers and flopped down on the street rather than get into a cop car . It was only then that Derek Chauvin restrained him with a knee on the neck for those world-famous nine minutes. If Floyd had done what the officers told him to, we would never have heard of him. Floyd had serious heart disease, had swallowed a potentially lethal dose of fentanyl, and his lungs were so full of fluid they weighed two to three times the normal weight. Obviously, that contributed to his death. Still, maybe Chauvin kept Floyd down too long. If that was bad policing, he deserves punishment, but it is absurd to find, as the jury did, that he acted with a âdepraved mindâ â like someone firing indiscriminately into a crowd â and was guilty of murder.

Even more absurd â and this is at the heart of the mass insanity â is the idea that this was a vicious act of racism. Chauvin was a 19-year veteran. Every policeman in America knows that the wrong move with a black criminal can end your career and ruin your life. A black officer, Alexander Keung, was right next to Chauvin with his knee on Floydâs back. There was a hostile crowd taking videos, and the officers themselves wore bodycams. But we are supposed to believe that Derek Chauvin committed a shocking act of racism that unmasked the deep bigotry in the entire policing profession â and in the whole country? Only the willfully blind can believe this, but our country is run by the willfully blind.

In America, there is an enormous, unsatisfied demand for racism. Thatâs because racism is the *only* permitted explanation for black failure, no matter how degenerate. If we refuse to consider any other cause for it, there must be a terrible lot of white racism out there. And that is why blacks and the media are frantic to find it. How would Derek Chauvin have treated a six-foot-four, 223-pound, muscular *white* man who was foaming at the mouth and acting like a lunatic? Just as he did George Floyd. I see no reason to think otherwise.

But the media knew better, and the country exploded in riots, looting, and arson so bad that 200 cities imposed curfews and 30 states â every one of these â had to call out the national guard to restore order. The billions of dollarsâ worth of insured damages were an American record for civil disorder. Incredibly, intelligent, highly paid people seemed to believe that those nine minutes in Minneapolis taught them harrowing new facts about America. So harrowing and so new that, unlike in any previous race riots, the country lathered blacks with money. The Economist estimated that Americans donated more than $10 billion to Black Lives Matter-related causes. 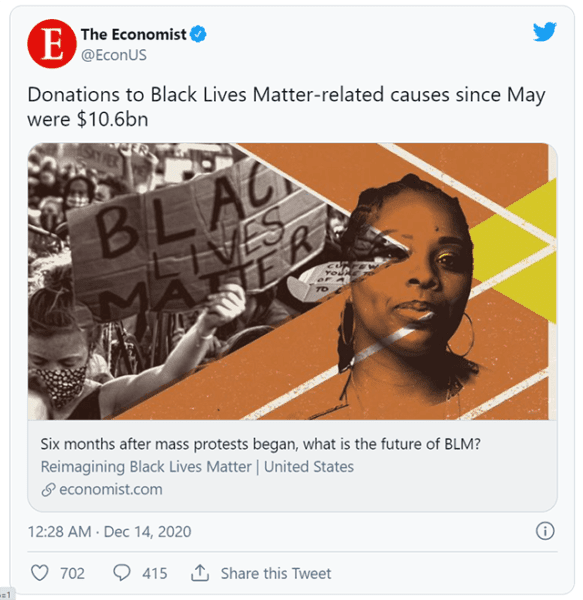 Millions of people seemed to believe that every white person is personally responsible for black failure and degeneracy, even if they are trying to be nice to blacks. Thatâs what the slogan âwhite silence is violenceâ means. You commit violence by doing and saying nothing.

Thatâs why Elle Magazine, a fashion magazine for women, ran a big article explaining âWhy white silence on racism is deadlyâ and that âsilence is complicity.â This is a brand-new form of insanity. Itâs white supremacy stood on its head. White people are so powerful â and blacks are such pathetic pawns and stooges â that we cause violence by doing nothing. We can even make black people attack Asians by doing nothing.

Isnât that what Jennifer Ho, Professor of Asian American Studies at the University of Colorado is saying when she writes that âWhite Supremacy is the root of all race-related violence in the US,â ?. Specifically, she writes âwhen a Black person attacks an Asian person, the encounter is fueled perhaps by racism, but very specifically by white supremacy. White supremacy does not require a white person to perpetuate it. Wow. We can exercise evil powers from miles away.

This is related to Critical Race Theory â the idea that all white people are inherently privileged and racist and that we oppress everyone. Critical Race Theory is now being taught in K through 12 schools. As part of CRT, Wellesley, Massachusetts schools set up a âhealing spaceâ only for non-whites. As the district explained, âThis is a safe space for our Asian/Asian-American and Students of Color, *not* for students who identify only as White.â

Donald Trump banned CRT training for federal employees but on his first day in office, Joe Biden started it back up. An ex-Space Force commander says that a defense department training video claims that white people are âinherently evil.â Secretary of Transportation Pete Buttigieg says âRacism is âphysically built intoâ the countryâs highways.â

In her first speech to the General Assembly, Joe Bidenâs U.N. Ambassador explained that âWhite Supremacy Is Weaved into Our Founding Documents and Principlesâ

The Heritage Foundation says that Joe Biden wants to take CRT to the next level by forcing it into all public schools. Oregon didnât wait. It adopted a manual called âDismantling Racism in Mathematics Instruction,â because the reason blacks and Hispanics arenât good at math is because math instruction is âwhite supremacist.â

Being white is so awful that an organization called Recovery from White Conditioning has a 12-step program â like Alcoholics Anonymous â to cure white people of whiteness. Coca Cola told its workers to be âless whiteâ in order to fight racism.

Blacks are sure getting the message. The *student body president* of Christopher Newport University in Virginia â under the name of Fuck Off Honkeys â tweets, âI hate white people so much itâs not even funny.â 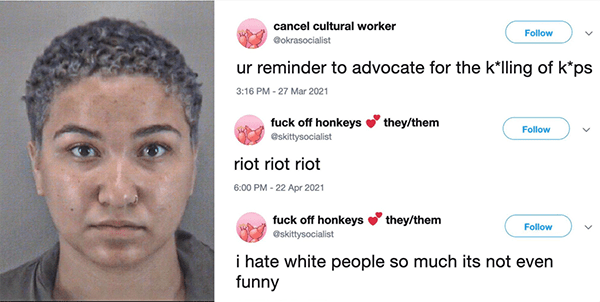 In an article called âWhiteness is a Pandemic,â a prominent black author writes that âWhite supremacy is a virus that, like other viruses, will not die until there are no bodies left for it to infect.â Whatâs the solution? âStanford Student Government Candidate Says âWhite People Need To Be Eradicatedââ A best-selling book of prayers has one by a black woman that begins: âDear God, Help me Hate White People.â

Would this have happened without George Floyd and a year of riots? I donât think so. I think itâs thanks to George that musicologists at Yale think words like âpitchâ and âharmonyâ might be white supremacist. And I think itâs why this guy, who teaches classics at Princeton, has decided that studying Greece and Rome makes people white supremacist and that the whole field of classics should be junked.

But letâs get back to George Floyd. After he died, his brother Philonise set up a crowd-funding appeal that raised $13 million in one week and broke all GoFundMe records, with more than 500,000 donations from 125 countries. Just 10 days after Floydâs death, there were public murals in scores of cities, including Dallas, Miami, Los Angeles, Nairobi, and Berlin. This one is in Belfast, Ireland.

The intersection where Floyd died is now George Floyd Square. The police have to stay out, and there are special instructions for white people who want to pay respects. They have to listen, learn, and mourn, and must not forget they are there to support, not be supported. Floyd had three funerals: Minneapolis, Charlotte North Carolina, and Houston. Here he is in a golden coffin on his way to eternal rest. At least a dozen universities have set up scholarships in his name, though so far as I know, none has granted him a posthumous degree. In Alexandria, Virginia, we could soon have George Floyd Memorial High School.

By the anniversary of his death, May 25th had become almost a religious feast day, and woe to any who refuse to bend the knee. Duke University investigated a flier someone put up of Floydâs toxicology report. Duke said that if a student posted this â it was verifiable information about the fentanyl, meth, and cannabis in Floydâs body â the student would be punished.

Floydâs brother Philonese talked to the President about what is going to be called the âGeorge Floyd Justice in Policing Act.â Republicans havenât yet agreed to it, and Philonese complained to reporters: âIf you can make federal laws to protect a bird, the bald eagle, you can make federal laws to protect people of color.â Is he such a bonehead he thinks itâs legal to kill black people? Are the media that reported this as if it were a profound insight equally stupid?

And why do we need another law? Derek Chauvin was found guilty and faces up to 40 years in prison. What more do they want? The death penalty?

Kamala Harris, who was also at the White House, praised the âcourage, grace, and resilienceâ the family has shown in bereavement. The family didnât pay much attention to Floyd when he was alive, and Iâm sure the $13 million in GoFundMe money eased the pain. Along with the $27 million the city of Minneapolis paid the family.

So little Gianna should be fixed for life, but sheâs wrong. Daddy didnât change the world. He was a drug-addict who fought the police and died. It was Derek Chauvin who did something. If people really think Floydâs death taught us something about America, they should thank Derek Chauvin.

Do the people who say white silence is violence and that music theory is white supremacist really believe it? Or are they so terrified they think they have to go along? This is a stupefying, bewildering case of believing not just the improbable but the impossible.

Mass delusions always fall apart â eventually. You can run a society for only so long on mania and foolishness. People are waking up. Three states have banned Critical Race Theory in schools, and a dozen more are likely to ban it soon. Sites like ours â American Renaissance â are more popular than ever, despite endless bans and shadow-bans.

Even whites eventually rise up against insanity. They will not hang their heads in perpetual shame and walk off the stage of history. The fight starts now.