Everything is connected, but some things are more connected than others. Letâs start with Margaret Hodge, the arrogant Jewish Labour MP whose criticism of Jeremy Corbyn and support for censorship I discussed in âLabourâs Gas-Chamber Blues.â After Hodge was threatened with disciplinary action for what she said about Corbyn, her high-powered lawyers wrote a letter to the party complaining about the way she was being treated. The letter was seven pages long and wonât have come cheap. But Hodge is a millionaire and can well afford it.

Then again, maybe she got a discount or even free service, because her high-powered lawyers are an anti-Brexit Jewish firm called Mishcon de Reya. The firmâs leading light and deputy chairman is a Jewish activist and literary scholar called Anthony Julius, whose extreme ethnocentrism and ability to find anti-Semitism in the most surprising places were described by Andrew Joyce at the Occidental Observer in 2013. I myself have discussed him here too. In âHigh-Voltage Hateâ I described how he had written a glowing review of his friend Nick Cohenâs anti-censorship polemic You Canât Read This Book (2012), which he said âstands alongsideâ libertarian classics like âMiltonâs Areopagitica (1644) and Millâs On Liberty (1859).â It appeared, then, that Anthony Julius was a passionate supporter of free speech. But appearances were deceptive. In âMoshe Is Monitoring You,â I described how he had been the lawyer for Ronnie Fraser, a Jewish academic who made a pro-Israeli, anti-Palestinian claim against the University and College Union. The claim was dismissed by a panel of judges as âan impermissible attempt to achieve a political end by litigious means.â The judges condemned the academic and his supporters for betraying âa worrying disregard for pluralism, tolerance and freedom of expression.â I concluded that Julius did not genuinely believe in free speech and that he was happy to support censorship when he and his fellow Jews could benefit from it. Now more proof has arrived of his hostility to free speech.

Letâs visit the ancient Mediterranean island of Malta, which was the setting, as Anthony Julius is no doubt well-aware, of Christopher Marloweâs poisonously anti-Semitic tragedy The Jew of Malta (c. 1590). In 2017 a real tragedy struck Malta when the campaigning journalist Daphne Caruana Galizia was blown up with a car-bomb by some of the corrupt businessmen and politicians whose activities she had been trying to expose. The Guardian has noted that, at the time of her death, âshe was fighting 47 civil and criminal defamation lawsuits from an array of business people and politicians, brought by multiple law firms.â 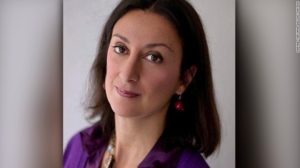 Can you guess the name of one of those bullying, pro-censorship law firms? Thatâs right: Mishcon de Reya was a leading member of the legal pack hounding Caruana Galizia at the time of her death. According to the Guardian it âspecializes in â¦ defamation cases,â but that didnât stop its leading light Anthony Julius being appointed in December to the board of trustees at the âwritersâ campaign group English PEN,â whose âmission is to defend writers and freedom of speech.â Understandably enough, Caruana Galiziaâs sons have complained to English PEN about Juliusâs appointment, saying that his firm Mishcon de Reya âsought to cripple her financially with libel action in UK courts. â¦ Had our mother not been murdered, they would have succeeded.â

Free-speech campaigners in Britain have often complained bitterly about wide-ranging British libel laws and the way theyâre used by rich foreigners to intimidate and silence critics who are subject to penalties here, whether or not they are actually based here. But Britainâs censorship-friendly laws obviously donât bother Anthony Julius. Quite the reverse: he and his firm make large sums of money from them. Mishcon de Reya are therefore the perfect lawyers for Margaret Hodge. Like her, they donât believe in free speech. In particular, Hodge and Mishcon de Reya want to severely restrict criticism of Israel and to end all criticism of Jewish behaviour in general.

So do the â68 rabbis from across UK Judaismâ who signed an âunprecedented letter condemning Labour antisemitism.â And so do the editors of Britainâs three main Jewish newspapers, the Jewish Chronicle, the Jewish News and the Jewish Telegraph, which took the âunprecedented stepâ of âpublishing the same front pageâ attacking Jeremy Corbyn at the end of July 2018. The joint front pages claimed that the âstain and shame of antisemitism has coursed through Her Majestyâs Opposition since Jeremy Corbyn became leader in 2015â and complained about âthe existential threat to Jewish life in this country that would be posed by a Jeremy Corbyn-led government.â

The Jewish community are campaigning for Labour to fully adopt an âinternationally recognizedâ definition of anti-Semitism that will make it much easier to intimidate and silence critics of Israel. The coordination and unity of the campaign have been remarkable. Like wasps from a threatened nest, Jews have risen in a swarm and descended on a common enemy, buzzing furiously and stinging viciously. Theyâve put aside some bitter antagonisms to do so. For example, the Orthodox rabbis who signed the joint letter would not even recognize their fellow signatory Laura Janner-Klausner, daughter of the alleged paederast Greville Janner, as a valid rabbi. As Kevin MacDonald and Steve Sailer have noted, one long-lasting strategy of Jewish life has been to turn aggression and hostility outwards on the goyim, thereby minimizing internal disputes and schisms.

Another important feature of the campaign has been the way it is founded on a ludicrous but unassailable axiom of anti-racism: that a minority is always in the right and must never be accused of employing dishonest means or pursuing selfish ends. A complementary axiom of anti-racism states the exact opposite of the White majority, namely, that it is always in the wrong and constantly employs dishonest means to pursue selfish ends.

But I suspect that many members of the White majority in Britain are now seeing Jews in a new light. Itâs very difficult to mistake the hysteria and hyperbole of the Jewish campaign against âanti-Semitismâ or to overlook the selfish ends that it is certainly meant to serve. British Jews believe in freedom of screech, not in freedom of speech. Iâm sure that many more British goys now wish the screechers would just shut up and go away. The Messiah in England
Israel Shamir
• 131 Comments • Reply
← In the Land of LiesPoison for the Goyim: More Hysteria and... →
Hide 129 CommentsLeave a Comment
"Gas-Chamber Blues Revisited"
• 129 Comments
Commenters to Ignore
Commenters to ignore (one per line)

• Replies: @Erebus
← In the Land of LiesPoison for the Goyim: More Hysteria and... →
Current Commenter
says:
Current Date at Time Now
Leave a Reply - Comments on articles more than two weeks old will be judged much more strictly on quality and tone
Cancel Reply