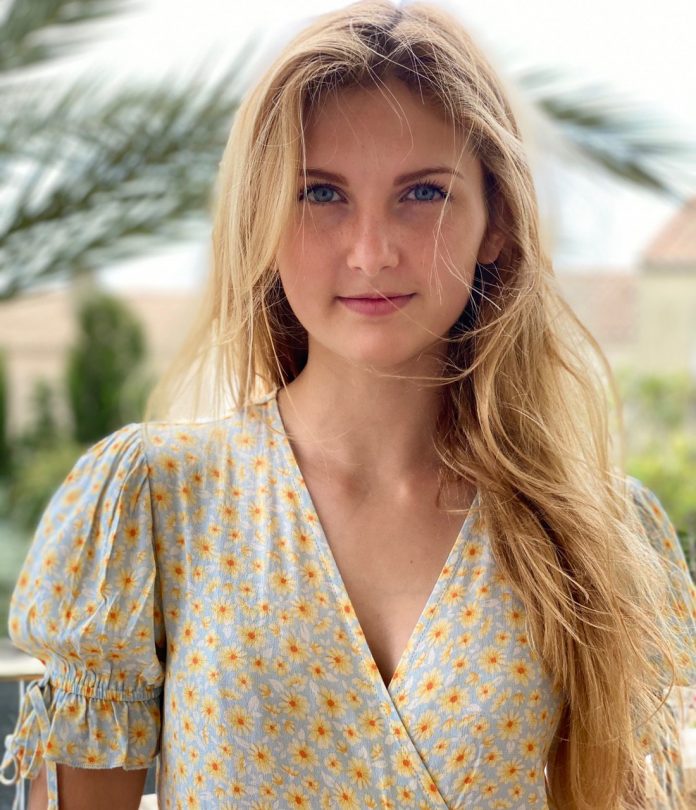 Some 2-3,000 Parisians, mostly young, gathered peacefully in their cityâs Place Denfert Rochereau this last Saturday (February 20) to reclaim their freedom of speech, and more specifically, to support GÃ©nÃ©ration Identitaire (âGeneration Identityâ), the youth group currently targeted by the French government for dissolution [France: Protesters oppose move to disband anti-migrant group, by The Associated Press, February 20, 2021]. The vocal crowd shouted slogans like âWe are at home,â and among the well-known faces such as Jean-Yves Le Gallou, Florian Philippot or Jean Messiha, was a striking one: ThaÃ¯s dâEscufon, GI spokeswoman and rising star.

The government wants that generation to shut up about their âidentity,â of course, because it doesnât fit in the newly globalized, Islamified France. But the disarmingly stunning dâEscufon says no to that new France. Her angelic face has been everywhere since the government announced it would shut down the patriotic group. Unlike some who would have been intimidated into silence, dâEscufon saw an opportunity, and has since appeared on several prime-time TV shows. GIâs message went to previously undreamt of audiences. Relatively unknown before then, except in the identitarian right, she has become the voice of her young countrymen, the silent victims of diversity forced to live in fear from urban violence or Islamic terror. [Interview with ThaÃ¯s dâEscufon from Generation Identitaire, The New Prometheism, February 13, 2021]

Generation Identitaire was born in 2012 as the youth wing of the Identitarian Block, but eventually became an entity of its own. It has not been found guilty of any crimes: its dissolution is naked political repression, as was the case with banning of Oeuvre FranÃ§aise, Jeunesses Nationalistes, Third Way and Bastion Social in the last few years.[France bans three far-right groups after activist’s death France24, July 10, 2013] For two years, the Left-wing Ligue internationale contre le racisme et l’antisÃ©mitisme (LICRA) has been hectoring the government to ban Generation Identity. Now, the authorities have listened [Pourquoi il faut dissoudre GÃ©nÃ©ration identitaire, (Why we must dissolve Generation Identity) LICRA, April 4, 2019].

On February 13, Interior Minister GÃ©rard Darmanin announced that he was launching the dissolution process of GI, a hypocritical move for a government that had pledged to defend freedom of speech in the wake of Samuel Patyâs beheading by an Islamist on October 16 [France to ban far-right group Generation Identity, by Stephanie Trouillard, France 24, February 17, 2021].

Darmanin is of Algerian, Armenian, and Maltese extraction, which might be one reason he isnât so enamored of young people who look like dâEscufon openly discussing âidentity.â Macronâs government is probably also worried about polls showing Marine Le Penâs National Rally too close for comfort in next yearâs election.

Darmanin offers two reasons for the ban that is to take effect on Wednesday: âHate Speechâ and âconstitution of a militia,â a ridiculous claim that suggests GI is violent. It isnât. Indeed, the young activists havenât even bothered refuting the second charge because itâs so ridiculous. The group does not offer military training and, except for boxing lessons to teach self-defenseâa response to rising Leftist and âyouthâ violenceâit does not advocate using force.

And the âhate speechâ? Well, GI opposes the Islamification of France. With the victims of Islamic terror at 263 since 2012, a number that does not include the victims of the ordinary crimes now endemic in some âdiverse neighborhoods,â Darmanin should be worried, but not about the identitarians. 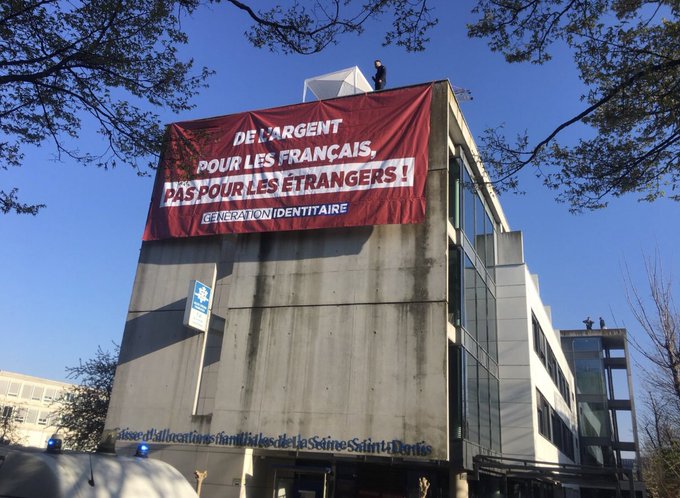 Darmanin has banned some religious extremist groups, but mostly to signal that he is acting to curb the Islamic violence. The fact is, âfar rightâ violence in France is a myth, a Big Lie to excuse Darmaninâs totalitarian crackdown. (Sound familiar?)

Indeed, Darmaninâs indictment lists not a single act of violence, but instead cites GIâs agit-prop stunts which are not too far from Greenpeaceâs own coup dâÃ©clats. Those stunts are effectiveâwhich is of course why the government wants to silence the group.

The first was the occupation of the construction site of Poitiersâs mosque on October 20, 2012. The activists unfurled huge banners demanding a referendum on the building of new mosques and commemorating the Battle of Poitiers (Tours) of 732 when Charles Martel defeated the invading Umayyad. Of course, the media collapsed in hysterics with headlines like this: French far-right group storms site of new mosque [France24, October 21, 2012].

In the years since, GI has continued to stage high-profile actions: 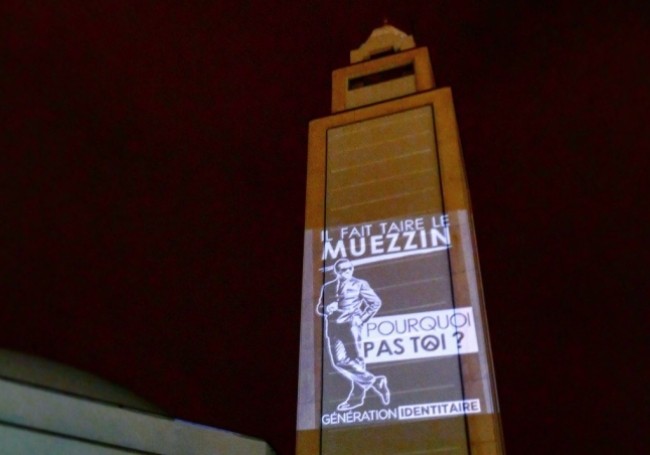 But the biggest success of Generation Identity has been âDefend Europe,â a campaign to raise awareness of illegal immigration.

In August 2017, the group rented a boat to go patrol the Mediterranean Sea, calling the authorities when they saw a human smuggling vessel [A far-right group chartered a boat to repel migrants on the Mediterranean. Then part of its crew filed for asylum, by Michael Birnbaum, The Washington Post , July 27, 2017].

Less than a year later, the young activists climbed the Alps between France and Italy to symbolically reassert the border between the two states [France seeking to ban far-right, anti-migrant group, by The Independent, February 14, 2021].

And last monthâthe last straw for Darmanin, apparentlyâthey did the same at the Col du Portillon in the Pyrenees on the Spanish and French border [France: GÃ©rald Darmanin notifies Generation Identitaire of its next dissolution, TellerReport, February 14, 2021].

Darmanin, of course, would have you believe they posed as border authorities to usurp police power, a claim the group easily refuted with video posted online.

We reject that our country keeps being submerged and murdered by this mass immigration.

The announcement of GIâs legal dissolution took everyone by surprise. Nothing legally justifies it. (On that note, itâs worth observing that Facebook and Instagram have already banned GI, just like they have with VDARE).

That aside, Franceâs parliamentary conservatives, not generally keen on groups that outflank them on the right, awoke from their usual stupor and openly denounced the move. From Jean-FrÃ©dÃ©ric Poisson of the Christian Democratic Party to Marine Le Pen of the National Rally (former National Front), they rallied behind GI.

After all, if the government can ban a group that abides by the law and has not been charged with any crimes, who might be next?

Patriots elsewhere must take heed. The repression against the Dissident Right is global:

All those actions actually acknowledge the rise of populist, nationalist feelings, and the global Deep Stateâs failure to curb it.

Whether Darmanin will retreat, or whether GIâs lawyers can rebuff the governmentâs ban on the group, is uncertain.

What is certain is that the government has unified the French right. What was meant to break the grassroots identitarian movement, which is nothing more than an immigration patriot movement, might end up attract support it otherwise would not have had.

The Historic Nationsâof France, of Austria, of America, and elsewhereâare rising. Darmanin and his global partners canât stop it, at least not as long as 2,000 young people will march to defend their homelands.

RÃ©mi Tremblay (email him) is the editor of Le Harfang and a contributor to the Council of Euro-Canadians. Heis the author of Le Canada franÃ§ais, de Jacques Cartier au gÃ©nocide tranquille. Ãric Zemmour on the Great Replacement and Civic Nationalism
Guillaume Durocher
• 221 Comments • Reply
← The âGreat Replacementâ Comes for t...
Hide 8 CommentsLeave a Comment
"France Cracks Down On Generation Identitaire, A Movement of the Patriotic Young Who Want Europe for Europeans"
• 8 Comments
Commenters to Ignore
Commenters to ignore (one per line)

← The âGreat Replacementâ Comes for t...
Current Commenter
says:
Current Date at Time Now
Leave a Reply - Comments on articles more than two weeks old will be judged much more strictly on quality and tone
Cancel Reply
Commenting Disabled While in Translation Mode