Brenton Sanderson began writing for The Occidental Observer and The Occidental Quarterly in 2011. I have been an enthusiastic supporter of his work from the beginning â his first essays were on the âWar on White Australiaâ which I am happy to learn will be coming out in a separate, much anticipated, volume.

As an editor, one quickly learns to appreciate essays that are well-researched and well-written, and Sandersonâs work has always been up to the highest standard. Each of these essays is a gem. The general theme of Battle Lines is the difficult question of Jewish influence â difficult at least partly because the literature is littered with apologetic writings, so that getting a firm grasp on such a topic requires great persistence and honesty. As he writes in the Introduction, âThe Jewish Question is foundational to the demographic transformation of the West, the revolution in its sexual and ethical mores, and to the trajectory of Western politics, art and culture.â We canât avoid talking about it if we want to be honest about what is happening. But doing so is a thankless task, a reason for being scorned and ostracized, fired from oneâs job, barred from influential positions in the media and academic world. Sanderson quotes Richard Wagner writing in the nineteenth century, âIt is distressing to me always to come back to the theme of the Jews. But one cannot escape it if one looks to the future.â

And 150 years after Wagnerâs statement, it is still absolutely true. We simply canât avoid discussing the Jews. Honest discussions of Jewish influence are absolutely necessary if White people are going to have a future.

Much of Sandersonâs work has been on Jewish influence on culture, particularly in the arts and the media. These are major contributions. Beginning in the early twentieth century Jews have had enormous influence on the visual arts as artists, critics, dealers, and collectors. In 1973 Sophy Burnham published The Art Crowd, estimating that 80 per cent of the 2,500 core âart market personnelâ â dealers, curators, gallery owners, collectors, critics, consultants and patrons of the arts â were Jewish.[1]Sophy Burnham, The Art Crowd (Philadelphia: David McKay Publications, 1973), 25.

So itâs not surprising that Jewish attitudes would be reflected in what counts as fine art and whose work gets promoted. As Sanderson notes in his essay on Tristan Tzara and the Dada movement, there was a âJewish intellectual substructure of many of these twentieth century art movementsâ¦ manifest in their unfailing hostility toward the political, cultural and religious traditions of Europe and European-derived societies.â

Given this reality, it is not difficult to envision Jewish critics championing Jewish artists or non-Jews like Jackson Pollock whose work can be seen as advancing this hostility toward the culture of the West. Nor is it difficult to imagine Jewish art dealers promoting such artists (e.g., Sidney Janis promoting Mark Rothko [Chapter 9] whose fame had nothing to do with any recognizable talent but was inextricably linked to his being a member of a Jewish sub-culture). The same goes for Jewish art museum curators (e.g., Katherine Kuh promoting Rothko), Jewish collectors (e.g., Charles Saatchi promoting Damien Hirst), and Jewish critics (Clement Greenberg promoting Jackson Pollock).

Gustav Mahler and Leonard Bernstein were doubtless very talented musicians and composers. However, their elevation to the status of cultural icons cannot be explained by talent alone. Once again Sanderson documents a coterie of Jews promoting these figures, including Bernstein promoting Mahler. Bernstein in particular has always fascinated me because of his flamboyant personality and style. Sanderson notes that his fame rivaled that of Elvis Presley or Marilyn Monroe. Even I, who was not particularly drawn to classical music at the time, was quite aware of him and recall being struck by his impassioned performances as a conductor. The issue of Jewish personality is relatively unexplored, but it seems that Jews often have extreme personalities â personalities that make people stand out in whatever their field of endeavor, with Bernstein being a prime example. In my first book on Jews, A People That Shall Dwell Alone, I summarized data indicating that, on average, Jews rated highly on all the personality systems.

And while Jews have been able to promote certain individuals to the status of cultural icon, they have also attempted to tear down others, Richard Wagner being the most prominent example. In the case of Wagner, his towering musical genius presents a major obstacle in this endeavor, but there can be little doubt that there has been a campaign against Wagner waged by Jewish music critics and producers. Sanderson provides an amazing quote from Bernstein, ââI hate Wagner, but I hate him on my kneesâ â a grudging acknowledgement of the scale of German composerâs achievement.â Despite his prodigious talent, Wagner is now routinely labeled a âdeeply pathological personalityâ â a common description by Jews eagerly seeking out any flaw in a person they dislike for deeper reasons. The result has been that performances of Wagnerian works like The Ring âin the modern era have invariably sought to satirize the drama to subvert the message Wagner attempts to convey.â If they canât ban him outright because the music is too powerful, they can nip at the edges with satire and false messaging.

Another aspect of Jewish influence on culture has been the sexual revolution. In writing The Culture of Critique I always thought of the chapter on Freud as pivotal for understanding what had happened since the 1960s. Freudâs war on sexual and family mores has had vastly more devastating effects on people at the lower end of the IQ distribution than the solidly middle class or upper class. Those at the lower end of the IQ distribution benefit more from the social supports embedded in religion and traditional culture, but these have essentially been destroyed since the 1960s. Since then, all the markers of family function have declined precipitously, including increases in divorce, lower rates of marriage, births out of wedlock, and single parenting â all of which are linked to negative effects on children and all more common in people of lower socioeconomic status. In recent decades this has been exacerbated by drug abuse, especially opioid abuse, which is again more common among people on the lower rungs of society.

Here Sanderson emphasizes how the ongoing sexual revolution, originated by a vastly disproportionate number of Jewish intellectuals, has filtered into the entertainment industry, focusing on the work of Jenji Kohan (Orange is the New Black) and Jill Soloway (Transparent). When I was growing up in the 1950s, religious and patriotic groups exercised significant power over the content of movies and television. Marriage and having children were generally depicted as rewarding life choices, and all the psychological research indicates that traditional married families are indeed more likely to result in well-adjusted children.

However, such families are a vanishing breed in the Western media landscape, replaced by shows presenting divorced families, single parenting, and homosexual and transgender relationships as normal and fulfilling. Both Kohan and Soloway are strongly identified Jews (Kohan wanted to become a rabbi and Soloway said that Jews in Hollywood are ârecreating culture to defend ourselves post-Holocaustâ). Their careers have taken place completely within a Jewish milieu â a good indication of the fundamentally Jewish nature of the entertainment industry. A non-Jew wishing to have a career in the industry could not possibly produce, write, or direct anything that offends Jewish sensibilities.

Another important theme in Battle Lines is Jewish apologia for the crimes of communism, a topic that must remain suppressed âregardless of how many historians (Jewish and non-Jewish) confirm the decisive role Jews played in providing the ideological basis for, and the establishment, governance and administration of, the former communist dictatorships of Central and Eastern Europe.â Daniel Goldhagen is typical of those Jews who want to totally suppress this history, asserting that any linking of Jews with communism is a âcalumny.â However, Sanderson provides extensive reviews of two books by Jewish authors with a different slant â that yes, Jews were decisive, but whatever they did was justified by anti-Semitism. For example, the much-exaggerated pogroms of the late nineteenth century are used to justify the murder of millions and the oppressive police states, and Jews are absolved from any role in triggering the anti-Jewish attitudes widely felt by the peoples of Eastern and Central Europe. This is outright falsification of history. And as Sanderson notes,

Free discussion of the Jewish role in communist crimes undermines Jewish pretensions to moral authority grounded in their self-designated status as historyâs preeminent victims. In contemporary academia there are, in addition, strong personal and professional disincentives for highlighting the Jewish role in communist crimes, and it is, therefore, not surprising that non-Jewish historians and intellectuals are equally reluctant to recognize the Jewish backgrounds of many revolutionaries and to explore how their Jewish identity influenced their beliefs and actions. The Jewish-controlled media organs in the U.S. have conditioned most Americans to suffer a sort of mental allergic reaction to topics sensitive to Jews. 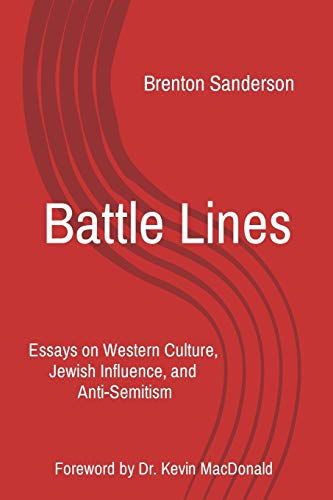 This is an excellent general description of all topics related to Jewish influence. Jews are ethnically motivated to see themselves in a positive light, while non-Jews rightly fear their careers in academia, the media, or politics will be jeopardized if they honestly and openly discuss the impact of Jews on Western societies. The result is a plethora of glaring omissions, and disingenuous analyses often accompanied by a maudlin philo-Semitism.

The reasons White academics or journalists produce this drivel are easy to understand. Such endeavors are massively incentivized, whether by obtaining tenure in the university system or getting a position in the elite media or politics. The message from our latter-day commissars is clear: âSell out and weâll make you a star.â Brenton Sanderson has not sold out. These essays offer excellent scholarship, clear writing, and most of all, honesty â a rare trait indeed in the contemporary West.