Understand the Empire: Towards Global Governance or the Uprising of Nations?
Alain Soral
KontreKulture, 2021

Here is an adapted version of my foreword to the book.

It is impossible to overstate Alain Soralâs importance in Franceâs intellectual landscape for the last twenty years. Arguably, there are two kinds of French people today: those who think that âSoral a raisonâ (âSoral is rightâ) most of the time, and those who believe what they hear on television.

Attacked in 2016 by then-French Prime Minister Manuel Valls as âpublic enemy number twoâ â just behind humorist DieudonnÃ© â, Soral has become a reference for all those who have grasped the deceptive, evil nature of what he calls âthe Empireâ. Even his enemies recognize his importance as a thought-leader. This was most recently illustrated in June 2021, when Left-wing party leader Jean-Luc MÃ©lenchon predicted that a terror attack might strike France just before the next presidential election, similar to those attributed to Mohammed Merah in southwestern France in March 2012: âThis is all written in advance,â he said. He was immediately accused of âthinking like Alain Soral.â If you hint as such things as the âdeep stateâ or âfalse flagâ attacks, you will be accused of being influenced by Soral, and the whole system will quickly line up against you.

I began watching Soralâs videos in 2013, soon after being red-pilled about the 9/11 attacks and starting to suspect that there was something of a Zionist nature behind it all. Soralâs videos, and later the books issued by his publishing house, KontreKulture, introduced me to the âJewish question.â They also educated me regarding the social question, not to mention the gender question (I found Soralâs critique of feminism very enlightening, both from a sociological and a deep-political viewpoint). For nearly ten years, Soral has been like a truth-compass for me. Many of the things that I have since reflected upon, studied, and written about, were first introduced to me by Soral.

Soral speaks to the masses. He is not an academic scholar writing abstruse texts with lots of footnotes. He is more an artist of the spoken word, comparable to a poet â if poets can be said to be truth-speakers in their own way â with a keen understanding of human nature that allows him to decipher the historical and social dynamics shaping our world. He has a genius for making complex issues understandable by all.

Since its publication in French in 2011, Understand the Empire has served as a sort of manifesto for Soralâs political vision. It has sold some 120,000 copies to date, while his videos routinely reach even wider audiences, some of them garnering millions of views. After being translated into Russian, Korean, and Spanish, it is now available in an excellent English translation, enriched with endnotes to clarify some references for non-French readers. 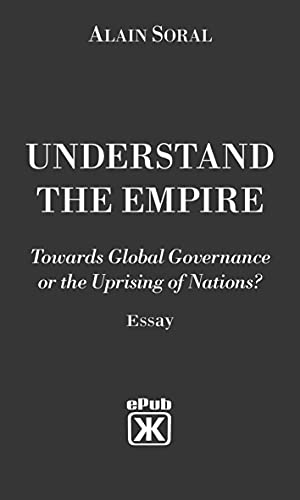 Critics will say that this book is full of shortcuts. I say it is a shortcut in itself. Soralâs talent is to boil down complex historical, political, or cultural phenomena into a few paragraphs. For example, he can explain in a couple of pages how the modern banking system became âan enterprise of racketeering and dispossessionâ that âgradually [came] to own all wealth without ever producing it.â

Soralâs writing is both dense and precise, but often humorous as well, such as when he writes about the Holocaust religion and points out that âthe gas chamber has replaced the (missing) body of Christ.â

Ten years after its publication, Understand the Empire has proven to be prophetic in many ways. In one such case, Soral saw how the Western world was already moving toward âglobal governance in the name of public health under the diktat of the World Health Organization (WHO),â and that the globalists would exploit pandemics as âanother phony construct that will allow the global oligarchy to terrorize entire populations and subjugate them to authoritarian policies: mandatory vaccination under the supervision of armed forces, assembly bans, and so on â all useful measures in times of crisis and whenever popular uprising becomes too great a risk.â

This book contains only a small sample of Soralâs vast corpus of incisive thought, which is constantly moving swiftly in all directions and has grown significantly since this book was originally published in French. This is illustrated by the publication earlier this year of a new book by him, Comprendre lâÃpoque: Pourquoi lâÃgalitÃ©?, an enquiry into the philosophical origins of todayâs Western democratic ideology.

Like everyone, Soral has âles dÃ©fauts de ses qualitÃ©s.â Thatâs what I usually say to those who point out his rough edges. But in fact, the Jungian way of looking at it is perhaps not the most accurate one. Rather, Soral behaves as men should in times of war, when good manners must sometimes be sacrificed for victory. He does not forgive betrayal, cowardliness, or selfish opportunism. Some resent Soral for wanting to be a leader. So what? Those who say we donât need leaders are simply not ready to fight, or have their own agenda. Soralâs position of leadership is well-deserved.

In times of war, we need heroes, not saints. Heroes are eccentric. And can you have a genius without some âgrain de folieâ? Do you ask a prophet to be soft-spoken? I see what Soral has done for France; I see the hundreds of thousands of people he has educated and emancipated; and I see the persecution he has endured for more than a decade because of it. If imitating Christ means confronting Jewish power with the truth and being crucified for it, then I cannot think of a better Christian than him. And if Truth is God, as Gandhi thoughtâand thatâs my own creed, tooâthen Soral is a very God-centered man.

PS: You can watch a few videos of Soral with English subs on https://odysee.com/@ERTV-International:9?order=new Subscribe to All Laurent GuyÃ©not Comments via RSS
Personal Classics

Israel as One Man: A Theory of Jewish Power
Laurent GuyÃ©not
• 248 Comments • Reply