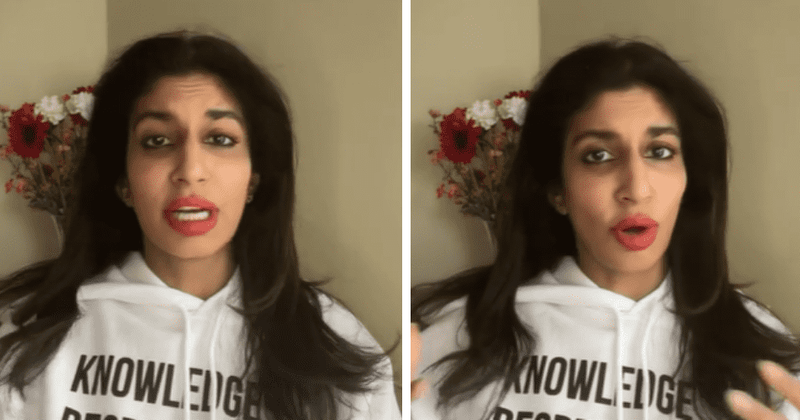 As I noted in Individualism and the Western Liberal Tradition, explicit expressions of anti-White hate are one of the most important of the psychological mechanisms that will wake White people up to identify as White and have a sense of White interests (section titled âExpressions of Anti-White Hatred Promote White Ethnocentrism, here). Recently it has come out that a psychiatrist of Pakistani background expressed visceral hatred toward White people in a lecture titled, appropriately enough, âThe Psychopathic Problem of the White Mind.â Youâve probably read about it, but itâs important to emphasize these things. Get used to it. They are part of the culture now, and emanating from very high places.

The lecture was not held at a local BLM event, but at Yale University and attendees could use it for course creditâit would âfulfill the licensure requirement set forth by the State of Connecticut.â Some of her statements:

This is the cost of talking to white people at all. The cost of your own life, as they suck you dry. There are no good apples out there. White people make my blood boil. â¦

I had fantasies of unloading a revolver into the head of any white person that got in my way, burying their body and wiping my bloody hands as I walked away relatively guiltless with a bounce in my step. Like I did the world a f***ing favor. â¦

We are asking a demented, violent predator who thinks that they are a saint or a superhero to accept responsibility.

It ainât gonna happen. They have five holes in their brain. Itâs like banging your head against a brick wall. Itâs just, like, sort of not a good idea.

Yale did absolutely nothing about her talk until mainstream conservatives started talking about it. Hereâs Tucker Carlson from last night (~40â²).

Whatever you think about Tucker, itâs good that he is publicizing this. Exactly the sort of thing that Whites need to hear repeatedly. And in the story on the border disaster, he made it clear once again that itâs all about Democrats getting a permanent majority.

Notice her statement: âWe are asking a demented, violent predator who thinks that they are a saint or a superhero to accept responsibility.â Here she is doubtless thinking about virtue-signaling White liberals who think they are saviors to POC. Maybe some liberals will start to rethink their fantasy of a harmonious multicultural future and start thinking about how their children and grandchildren are going to be treated when they try to get into a good university or apply for a job.

In fact, in a later interview, Khilanani said she thinks conservatives are âpsychologically healthier.â âThey are more in touch with their anger and negative feelings. They can articulate it. They can say it, theyâre not covering it up or like âOh my god, Iâm amazing, I love all people.â Thereâs not all this liberal fluff of goodness.â

Obviously she is steeped in Critical Race Theory which is especially targeting White liberals for not being self-hating enough. Andrew Joyceâs review of Robin DiAngeloâs White Fragility:

By far the most entertaining chapter of the book comes within the last 50 pages. Titled âWhite Womenâs Tears,â itâs an indictment of that infamous sight â bawling, wailing, and normally overweight White women clutching themselves in feverish grief over the death of some poor Black gangbanger who just happened to get shot while rushing a police officer. DiAngelo is probably correct in asserting that this is a self-indulgent demonstrative act designed to heighten status (âIâm moral, good, and empatheticâ) and get attention from men of all races (âIâm vulnerable right now, and need attention and resourcesâ). Some of the anecdotes in this regard, from DiAngeloâs âWhitenessâ seminars are priceless, normally involving some weak-minded woman breaking down at the revelation sheâs âracist,â and they went some way to compensating me for the purchase price and hideous ideology of the book. Above all, they confirmed to me that what we see unfold before us is both tragedy and farce, and that our situation is no less dangerous for that

Liberals need to know that their expressions of moral superiority will not appease the White haters.

Yale did nothing to distance itself from her talk until conservatives started publicizing it. âWhen Herzog asked about Yaleâs response when Khilanani submitted her talk and materials, she said there was none.â And in the immediate aftermath, there was nothing but praise: âDr. Khilanani noted that her lecture had initially been well received. After she gave it, several attendees praised her comments on the online feed. One woman who identified herself as a Yale psychologist called it âabsolutely brilliant.â A man said, âI feel very shook in a good way,â and a Black woman thanked Dr. Khilanani for giving âvoice to us as people of color and what we go through all the time.â

Yale is now busy distancing itself from the talk, but it is still available to students and presumably still counts for the licensure requirement. Khilanani is now saying that she was speaking in metaphors: âMy speaking metaphorically about my own anger was a method for people to reflect on negative feelings. To normalize negative feelings. Because if you donât, it will turn into a violent action.â

Somehow I donât think thatâs quite enough to change the impact of these statements on White people. And I notice that she conceals her attitudes from White people in her daily life, so it clearly affects her behavior. âShe does not talk to white people about these issues in private, which is really easy if you forcibly segregate yourself from your previous white âfriends. This is how I talk with other people of color, this is how I talk with my black friends, this is how I talk with my Asian friends. This is how we talk about youâ (speaking with a Jewish interviewer, Katie Herzog)âwhich is likely what set off Bari Weiss, the ultra-Zionist who first reported on the talk.

Jews have been a necessary condition for creating multicultural America, but being thought of as part of the oppressive White elite is definitely not what they had in mind. But I doubt there is much concern about such events among most Jews given that the organized Jewish community is well connected to all the other non-White activist organizations.

Itâs no surprise that Khilanani is a textbook example of the influence of the Frankfurt Schoolâs Critical Theory, the forerunner of Critical Race Theory. From Herzogâs interview as posted by Bari Weiss:

My masters is in humanities and the focus is largely on critical theory. I donât know if youâre familiar with the University of Chicago, but it was very critical theory-heavy when I went. I did pre-med stuff in undergrad and had always been thinking of these issues. I also majored in English Lit and wondered about other ways of thinking. And I was interested in the unconscious for a long time, so it wasnât that big of a jump for me.

So she was very attracted to psychoanalysis, which was also very useful to the Frankfurt School because it didnât bother with messy things like getting good data or being falsifiable.

Critical theory is about how you are positioned in the world. Ever since I was a little kid, since Iâve interacted with people who are white, and especially white women, I would notice that things were really off. So what Iâve done by going through psychoanalytic training, which is all about getting in touch with the unconscious, is literally work backwards. Iâm like, âOk, Iâve noticed that white people tend to put me in certain roles. White women will experience me this way, white men will experience me this way.â Iâm going to use psychoanalysis to work backwards and treat all of this as a projection to see what I can learn about their mind.

Donât get me wrong. I think Khilanani hated White people from a very early age, and she would find some way to express it. Itâs just that these Jewish intellectual movements allowed her to frame it in an academically respectable way. So she could be invited to give a talk at Yale.