Queen Elizabeth II is dead. When I heard the news, I didnât join the laments of the leftist media or wish a long and happy reign to her successor. No, I thought about a sharp contrast between her final days and the final days of many of her most loyal and loving subjects. The Queen died with calm and dignity at the extreme end of her natural span. But many other old women in her capital city didnât get the chance to die like that. Instead, they died prematurely in physical pain and mental anguish, because their lives had been shattered by a Black gerontophile rapist called Delroy Easton Grant.

Gerontophilia, or sexual attraction to the old, is much more common among Black rapists. But you never hear that hate-fact mentioned or discussed in the leftist media. The true number of Grantâs elderly victims will never be known, but it was certainly more than a hundred. Something else is certain too: Grant was able to migrate from Jamaica and commit his horrific crimes in Britain thanks to the treachery of the Queen and other members of the hostile elite. The same is true of the Muslim rape-gangs now hard at work throughout the country. In short, Elizabeth II was a traitor to her realm, her people and her religion. Now sheâs dead and her traitorous son Charles III will continue her poisonous legacy.

A cross between Wonder Woman and Marie Curie

If you want proof of how treacherous the Queen was and how bad she was for Britain, just look at the reaction of the leftist media to her death. If leftists love you, youâre bad for Britain. Itâs a simple rule but itâs very reliable. And you could see its truth reinforced over and over again during the flood of positive coverage received by the late Queen in the leftist media. The BBC portrayed her as one of historyâs greats, bestriding the world like a cross between Wonder Woman and Marie Curie. In fact, she was an ordinary woman of mediocre intellect who, appropriately enough, had a simple role in play in British public life.

But Iâll admit that she played that role to perfection. And what was her role? It was that of judas-goat. Farmers have long used a friendly and reassuring goat to lead potentially suspicious and reluctant sheep into the slaughterhouse. By the time the trusting sheep realize that the goat isnât their friend after all, itâs too late. They are about to have their throats slit. Queen Elizabeth played the same role for the ordinary Whites of Britain on behalf of the hostile elite. She was the reassuring figurehead who projected a false air of continuity and calm as mass immigration and minority-worship destroyed the old White Christian Britain and turned Whites into a minority in their own capital city. When the patriotic Enoch Powell spoke out against the evils of non-White immigration in 1968, he instantly became the most popular politician in the country.

âMost of the country wanted repatriationâ

He was focussing a majority sentiment that had been obvious ever since the first shipload of non-White migrants arrived on the Windrush in 1948. As the traitorous Labour politician Roy Hattersley has openly admitted: âin 1964 â¦ a clear majority of my constituents, and most of the country, undoubtedly wanted â¦ the repatriation of all Commonwealth [i.e., non-White] immigrants.â But Enoch Powell was just a commoner. Once heâd made his speech, it was easy for the hostile elite to demonize him and drive him to the margins of public life, despite the huge support he enjoyed among ordinary Whites. If the Queen had spoken out on behalf of the people whom she had sworn at her coronation to defend, it would have been very different. The hostile elite could not have silenced the Queen or driven her to the margins. Her White subjects would have rallied to her, thrown out the traitors and created a new government to carry out the popular will. Humane and inexpensive repatriation would have been easy for the relatively small number of non-White migrants present on British soil in those days. Britain would have remained a peaceful and prosperous White Christian nation.

As we all know, that didnât happen. The Queen did not speak out on behalf of the White Britons she had sworn to defend and serve. But she did speak out loud and clear on behalf of other groups whom she did care about and was very eager to serve. The British libertarian Sean Gabb has noted that âIn 1979, she bullied Margaret Thatcher to go back on her election promise not to hand Rhodesia over to a bunch of black Marxists. In 1987, she bullied Margaret Thatcher again to give in to calls for sanctions against South Africa.â Gabbâs damning article is called âElizabeth the Useless: Sixty Years a Rubber Stamp.â I think itâs excellent, but I think Gabb should admit that his own libertarianism has been useless too. And I donât think he went far enough in his condemnation of the then-living Queen. She was worse than useless: she was actively malign. She wasnât Elizabeth the Useless; she was Elizabeth the Evil. Her interventions on behalf of Black Marxists in Rhodesia and South Africa prove that she was on the side of barbarism and chaos, not on the side of Western civilization and her supposedly beloved Christianity.

âWe Jews will remember the Queen with loveâ

In fact, her Christianity was as fake as her coronation oaths. If sheâd been a true Christian, Jews in Britain would have cursed and vilified her as they have always cursed and vilified Jesus Christ, her supposed Lord and Savior. But Jews didnât curse her. Instead, they loudly celebrated her life. Here are some of the headlines that appeared in the Jewish Chronicle, bidding a fond farewell to the traitor Elizabeth II and extending a warm welcome to the traitor Charles III: 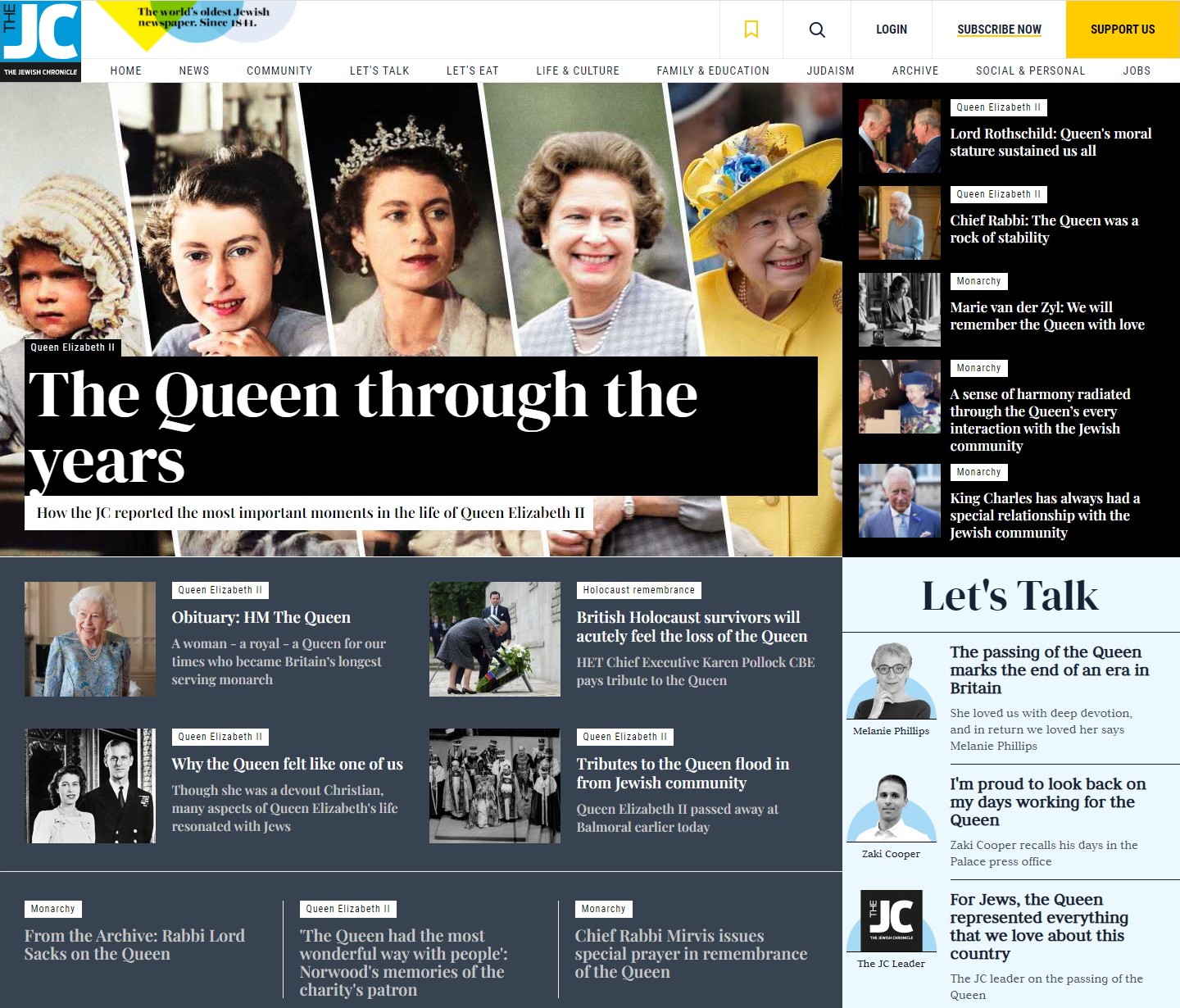 The love and respect felt by the Jewish elite for the traitor Elizabeth was no doubt sincere. She did everything they wanted throughout her reign. On the one hand, she never challenged their power. On the other, she cooperated wholeheartedly with their anti-White and anti-Christian agenda. But there are two very obvious falsehoods in the headlines at the Jewish Chronicle. The first is the claim that the Queen was a âdevout Christian.â A devout Christian places divine truth and personal service to God above life itself. Therefore, a devout Christian does not work for followers of the false, anti-Christian religion of Judaism and does not accept mass immigration by followers of the false, anti-Christian religion of Islam. But the Queen was a tireless shabbos-shiksa for Jews and did accept Muslim immigration, just as she accepted the rapes, murders and countless other crimes committed against her White subjects by non-White invaders. She was a dedicated traitor, not a devout Christian.

Destroying the West to defend the Jews

The second obvious falsehood among the headlines is the claim that the Queen was a ârock of stability.â According to the Jewish Chronicle, âminorities are most secure when the country at large is stable.â This isnât true and Jews donât in fact behave as though it is true. Nations secure stability by enforcing racial and religious homogeneity â that is, by excluding or expelling minorities and in particular by expelling trouble-making and predatory Jews. European nations have expelled Jews many times down the millennia â for example, England under Edward I in 1290, Spain under Isabel and Ferdinand in 1492. Thatâs why Jews have worked so assiduously to destabilize the West by working to destroy its White Christian homogeneity. When Jews donât stand out as a minority, their predation and parasitism are much harder to recognize and repel. Barbara Roche, the Jewish immigration minister under Tony Blair, was at the heart of New Labourâs traitorous and underhand plot to ârub the rightâs nose in diversityâ by opening our borders to the Third World. And Roche has explicitly stated that she âentered politics â she still emphasises this today â to combat anti-semitism and xenophobia in general.â

Welcoming a war on Whites

And so, when the Jewish Chronicle praises the Queen as a ârock of stability,â it is really praising her as a judas-goat. She maintained the faÃ§ade of stability and continuity while the hostile elite flooded her kingdom with the non-White footsoldiers of a war on Whites. Non-Whites are already fighting hard in enriched towns like Rotherham, where Muslims are waging rape-jihad on the White majority not merely with the complicity but the active assistance of the Labour party and other leftists. The Queen surely heard again and again about the Muslim rape-gangs that operate in so many English towns and cities. In response, she did what she always did during her long and traitorous reign: nothing. At least, she always did nothing when she had a chance to defend Whites and Christianity. As Sean Gabb noted, she became very active when she had a chance to defend Blacks and Marxism. Queen Elizabeth II was not a great monarch or a devout Christian: she was a traitor to her kingdom and a servant not of Christ but of Satan. 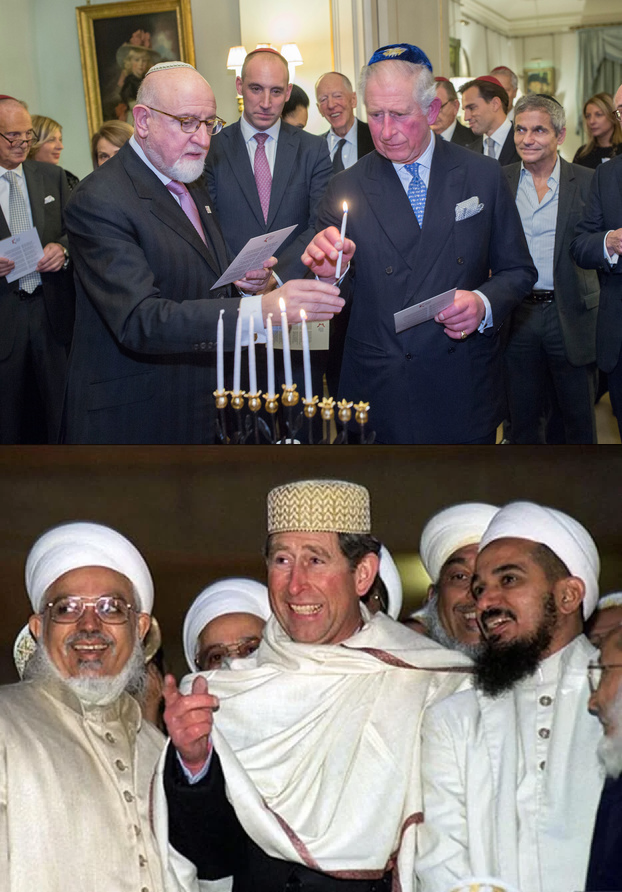 Chuck the Cuck expresses his love of Englandâs enemies.

The same is true of her son Charles III, the new king and the new traitor. Chuck the Cuck deserves to meet the same fate as his royal namesake of the seventeenth century, but with two big differences. In 1649 Charles I was executed unjustly and to the rejoicing of the Jews, who saw his death â and may even have engineered it â as revenge on the English monarchy for their well-merited expulsion under Edward I. If Charles III is ever executed, it will not be unjust and the Jews will not rejoice. Instead, theyâll lament the loss of a warm friend to Jews and a dedicated traitor to Whites, just as they are now lamenting the loss of his traitorous and Jew-loving mother. Libtards Wail, Muslims Wait: Why Fans of Abortion Wonât Defeat Fans of Muhammad
Tobias Langdon
• 24 Comments • Reply
← David as Goliath: the Contradictory Com...The Wickedness of Whiteness →
Hide 225 CommentsLeave a Comment
"Elizabeth the Evil: A Malign Monarch Dies and Is Succeeded by Chuck the Cuck"
• 225 Comments
Commenters to Ignore
Commenters to ignore (one per line)