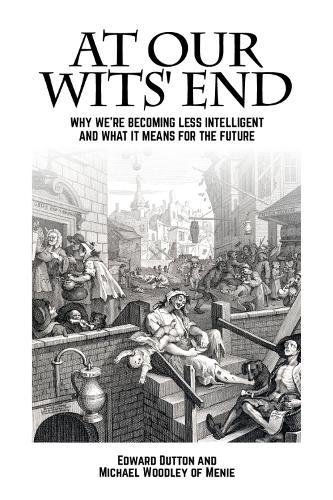 Itâs possible to derive some comfort from contemplating the Chinese. Sure, unless something radical is done, Western civilization is going to collapse due to the most intelligent women having the fewest children and massive IQ (and highly fertile) immigration from the Third World [See At Our Witsâ End: Why Weâre Becoming Less Intelligent and What It Means for the Future, By Edward Dutton and Michael Woodley of Menie] but surely civilization will be preserved by the Chinese. Unfortunately, research is showing that this is just wishful thinking.

Thus the leading IQ researcher Professor Richard Lynn actually proclaimed in his book Dysgenics that Chinaâs one child policyâintroduced in 1979 and abolished in 2015âwas the saviour of civilization. The strongly cultural desire in China for a boy and the abortion of female fetuses, meant that by the late-1990s, young males massively out-numbered females in China, showed Lynn. The females would naturally be attracted to the wealthiest and most educated males, as these males would be able to provide the optimum lifestyle for them and, anyway, females tend to sexually select for status because doing so, under evolutionary conditions, ensured the survival of their offspring [Women marry up, By Edward Dutton, In T. Shackleford, & V. Shackleford-Weeks,Encyclopaedia of Evolutionary Psychological Science, Springer, 2018]. The inevitable result, argued Lynn: less intelligent Chinese men would fail to breed, as intelligence robustly predicts wealth and status and is about 80% genetic. In addition, the ability to pay the fines for breaking the One-Child law would allow the wealthy, and thus more intelligent, to have more than one child. As such, concluded Lynn China must have âeugenic fertilityâ and it is to China that the âtorch of civilizationâ will pass. [Richard Lynn: âEugenics and Dysgenics: A Promise Deniedâ, YouTube, at 42 minutes]

Unfortunately, this is not what research by a young Chinese psychologist has found. In a study published in 2016 in the leading journal Intelligence, Mingrui Wang presented some shockingâand counter-intuitiveâfindings. Even despite the one child policy, there is dysgenic fertility in China. [Evidence of Dysgenic Fertility in China, by Mingrui Wang et al, Intelligence, July-August 2016]

The Chinese researcher and his team explored the relationship between intelligence, education-level and fertility, using a large sample from the China Family Panel dataset, which is highly representative of the Chinese population. They found that among the cohort born between 1951 and 1970, the correlation between general intelligence and fertility was -0.1, very similar to that found in Western countries.

In other words, though the Chinese have an average IQ of 105 according to Richard Lynn, and despite their introduction of the One-Child policy, they are suffering precisely the same process as the West. The most intelligent females are not selecting for the most intelligent Chinese males or, indeed, any males. As in the West, they are dedicating themselves to their education and then their careers, meaning they are simply failing to pass on their genes at all.

In addition, the strong cultural tradition in Chinaâespecially in the low IQ countryside – of desiring sons rather than daughters, leading to selective abortion, is dual-edged. The more intelligent Chinese, living in the cities, are more likely to content themselves with having a daughter. And the more intelligent she is, the more likely she is to have no children, leading to the elimination of her (intelligent) parentsâ genes. It is possible that this phenomenon could even be sufficiently strong to undermine any indirect benefits to IQ which may have been wrought by the one child policy.

Slightly less intelligent women are spending all of their twenties dedicated to their careers, only have children in their thirties and not having very many. The least intelligent Chinese womenâtoo low in IQ and impulsive to use contraceptionâare, it would seem, having excess children even despite the fines and the risk of heavy-handed Communist Party officials (illegally) trying to compel them to have abortions []. Perhaps their husbands see the fines as a price worth paying if it ensures that they get a son.

In addition, the one child policy never even applied to Chinaâs non-Han ethnic minorities. These groups are overwhelmingly rural-dwelling and they have lower IQ than the Han. The more Han a Chinese region is then the smarter it is [Differences in intelligence across the 31 regions of China and their economic and demographic correlates, By Richard Lynn & Helen Cheng, Intelligence, 2013]. For example, the average IQ of Tibetans in 92 [I Q and Mathematics Ability of Tibetans and Han Chinese, By Richard Lynn, Mankind Quarterly], meaning their IQ is almost 15 points lower than that of the Han, similar to that of Greece or Romania. [Intelligence: A Unifying Construct for the Social Sciences, By Richard Lynn and Tatu Vanhanen, Ulster Institute for Social Research, 2012]

This decline is made all the more perilous due to research, led by a Japanese psychologist called Kenya Kura, which has shown that Northeast Asians are genetically less intellectually creative than Europeans. [Why do Northeast Asians Win So Few Nobel Prizes?, By Kenya Kura et al., Comprehensive Psychology, 4: 2015] Northeast Asians, compared to Europeans, have higher gene frequencies of polymorphisms which make people collectivist, socially anxious, and fearful of anything novel. Kura and his team argue that this is adaptation to a particular ecology, where it is vital to stay in a tightly-bonded group.

However, they note that scientific innovators tend to combine very high IQ with an optimally low level of collectivism, low social anxiety and low fearfulness of the new. In other words, they have high âOpenness-Intellec tâ, as psychologists term this trait. This psychological profile means that they can think outside the box and donât care about the offence to vested interests which their new idea will almost certainly result in.

This is why, maintains Kura, it is the West that generated the Industrial Revolution, rather than more intelligent Northeast Asians. The West is indeed the Goldilocks Zone for genius.

âThe torch of civilizationâ may well pass to China, but it will continue to get dimmer and dimmer and very little new fuel will be added to it. The torchâs bearer will slide into an increasingly authoritarian dictatorshipâas happens to relatively low IQ societiesâand the light of civilization will go out, unless it can somehow be passed to a society that is still under eugenic fertility. Nigerians, Jews and Scrabble: An Update on the IQ Debate
Chanda Chisala
• 434 Comments • Reply
← Why Is Intelligence Declining? Our Rule...The Tide Is Turning Against "Gender Stu... →
All Comments Hidden • Show  797 Comments • Reply
PastClassics