When nationwide race riots broke out over the death of George Floyd Leftist Main Stream Media operatives brought up the August 2017 Charlottesville Unite The Right rally in an attempt to smear President Trump:

Donât recall the president responding this way to the white nationalists who came to Charlottesville from across the country and helped turn a peaceful anti-racism rally violent. In fact, he called some of them âvery fine people.â pic.twitter.com/1XIrpseeZw

(Eugene Scott is a black political reporter for the Washington Post who reports on “the politics of identity in the Trump era”).

My initial reaction, as one of the organizers of the Unite The Right Rally: there is simply NO COMPARISON between how badly white activists were treated at our event compared to the kid glove treatment of these black rioters today. And, at the most obvious level, this is clearly true. In Charlottesville, we had to win a hard-fought victory in federal court even to have the right to demonstrate in the first place. Then the Democrat-controlled city government conspired to sabotage the event. Police stood down and allowed Black Lives Matter and Antifa carte blanche to attack UTR demonstrators so that an âunlawful assemblyâ could be declared.

The national MSM, the FBI, the U.S. Department of Justice and local law enforcement have essentially ignored these acts of brutal violence against the UTR participants, apparently because they were done for the ârighteous causeâ of âanti-racismâ. 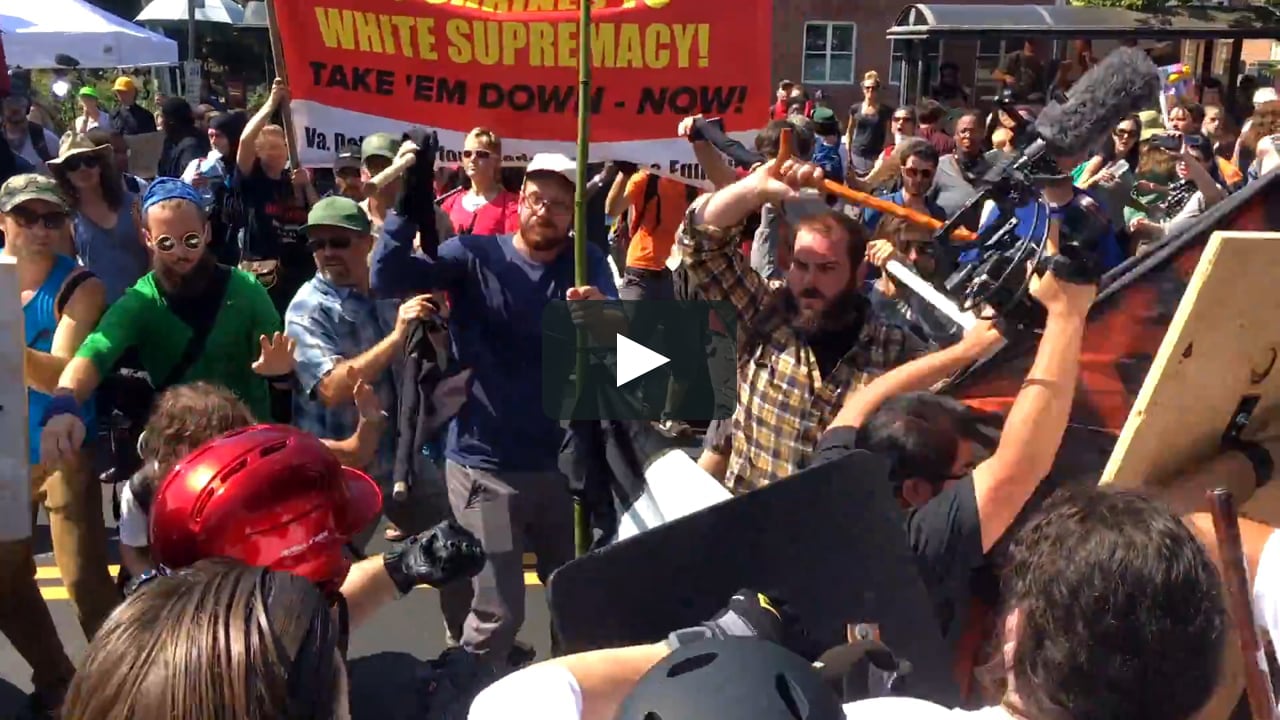 And this has led directly to the violence the George Floyd rioters now feel free to unleash on ordinary Americans now.

So, on second thoughtsâ¦I think there indeed is a parallel between Charlottesville in 2017 and these latest riots. We are looking at the same groups and ideologies that, with the aid of black street criminals, wreaked havoc on a legally-approved demonstration in Charlottesville, now upscaling their Anarchist and Black nationalist tactics to a nationwide campaign of terror.

Law enforcement authorities have had three years to put a stop to these groupsâ activities. But they have instead allowed them to metastasize and build the infrastructure they needed to capitalize on the George Floyd riots and turn them into a national insurrection.

The names of nearly all the violent Antifa from Charlottesville, including convicted domestic terrorists like Brent Betterly, pictured below in the red helmet [3 in Chicago Face Charges of Terrorism in Protests, By Idalmy Carrera and Steven Yaccino, The New York Times, May 19, 2012] were identified by internet sleuth âJack Corbinâ and brought to the attention of the DOJ. 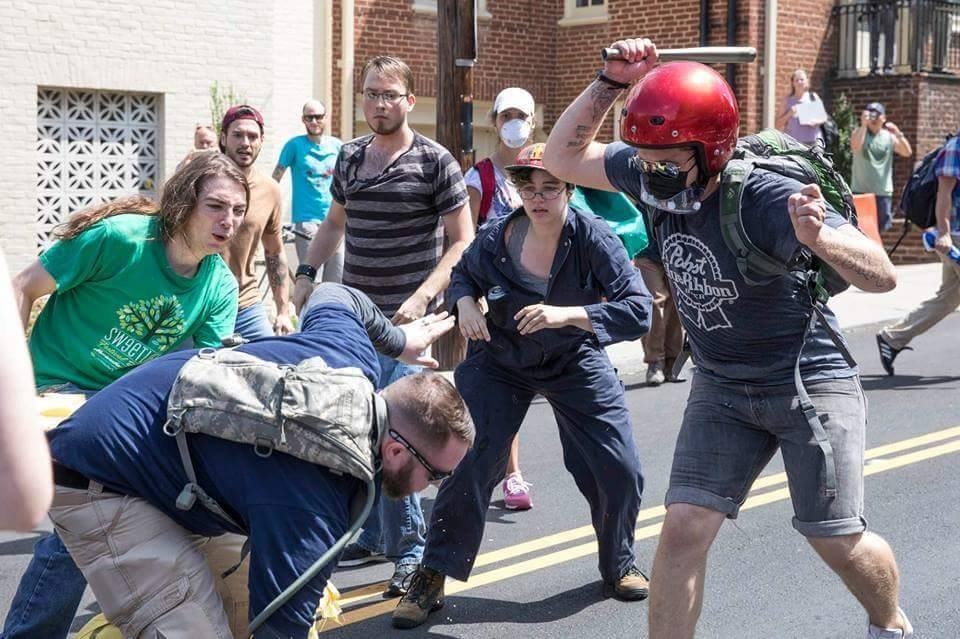 The FBI responded by arresting Corbin for internet harassment against one of the violent âprotestersâ [Florida man accused of cyberstalking, making racist threats against black activist, by Michael Kunzelman, ABC 7 News, September 19, 2019]. He is now in jail.

Does anyone remember flame thrower attacker Corey Long who used a spray can and a lighter to shoot flames into a crowd of protesters? He was given a slap on the wristâ20 days in prisonâand lionized as a folk hero by anti-white media. [Interview: How Corey Long Fought White Supremacy With Fire, Yesha Callahan, The Root, August 14, 2017.

Well, this was the scene outside the White House on Saturday night.

Besides that, a number of videos have begun emerging of âprotestersâ attacking vehicles so that drivers are forced into a tragic life-or-death choice.

Similarly, there were multiple attacks on private cars during the Charlottesville chaos.

Everyone in the country knows Heather Heyerâs name. She has been lauded as a martyr and the civil liberties of millions of right-wing dissidents have been infringed in retaliation for her unfortunate demise.

But as tragic as her death may be, she was only one woman.

What about the victims of the George Floyd riots murdered by Antifa and Black Lives Matter extremists?

If all you did was watch MSM disinformation you might not even know that they exist, much less their names. 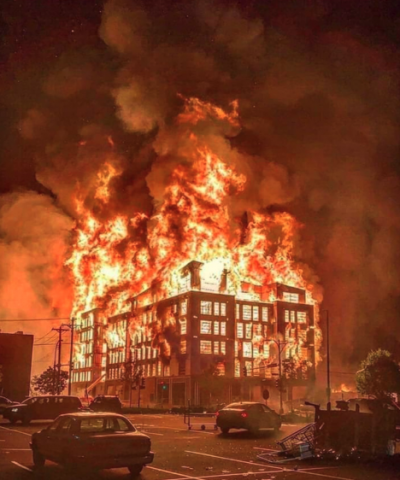 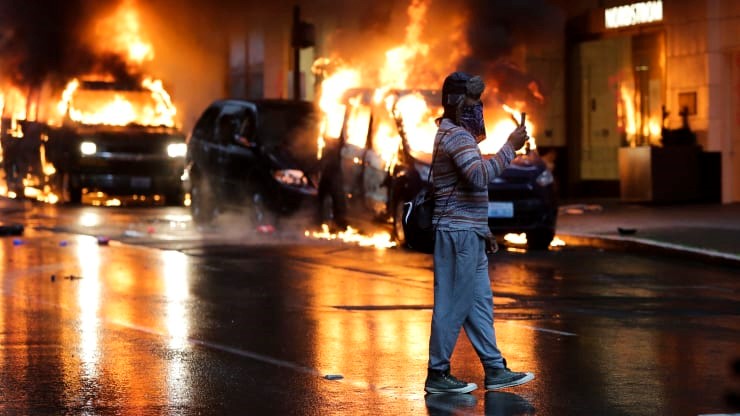 Iâll leave the list of victims here for now, but I want to note that there may be many more related to the rioting that we just arenât able to confirm at this time.

The point is that Heyerâs death was used to stoke a moral panic about the boogieman of âwhite supremacyâ which has led to an unprecedented, un-American wave of political censorship against right-wing political dissidents and immigration patriots.

Meanwhile these victims of anarcho-tyranny will remain forgotten and nameless by our corrupt Ruling Class.

After several days of Black Lives Matte- inspired looting and pillaging, the rioters were joined by anarcho-terrorists (or Antifa) who added the same kind of mob beatings and rampant vandalism they deployed from the 2016 inauguration riots in Washington DC to Charlottesville in 2017.

Despite the clear and unmistakable identity of the perpetrators, many of charlatans responsible for the Charlottesville hoax have now begun spreading the conspiracy theory that the riots are actually the work of âwhite supremacistsâ–an idea so crazy even the SPLC doesn’t believe it.[No Evidence White Supremacists Are Derailing The Protests, Left-Wing SPLC Says, by Chris White, Daily Caller, June 1, 2020]

Thus former Charlottesville Vice-Mayor Wes Bellamy: âLetâs be very very clear: officials in Minnesotaâ those responsible for last nightâs arrestsâare saying it is white nationalists who are co-opting the protests.

NOT, as Bill Barr said, Antifa or âfar-leftâ radicals.”

ââ> RT @ECMcLaughlin: Letâs be very very clear: officials in Minnesotaâ those responsible for last nightâs arrestsâ are saying it is white nationalists who are co-opting the protests.

NOT, as Bill Barr said, Antifa or âfar-leftâ radicals. https://t.co/M8uOqAFhCl

âWhile Iâm certainly okay with protests and looting, Iâm also aware that there are white agitators at these protests doing a lot of the worst property damage.â

ââ> RT @Lexual__: While Iâm certainly okay with protests and looting, Iâm also aware that there are white agitators at these protests doing a lot of the worst property damage. Theyâll go home and wonât be the ones targeted or derided as thugs âdestroying their own communitiesâ

Then thereâs Amy Spitalnick, the Executive Director of Integrity First for America, a \$10 million slush fund financing a lawsuit targeting attendees of the Charlottesville rally (including me). This group has capitalized on misinformation and fearmongering to raise money and obtain favorable media coverage.

Spitalnick is now promoting the conspiracy theory that far right âboogaloo extremistsâ are to blame for âco-optingâ the protests and turning them violent. As evidence, she merely retweets a photo of a young militia member wearing a âboogalooâ patch. He is neither taking part in the protests nor committing any acts of violence. This blood libel appears based only on the fact that the young man happens to be white.

This guy is wearing a boogaloo patch front and center. Boogaloo extremists are committed to a second civil war, and are among the extremists seemingly trying to coopt these protests. 

No reporter should be quoting this guy without that basic context. Come on. https://t.co/2RFoJVAccy

All BLM-Antifa rioters have a similar agenda of vandalizing American historyâand politicians seem only too happy to look the other way. In Richmond on Saturday, rioters burned the Daughters of the Confederacy building incinerating a priceless General Stonewall Jackson flag and many manuscripts. 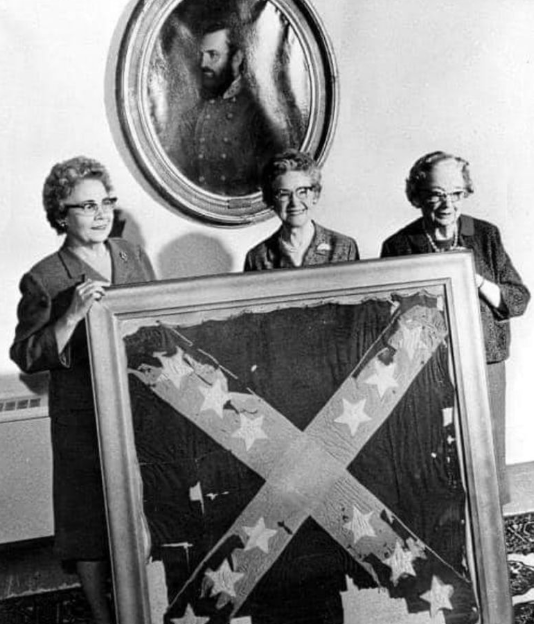 Vandals sprayed graffiti on several of Richmondâs Confederate monuments and hung a noose around a statue of Confederate President Jefferson Davis.

On Sunday night vandals set fire to the historic St. Johnâs Church in Washington DC, attended by ever American president since James Madison. It is (was?) a priceless national landmark.

Trump visited this church, accompanied by the Secret Service, today.

One thing that these mobs indisputably have in common: their hatred for white Americans and our history. If they have it their way, every statue of our ancestors will topple and our legacy burned to ash.

Jason Kessler [Email him] is a civil rights advocate and freelance journalist. He is presently suing the City of Charlottesville for violating the First Amendment rights of the Unite The Right demonstrators. He can be found on Twitter and at his website JasonKessler.us.