A remarkable thing is happening in Charlottesville. Although the Unite the Right rally happened over a year and a half ago, Charlottesville is where the organized, militant left and its establishment backers intend to crush popular resistance to their near total control of American political discourse. If they succeed, public free speech–speech that challenges prevailing attitudes at any rate–will be nearly impossible. The American citizen will have been reduced to the status of a serf. Fight now, or that will be your destiny.

The hard left has been attacking its political enemies on two fronts: in the media and in the courts. In the media, they have spun a false narrative about the rally with the intent of stirring up moral outrage against the political dissenters, that is, the Alt-Right. The extreme left has succeeded in bringing about broad censorship of dissident opinions. Their narrative also justifies their second method: a campaign of lawsuits and frivolous criminal prosecutions, the purpose of which is to intimidate the Alt-Right and to drain what little resources they possess. Once the hard left has wrapped up the dissident right, they will move on to other targets.

The leftâs narrative must be comprehensively refuted. Those who attended the August 12, 2017 Charlottesville protest must launch a legal counter-offensive to stop the unfounded and harassing attacks, liberate the falsely imprisoned and send a message to all who would attack us in the future: We will fight back.

The Campaign of Lies

The media have been spinning their narrative since the beginning. Sometimes they lie outright, but their primary means has been twisting the truth. They omit and obfuscate. One of the staples of the narrative is that âviolence broke outâ or that âboth sides engaged in violence,â phrases that are meant to confuse the reader about who exactly was responsible for the violence. This allows the media to pin the blame on those who wished to attend Unite the Right rally, and to gloss over the crimes of the truly responsible: the leftist âcounter-demonstratorsâ (âAntifaâ), the police, and the civil authorities.

Letâs start with Antifa. Evidence of their guilt is overwhelming. Despite having been granted permits to protest at two separate parks in downtown Charlottesville, Antifa rallied on the street right outside Lee Park, where Unite the Right was permitted to demonstrate. They positioned themselves to block anyone else from entering and leaving the park, knowing that police would not remove or disperse them, and daring anyone to pass through their ranks. When attendees tried to pass, Antifa locked arms, screamed, attacked with fists, poles and other weapons. No brawls would have happened if they had stayed in their designated protest-zones, or if they had simply made way and limited themselves to shouting abuse from the sidelines. That would have been an appropriate way to exercise free speech.

Blocking people from attending a legally permitted rally is, it should go without saying, illegal. There is a substantial body of law regarding the âhecklerâs veto.” Antifa has regularly used this tactic. One might confuse this behavior for âcivil disobedience,â but to do so would ignore the fact that civil disobedience is directed against the authorities. When you block other citizens from a public space, you are not engaged in civil disobedience, but mob-rule. 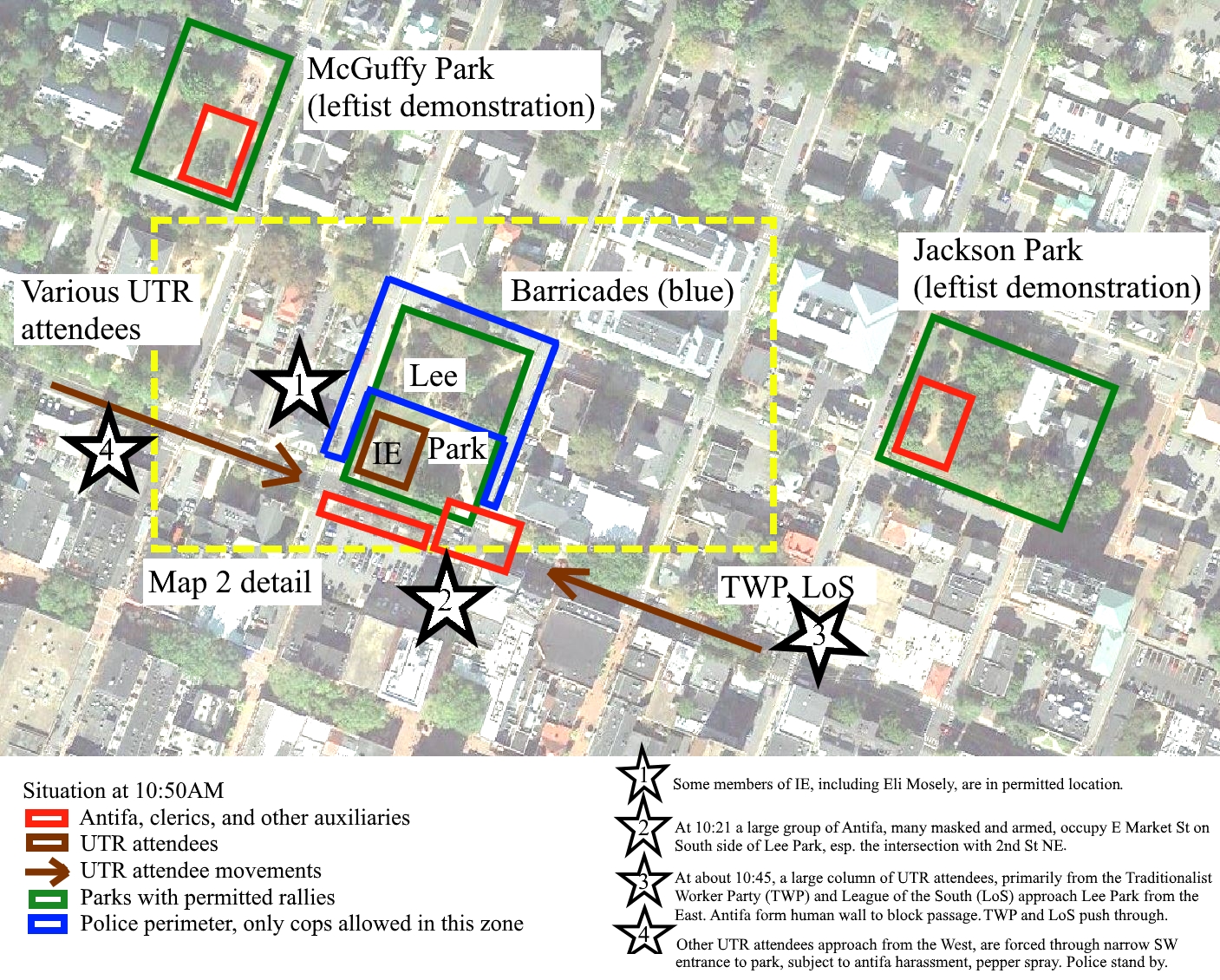 It should be noted that without Antifa, no violence occurs at Alt-Right demonstrations. The Alt-Right gathered in Charlottesville two times, once before and once after Unite the Right. Neither time did âviolence break out.â The same cannot be said of Antifa, who notoriously rioted in Washington, DC during Trumpâs inauguration, blocking check-points, burning cars, smashing windows. These patterns of behavior have been apparent in countless other incidents around the country, especially in the last two years.

After the police declared that everyone gathered in and around Lee Park was engaged in an âunlawful assembly,â the vast majority of the Alt-Right dispersed. Antifa did not. Instead, they hounded rally-goers who were trying to get back to their cars and hotel rooms. Even after a state of emergency was declared, Antifa and their auxiliaries continued parading through the streets attacking police and intimidating citizens for hours. Yet not a single one has been prosecuted.

These critical facts have been absent from virtually all mainstream media reports. The media has, as usual, presented footage of spectacular brawls, making no effort to determine how those fights began or to present anything about their context.

The media narrative has also ignored the responsibility of the police and civil authorities. However, a comprehensive, independent report found that the authorities failed spectacularly. This is nothing short of an epochal scandal. Why have so few reported on this?

The report, compiled by former US attorney Timothy Heaphy, criticized many, including the City Council, the Mayor, the Virginia State Police (VSP) and other state-level agencies. Charlottesville Police Department (CPD) came in for particular scrutiny because 1) their training, planning and rehearsals were totally lacking or inadequate, 2) they did not seek advice from other police departments (like those in DC, Berkeley or Portland) who had dealt with similar situations with Antifa, 3) they did not learn any lessons from a riot in Charlottesville one month before August 12, 2017, where Antifa blocked traffic, assaulted cops and refused to obey a dispersal order. Perhaps the most damning finding was that two witnesses claimed that a âstand-down orderâ was given. According to the report, as Antifa was attacking people trying to assemble at Lee Park, CPD Chief Thomas said, âlet them fight, it will make it easier to declare an unlawful assembly.â

But CPD is an easy target. A lot is known about their conduct because they were relatively cooperative with Heaphyâs inquiry. Other, higher organizations have refused to talk, notably the Virginia State Police, who released only one document. The Governorâs office too was reticent to respond to Heaphy. These state officials are senior to CPD and had every reason to know what was likely to happen if Antifa was given free reign. Yet they did not coordinate effectively with CPD, and in fact, it was VSP who formed the riot line that pushed dozens of protestors (including me) out of Lee Park and into Antifa, despite the fact that they had total control of other, safer means of exit.

Map 2: Unite the Right (UTR) Ambushed by Antifa and Police 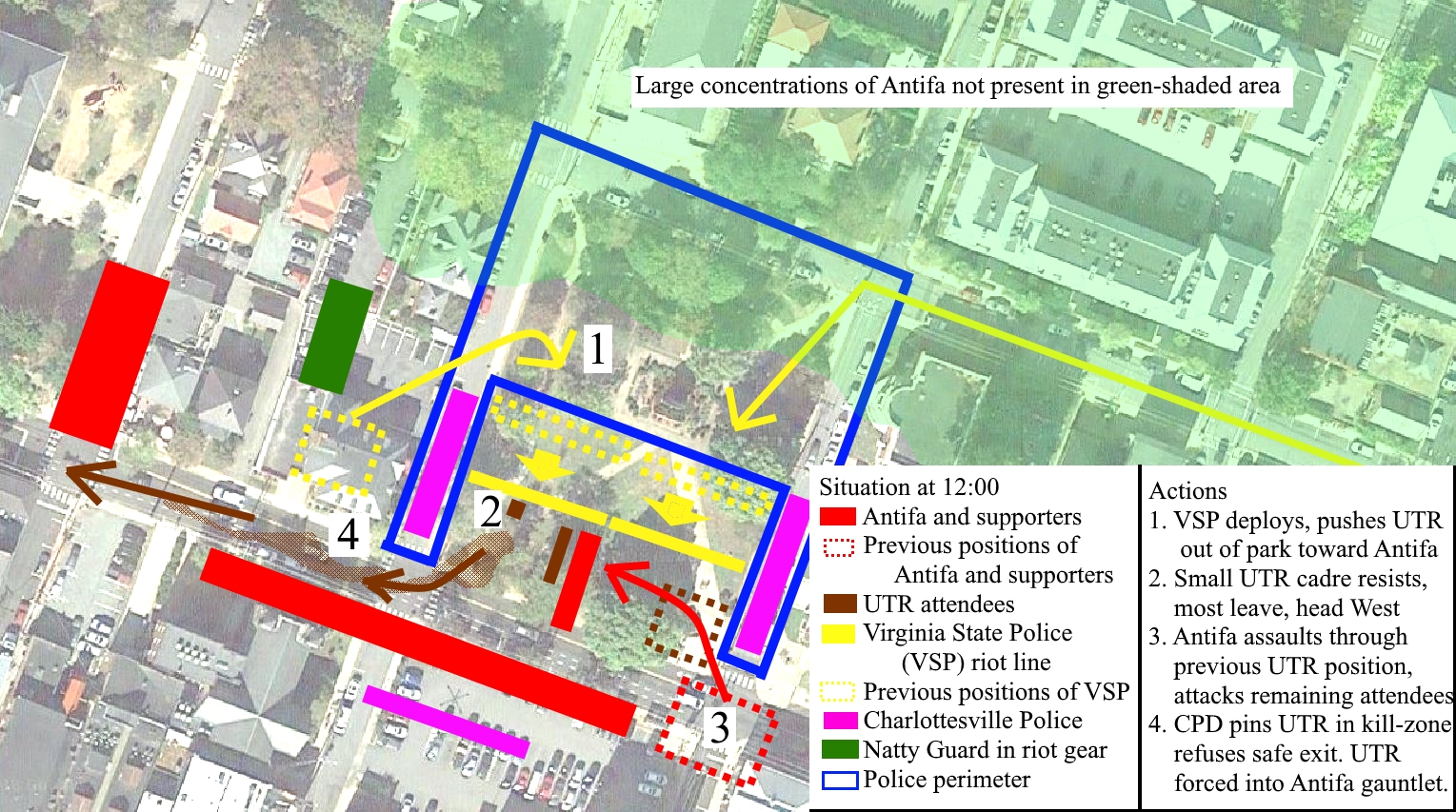 Again, the media has shown a stunning lack of interest in investigating the authorities.

But the mediaâs campaign of lies was only preparatory. The real assault on American rights has happened in the courts, where the Alt-Right has been viciously and unfairly attacked by the organized left and, worse, the authorities.

Contrast that with how Antifa has been treated. No one in Antifa or any one of their supporters has been criminally prosecuted for any of the dozens of crimes they committed, despite the profusion of evidence. Only one leftist was charged with a misdemeanor. Found guilty of assaulting Unite the Right organizer Jason Kessler in front of dozens of journalists and police officers, a Charlottesville jury fined him \$1. No official of the city or state government or the police has been investigated or tried.

The Alt-Right, on the other hand, has been subjected to a series of criminal and civil cases. James Fields, Jacob Scott Goodwin, among others have been railroaded in the courtroom and thrown into prison. It is outside the scope of this article to fully recount the cascade of outrages, but suffice it to say the cases have been gross miscarriages of justice. Another four young men were arrested by the FBI for âserial rioting.â They have been in prison for over six months, awaiting trial in June. You can imagine how that will go.

Whatâs more, two sprawling civil suits have been launched against dozens of dissident organizations and individuals. One, Sines v Kessler, claims that the rally was a cover for a secret plot to riot and attack minorities wantonly. Itâs an interesting theory, because it reflects what actually happened in Charlottesville, albeit with the aggressors and victims reversed. And, the reader might be shocked to learn, Sines v Kessler is being argued by two New York-based Jewish law firms with lots of money and political connections, Boies Schiller Flexner and the practice of the lesbian Roberta Kagan, infamous for her advocacy of âgay marriage.â Also involved is a third firm, Cooley LLP, famous for representing top Silicon Valley companies like Google and Facebook, companies that have spent the last year and a half censoring the opinions of the Alt-Right, or anyone who supports their eminently reasonable positions.

Why We Must Fight

Charlottesville has given Americans one thing of inestimable value: a demonstration of how moneyed thugs can dictate what is allowed to be said in public. The police and the authorities simply do not have the political will to enforce the law. Antifa has discovered how to avoid any consequences for their intimidation: by obscuring their identities they can riot, by pooling money and aggressive lawyering they can avoid punishment. They have turned our constitutionâs legal protections into a âget out of jail freeâ card for themselves. Would that private citizens were so privileged.

For justice to be re-established, the rules have to be applied fairly, not selectively. Police and prosecutors need to enforce the law, especially against those, like Antifa, who intentionally flout it. Charlottesville is just one instance. As mentioned above, over 230 Antifa were arrested during Trumpâs inauguration (the âJ20 Riotsâ) eight months before Charlottesville. The vast majority of them had their charges dropped and only one did any prison time. Anarchy reigned in the capital during a major civic event, attendees were terrorized, over \$100,000 in property was destroyed, millions were spent on emergency services and police (3,000 officers), millions more on prosecutions, all for one guy to do a measly 4 months in prison. It will happen again.

To fix this problem, the following measures need to be taken

Many will balk at such measures, because they are âimpracticalâ and âwill never be implemented.â They are of course right–under current conditions. The only way forward is for Americans of good conscience to show that they are willing to assert their rights. To do so, they must prove that they are willing to suffer slander and doxxing (publication of their private information, name, address, revelation of real name behind a pseudonym which can lead to being fired, etc.), and in many cases, physical attacks, frivolous lawsuits and even prison time.

But if Americans will not stand up to Antifa and their enablers in the media, the police, and the courts; if they will not fight, then they are contemptible weaklings.

Let tyranny reign, for slaves do not deserve to be free.