The US Constitution still has a purpose. While it no longer serves as the basis of our legal system, it does give lawyers plenty of mental exercise finding ways to subvert its clear intent. Free speech? Not if private monopolies censor you. Freedom of assembly? Not if a masked mob gets there first.

But the systemâs most outrageous abuse of Americansâ supposed rights have been against due process. Most white Americans do not think about this. For them the places and processes of the legal system–courtrooms, jailhouses, making bail, exhaustive and invasive searches–are elements of a good story, not the objects of their constant dread.

It is perhaps for this reason that so many have failed to notice, let alone care about, what has been going on in Charlottesville, VA. The James Fields show trial was bad enough, but that was only the beginning of the politically motivated prosecutions.

Almost ten months ago, four young men were arrested in California. The charge? â[Traveling] in interstate commerce…with the intent to incite a riotâ and âconspiracy.â The evidence? They had been identified in year-old footage as having been at the 2017 Charlottesville Unite the Right Rally. Their final sentencing is today.

Since their arrest, they have been subjected to the worst horrors of the federal âjusticeâ system. They were seized, transported across the country, arraigned and then refused bail. Over six months later, in what any reasonable person would see as a violation of habeas corpus and the sixth amendment, they were still in jail, having been repeatedly thrown into solitary confinement, with no hope that they would receive a fair trial, and, facing years in prison, they accepted plea deals.

The four men–Benjamin Daley, Thomas Gillen, Michael Miselis and Cole White–were not members of a terrorist organization, but a club called the Rise Above Movement (RAM), which was mainly concerned with bettering its members physical and moral fitness. In August 2017, they traveled from California to Virginia to attend Unite the Right, where anarchist thugs, many of them masked, screamed at them, blocked their path, and eventually attacked them. So of course, when they dared to defend themselves, they doomed themselves to prosecution. If you donât believe me, study the video (description included with YouTube link).

The RAM boysâ experience was by no means unique. Several others have been subjected to similarly unjust treatment. It bears repeating that Unite the Right–a legally permitted political demonstration–was intentionally hindered by anarchist thugs and then broken up and crushed by State Power. This is not guesswork. It is, in fact, the conclusion of a 200-page authoritative report, commissioned by the city of Charlottesville itself, and compiled by the law firm of a former US Stateâs Attorney, Timothy Heaphy, which finds that city and state authorities–whether by incompetence or intent–created a volatile and dangerous situation. 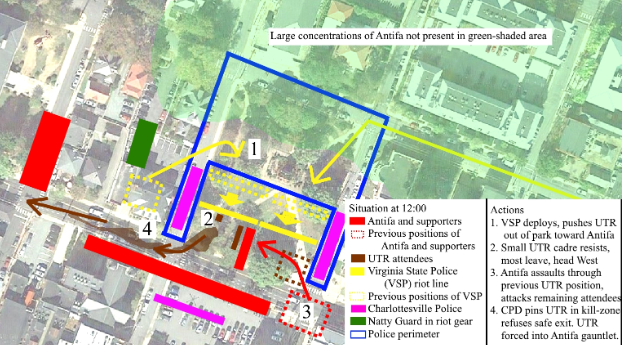 I find this recitation of facts tedious. And yet, it is necessary because the truth has been so twisted by the Jewish press like ProPublica and their lackeys in the government. Many hundreds of American citizens, mostly young men, came to voice their opposition to the extreme leftâs campaign of smashing historical icons, and, more generally, to express their dissatisfaction with the leadership of those who wield political power and cultural influence. They came to put on a legal, political demonstration. When that demonstration was illegally broken up, the RAM men left the area.

The governmentâs key piece of “evidence” against them is that they âtaped their fistsâ (Affidavit, see paragraph 15) and were thus prepared for violence, as if that proved criminal intent. âWell,â a fair-minded person would ask, âWhy would they expect there to be violence?â Preparing for violence does not mean one intends to provoke it. If that fair-minded person reflected further, these four young men had every reason–given countless instances of Antifa rioting in the months before Charlottesville–to expect that the rally would be attacked by masked anarchist thugs, and that police would fail to defend them. This expectation was proved right. The real crime of the RAM four was their political affiliation. As supporters of the Alt-Right, they have been targeted for selective justice. They were arrested specifically because the federal authorities caved to political pressure from leftist organizations. Weeks before the arrests, the Jewish-dominated ânon-profit investigative journalisticâ organization ProPublica ran a propaganda film that featured the men, resulting, as you would expect, in them being fired from their jobs, and later arrested.

If these young men had a lot of money, they could immediately sue ProPublica–a private espionage firm masquerading as a press outlet–for tortious interference and defamation. But clearly none of them or their families have the sort of resources that would allow them to put up a real fight against such a well-coordinated political inquisition. Indeed, it is unlikely that they would be able to find a lawyer–for any amount of money–who understood the political and public dimensions of their plight.

Just another day in the Weimar Republic of America, right? Not quite. Their case is peculiar for another reason. The ProPublica âdocumentaryâ that uncovered the menâs identities relied on information from an Antifa blog, which in turn was cited in the Fedsâ indictment. Not just cited, mind you. The federal investigator copy-pasted whole paragraphs of irrelevant Marxian whining into the official document. 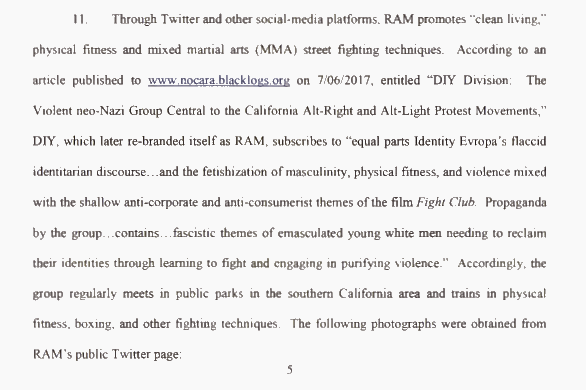 Not that this is very surprising. It has become a regular practice for prosecutors to make the most outlandish claims and to pursue the most outrageous charges, in hopes of securing a plea or a settlement on something, in order to overcome our legal systemâs default assumption of innocence. They treat due process as if it were a used-car negotiation. Like everything else in our political order, good faith and fair play have given way to Talmudism. Bully a man for long enough with terrorist charges and lock him up with MS-13 gang-bangers, and you are sure to extract a plea.
Support Russia Insider – Go Ad-Free!
So, predictably, the RAM four have all pleaded out. And who could blame them? Every man has his limits, and they proved that they have far more endurance than most. Daley, Gillen and Miselis in particular are to be commended for refusing to make a deal with corrupt prosecutors for as long as they did. Even that submission was not enough for federal prosecutors, who added âhate crimesâ charges after the plea deals were signed. Those charges could add months on to their sentences. We will see what happens today in court.

But all of this brings us to the bigger question: At this point, what ethical obligation has any American to follow the law? If he cooperates with its agents, he should know that his good faith and intentions will be used against him, without fail and without regret. If he adheres to its tenets, he can be sure that he weakens his own position in economic and social competition against those who are less inhibited than he. If he demands that its judges apply it to those who, with the indulgence of the political elite, flout its spirit and torture its letter, he can be certain that such insolence will be punished, by official or unofficial means. If, pushed to the last extreme, deprived of all state protection, he dares exert his rights by force, no amount of justification, no show of restraint, no appeal to sympathy or sanity will suffice to save him.

No. I might go so far as to say, that he should not let himself be bound by the unjust rule-system of his enemies. It would be more noble for him to undercut the law at every turn, to ridicule its enforcers and hold them in contempt. Well advised would be the man, who, having been dragged into court to answer some ridiculous, Jewish accusation, would say nothing, provide nothing, only throw back even more extreme counter-accusations, at both his accusers and at those who pretend to judge him. For the law is no longer the code by which honest disputes may be regulated and criminal elements repressed, but the plaything of a vicious and hostile elite, who have no end but the preservation of their own unjust power and unearned privileges. And only by selective enforcement can they prevent the rise of those who are their moral superiors.