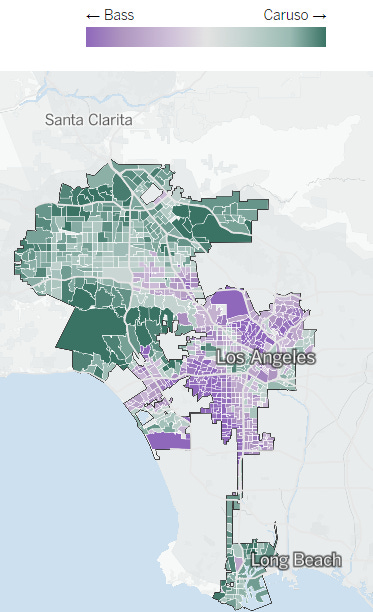 Karen Bass defeated Rick Caruso, by a margin of 53.1% to 46.9%, to become LAâs next mayor. Looking at the election results map, Bassâ strongholds were “gentrifying” Hipster areas like Highland Park and Echo Park, and historically Black neighborhoods, such as Crenshaw/Leimert Park.â The gentrifying areas for Bass, fits with my observation from the vote on the affirmative action measure, that gentrifiers are the most woke. Carusoâs electoral strengths were among the middle class in the San Fernando Valley and San Pedro, affluent areas, and certain working class Hispanic areas. For instance I recently noticed many Caruso for mayor signs in the Valley and Pacific Palisades. The more family oriented affluent areas and single family home areas, especially went for Caruso, while more dense and urban areas went for Bass. Obviously Carusoâs policies on education and public safety were more pro-family, and the leftâs policies have increasingly made cities inhospitable for families.

The outlier wealthy areas that voted for Bass were the Hollywood Hills and Venice. Also many areas with young professional apartment dwellers, went for Bass. Among Hispanic areas, it is notable that Caruso did well in Westlake and Pico-Union, which have many recent Central American immigrants, who tend to be poorer and staunchly Democrat, besides more middle class, suburban, Mexican Americans. Caruso also did relatively well in the northeast San Fernando Valley, which is also low income and heavily Hispanic. The mayoral primary vote roughly matched the general election, though Kevin DeLeon did well in both Latino and Hipster areas. Overall Whites and Asians favored Caruso, Latinos were close to split between Caruso and Bass, while Blacks overwhelming favored Bass. 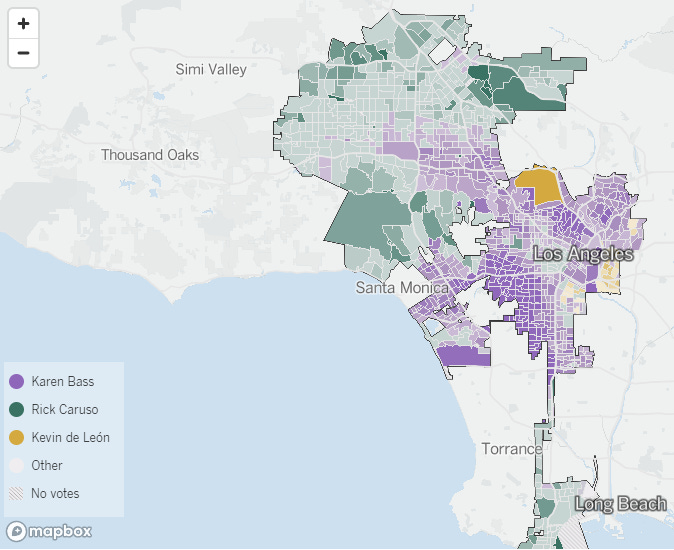 As an LA native, I would have voted for Caruso as the obvious choice. Caruso is not necessarily dissident or anti-establishment, far from it, but is rather a pro-business neoliberal centrist type, who is likely not crazy about either Trump or Bernie Sandersâ movements. If elected, Caruso might have been comparable to Michael Bloomberg as New York City mayor. The strongest case for Caruso was that he could have slowed down LAâs decline and urban decay, by taking care of the basics. 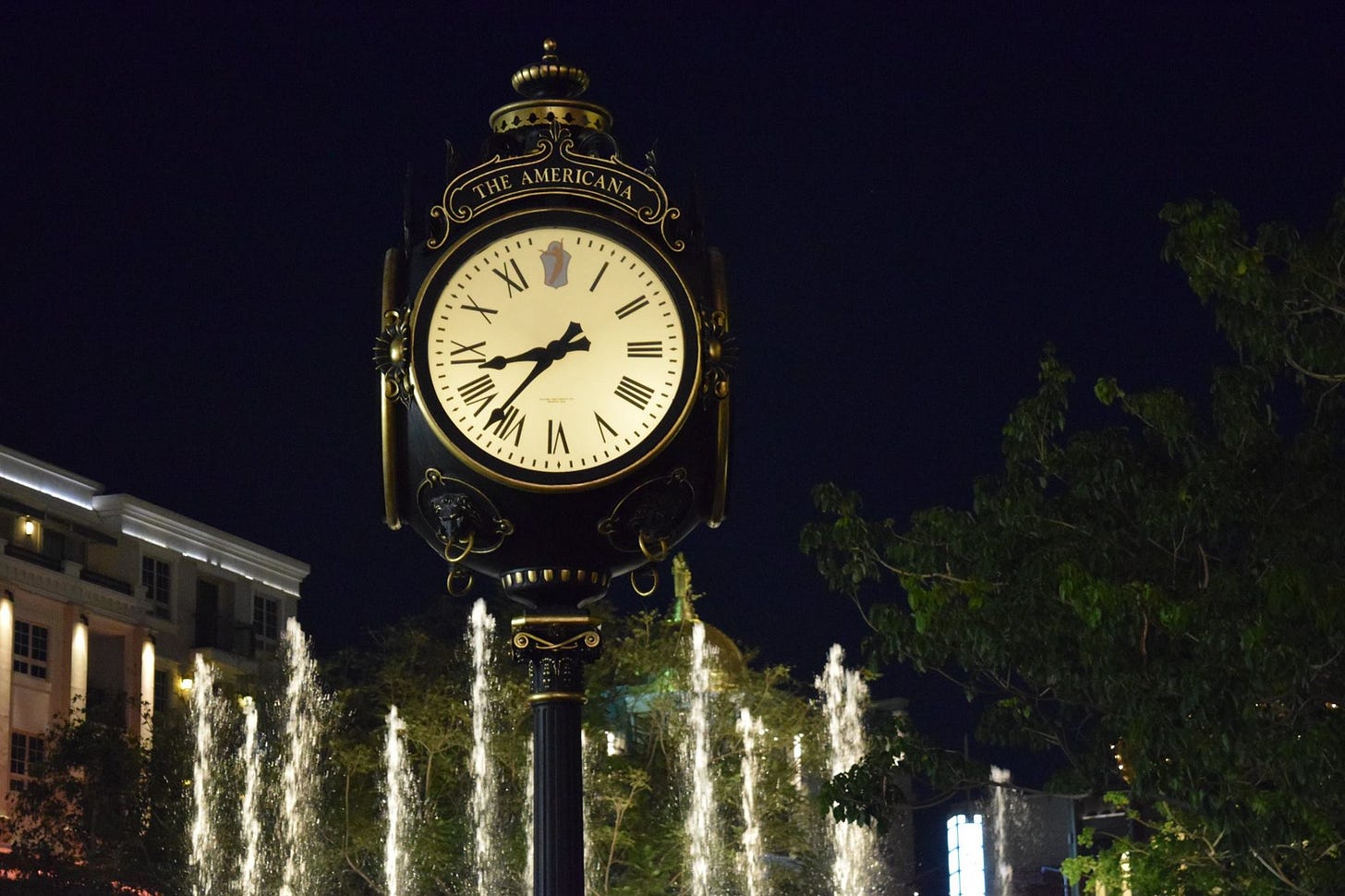 Carusoâs strength was as a builder, with the implicit message of turning LA into the Grove. Though the Grove and Carusoâs other projects are often viewed as gaudy and faux, I generally take the stance that anything that creates walkable spaces is a net positive, especially somewhere as auto-centric as LA. Both candidates had nuanced positions on housing politics, and were neither totally YIMBY or NIMBY. Caruso was for building high-rises along commercial corridors, but was also for protecting single family home neighborhoods from up-zoning. As a developer he has to be at least somewhat sympathetic to new construction, though YIMBYs have accused him of catering to NIMBY concerns. The left-YIMBY organization, Abundant Housing LA, endorsed Bass, though she has also made some concessions to left-NIMBYs. This is in part because, Black activists who had anti-gentrification concerns in Crenshaw/Leimart Park, were one of her core constituents. However, many left-NIMBYs viewed Bass as too pro-developer, and of selling out Leimart Park to developers. While neither candidate is significantly more YIMBY or NIMBY than the other, the main distinction between them is that Caruso opposed rent control while Bass supported it. While mayor Eric Garcetti took a kind of left-libertarian approach to the homeless, Bass has taken a more aggressive stance of proposing building lots of permanent units to house the homeless, though this could just be rhetoric. Kevin DeLeon, whose political career is over due to scandal, was initially the left-NIMBY candidate in the primary, with support from ultra-NIMBY, Michael Weinstein, of the Aids Healthcare Foundation.

LA voters approved measure ULA, known as the âmansion tax.â While on the surface the measure seems reasonable to make the ultra-wealthy pay their fair share to house the homeless, it is terrible as so far as it could stifle the development of new housing. Even some YIMBYs spoke out about its potential negative impact on new construction. Taxing mega mansions and vacancies is fine, even though the revenue would likely get wasted. However, this is not really a mansion tax, but rather will tax the sale of underutilized properties, thus disincentivizing selling those properties for redevelopment. Despite the measure passing and the recession being a setback for development, I am still overall bullish on LA urbanizing long-term.

Even though Caruso ran as a Democrat, his defeat was a sign of practically total Democrat hegemony, and another reason to be pessimistic about Californiaâs political future. However, the election results show that centrism has strong appeal among large blocks of voters, even though it may end up being more mainstream centrism rather than radical centrism. There has long been this populist narrative about California politics, of the more traditional White middle class being squeezed out by both the upper class and working class immigrants. However, it is especially notable that among upper class Whites, especially those with families, and Latino immigrants, the two groups populists traditionally viewed as their political and socio-economic threats, there is interest in some centrist alternative. Even Californiaâs populist-right media have shifted their tune to the demographic realities, as the more traditional White middle class demographic is increasingly demographically and politically irrelevant.

Also contrary to the champagne socialist stereotype, much of LAâs wealthy are more moderate on local issues, such as the affirmative action vote. Caruso garnering the endorsements from celebrities, known to be more liberal or maybe neoliberal, including Gwyneth Paltrow, George Lopez, Kim Kardashian, and Katie Perry, shows that even a lot of the Hollywood elite is more moderate than assumed, and much of woke politics is for show. It also helped that Caruso ran as a Democrat, in winning over this constituency.

Looking back at the 2005 mayoral election between Antonio Villaraigosa and incumbent James Hahn, both Bass and Carusoâs coalitions overlap with those of Villaraigosa and Hahn. LA mayoral elections show how even if all of the candidates are Democrats, the candidates cater to different demographic constituencies. For instance in the 2005 mayoral primary, Blacks voted for Bernard Parks, Latinos for Villaraigosa, middle class Whites for Hahn, and Jews for Hertzberg. I supported Walter More for mayor in 2005 and 09. Moore was an independent with populist and conservative leanings, with positions of anti-corruption, anti-illegal immigration, pro-animal welfare, and also fairly nimby. Moore had a pro-middle class populist message, with a lot of support from middle class boomers, especially in the Valley, and from local am radio.

In the 2005 runoff, Villaraigosa won over affluent Whites, young professionals/proto-Hipsters, and Latinos, while Hahn, who was more moderate, had a coalition of Blacks and remnants of moderate middle class Whites. In 2013, Eric Garcetti was elected mayor with a coalition of affluent Westside Whites and Latinos, with Blacks for his opponent Wendy Greuel, and middle class Valley voters divided. Caruso made remarkable inroads among Villaraigosaâs, Hahnâs, and Garcettiâs constituencies yet still lost, which could be a sign of how much demographics have changed, such as the exodus disproportionately impacting moderates and serving as a safety valve for discontent. However, among Bassâ core constituencies, Blacks are a declining demographic and the hipster/gentrifier population is very transient.

Despite Caruso spending over $100 Million on his campaign, Bass had the advantage of the Democratic Party machine and mail in ballots to all eligible voters, which greatly advantages Democrats. I am not even alleging voter fraud, but it is more of a critique of mass democracy, with low information voters. The elections plus the recent city council controversy about corruption and racial remarks, show the realities of tribal politics in multi-ethnic democracies. Demographic coalition building is often more important than either policy or good political leadership, even if there is discontent with incumbents. It is a clichÃ© to complain about, but bureaucracy and corruption continue to get worse and more entrenched in California and LA. While I have promoted concepts such as smart socialism and UBI, with the absolute incompetency in Californiaâs bureaucracy and overall corruption, libertarian polices are almost preferable over what exists now, which is why I tend to vote fiscally conservative on State ballot measures. American Pravda: Vaccines and the Mystery of Polio
Ron Unz
• 386 Comments • Reply
← A Rightwing Multiculturalist Approach t...White Californians as a Prototype for A... →
Hide One CommentLeave a Comment
"Caruso Goes Bust in la: A Radical-Centrist Analysis"
• One Comment
Commenters to Ignore
Commenters to ignore (one per line)

← A Rightwing Multiculturalist Approach t...White Californians as a Prototype for A... →
Current Commenter
says:
Current Date at Time Now
Leave a Reply - Comments on articles more than two weeks old will be judged much more strictly on quality and tone
Cancel Reply
Commenting Disabled While in Translation Mode