Joe Slovo with Nelson Mandela
◄►Bookmark◄❌►▲ ▼Toggle AllToC▲▼Add to LibraryRemove from Library • BShow CommentNext New CommentNext New ReplyRead More
ReplyAgree/Disagree/Etc. More... This Commenter This Thread Hide Thread Display All Comments
AgreeDisagreeThanksLOLTroll
These buttons register your public Agreement, Disagreement, Thanks, LOL, or Troll with the selected comment. They are ONLY available to recent, frequent commenters who have saved their Name+Email using the 'Remember My Information' checkbox, and may also ONLY be used three times during any eight hour period.
Email Comment Ignore Commenter Follow Commenter
Search Text Case Sensitive  Exact Words  Include Comments
List of Bookmarks

Steven Pinker (born 1954) is the Jewish academic whose scientific acumen enabled him to dismiss Kevin MacDonaldâs books without taking the trouble to read them. Well, he got that wrong, and he got something else wrong, as I saw when I read an anodyne discussion between him and Richard Dawkins from 2008. According to Pinker, reading âjust appeared too recently in human evolutionary history for it to have left its mark on the genome.â

Contra Pinker, five-and-a-half millennia are more than enough time for such a radical innovation to leave its mark on the genome. Thatâs how long, at minimum, reading and writing have been part of human culture. But some groups of human have been literate far longer than others. In parts of sub-Saharan Africa, literacy arrived only in colonial times, but in the Middle East and China selective pressure for literacy may have been at work for millennia. As Ron Unz has described, the sophisticated, literate but sink-or-swim culture of ancient China had obvious evolutionary implications. Those who did well had more children; those who didnât often starved. But doing well meant mastering the complex and finely detailed Chinese writing-systemâthose who could master it were able to move into lucrative positions in the civil servants, complete with wives, concubines, and many children. So the Chinese may well have acquired genes that improve their ability to read Chinese. 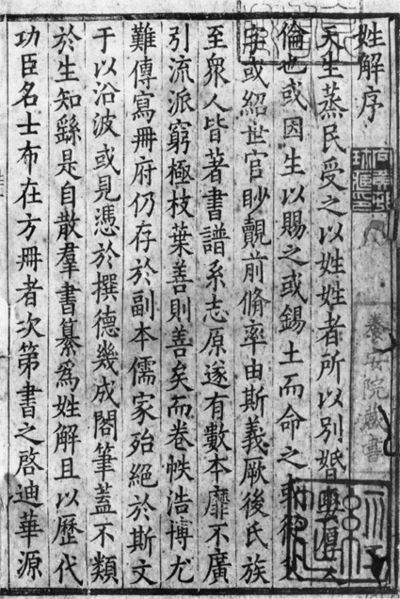 Elsewhere in the world, different writing systems may have had different selective effects and favoured different genesâsee Peter Frostâs fascinating discussion of the Visual Word Form Area (VWFA), for example. Steven Pinker may not simply be wrong about the invisibility of âreadingâ in the human genome, but multiply wrong: it may be visible in different ways in different regions. However, reading could well be invisible in the genomes of groups like Blacks, Amerindians, and Aborigines, who have not been literate long enough to experience its selective effects. Accordingly, the failure of Blacks in European societies may not only be due only to their lower average intelligence and higher average criminality, but also to their lower average literability (as we might call the ability to master reading and writing and the complex argumentation that they enable).

Itâs easy to see the unimportance of books in Black culture. Rap music celebrates rapaciousness and rape, not reading. And the recent riots by Blacks in South Africa have provided a tragicomic echo of the riots by Blacks in England in 2011. Back then, Blacks expressed their deep pain at injustice by committing murder, setting fire to buildings, and looting shoes, clothes, and shiny technology. But they left bookshops mostly untouched. Ten years on, their co-ethnics in South Africa have expressed their pain at injustice in the same way:

More than 300 people have been killed and more than 50 schools in KZN [KwaZulu-Natal] have been ransacked; thousands of shops, including big, insured, white-owned supermarkets and small, uninsured, black-owned stores, have been destroyed; pharmacies and clinics have been attacked and trucks and buses have been set on fire. The main motorway from Johannesburg to Durban is often simply closed. The damage now amounts to billions of rand. Only bookshops seem to have escaped the looters, which might tell us something. (The real reasons for South Africaâs riots, The Spectator, 31st July 2021)

It does tell us something: that books donât matter to Blacks. But books matter hugely to the group whose intellectual and ideological magic transformed the gold of White-run South Africa into the dross of Black-run South Africa. Ashkenazi Jews like Joe Slovo, Denis Goldberg and Helen Suzman were central to the heroic struggle against racism and Apartheid. They supplied the intellect and ideology for the unintelligent but charismatic Nelson Mandela and his Black comrades.

Success as a scholar

Blacks are not bookish, but Jews are famous for their devotion to books and their success as academics, journalists, and publishers. As Kevin MacDonald has noted of medieval Jewish culture in Europe: âsuccess as a scholar was valuable because it allowed the scholar to contract a desirable marriage, often to a woman from a wealthy family. At the very center of Judaism, therefore, was a set of institutions that would reliably result in eugenic processes related to intelligence and resource acquisition ability.â Even as the Jew Steven Pinker was denying that reading had left a âmark on the genome,â his own genome may have borne marks of selection for literacy. 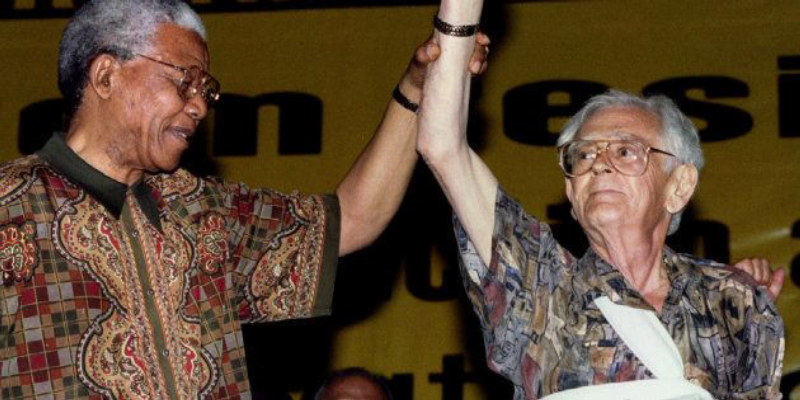 The same is true of the Ashkenazi Jews who fought with Blacks to end White rule in South Africa. And so very bookish Jews put very unbookish Blacks in charge of an advanced industrial society. The results were entirely predictable:

In 1994 the ANC [African National Congress] inherited the strongest economy in Africa, with excellent infrastructure, including cheap, reliable electricity. [In 2021] the ANC has wrecked it all. We have continual blackouts; the passenger railways are crumbling into ruin; most of the municipalities are dysfunctional, with appalling water supply and sewage running in the streets; South African Airways is bankrupt; the economy is crippled; deep poverty is widespread, and unemployment is at 43 per cent (including many who have given up looking for work). This tragedy has been caused by systematic corruption, a bloated government, ruinous racial laws and a relentless assault on private enterprise. Violent crime alarms the rich and terrifies the poor. (The real reasons for South Africaâs riots, The Spectator, 31st July 2021)

The Greek scientist, mathematician, and engineer Archimedes was one of the greatest geniuses in history and understood the huge power of levers and of limited force applied in the right way. He is reputed to have said: âGive me a place to stand and I will move the world.â But levers exist in a sociological sense too. Jews were a tiny minority in South Africa, but they used levers of ideology, rhetoric and finance to move the vast and hugely successful society of White South Africaâand drop it over a cliff.

Straight from the Hebrewâs mouth

Jews are now using the same levers to move the even vaster and more successful society of White America. And with the same intent: to drop it over a cliff. You donât have to take just my word for that. Iâm a rabid and irrational anti-Semite, after all. But you can have a similar assessment of Jewish nation-wrecking in America straight from the Hebrewâs mouth, as it were. The bookish Jew David Cole has published an article called âThe Dysgenic Duoâ at TakiMag. The duo are the same as they were in South Africa, namely, Jews and Blacks:

Thereâs a core of the Jewish American community that will never stop being ârevolutionary.â They may do it from a street corner with a bullhorn, or from the safety of a tenured professorship, or from a Hollywood studio, or from the comfort of their own home writing checks to the DNC or a Soros PAC, but itâs a trait thatâs continually passed down, generation to generation. They may not even know what theyâre ârevoltingâ against or why; but consciously understood or not, the targetâs always going to be stability, âthe system,â as best represented by white Western civilization. â¦

That core of blacks will always give that core of Jews the conduit for their revolutionary compulsions. The worst of the worst of the present-day anti-West Jews, like Soros, donât give a damn if a Chinaman is imprisoned in a U.S. jail. Or an Indian. Or even, frankly, a [beaner]. Because those groups, even with all the immigration pushed for by leftist Jews, would fundamentally change America but not sink it as an entity. Donât get me wrong â theyâd change it in a bad way. An Asianized America (an America with a British Columbia-level Asian percentage) would no longer be America. But it would function. A Hispanicized America would no longer be America. But it would function (poorly). But a black America would fail on its own because that particular group always needs someone else to do the math and grow the food and create the jobs and treat the sick. â¦

Itâs a symbiotic relationship; blacks who could never achieve that level of dominance, of importance, on their own, and Jews who channel their revolutionary desires through a hopeless people who give them permanent surrogates. The two groups donât have to like each other (and they donât), but they both profit from the relationship. (The Dysgenic Duo, TakiMag, 20th July 2021)

Cole calls the Black-Jewish alliance âsymbiotic,â from the Greek syn-, âtogether,â and bios, âlife.â But the symbiosis is causing thousands of unnecessary deaths among Blacks, as police step back from doing their jobs in Black districts and Black criminals grow ever more violent and impulsive. Black Lives Matter (BLM) is a death-cult for Blacks driven, like the ANC, by bookish Jewish brains. Working at the heart of BLM is a Jewish woman called Susan Rosenberg. 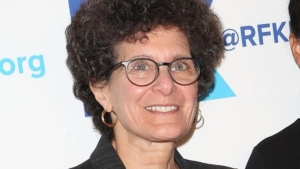 How have unintelligent Blacks done it?

Millions of Whites oppose BLM, recognize the inadequacies of Blacks, and are dismayed by the increasingly shrill and malevolent anti-Whiteness of the equity-industrial complex. But how many of those Whites have heard of Susan Rosenberg and know about the central Jewish role in anti-White ideologies like Critical Race Theory (CRT)? Not enough of them. Our role, therefore, is to educate those unaware Whites and point out an anomaly that is staring them in the face. If Blacks are so inadequate and intellectually undistinguished, how have they managed to create so much turmoil and angst in advanced Western societies? Why are the media and other institutions worshipping Blacks so fervently and making such absurd excuses for their misbehaviour? 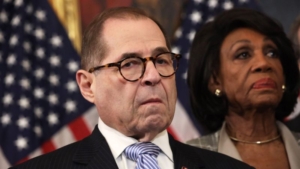 The answer is simple, as David Cole has pointed out at TakiMag. It wasnât Blacks on their own who did all that. It was much more intelligent and Machiavellian Jews. In fact, Jews have been allying with Blacks since early in the last century and were instrumental in the Civil Rights movement (CofC, 255â56). The same applies to non-Black Muslims in countries like Britain and France. They too are of low average intelligence and accomplishment, but they too benefit from minority worship and commit horrific crimes against Whites with the complicityâand even the collaborationâof the authorities. Muslims didnât achieve this cultural elevation and criminal privilege on their own. Once again Jews have been their allies. Indeed, you can find many examples of Jews explicitly proclaiming that âJews and Muslims are natural allies.â

âNatural alliesâ against whom? Against Whites, of course. Jews also see themselves as the natural allies of Blacks against Whites. That is what too many Whites presently fail to see. They might see the smaller truth about the low intelligence and high criminality of Blacks and Muslims, but they donât see the larger truth of how Jews are using Blacks and Muslims as weapons against White Western civilization. However, the more Blacks and Muslims misbehave, the more obvious the larger truth will become. And then Jews will be brought to book for the bedlam theyâve created.