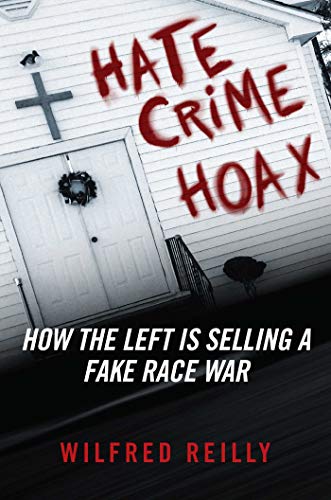 Black 17-year-old Jazmine Barnes was shot dead on December 30, 2018 in Houston, Texas. Her murder became a huge story because witnesses said the killer was a white man. In just one week, the New York Times ran a dozen stories on Jazmine Barnes. On January 7, Jazmine lost all importance and dropped out of sight when two black men were arrested for her murder.

Wilfred Reillyâs new book, Hate Crime Hoax: How the Left is Selling a Fake Race War, is all about the mania for fake white racism. It includes no fewer than 409 hate crime hoaxes the media tried to sell before abandoning them with curt corrections in the back pages. This is an excellent account of one of Americaâs most acute shortages. As Jared Taylor likes to point out, the demand for racism far exceeds the supply.

Wilfred Reilly is a light-skinned black professor of political science at Kentucky State University who had a public debate with Mr. Taylor in 2015. Taking the affirmative on the question âIs Diversity a Strength for America?â he actually said, âI donât think there will be white people in 200 years, and thatâs a good thing.â The hope that whiles amalgamate and disappear is, however, absent from Hate Crime Hoax.

Even so, Prof. Reilly understands something very important: The portrait of race relations in the mainstream media is false, and the longer the media persist in purveying lies, the more likely they are to stoke white racial consciousness. Prof. Reilly appears to want even-handed coverage of race mainly to avoid goading whites into asserting their own interests. Nevertheless, despite Prof. Reillyâs amusing capitalization practices, passages such as this are very valuable:

Of course, there is nothing âastonishingâ about the consensus on crime. The media simply refuse to report inconvenient federal statistics.

Here is another welcome observation: â[I]nterracial crime of any kind is rare, and the almost obsessive focus of many activists and media personalities on atypical incidents of white-on-Black violence certainly distracts from the fact that whites should logically be more worried about it than Blacks or other minorities.â (p. 47) The âfake race warâ of the bookâs subtitle is the laughable idea that white society and the police are waging a âwar on black males.â

Almost certainly the bloodiest race-inspired murders ever to take place in the United States were the Zebra killings, which occurred in San Francisco between October 1973 and May 1974. These murders were very explicitly racial: a group of male Black Muslims gave themselves the nom de guerre âDeath Angels,â and murdered, by several accounts, seventy-three white women and men because âthey were devils.â According to the well-known criminologist Anthony Walsh, the Death Angels killed more people than all other known serial killers operating during that year, and perhaps during the decade, put together.

The only book describing the terror seems to be Clark Howardâs excellent little Zebra, published in 1979, whose account I have been following here. It has been out of print for three decades. Had a group of Klansmen killed dozens of Black Americans in a major world city during the modern era, the level and tone of the coverage might have a wee bit different. (p. 49-50)

Why does Prof. Reilly write about these things? Because more and more white people are waking up to the deep contempt our media and rulers have for them:

As a brown-skinned American patriot, I have no sympathy for white Identitarianism. But it is important to note that the primary motivation for this new movement is not, as the activist Left seems to think, simply that all whites are evil racists at their core. Instead, it appears to be a predictable, if deeply disturbing, response to real events. Simply put, since 1960, the United States has transitioned from a 90 percent white country to a 60 percent white country. (p. 219)

Prof. Reilly sees where the rise of white consciousness could lead: âour great nation runs the risk of collapsing into a chaotic, perhaps even violent, Babel of hostile ethnic and identity groups.â He realizes that constant whining about imaginary white racism drives ever more whites towards a separatist mentality. His solution? Americans must âunderstand [that] many hate crimes are hoaxes; actively and aggressively punish individuals discovered to have faked bias crimes; stop making excuses for these criminals; and stop the flow of benefits with which we currently reward these crimes, which only feed the cynical false narrative of ethnic conflict and oppression . . . .â (p. 254)

Prof. Reilly also calls for a âmassive, intentional emphasis of our shared American identity . . . as the threat of Balkanization looms.â This is the sort of moonshine conservatives love, and Prof. Reilly can probably expect speaking engagements with National Review, American Enterprise Institute, and maybe even CPAC. Being âBlackâ means he can cite otherwise taboo crime statistics.

But it is far too late to think that roaring about âour shared American identityâ will make any difference. It was always too late. And the Left and its âmarginalizedâ pets are far too intoxicated by imaginary victimhood and the thrill of openly hating us to realize that whites will not forever submit to plunder and humiliation.

Prof. Reilly has a clear consciousness of himself as a âBlackâ person. He would be a worthy ally if he did not refuse to realize that white people also have legitimate interests and a heritage and posterity worth fighting for. He has stumbled upon one of the central lies of American race relations and hats off to him for exposing it. But his purpose is not to liberate whites but to permanently anesthetize us so thatâas he admitted in 2015âwe can eventually be bred into oblivion.