Richard Lynn, now 89, is known for his research into national and race differences in average intelligence, having relatively recently published the most comprehensive and up-to-date book available on national differences in IQ .

But although ethnic and racial differences in intelligence explain quite a lot, they still leave some phenomena not quite making sense. Lynn resolves this in his new book, edited by Edward Dutton: Race Differences in Psychopathic Personality: An Evolutionary Analysis. 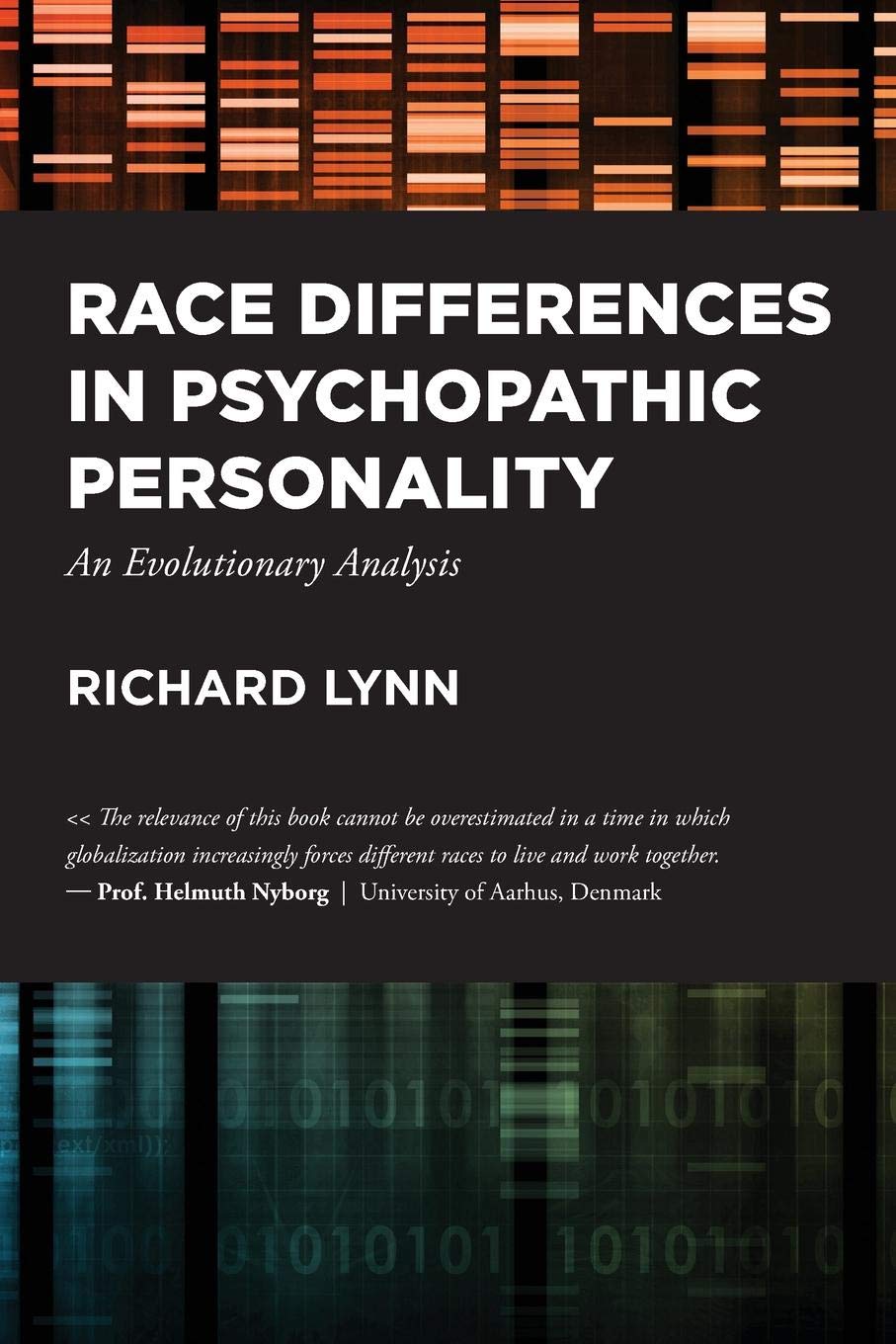 Thus, for example, Blacks of equal IQ to whites nevertheless still appear to be systematically more violent, more criminal, more sexually promiscuous, less interested in long term relationships and more prone to taking very serious risks with their own safety and that of others: speeding, driving while intoxicated, not wearing a seat belt. Clearly, IQ does not account for everything

Lynn says he was inspired to try to make sense of this by a comment from Richard Herrnstein and Charles Murray in The Bell Curve. They noted:

Some ethnic differences are not washed away by controlling for either intelligence or for any other variables that we examined. We leave those remaining differences unexplained and look forward to learning from our colleagues where the explanations lie.

For Lynn, this challenge was simply too enticing to resist. He wondered whetherâbecause different races are evolved to different ecologies in which the benefits of being able to create trusting and cooperative groups varyâthe explanation might lie in race differences in modal personality. Specifically, he wondered if there were consistent differences in the proportion of each race that expressed âPsychopathic Personalityâ (now officially known as âAntisocial Behavior Disorderâ) then the anomaly highlighted by Herrnstein and Murray would potentially make sense.

As Lynn explains in his new book, psychopathic personality is characterized by:

If there were race differences in the proportion of individuals having this kind of extreme personality, then the modal personality of different races would vary in the degree to which it was psychopathic. This would explain why, even when controlling for IQ, blacks would display noticeably more anti-social and risk-taking behavior than whites.

Lynn first took up the challenge in 2002, writing a paper on the subject, mainly comparing blacks, whites and Hispanics [Race Differences in Psychopathic Personality, By Richard Lynn, Personality and Individual Differences, 2002].

But for Lynn, the issue wouldnât be dealt with until he had tested it with as many of the âTwelve Races of Classical Anthropologyâ as possible. The result is Lynnâs new book .

Extremely data heavy, replete with numerous tables to make it easier to follow, Lynnâs new book seems to have a fairly simple objective, which it certainly achieves: to take us on a world tour of proxy evidence for race differences in psychopathic personality.

Lynn highlights race differences in organ donation: â43% of whites, but only 31% of Hispanics and only 23% of blacks were willing to donate their organs after death.â There are even race differences self-esteem: this being very high among psychopathsâ¦and blacks.

Based on all this, Lynnâs conclusion for the USA is that:

â¦psychopathic personality is greatest in blacks and Native Americans followed by Hispanics, lower in whites, and lowest in Asians, especially in Northeast Asians where data are given for these disaggregated from Southeast Asians.

He then turns to the genetics of psychopathic personality and explores why there would be race differences in personality from an evolutionary perspective.

There are, however, localized reasons for various exceptions to this pattern. The same increasingly stable yet difficult ecology also selects for intelligence, because you have to plan for the future and solve increasingly complex problems. Lynn summarizes his key findings on race differences in one of this bookâs many tables (Table 16:3) in which IQ is compared to PP (Psychopathic Personality):

Not for the first time, Lynnâs book is sure to infuriate the multiculturalistsâall the more so because it is scrupulously calmly presented, with all assertions very carefully backed-up by an abundance of data.

Science is unmistakably entering a New Dark Age. But we are reliably informed that the truth shall make us free.