Every few years, there seems to be a new outrage involving American Girl, the doll-and-book franchise. Having begun in 1986 with three marvelously designed storybooks and matching 18″ dolls (I was an early fan), the Wisconsin-based company was acquired in 1998 by Mattel, Inc. And after that the trouble began.

In 2005 American Girl was threatened with a boycott for contributing to a pro-abortion, pro-lesbian nonprofit organization called Girls Inc [Tweet them] [Conservative Groups Threaten to Boycott a Hit Doll’s Maker, AP, October 16, 2005]. In 2016 American Girl introduced an African-American doll with Caucasian features, and was criticized for “not accurately representing the African American culture and true African American experiences” [Why The New American Girl Doll Is Controversial, by Gabrielle Marie Simpson, Odyssey, March 1, 2016 ] And all along the company has been attacked for adding random black, Mexican, Chinese and Red Indian dolls for the sake of “diversity”âfor example, by me in 2017âthereby straying from American Girl’s original mission. You could call it a Great Replacement. 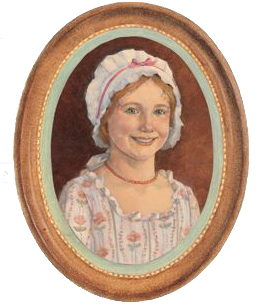 Initially, American Girls represented an approximate cross-section of Heritage Americans. We had Molly McIntire who wears plaid and lives in Illinois in 1944; Samantha Parkington, in the Hudson Valley, 1904; and Kirsten Larson, representing our immigrant Nordic community in 1850s Minnesota. Later a 1770s girl in Williamsburg, Virginia was added, Felicity Merriman, right. These dolls and books were eventually retired, five to ten years ago, sometimes replaced by 6-1/2″ mini-dolls and ugly new editions of the original books. (Some people made a fuss over Felicity because her family owned slaves. And they all seemed much too privileged.)

All the diversity you need!

American Girl has gotten used to protests and boycott threats. It usually responds by backpedaling, getting back to its rootsâfor a while. That year, as though to make up for all the new black and mestizo cast members, they added a wholesome-looking Country & Western doll vaguely based on the young Taylor Swift. As Taylor was noted for her ever-changing boyfriends, her avatar, “Tenney Grant,” got a boyfriend too, American Girl’s first-ever boy doll. (There are several now.)

But now we come to the biggest, latest, weirdest controversy. It’s all about a strange little 96-page cartoon book called A Smart Girlâs Guide: Body Image. It sells for $12.99 online. I gather it’s now thought too incendiary to be displayed in the American Girl stores. 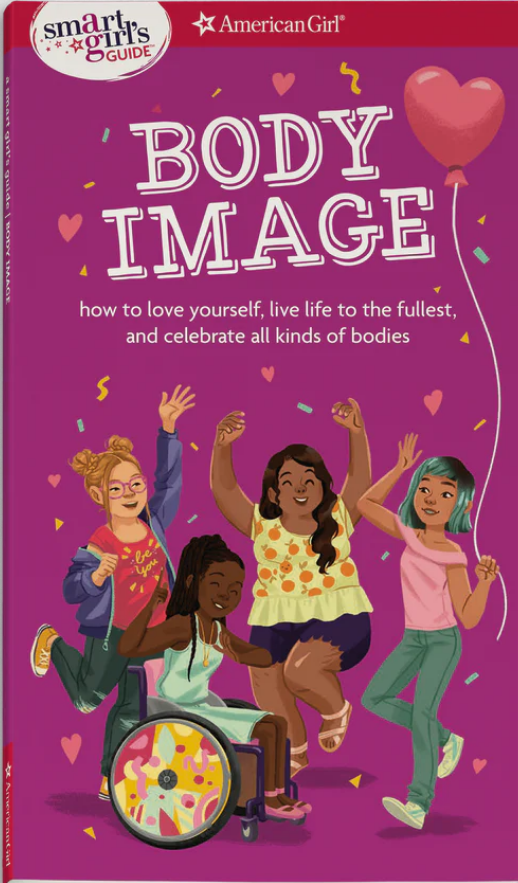 The Body Image book features drawings of grotesque and blue-haired youngsters with body-image problems. We get obese Girls of Color, wheelchair-bound Disabled Girls of Color, people of uncertain race and sex…and finally, what really triggered the tabloid press and “conservative” media…young People of Color who want a sex change.

âIf you havenât gone through puberty yet, the doctor might offer medicine to delay your bodyâs changes, giving you more time to think about your gender identity,â a page of the text explains alongside an illustration of a Pre-teen of Color consulting with a Bengali physician. The reader is then advised that he/she can start on puberty blockers without her/his parents finding out. 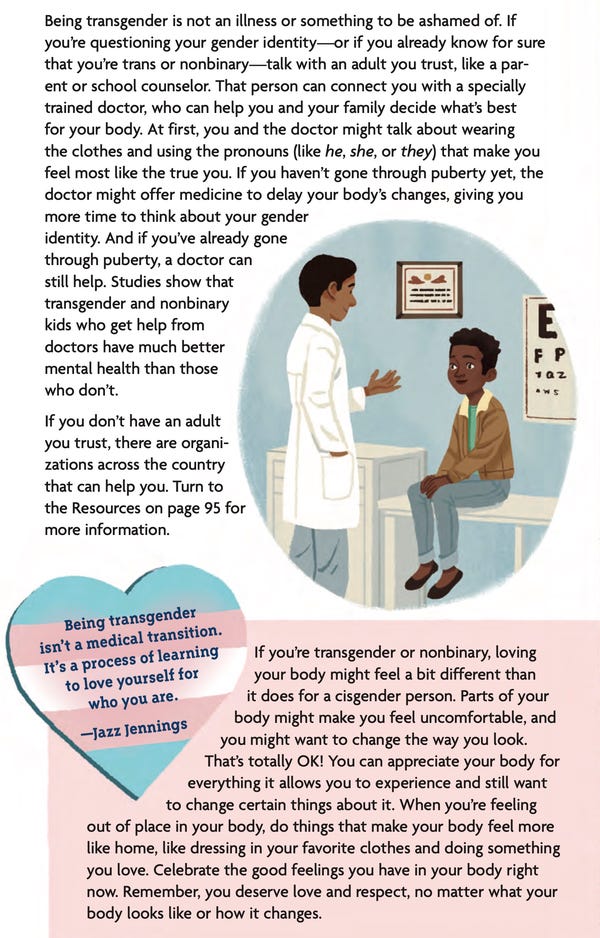 It appears the American Girl people have their books packaged by a third party, and don’t actually read them. Because when the outrage started, the AG front office acted completely bewildered:

Julie Parks, a spokesperson for the company, told USA Today that no other American Girl book has ever received similar criticism. She said âBody Imageâ is the first American Girl book to address gender identity and expression.

I should expect it is! And of course it drew a lot of flak. “Gender identity and expression” is a safe and permissible target in Conservatism Inc. media these days. It’s bizarre and lurid and most people never meet up with itâbut it’s a great attention-grabber. Tucker Carlson does about two segments a week on it.

Meantime, substantive matters of “Race, Diversity and Inclusion,” which affect society at large, are verboten, almost entirely off the table. 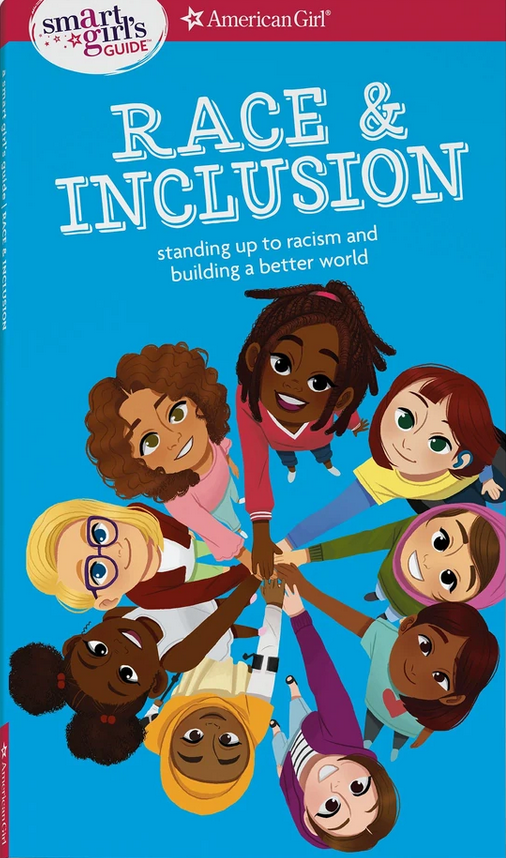 The outrage over the Body Image book is mainly a distraction, a proxy for the bigger things that can’t be said.

But Newsmax host Rob Finnerty gave the real game away on December 12 when he reported that he went into the flagship American Girl store in Rockefeller Center and couldn’t find a cute little white doll that looked like his 6-year-old daughter. Predictably the whole Leftist borg on Twitter, led by Media Matters for America, came down on him, called him a liar:

Not only a liar, but evidently racist as well, since Finnerty was bothered by the presence (the predominance?) of nonwhite dolls when he visited the American Girl store.

The rebuttals, on MSNBC and elsewhere, all had the same talking points. First they’d show us an unrepresentative page of the American Girl online catalogue, where most of the dolls were lily-white.

Then they’d display a promotional photograph from the company, indicating the wide diversity of the American Girl range. Which rather contradicts their first point: 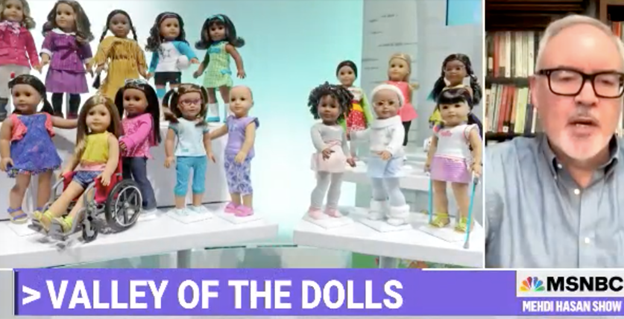 There appears to be even a Karine Jean-Pierre doll in there. Anyway, our tweeter, or media-host-of-colorâin the case NYU law professor Melissa Murray [Tweet her] will tell us, over and over, that when she was growing up, there were no dolls that looked like her; no Dolls of Color whatsoever! [The GOPâs Newest Culture War Target: American Girl Dolls,, MSNBC, December 21, 2022]Demonstrably untrueâdolls of color have been a thing since the 1960sâbut let it go.

Newsmax’s Rob Finnerty may have been guilty of slight hyperbole, suggesting there were no cute little white dolls in the shop when he strolled in there last month or last summer. But it’s an understandable impression, one I’ve often had when going by the American Girl store in Manhattan. (I live nearby and have to walk past it all the time.) 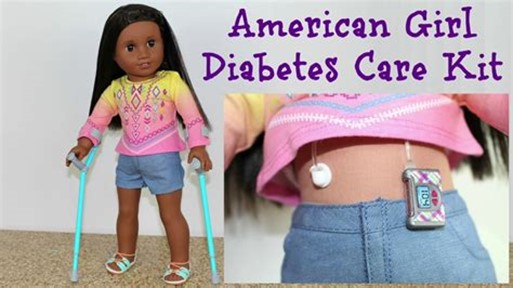 However I’m happy to say that after all this recent media ruckus, the American Girl store in Rockefeller Center has cleaned up its act. I spent some time there just before Christmas and couldn’t find a single Body Image or Race & Inclusion book.

In fact there were almost no books at all. They used to have a book section, but now it’s gone. Too many complaints, too many protests?

And all-American girl dolls predominated once again at the American Girl store. Though maybe that’s just for the Christmas season, and they’ll soon be back to their old tricks.

Below: a Volkswagen called SFGIRL, property of 1970s historical character Julie Albright from the days when the phrase “California Girl” actually meant something. 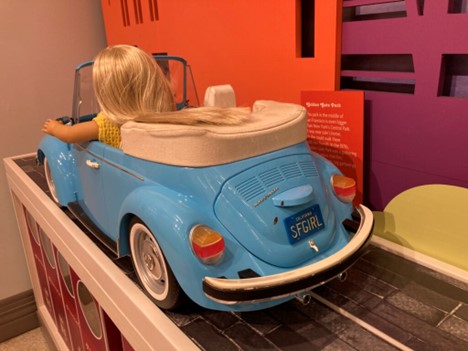 Jane Weir (Email her) is an American Girl living in an American town in the 21st century.

Subscribe to All Jane Weir Comments via RSS
PastClassics