Stephen M. Walt (l) and John J. Mearsheimer, at the time of the publication of The Israel Lobby in 2007.
◄►Bookmark◄❌►▲ ▼Toggle AllToC▲▼Add to LibraryRemove from Library • BShow CommentNext New CommentNext New ReplyRead More
ReplyAgree/Disagree/Etc. More... This Commenter This Thread Hide Thread Display All Comments
AgreeDisagreeThanksLOLTroll
These buttons register your public Agreement, Disagreement, Thanks, LOL, or Troll with the selected comment. They are ONLY available to recent, frequent commenters who have saved their Name+Email using the 'Remember My Information' checkbox, and may also ONLY be used three times during any eight hour period.
Email Comment Ignore Commenter Follow Commenter
Search Text Case Sensitive  Exact Words  Include Comments
List of Bookmarks 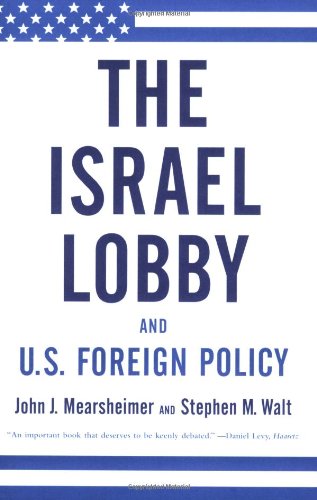 The authors of The Israel Lobby went on Chicago radio station WBEZ last week to reflect on their achievement after ten years. No, not 60 Minutes. Not The New York Times. Not MSNBC. But WBEZ radio.

It is a great interview by Jerome McDonnell about a stupendous achievement. As I wrote ten years ago, this book is up there with Rachel Carsonâs Silent Spring, Upton Sinclairâs The Jungle and Ralph Naderâs Unsafe at Any Speed, as a bombshell that will help transform society.

Below are some choice bits from the interview.

Publication ruined both menâs chances to serve in government or in university administration. Mearsheimer:

Mearsheimer was then 59 years old and in Chicago. But Steve Walt was a sprightly 50 and on I-95, on the Harvard springboard to presidential elbows. The book forever changed his horizon:

I was academic dean in the Kennedy School. I think itâs fair to say that both universities did stand by us in the sense that they didnât put any formal censure on us. There were various ways of what you might call informal marginalization at least for a while, because the leaderships in both universities were very nervous about the fallout. Universities donât really like controversy very much.

I did understand that this was probably going to eliminate any possibility of government service in my case, which is something I do regret, because itâs something I would have appreciated, had that opportunity presented itself at some point down the road.

Walt went on to say that they had to do it. âIf we werenât willing to do that, then hardly anybody else would be. We couldnât lose our jobs. We didnât necessarily need government employment to pay the mortgage.â

The two men actually gave up on the article and book years before it was published because doors kept closing. Here is some of the history.

Mearsheimer spoke about the idea first at the American Political Science Association meetings in Boston in 2002; and a friend said the Atlantic wanted to commission an article on that very subject. The Atlantic magazine assigned Walt and Mearsheimer in 2002. Then it got cold feet and killed the piece in early 2005. At that time, Walt said, the two scholars thought that no other outlet in the United States would publish it, but they could flesh it out as a âshort book,â so they consulted a ânumberâ of publishers and a couple of literary agents.

We got what you would call polite interest but nothing you could call enthusiasm. At one point we basically decided to drop the project entirely.

After that, though, an editor who had a copy of the piece showed it to a scholar at UCLA who reached out to Mearsheimer and said the London Review of Books might be interested. The LRB version was eventually published in March 2006, and âprovoked an immediate firestorm,â Walt said.

Ironically once it provoked that firestorm, suddenly publishers and literary agents recognized that there was a product people were interested in and suddenly they were contacting us and offering us book contracts.

Mearshimer said it was the internet that published that piece as much as the LRB:

Rashid Khalidi at Columbia University told me that the morning after the piece had hit the internet, 14 different people had sent him a link for the piece. It was such a big bombshell.

I donât think weâ or anyone elseâ has had much influence on policy. I think the lobby is still as powerful as ever. Itâs now more out in the open, and thatâs not necessarily a good thing for a lobby, but itâs still remarkably effective. This is why you saw all those Republicans falling all over themselves in the 2016 Republican primaries to say how devoted they were to Israel, because they understand that you donât want to cross the lobby.

Or to put that another way: This interview was not on 60 Minutes, MSNBC, or the New York Times!

Off to a Diverse Start
Biden Doubles Down on Some Bad Policies and Appointments
Philip Giraldi
• 185 Comments • Reply
← Bill Making It a Federal Crime to Suppo...The Never-Ending Crisis of Zionism →
Hide 113 CommentsLeave a Comment
"After Article Was Rejected and Publishers Yawned, Walt and Mearsheimer Dropped âthe Israel Lobbyâ in 2005"
• 113 Comments
Commenters to Ignore
Commenters to ignore (one per line)

← Bill Making It a Federal Crime to Suppo...The Never-Ending Crisis of Zionism →
Current Commenter
says:
Current Date at Time Now
Leave a Reply - Comments on articles more than two weeks old will be judged much more strictly on quality and tone
Cancel Reply
Commenting Disabled While in Translation Mode

Bumbling Towards the Biosingularity
Or, the Accidental Biopolitics of the Culture Wars
Guillaume Durocher • April 16, 2021
• 2,000 Words • 90 Comments • Reply