I am not in the least bit susceptible to depression, but I have to admit that as Tuesday night wore on, I found I was getting depressed. And on Wednesday I was really down. If you watch conservative media, you were expecting a red wave, and there was even talk of a paradigm shift as the GOP was projected to attract new constituenciesâsuburban Whites, Blacks, and Latinos were supposedly gravitating to the GOP. It would be a landslide. A paradigm shift that would ensure sweeping electoral victories for the Republicans for years to come.

Certainly anyone paying attention could understand why there would be a GOP tsunami: rampant inflation and a weak economy that may well slide into a deep recession; crime, especially by Blacks, in the big cities (conservative media was full of videos depicting horrible crimes, almost all by Black men); a completely open southern border (also prominently featured in conservative media and resulting in ~5 million additional illegals since Mayorkas got in and untold numbers of fentanyl deaths), a war in far off Ukraine (intensively pursued by the administration and resulting in pressure on energy and food prices); gender indoctrination in the schools; repeated examples of anti-White hate and statements of overt anti-White discrimination by prominent leftist activists and in the liberal-left media (often highlighted on conservative media, so this was not a secret); and a doddering, senile president whose personal popularity is in the tank and would presumably be a drag on the rest of the Democrat candidates.

But why should I be depressed given that the Republican Party is hopelessâat best a palliative that makes the patient more comfortable as he awaits certain death from an incurable disease? I think the reason I was depressed is because I was expecting some signs of a White awakening. If Whites ever needed cover for voting for a party that is repeatedly accused of being racist, misogynist, and generally evil, this would be a golden opportunity given all the negatives of the Biden administration. What White person in their right mind could possibly vote Democrat? Isnât it obvious to even the most casual observer that we need a change of direction?

But it didnât happen. The narrative held. The media in general is still all-in for the Democrats, so a great many people likely never heard about the southern border, or the many examples of anti-White discrimination and hate, or the huge spike in Black criminality, and they never heard about Bidenâs senility. They heard a lot about abortion and the GOPâs âwar on women,â and pro-abortion ballot measures won in several states and probably helped Democrats overall, as in Michigan where it probably helped the evil Gretchen Whitmer.

I should also mention that, even assuming there was no fraud, the Democrats obviously know how to game the current system, often with the help of laws they put in place making it super easy to vote. And they even engaged in dirty tricks like funding Republicans they thought, correctly as it turns out, who would be weak candidates.

And they heard a lot about endangered democracy, supposedly threatened if Republicans win elections (!). But this was likely an effective message because itâs a moral message (as are so many other messages during this cycleâTrumpian evil [fascist! insurrectionist!] being an obvious favorite). And if itâs one thing White people, especially White women, resonate to, itâs the feeling that they are an upstanding part of a moral community (I try to explain it here, Ch. 8). Itâs so comforting to know you are on-page with the NYTimes, NPR, and the college professors the liberal media trots out to give their talking points. White people wonât act unless they think itâs the morally right thing to do, and as always in the media age, the people who control the media create the moral communities. Jewish control of much of the media allows them to create the moral high ground that is absolutely compelling to a great many Whites.

Another factor was that Trump endorsed some marginal candidates as long as they went along with the 2020 election fraud narrativeâas emphasized by Ann Coulter. I agree the Democrats cheated (with a lot of help from the likes of Google biasing the news that people see). But letâs face it, itâs a losing issue now. Every news article in the liberal media and much of the conservative media that I have read for the last two years has claimed that election fraud is an outright lie, often repeated several times in the same article. Iâm not talking about op-eds, but about ânewsâ articles. Itâs never phrased tentatively but as an absolute, undeniable fact.

So the general consensus seems to be that Trump-endorsed candidates went down in winnable seats, but this is likely because of the success of the media in promoting the idea that only crazy people think the election was stolen. And the liberal media continued to spew hatred toward Trump as evil incarnate, the president to fomented an âinsurrectionâ to avoid his much deserved electoral defeat.

I certainly supported Trump in 2016 and 2020 even though he was far from ideal, and I would vote for him again if he gets the nomination. But his massive ego is now completely out of control, as seen in his recent comments on Ron DeSantis. 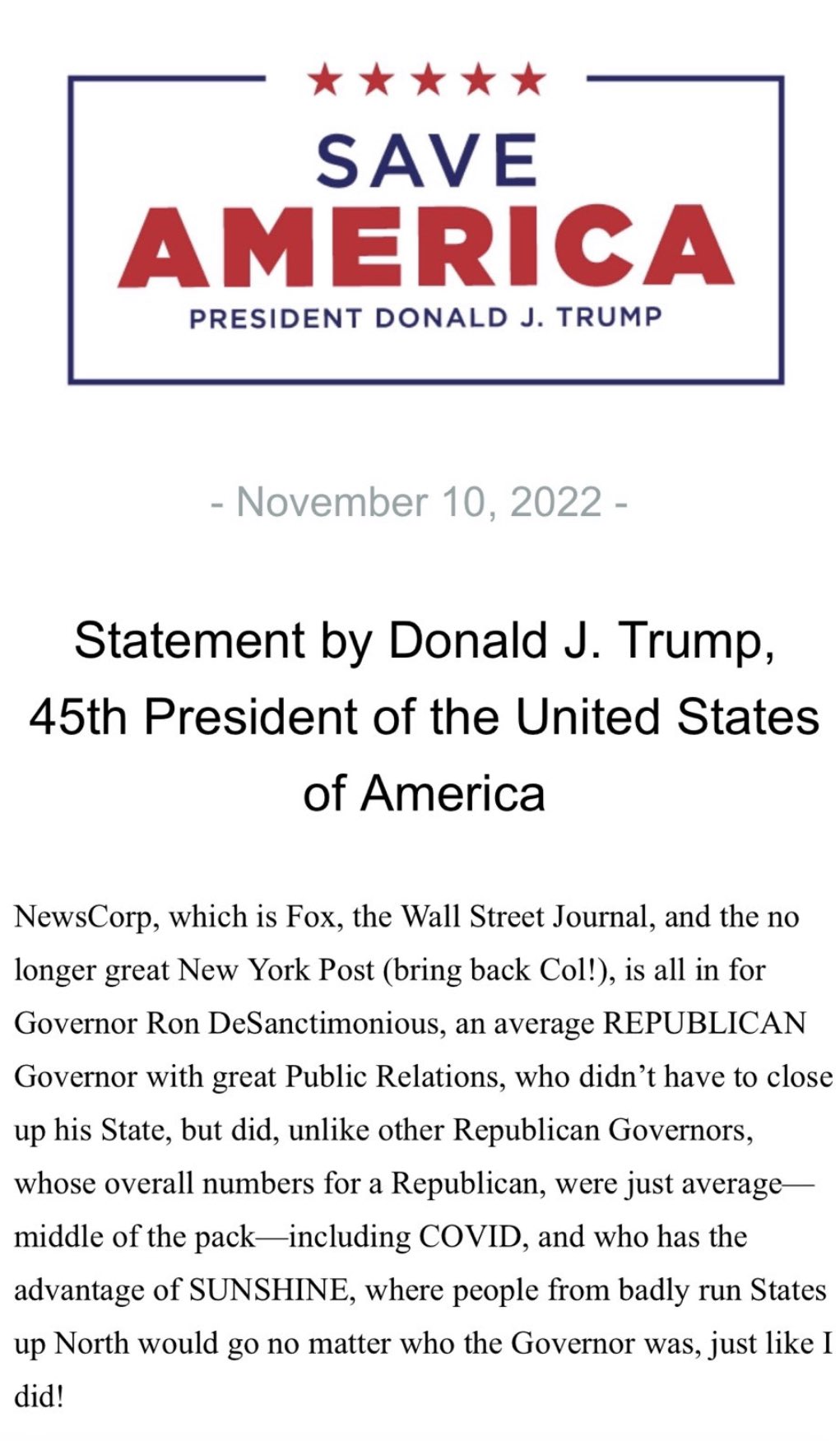 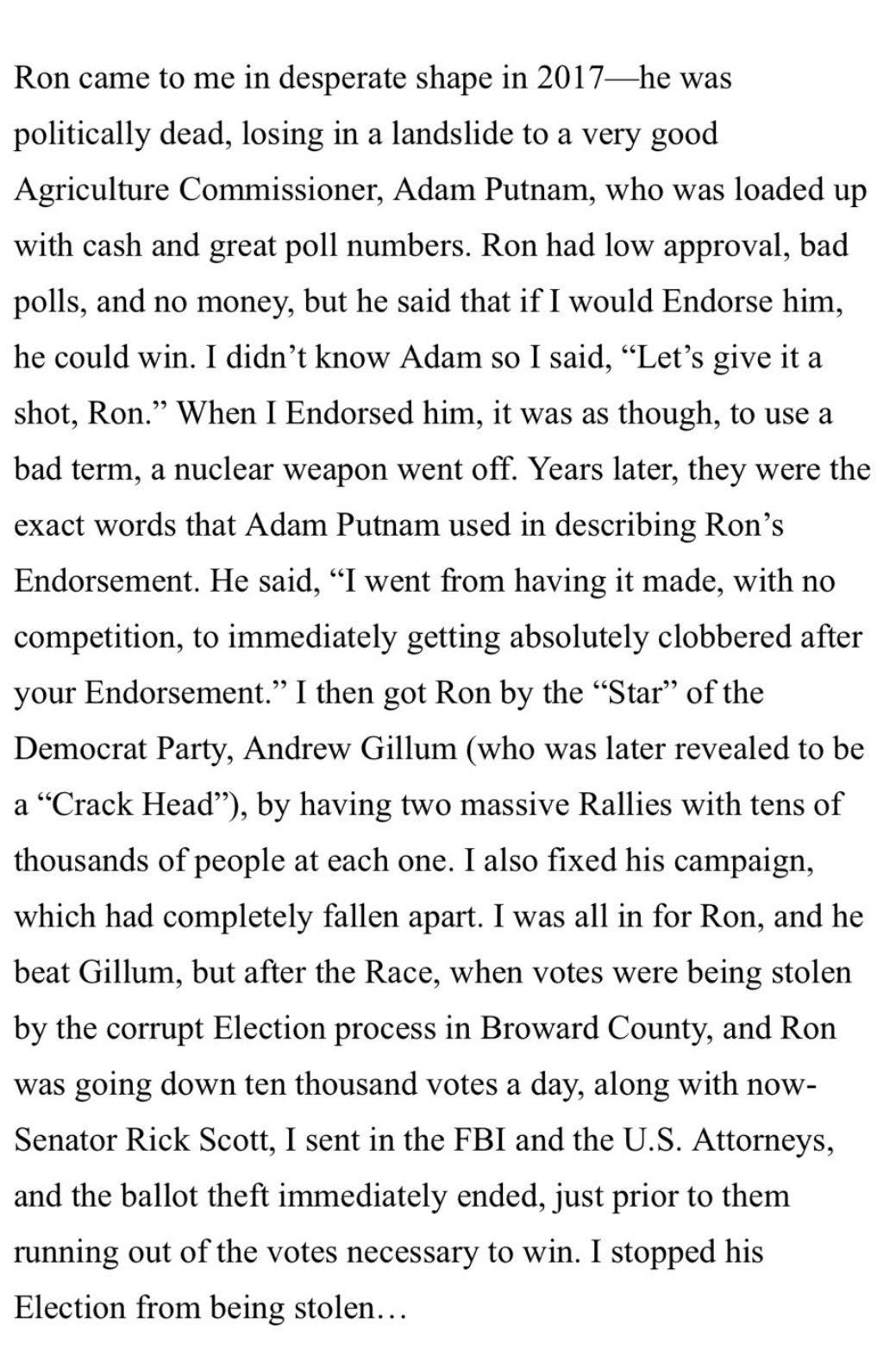 Notice thereâs no statement of principle here, only gratuitous disparagement and basically saying that DeSantis owes himâeven though DeSantis has never attacked Trump as far as I know. If Trump gets the 2924 nomination, the hatred would rise to fever pitchâan even more intense version of 2016 and 2020, when the media was blaring everything from Trump as the Second Coming of Hitler, to the Russia collusion hoax, to insurrection incitement and personal corruption blaring from the liberal media. The midterms clearly show that the elite media still has enormous influence and a Trump candidacy would be seen as an Armageddon moment for them. Pull out all the stops. Lying and cheating are completely justified.

But quite possibly a Trump nomination would be good simply because it would further polarize the country, if thatâs possible. Trumpâs everlasting contribution was to upend the comfortable neocon-Chamber of Commerce Republican establishment that would have given us unending Jeb-vs.-Hillary type elections. We need polarization, hopefully leading to a divorce. White conservatives have to get to the point where they realize that they canât win elections and that the GOP is a permanent minority party. (If the Republicans do so poorly in these midterms, you have to think it will be far worse in 2024.) At that point other solutions would have to be considered.

But a couple things from CNNâs exit polls (for Whites only).

Whites were overrepresented in the total vote (73%), with 58% going for Republicans, about typical for past midterm elections; so no awakening. As usual, there was a gender gap among Whites, 63%-53%, but with both sexes more Republican. And an education gap, with White women college grads skewing Democrat (56%-42%) and White male college grads skewing Republican (52%-48%), and non-college Whites of both sexes strongly favored Republicans. And there was the usual age gap, with younger voters age 18-29 (still influenced by the school system? youthful idealism?) skewing Democrat (58%-40%). All of these percentages should be increased because there are considerable numbers of people who are classified as White but do not identify with the European Christian-derived populationâJews, Middle Easterners, etc.

For Whites, marriage showed a big difference. In general, marriage is linked to voting Republican (63%). Unmarried White men are average White voters (58% GOP), but unmarried White women (20% of the White sample) are only 41% GOP. One envisions wine ladies, pro-abortion fanatics, and graduates of gender studies programs. And it reinforces the idea that White women are especially prone to the morally framed messages coming from the media they watch. White women college grads are a big problem.

A third of the White sample identified as a born-again or Evangelical Christian and skewed strongly toward the GOP (83%-15%), but the two-thirds who did not so identify skewed Democrat (54%-44%).

Try to wrap your head around that. The great majority of White peopleâthe one who arenât seriously religiousâtend to vote Democrat by a substantial margin. This a good indication of the hopelessness of the cause of getting White people to understand the need to start asserting their interests as Whites.

And of course, to make matters worse, the born-agains and Evangelicals are at best implicitly White. Their world view is foreign to racial thinking and they strongly support Israel and see Jews in a very positive light.

So in general, these results show that the great majority of Whites are still very much under the spell of the narrative being pumped out by the media and the educational system, and have no idea what their long-term interests are. Itâs all going to work out wonderfully, and we can all look forward to a harmonious, conflict free future.

The conclusion is that there arenât any more signs of a White awakening than have been evident in the recent past, despite all the reasons to further coalesce in the Republican Party. Like I said, depressing. The message of the dissident right is not getting through. And of course the demographics and the continuing hold of the establishment narrative on so many Whites means that things will just keep getting worse. Itâs become blindingly obvious that Whites canât or wonât find salvation in voting.

This limits the options: peaceful secession; civil war (resulting in unthinkable destruction and having to deal with a military that is already inundating their personnel with woke propaganda and purging dissenters); making alliances with some non-White groups that donât really share our interests; or going out with a whimper (what the establishment wants). I would love to see a successful secession movement but thatâs a long way off by the looks of things. Far too many Whites still accept the system narrative, and even the best talking heads in the media shy away from advocating explicitly for White interests or dealing honestly with Jewish issues.

Nevertheless, there are still parts of the country that are very White, very conservative, and very angry about whatâs going on. So a secession movement may take off, especially if the system shows signs of collapse. So, being the optimist that I am, I continue to have hope. The Change We Need Will Not Occur Until We Have Nothing Left to Lose
RockaBoatus
• 211 Comments • Reply
← Jewish Assimilation?
Hide 340 CommentsLeave a Comment
"A Depressing Election"
• 340 Comments
Commenters to Ignore
Commenters to ignore (one per line)