Evolutionarily-conditioned (instinctual) human fear hasn’t had enough time to be calibrated optimally to the contemporary threats humans face. That people so frequently drive immediately after waking up or while intoxicated without great concern are examples of signicant but historically recent dangers. Becoming scared while watching a horror movie is an extreme example of fear arising when no threat is present. Uneasiness in swimming in a lake or walking in the woods at night are primordial fears that serve little constructive purpose, assuming you’re not wading in the Everglades or hiking in the Rockies.

I’ve been in a bit of a dispute with family and friends over what I see as an issue of fear vestige. My neighborhood is at the edge of a town on the outskirts of the metro area, surrounded by brush and fields on three sides. It’s only a couple of years old, and several houses are being built near mine. Consequently, my unfinished basement has become a sanctuary for arthropods, especially spiders. They’re are webs all along the ‘step’ that protrudes a few inches from the drywall halfway down, and along the stairwell.

I enjoy seeing the little guys whenever I go downstairs. While most spiders are venomous, very few are threatening to humans. The effects of most bites are, at worst, similar to the pain suffered from a bee sting. Because cool, dark, and damp (I hang my wet clothes on clotheslines in the basement to dry) environs are a spider’s favorite, it is rare to see one upstairs where I live and sleep. They cut down on the population of insects that actually are pests, like roaches, moths, and termites. I live alone, and without any pets, so they’re companions as well. Hence, I’ve not done anything about them. 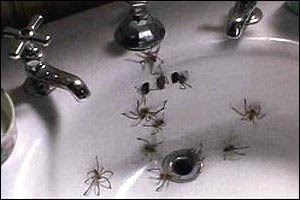 Those close to me are creeped out by it. They say it’s only a matter of time before I’m seriously bitten. Eastern Kansas has black widows, and more commonly, brown recluses wandering about.
One day when you go to grab a shirt, you’ll grab a recluse instead. What if they launch an organized assault, a la Arachnopobia?!

Maybe. But I’ve never been cognizant of a bite. Even the bite of a female black widow, the notoriously most dangerous encounter a person can have with a spider, is fatal in less than 5% of cases. I’m an active, healthy guy. The chance that I’d suffer from necrosis or even severe pain after being bitten by a recluse or a widow is minimal. Unlike a pit bull or rottweiler loose in the neighborhood (animals that are more likely to kill or injury humans than the most poisonous arachnids are), spiders are never aggressive toward people. Take a quick look at clothes, a towel, or your bedsheets before using them and you’re fine. Wolf spiders are my personal favorites, and there are lots of them on board. With a body the size of a quarter, they are about the scariest looking things you’ll ever see inside. While I like putting on the tough guy veneer, these beasts are a threat to both widows and recluses (and any other unfortunate bug they come across) but not to me. They’re the best ally a guy who deplores chores to keep the place pristine could have! As hunters, they are more mobile than ambushers or web spinners. A widow or recluse that takes to the floor risks being run down and devoured.

I have plenty of bug bombs on hand if the situation ever gets out of control.