Lowe on how the overclass has weaponized wokeism to the detriment of just about everybody else:

Crushing economic progressives under foot is the secret purpose of Wokism. So secret even its strongest adherents donât realize it, which is good because it means their adherence is sincere.

Gays, trans, blacks, and other misfits make for perfect footsoldiers for elites, because they can never stop being misfits. They are forced to be loyal. They will never stop shouting down progressive bourgeois and worker types who want universal healthcare, good jobs, whatever.

Thinkers of the past conjectured that democracy would fail because voters would vote themselves the money of the rich. Actually, poor demographics and the ideological preeminence of Bioleninism mean voters canât even vote themselves a $1200 payment! Contrast that with the rich, who have voted themselves infinite money through the central bank.

Wokism as practiced by our managerialist over-class, is not only the Hegelian synthesis of Marxism with capitalismâ¦ it is the brute Neitzchean triumph of the white/Jewish/Asian overman over the mass of the people.

Some do realize it. But there is little they can do with that realization. They are arguably even more susceptible to Wokeist attacks than those on the right are. There are only so many Dave Rubins and Michael Rectenwalds who are able to land on their feet after being tossed out by the Wokeists.

Chrisnonymous on the sentiment among a growing number of people that Covid is going to do it’s thing no matter what we do, so we might as well do our thing. Know your risk profile and act accordingly:

You can point to countries like New Zealand or Taiwan, but they are only gambling that no one will introduce it again. If they open their borders again, they will either have to (a) deal with it in the future or (b) suffer continuous recurrent lockdowns forever (which is its own way of learning to deal with it).

People donât seem to understand that there are qualitative differences between diseases like HIV, which it is entirely possible to stop transmission of and force to die out, and widespread, highly infectious respiratory diseases arising from animal populations, which it is not realistic to stop or eradicate.

If you think eradication was a viable strategy, you have to ask yourself why we havenât eradicated influenza or the common cold.

The only chance the world had was at the very beginning of the outbreak, but since the virus wasnât even recognized by the Chinese as a novel pathogen until it had already spread widely, that was probably not a realistic possibility either.

Haruto Rat on how violent crime in America really is wildly disproportionately black-on-black in nature:

As a quick thought experiment, what would the numbers look like if all races were equally violent and chose their victims at random: 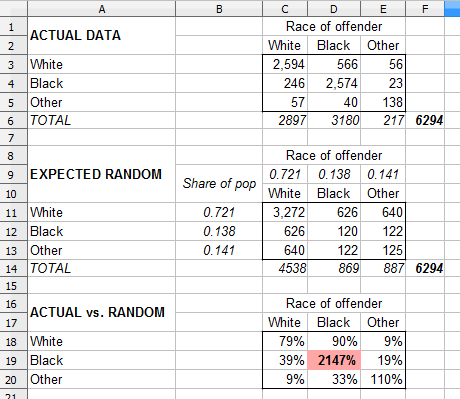 Itâs black-on-black murder that in reality occurs 21x as often. (Other-on-other is within margin of error, I also dropped âunknownâ from the table.)

The boomercon meme about BLM needing to focus on the south side of Chicago first is hard to argue with if black lives really are the movement’s driving concern. The Covidian Cult
C.J. Hopkins
• 306 Comments • Reply
← The Brown Queen: the Evolution of Unbre...Trump Dumps the Sailer Strategy →
Hide 36 CommentsLeave a Comment
"The Woke to Power"
• 36 Comments
Commenters to Ignore
Commenters to ignore (one per line)

← The Brown Queen: the Evolution of Unbre...Trump Dumps the Sailer Strategy →
Current Commenter
says:
Current Date at Time Now
Leave a Reply - Your comment will appear after approval from the schoolmarm. Racial slurs, dehumanizing language, personal identifying information, spamming, the advocation of illegal activity, or excessive profanity will not be approved. Approval of a comment does not imply endorsement of its contents by the authors of this blog or by The Unz Review.
Cancel Reply