Scrolling through Nintendo Wii’s old game offerings, I see Super Dodge Ball but not Nintendo World Cup. Both were Technos creations and used the same graphics engines. The costs of putting old titles on offer is negligible–sales must be virtually (heh) all margin.

The reason one is for purchase while the other is a no show? Political correctness, I suspect. Unlike revamped versions of old games with added features, the Wii downloads are unchanged from the originals. That way there is no cost for Nintendo associated with the re-releases. In this context, it means the teams a player has to face in each game remain unchanged.

In Super Dodge Ball, the American team faces the following, in ascending level of difficulty:

A majority of the teams are non-white. Of those that are white, two are cakewalks. Fittingly, the Soviets are the most formidable opponent, something that felt real enough when the game was released stateside in 1989. Today, though we wish more than anything that it felt real, it doesn’t. 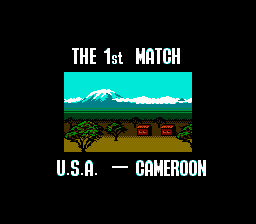 Even the pre-match graphic is insulting

The teams faced in Nintendo World Cup, again in ascending level of difficulty: The Germans have better huts

The game throws a bone to Latin America but Africa gets dumped on.

Cameroon, Africa’s sole representative, hasn’t even developed the pass! All the Cameroon players are capable of doing is trying to dribble from wherever they get the ball all the way to the other goal, even if it’s a defender who gets possession and even if he is swarmed by the other team.

Transitioning to sports-related things people actually care about, the NFL is in trouble. This is now the fourth consecutive year of ratings declines for the league, and tussling with Trump–from Ted Cruz to CNN--rarely does anybody any good. He has a talent for ensuring that his opponents always come out worse for the wear: The NFL won a big battle against Trump’s United States Football League in the eighties, but the war isn’t over!

Football surpassed baseball as America’s pastime decades ago. Consequently, it shows up near the partisan center of the following graph (that I recall seeing years ago in a Steve Sailer post I cannot currently locate) because of the sheer size of its viewership: 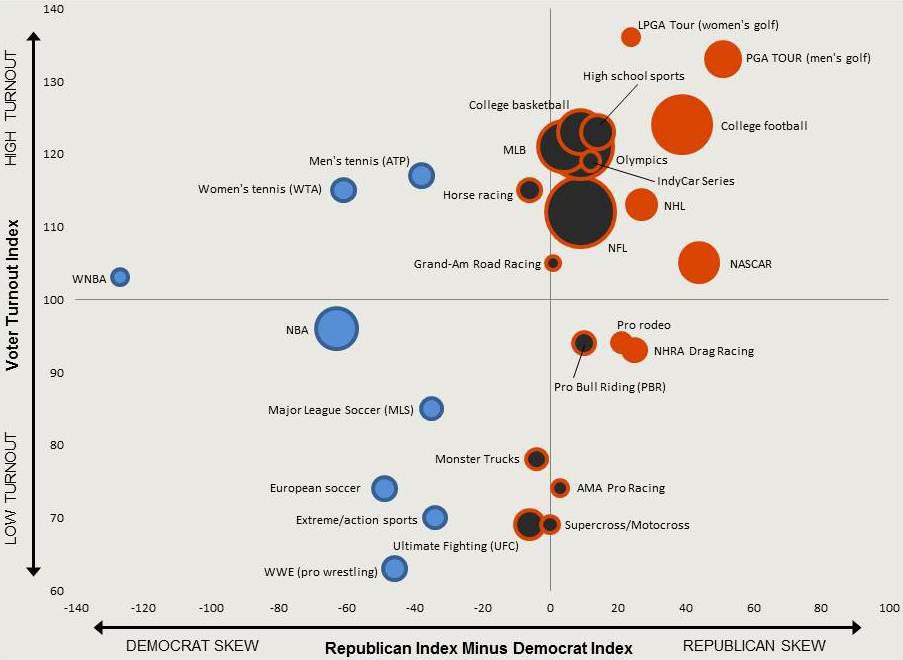 Remove blacks from consideration and the NFL bubble shifts to the right. Then, with respect to the 2016 presidential election, nudge it a bit farther to the right to account for blue collar whites who traditionally identify as Democrats but who voted for Trump (and correspondingly move the PGA bubble to the left to account for Republicans who look like Mitt Romney not voting for Trump), and we can see the threat this poses to the NFL.

NPR-listening SWPL-types have no love lost for football. They think its low-class and barbaric, and that its fans are crass and stupid. While they’re happy to highlight the riff to hurt Trump, they’re simultaneously coming after the league for something that could genuinely present it with an existential crisis if the nearly $765 million CTE settlement turns out to just be the beginning.

Sports are the true opiate of the contemporary American masses. If the upshot of all this is middle Americans frittering away less time–and more importantly, less tribalistic impulse–watching mercenaries smashing into each other so that the time and energy is freed up to do things like, say, make America great again, it’ll be a win.