One of the major themes discussed by Andrew Gelman in Red State, Blue State, Rich State, Poor State is how affluence tracks more strongly with the tendency to vote Republican in poorer states than it does in wealthy states. Since blue states are on the whole wealthier than red states are, this translates into a larger income gap between Republicans and Democrats in red states than in blue states. As affluence correlates with intelligence, the IQ gap presumably follows the same pattern.

In states like Massachusetts, liberal whiterpeople who vote Democratic and whose friends all vote Democratic think of Republicans as simpletons of a lower social class than themselves. And in the Bay State, that’s understandable. Gelman points out that this is a problem when those localized assumptions are projected across the entire country, because in other regions of the country, they simply don’t hold. In the South, the monied classes are overwhelmingly Republican.

There are no data tracking IQ and voting patterns at the state level. The GSS, however, does break respondents up into the nine broad geographic regions used by the US Census.

First, I should point out that during the Bush years, in aggregate Republicans are smarter than Democrats are (with IQ scores converted from Wordsum results of 100.5 and 98.6, respectively–independents are lower than either, at 95.3). This holds in every region of the country except for New England, where Democrats average 4.9 IQ points higher than Republicans do*.

But in the interracial status games whites play against one another, minorities are often invisible. Considering the same period of time, white Democrats are slightly more intelligent than white Republicans are (102.1 to 101.7, with independents at 97.6). A noisome Republican can use this to force a whiterperson into a politically incorrect corner where he has to choose between conceding that Republicans are smarter than Democrats are or admitting that the Democratic average is dragged down by its one-third non-white contingent.

Among whites alone, Republicans and Democrats differ in red and blue states. Following is a table showing Obama’s advantage among white voters and the IQ advantage (converted from Wordsum scores with the assumption the white mean is equivalent to an IQ of 100 with a standard deviation of 15) of self-identified white Democrats by region**. Only responses from 2000-2008 are included to ensure that what we’re looking at is contemporary: 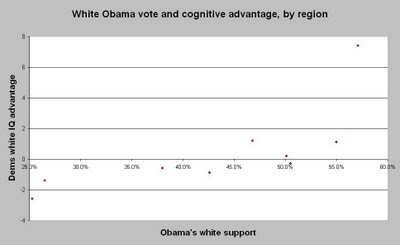 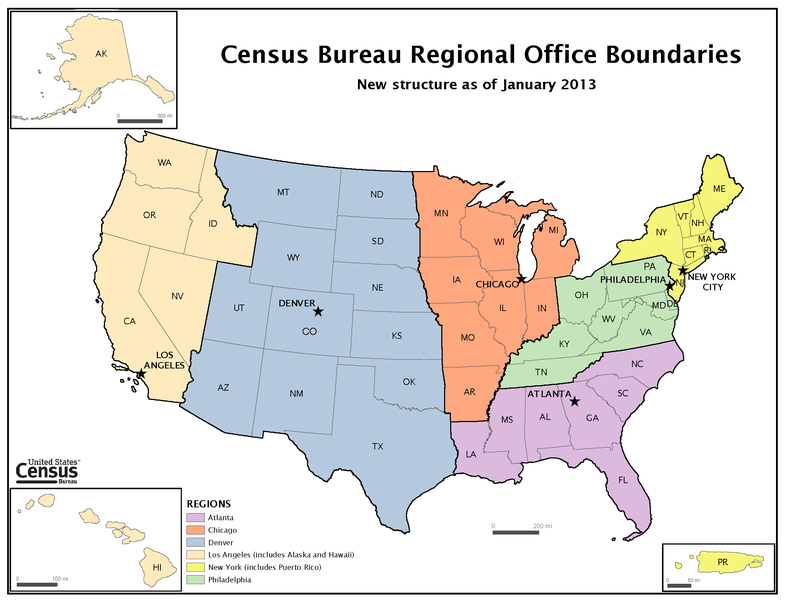 Bundling states into nine broad geographic regions isn’t optimal, because red and blue states are lumped together in varying degrees, especially the East and West North Central areas. That such a pattern is nonetheless apparent suggests that at the state level it is even stronger. This isn’t surprising. After all, it’s implied in Gelman’s book, as IQ and earning power are correlated at the group level.

* The Democratic IQ (dis)advantage by region for all races:

The only region that jumps out in surprise is the Middle Atlantic, which includes New York, New Jersey, and Pennsylvania. My guess is that many people involved in the financial industry from New York and New Jersey are Republicans, buoying the average. In the other direction, those three states are all heavily unionized, translating into lots of working class Democrats.

** To obtain white votes by region and compare them, I used exit polling data by state to obtain white percentages of each state’s total vote and multiplied them together. I then added up the total white votes for each candidate for all the states in a particular region to arrive at that region’s vote distribution for the 2008 Presidential election.