Ilkka Kokkarinen recalls the ozone hole scare that was part of popular parlance a decade ago, noting that it has essentially disappeared since then:

Another funny (both strange and ha-ha) thing that I recently realized was how the 90’s big scare of “ozone hole” seems to have vanished into, well, a memory hole. … You’d think that environmentalists would be screaming their lungs out for that one at every opportunity, but for some mysterious reason, they are as silent about the ozone hole as liberals and progressives these days are about Free Tibet, or for that matter, one of their most decisive victories of recent times, the democratization of South Africa. … Another, more cynical hypothesis might be that the ozone hole scare was just like every other green scare so far, a completely meaningless dud that was just a naked and cynical attempt to grab the power away from the masses and place it securely in the hands of an unelected, self-anointed eco-elite.

I vaguely remember hearing about ozone depletion and how I’d better where SPF 30 or higher sunscreen when I went to Oceans of Fun unless I wanted skin cancer before I finished high school, but haven’t heard about it at all since I’ve become moderately cognizant of the world around me (the last five years or so).

Quantifying the astute statements of others is a stock-in-trade, so I visited the New York Times‘ archives to do just that. There is scarcely any other major media publication that gives more attention to putatively anthropogenic environmental damage than the NYT does. “Ozone hole” provided too scant a return to be helpful, so I used the phrase “ozone depletion” instead. 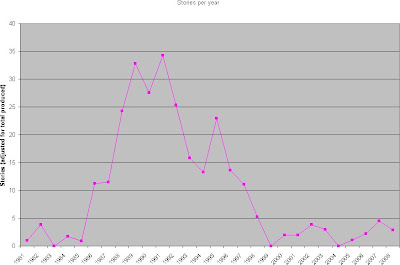 The nearby graph (click to enhance it) shows the number of articles, adjusted for the total number of stories produced over the entire year, containing the phrase from 1981 to the present.

Ilkka’s recollection is pretty accurate. Attention peaked in the early nineties and had subsided by the end of the decade. I suspect the focus on ozone depletion was replaced by “global warming” in the early part of this decade, a phrase which has since been (in the face of ten years of moderate cooling) replaced by the more nebulous “climate change”.