++Addition++Please see the comments section for Jason Malloy’s potentially devastating rebuttal to my conclusions, by way of pointing out that happiness among those with children comes primarily from marriage and not from having kids, and BGC’s contention that survey data on self-described happiness is of no real value.

Crucial to Dr. Bruce G. Charlton’s take on the underpinnings of sub-replacement level fertility in the West is the observation that women (and men) want to maximize their happiness, and contemporarily tend to do so in the pursuit of pleasure that does not involve the nuisance of offspring:

Low fertility is what happens when people seek to optimize their pleasure/happiness in life.

To put it another way (and in a generalization which includes men) a hedonistic life – a life of enlightened pursuit of satisfaction – will lead to extinction under modern conditions (although presumably under ancestral conditions pleasure-seeking would also have been fertility-enhancing on average).

High fertility in women who are able to control their reproduction is therefore not primarily seeking pleasure but is likely to be conforming to group pressure and/or to transcendental beliefs.

But are the barren actually happier than those who reproduce? Research on the question is mixed, but the GSS allows for additional insight surveys and studies have failed to tease out–the number of children, not just whether or not any have been birthed, makes a difference.

To avoid a skewed result from those who have not yet had time to start families, only the responses of people 30 years and older are included. The range of averages only represents about one-fourth a standard deviation. The differences are not huge, but the sample sizes are, and thus the patterns are real. The level of happiness (the higher the number, the greater general happiness is reported to be) by the number of children, for each gender (N = 15742 for men, 19187 for women): 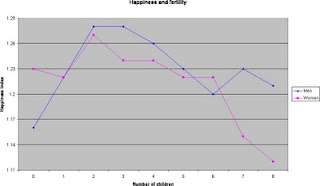 Mothers of two and fathers of two or three report the highest average level of general happiness. For as long as I’ve thought about it, I’ve maintained that I’d like to have three kids, but am willing to compromise at two. Seems reasonable enough!

While it’s said that men are more often the husbands of their wives than the fathers of their children, males get the longer end of the stick when it comes to procreation. Childless men are the least content of all, and fathers of large broods do not experience the same downtick in happiness that mothers do. In the traditional family setting, it’s not difficult to imagine why this is the case. Whether it’s two kids or ten, dad goes to work each day so he bring home the bacon each night. Mom is the one who really feels the added responsibility that each new addition brings. Also, to have lugged around an occupied womb for several years, cumulatively, must take a toll on more than just the skeletal system.

Moderation looks like the best course for women. Those who have never had children and those who have a house full of them both report lower levels of general happiness than women who have between 2 and 4 kids do.

It would be welcome for popular entertainment to portray DINKS as being more miserable than the typical couple with two kids. But that peachy portrayal of Sex and the City whiterpeople single life helps construct the cultural myth that children are an unwelcome anchor that weighs down those who have them.

Every Occidental country other than the US and Israel are bequeathing subsequent generations smaller than the ones that bore them. Of consequence are two major demographic shifts that carry implications of global importance.

1) The West is graying. The median ages in Great Britain and France are just under forty. Among the indigenous populations it has undoubtedly crossed that threshold, as is already the case for the entire populations of Germany, Italy, and Spain. These latter three European power players are all seeing more people die within their borders each year than are being born. Indeed, the population of the EU as a whole would be shrinking if it were not for immigration from South Asia, North Africa, and the Middle East.

2) It is also shrinking, relatively–and nearly absolutely. As Pat Buchanan states in Death of the West (p12):

In 1960, people of European ancestry were one-fourth of the world’s population; in 2000, they were one-sixth; in 2050, the will be one-tenth. These are the statistics of a vanishing race.

Where then goes liberalism, capitalism, science, and democracy? Are these foundations, upon which the contemporary developed world is built, moribund? In varying degrees, they find some refuge in East Asia. Yet the Orient, too, faces the same top-heavy, unsustainable demographic problems the West does. In Japan, South Korea, Taiwan, Hong Kong, Singapore, and even China, the total fertility rate is well below replenishment.

Readers of this blog have virtually all graduated from high school. So I’m raising the bar a little higher. If you have not already made it happen, plan to have at least a couple of kids. I would hate to see you fail not only yourself, but also your country.

Save ListCancel
Endorsed Only
Trim Comments?
← Politics, Religion, and Happiness (Ambi...Follow-Up on Happiness and Fertility →